This past weekend, Doug, Lanette, Karyn and I backpacked into the Seven Devils Mountains in West Central Idaho. The seven Devils mountains form the Idaho side of Hell's Canyon. They consist of seven peaks with various devil names, hence the name of the mountain range. I believe the official peak names are She Devil, He Devil, Tower of Babal, The Ogre, The Goblin, Mt Belial, and Devils Throne. There is also Devil's Tooth and the Twin Imps identified on the map. 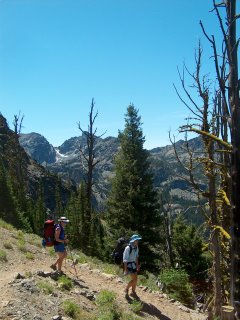 The trailhead starts out quite high at a place called Windy Saddle, 7600 feet above sea level. We start by heading downhill! The hike from the trailhead to our camping destination was 8 miles. The trail passes through a few drainages, essential gaining and losing 2600 feet to arrive at our camp at Gem lake, 7800 feet above sea level. In the picture at left you can see Karyn following Lanette around a switchback. She Devil is the rounded peak in the background, He Devil is just right of it hidden behind the dead tree. It was an interesting hike, providing beautiful vistas of the Seven Devils mountains and the Wallowa mountains far in the distance (the other side of Hell's Canyon). We found a dead pack Lama that had been in the heat for about a week (not a highlight). Not sure how it died. On a more positive side, we found a live Spruce Grouse with three chicks. 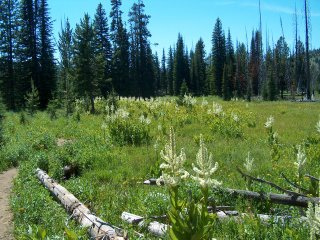 About 6 miles into the hike we climbed up onto a high ridge. The ridge provided some unique geology. High flat meadows (shown at the left) with a shallow lilypad lake. Getting a little tired from the hike, at about 7 miles we stopped at Basin Lake to get some fresh water. Continuing past Shelf lake to our destination, Gem Lake. We found a great campsite near the outlet of the lake. There was one group of campers at the lake already. That night it stayed very warm. Daytime tempuratures at this elevation were near 90 degrees (over 100 down in the valley). The low tempurature might have gotten down into the 60s, but not very far. On Saturday, Doug and I headed off to climb She Devil. The book said it would be an easy ascent, so we didn't bother to read the details nor bring the route instructions. If there was an easy route up, how hard could it be to find? We first hiked up and over the saddle to Sheep Lake. This was an even more beautiful lake than the others, but did have more bugs and two other camps. 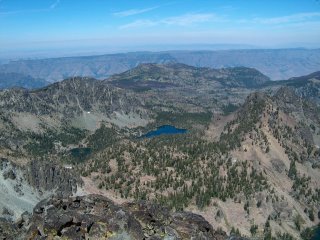 We picked a route to head straight up a loose scree field. Not my favorite. About a third of the way up, I suggested that we move over to the hard rock face of the mountain. This route provided firm hand and foot holds that I much preferred. We did worry about the descent as this was steep enough it would be very slow going on the way down. We made good progress and reached the top in about an hour and a half from Sheep Lake. The lake you see in the photo on the right is Gem Lake, where we were camped. The ridge in the lower right sits between Gem and Sheep Lake. 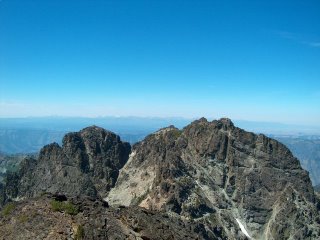 The picture on the left is of He Devil mountain from the top of She Devil. Due to a very large number of flying ants at the top of the mountain, we didn't stay long. What they were doing there, I have no idea. We chose the quicker route down the scree field for the descent. The top of the field consisted of very small gravel that made for quick and easy sliding. The gravel slowly increased in size, slowing our progress. We reached Sheep lake in about an hour. Up and over the saddle and back to camp in another 45 minutes. It was an excellent hike, but I was tired and sore. Spent the rest of the day eating, drinking, laying around, and enjoying the outdoors. On Sunday we hiked out. Enjoying the lighter pack, we made great time. In one old burn area we found a Hairy Woodpecker, some Northern Flickers, and what we think were Lazuli Buntings or Indigo Buntings (still researching). The drive down from the trailhead was depressing as we entered the 107 degree heat. We decided to go jump in the Salmon River before stopping for dinner. There was a moose in a small inlet off the river right next to the parking area. Keeping an eye on him, we jumped in the cool water. An excellent trip.

Hi! This is the first time I visit your site. You have a great site. I like it. Come see mine please, and let a message! I am glad to see you there.