On Monday morning I walked downtown to catch the bus to work. I took the usual route walking 15 minutes down to the coffee shop, enjoying my coffee for a few minutes before walking to catch the bus. As I stepped out of the coffee shop I heard the loud screeching of a juvenile Peregrine Falcon. At least I assumed it was a Peregrine. Dialing up the sound of the Peregrine on my Birdpod (Birdpod is a product that loads all of the bird sounds for your region onto your ipod), I confirmed the identity. Walking down the street, I saw three Peregrines fly overhead about three stories up. The third in the line was screeching non-stop. I watched them fly in and out between building until it was time for my bus to leave.

I have heard that we had Peregrine's nesting downtown for the last few years but, I haven't ever seen them. This week it has been hard to miss them.

On Wednesday morning I again walked down to the bus and witnessed another impressive flight display with the loud screeching echoing down the street. I could hear them from three blocks away. Boise is somewhat quiet at 6:30 in the morning! Last night we drove down to the parking garage to get some pictures. Here are a couple: 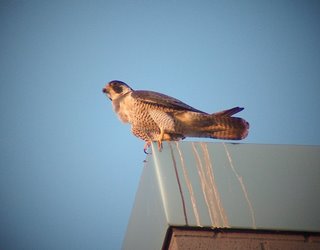 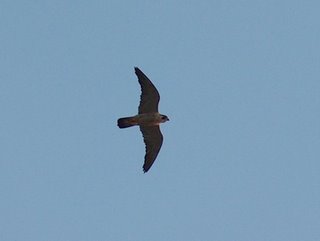 They flew around for 20 minutes or more before flying out of sight. We waited a while, but they did not come back. Karyn joined me this morning on my walk to the bus to watch the show. The three Peregrine's flew in to a perch and waited there until my bus left. A short while later, they put on a good flying show for Karyn. I plan to work on some better photos in the next few days.

UPDATE 8/24: We went out this evening. Counted four Peregrines. Confirmed that at least two are juveniles, but did not confirm the others. Here is the best shot of the evening: 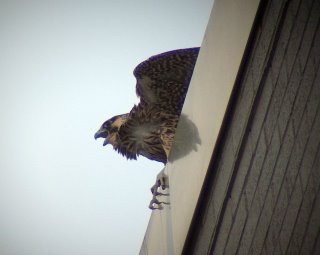 This article is featured in the I and the Bird #31 blog carnival.

I just happened to come across your blog while trying to identify a bird. It appeared on my deck this afternoon...i think it's a smallish juvenile raptor, but can't find anything for sure on the net to compare it to. Do you think you could help? ablackb1@cableone.net