Karyn and I returned from our labor day camping trip a day early so that we could visit the Idaho Bird Observatory on Monday morning.

We had conflicting information about what time we were supposed to be there. One item said sunrise and the other said 8am (about a hour later this time of year). Not knowing if we had to be precisely on time added to my over-obsession with being on time, we of course chose the earlier of the two. Our friend Julie decided to go along as well. The road to the observatory is a very steep road requiring a high clearance vehicle. The observatory is located on Lucky Peak (the mountain not the identically named reservoir in the bottom of the valley). We arrived in plenty of time to acquaint ourselves and head out on the first patrol. We found out that you don't have to be there at any particular time. The team begins work at sun up and works for 5 hours. 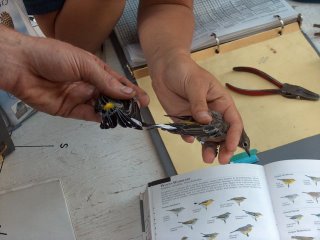 Yellow-rump Warblers (Butter Butts) (click to enlarge)The IBO project involves netting landbirds, weighing and measuring them, noting likely age, banding them, and then releasing them. All of the data is recorded for research and tracking purposes. The team has a series of eight vertical nets in the brush that catch the birds as they fly from bush to bush. Every 30 minutes the team will patrol the nets, removing any captured birds and placing them in cloth bags. They then carry the birds back to the research station where all of the measurements are taken. As an observer you are free to go on the patrols, or just wait at the station until the staff returns with the captured birds. The staff was extremely helpful in answering questions and showing the process. They even let us release some of the birds. 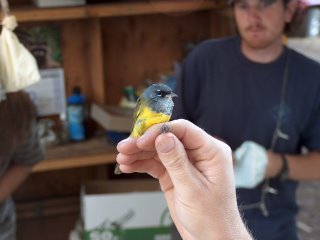 MacGillivray's Warbler For the first hour and a half it was just the three of us and the staff, providing lots of interaction and learning opportunities. About 8:30, the local chapter of the Audubon society showed up, decreasing some of our direct interaction, but it was still very educational. We stayed until 11:30 before return to Boise. 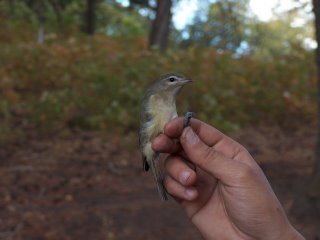 Warbling-Vireo Overall the experience was very educational from a bird biology, bird identification, and migration perspective. It was fascinating to see the birds up close and observe subtle differences that I would never notice in the field. The staff was extremely helpful in answering questions and providing their insight and perspective. While our entire experience was positive, I couldn't help but get the uncomfortable feeling that we were being too disruptive to nature. The staff took every measure possible to ensure the safety of the birds, yet they were being captured in nets and handled by people. This is the same feeling I get about wolves being collared and leatherback turtles being harnessed. I understand it is necessary for us to help the species as a whole, but it is still obtrusive to the individual. I dream of a day when this is not necessary.

All in all, I would definitely recommend this experience to others and I plan to participate again myself.

The IBO also has a hawk watch program which is just ramping up for the fall and an owl watch program. We hope to participate in these as well.