The Future of Life by Edward O. Wilson 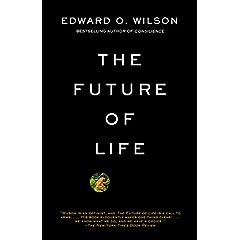 I just finished listening to E.O. Wilson's "The Future of Life" on my ipod. This book presents the case for urgent action to save the remaining environmental diversity of the planet. E. O. Wilson's unique witting style is entertaining (the introduction is written as a letter to Thoreau) and extremely compelling as he uses strong scientific examples to make his case. The book jumps around a fair amount and covers a wide range of topics, but that is part of what makes it so interesting.

Wilson covers one topic which seems to be off limits for most writers.  The second chapter of the book discusses the human population trends and how unsustainable it is for the planet. How most of the world, except the United States, is trying to address population growth issues.  This is a topic that I spend a lot of time thinking about. I fully agree with a statement in the book that population control is the only chance the human race has to survive.

Wilson spends a lot of time talking of species preservation. If you have read this blog for long then you know that species preservation is a particular interest area of mine. Wilson speaks of many species in their last grip of survival, of the extraordinary effort of scientists to keep their species alive. Efforts like we experienced in our EarthWatch trip - Saving the Leatherback Turtle. This refreshed some of my thoughts on species preservation. I absolutely believe that we should work as hard as we can to preserve species in natural habitat. The only way to accomplish this is to preserve enough natural ecosystems to sustain them. The limited work we did with the Leatherback turtles absolutely helped their survival, but it also interfered with natural selection, possibly damaging the species for ever. Some of the extraordinary measures that Wilson describe in the book are keeping some species from going extinct, but also interfering with natural selection. If this type of support is carried on for too long, then I postulate that the species will evolve to depend upon it. When is an artificially  sustained species no longer considered the original species? But I digress. The book in an excellent, thought provoking work on species preservation.

Unlike many of these books, E.O. Wilson finishes with a chapter of hope.  He celebrates actions currently underway throughout the world.  He proposes a way to step up the results. To put the cost in perspective, he states that huge accomplishments could be achieved for as little a 1 cent per cup of coffee consumed in the world.   Think about that while drinking you next 4 dollar latte! and buy the book.