(Click Photos to Enlarge)
Another day of bird watching in Boise. I took in some cross country skiing this morning before heading out this afternoon to take some photos along the river. We were looking for bald eagles, but none were to be seen. We did see some interesting stuff. Here you see what I believe is a song sparrow. Sparrows are still tough for me. Not necessarily an exciting bird to find as they are quite common, but the picture came out quite good, so I though I would share. 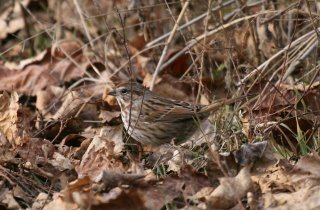 Upon approaching the river, I scared up a group of Common Goldeneyes (not necessarily common here, but that is their name). I had to sneak down the river to get this shot. 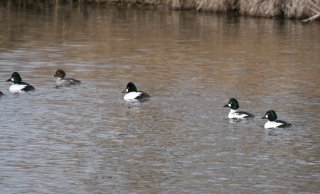 One of my favorite birds chose to put on a show for us. Here are a few Hooded Mergansers. I learned something today. Most of the head shape of these birds is made up of feathers. It surprised me when one of them folded down their head feathers. I had just assumed their head was shaped that way. 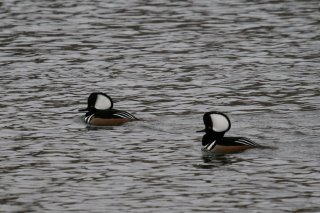 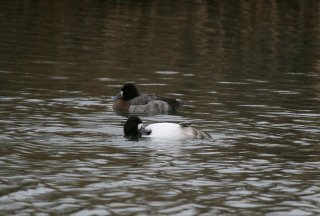 On Christmas day, Karyn and I drove out to Wilson Ponds in Nampa for some bird watching and to get some more time using our joint Christmas present to each other - the 100-400mm lens for our camera (yes, we did cheat and use it for an earlier post as well!).

A report that I had received a day before indicated a high level of bird activity at the ponds. Contributing to the normal activity was the fact that the fish hatchery had released a number of fish into the ponds, causing a large increase in gull activity. 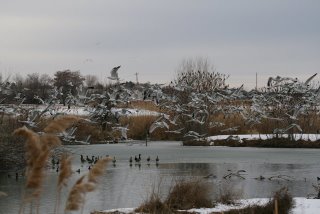 Upon our arrival, there were birds everywhere. We originally the birds in the photo on the left might be Greater Scaups, but an earlier report of Lesser Scaups forced me to study the details more carefully.  While not 100% sure, I now classify these as Lesser Scaups.

As you can see in the picture on the right, there was a great deal of gull activity. I have identified a number of these as Ring-billed Gulls, but I am sure there are some others mixed in as well. We watched as the gulls would dive in for the fish. I watched one pull a fish out of the water, only to fumble it as tried to fly away. We watched a number of failed attempts as well. 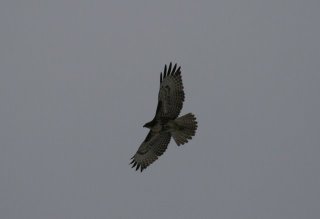 A Redtailed Hawk graced our presence for a while as it flew circles over head. 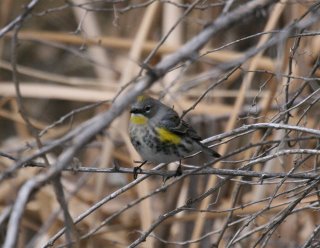 The surprise of the day, at least for me was a group of Yellow-rumped Warblers.  I expected all warblers to have vacated the area months ago.

A couple of our favorites - Belted Kingfisher and Pied-billed Grebe were also present.

After years of digiscoping (taking digital photos through our spotting scope), we finally broke down and purchased a digital SLR camera for photography. We now use a Canon Digital Rebel XTi, with a Canon 100-400mm lens.  It clearly doesn't qualify as a pocket camera! So far we have been very impressed with the image quality and even more impressed with the speed of the camera. The ability to take 28 shots in a row, 3 frames a second, is an excellent capability that we didn't have before. The focus is right on, even for motion shots. We have taken some good sequences of birds flying. 20 shots in a row, all of them excellent while panning. When buying the lens I was sure that we would have to tripod the camera to use it at all. Not true.  Most of the shots below were taken at 400mm hand held!  It was definitely a good investment! 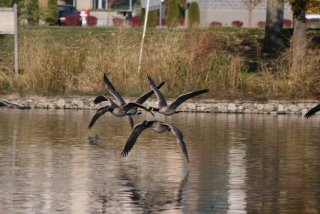 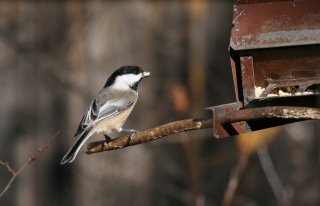 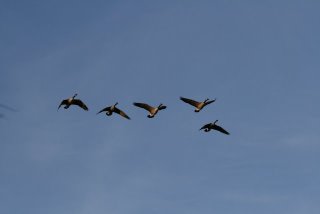 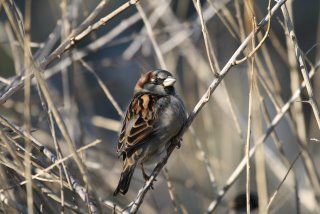 I haven't published any posts on the election results in November. This is primarily due to my disbelief in Idaho moving more conservative as the rest of the country moved more towards the democrats. This shouldn't come as a surprise as our state has the second highest presidential approval rating, still above 50%. But that is not supposed to be the topic of this post.

In a recent newsletter from the Coalition for Regional Public Transportation, a group which I have the honor of representing my company in, I learned of many successful ballot measures for public transportation across the country. Unfortunately, there weren't any in Idaho. Yet.

Across the nation, $40 billion in new public transit funding was approved. Voters in 13 states approved 21 of the 33 ballot measures, including 7 statewide initiatives.  This provides me hope for the future of the Treasure Valley of Idaho. As I have mentioned before in this blog, Idaho is one of only 4 states which provide no state funding for transit and restricts local funding of transit - Hawaii, Alaska, and Mississippi are the others. The coalition is working with the Idaho legislature to allow local option funding. This isn't an initiative to raise taxes, its an initiative to allow us to ask the citizens if they want to pay for public transit. Today in Idaho, we can't even do that.

If we are successful in this legislature, in November 2008, we will get to vote to approve our own transportation system expansion.

Today was an interesting transit day for me. The double Christmas Whammy hit. The bus service runs slower the week before Christmas as many bus routes converge on the mall. The traffic in and out of the mall, delays the buses through the day. We were also hit with a mid-day snow storm. The result - I waited 35 minutes in the snow for my bus. Since the bus only runs once an hour, it greatly limit your options.

Last week I traveled to Bangalore India on a business trip.  It was a trip that I had put off for about a year, but it was finally time to go. I don't really like to travel. Upon scheduling the trip, I received no less than 8 warning email from our corporate travel department about the "high risk" nature of India.  What did I get myself into?

The trip preparation began with a visit to the travel nurse that was very successful in scaring the crap out of me. Shots, pills, water filters, emergency evacuation instructions, and instructions like "don't wear any jewelry or you will be robbed." It seemed as if I was stepping off the edge of the planet instead of visiting the world center for corporate IT.  How could I travel on a packed 747 airplane to a city where my company employs over 20,000 people, and be at such high risk?  In the end, I wasn't mugged or murdered, I didn't get food poisoning, I didn't get run over by a car or bus (this is amazing), and so far no signs of long term illness.  Maybe it was the preparation, maybe it was over hyped risks, but I am not complaining.

The trip was very worthwhile from a business perspective, but I want to highlight a few of the cultural observations. First, the traffic was absolutely fascinating. Complete chaos. I would not have survived behind the wheel for more than a minute. Red lights apparently do not mean you should stop, but instead that you should honk your horn as you drive through.  Bikes, motorcycles, buses and cars going in every direction with no semblance of rules. I was sure that a bicycle I was watching was going to be wiped out.  This repeated itself multiple times each day. The riders didn't even react to the dangers I saw so apparent. Another individual I was traveling with pointed out that if we were on bikes we would flinch and it would all be over. The system appears to work if no one flinches at the risk.

One day I looked out the car window as a motorcycle rode by. A woman sat side saddle on the back and held an infant with one arm. The motorcycle edged between two buses taking what seemed to me as unbelievable risks. It dawned on me that in America the infant would have to be in a certified child seat until he or she weighed 60 pounds. Are the Indians incredibly bold, or are we incredibly wimpy and paranoid. Does this mentality play out in their culture and their world innovation?  I don't know how it couldn't.

The other observation I made was the divide between the accelerating high tech boom and those that are left behind. One block from our place of work, was a small vacant lot. On the lot there were hundreds of people.  It was clear that they lived there with no shelter in the most cramped quarters I have ever witnessed. They looked hungry, in some cases starving. Children ran around naked. The lot stood out in sharp contrast to its surroundings. It opened my eyes to the fact that even in a location where hundreds of thousands of jobs are being insourced (outsourced from US and other countries), there are still those that are left behind.

Interesting note: I only learned on my return trip that the city of Bangalore is planning to revert its name back to its historic Indian name of Bengalooru.

I subscribe to the Idaho Foodbank's newsletter. Last week they published an interesting article about Oregon's increase in this minimum wage.  In 2002 Oregon votes passed an increase in the minimum wage which is also annually tied to inflation. Two interesting points speak for themselves:

Last year the Republican dominated Idaho Legislature refused to consider the increase. Through some maneuvering the bill was provided an hour long discussion before being voted down in a landslide. It comes as no surprise that we are still the 8th hungriest state in the country.

I have written before about trophic cascade, specifically the research regard wolves of Yellowstone. Trophic cascade refers to the situation where the lack of a keystone predator has cascading consequences through the ecosystem. These cascades can ultimately impact species we would normally think to be outside the realm of influence, but the connections are eventually made. A new study has been published regarding the lack of Cougars in Zion National Park. Here is the full press release: Cougar predation key to ecosystem health.

The cascade extends far beyond the direct connections with deer and cottonwoods (what deer eat),  "It's the decline or disappearance of shrubs, wetland plants, amphibians, lizards, wildflowers, and even butterflies."  All can be linked back to the lack of the keystone predator - Cougars. The challenge here is that it cannot be resolved by simply reintroducing cougars.  Cougars have been chased away due to human activity.  This is an important lesson on the importance of maintaining intact eco-systems with a full complement of wildlife. As human intrusions further segment the wild lands, I expect we will see much more of this.

These local studies are only indicative of what has happened and continues to happen all over the planet. The World Wildlife Fund has recently released its latest Living Planet Report.  This report covers two indexes, the first is the Living Planet Index. This index reflects the health of the planet’s ecosystems.  This index has fallen by 29% in the past 30 years, indicating a 29% reduction in populations of terrestrial, marine, and freshwater vertebrate species. The second index is the Ecological Footprint Index.  This index indicates how much regenerative capacity is required to turn our waste back into resources. As of 2003, we are producing 25% more waste than the planet can possibly process.