I just completed round two of my summer of various field jobs (six different projects through the end of October). This round included 12 days of work surveying for Northern Goshawks (Accipiter gentilis) in the Minidoka Ranger District of the Sawtooth National Forest (Figure 1). Over the previous two weeks I spent time in three of the five divisions which make up the Minidoka Ranger District - the Black Pine Mountains, the Sublett Mountains, and the South Hills (Figure 1). In case you missed it, the first job of the summer was focused on White-headed and Pileated Woodpecker surveys in the Boise National Forest (Nine Beautiful Sunrises - The Hunt For The White-headed Woodpecker).

Figure 1: Minidoka Ranger District - Sawtooth National Forest.
The thesis of my recently completed Master's Degree in Raptor Biology was focused on the Northern Goshawk within the South Hills. Thus I know the area and was well qualified to perform the more limited survey work required this year.

The focus of my activities within the Black Pines and Sublett mountains were to identify previously unknown goshawk territories and map out their nest locations. Chapter two of my three part master's thesis was on just this topic and has been published by the Open Journal of Ecology (Predicting nesting habitat of Northern Goshawks in mixed aspen-lodgepole pine forests in a high-elevation shrub-steppe dominated landscape). I was able to use a model I had created for the South Hills (described in the paper) and apply it to the Black Pine and Sublett Mountains. The model wasn't an exact fit as the forest composition is different between the sites. The Black Pine and Sublett Mountains have a large Douglas Fir component which is generally not present in the South Hills. When fitting models, the more general models apply to a broader landscape, but generally are less effective at making predictions. The models I had developed for the South Hills were fairly specific to the aspen, lodge-pole pine, sub-alpine fir, and sagebrush landscape found there. I was very interested to see if they would work elsewhere. 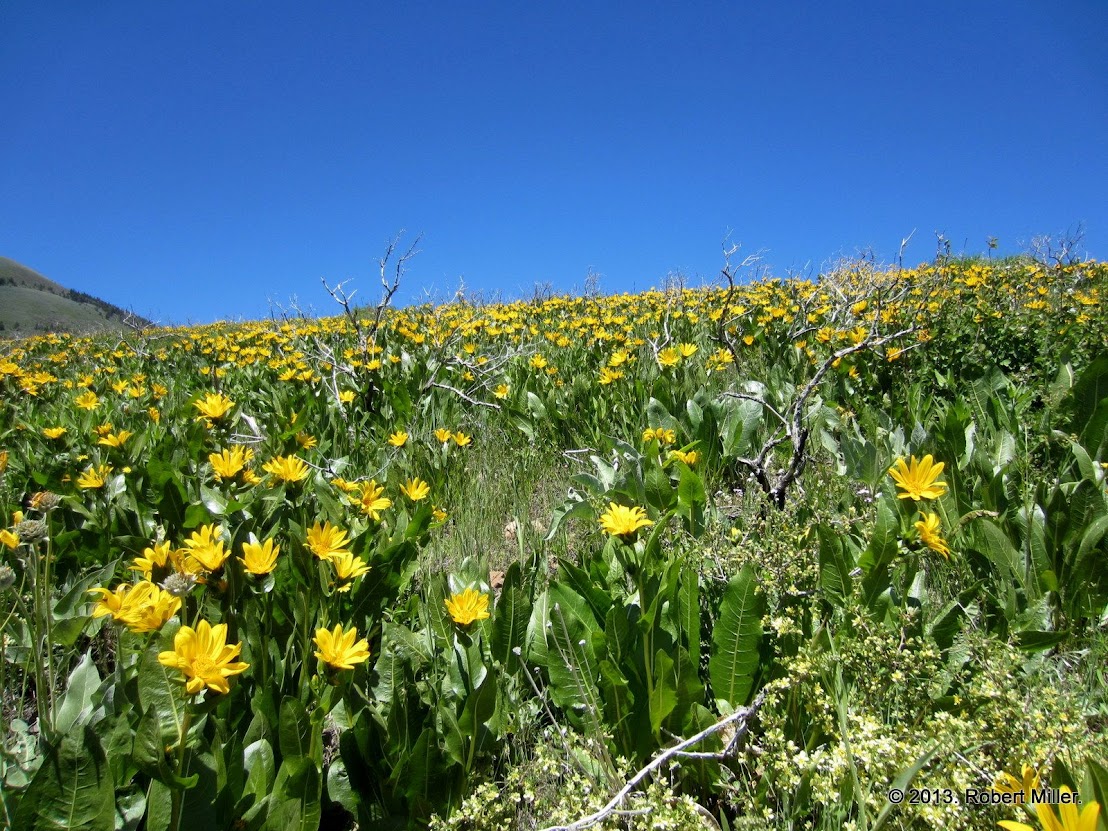 Wildflowers! - Black Pine Mountains, Idaho.
The Black Pine Mountains are very dry. Most of the drainages on the east side lack any running water. The drainages on the west have little more than a trickle. However, the higher elevation and cooler temperatures apparently help ensure that the forest can sustain itself. The terrain in the Black Pines is much steeper than the South Hills and the temperature was hot. Putting in four days there wiped me out, effects that would stay with me for the rest of the 12 days of work.

I am not sure how the mountains got their name, but after working for a day in a burned areas, I had a pretty good idea, although most of these are black douglas fir and black aspen... 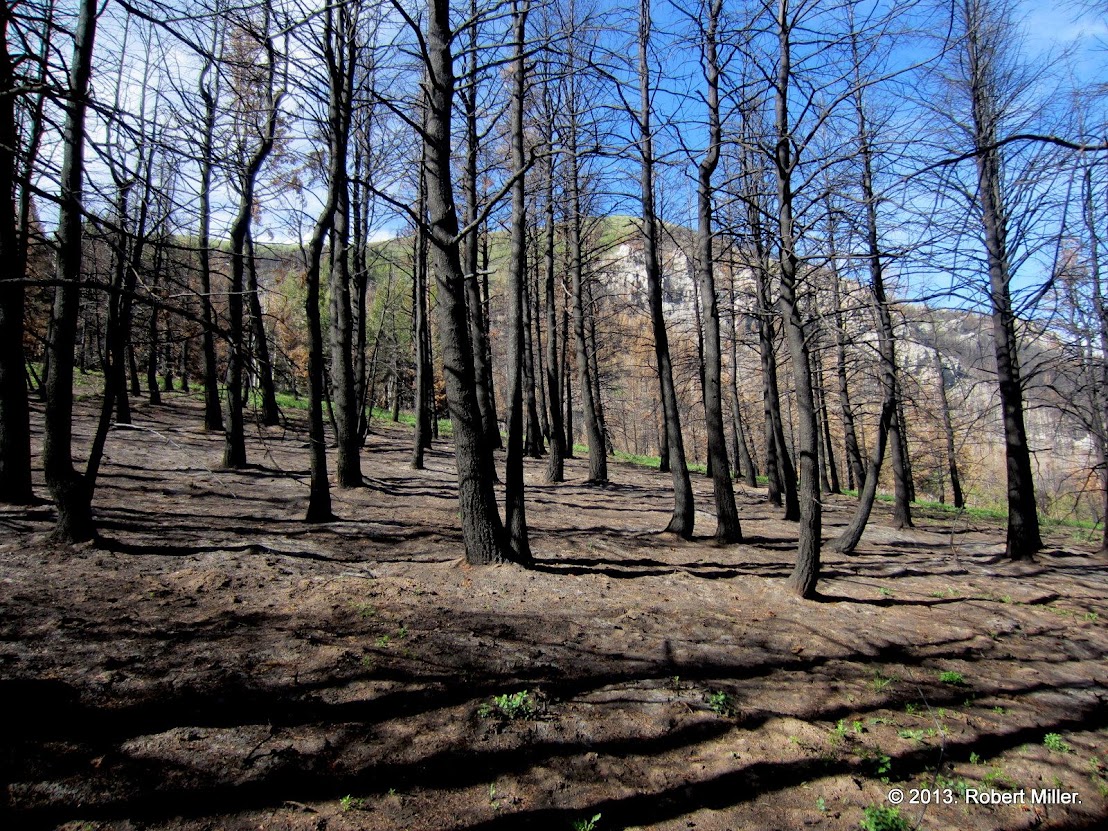 The Black Pines! - Black Pine Mountains, Idaho.
My prediction model performed just fine! I located occupied goshawk nests in the two highest ranking areas that the model had predicted. Maybe I earned my degree after all! Too bad I didn't go these points first! I started my surveys in areas that were identified about ten years ago. I trusted this provided information more than I did my own predictions, much to my disadvantage. Now I know better. In addition to picking up a number of first-of-the-year birds in the area, I also saw my first ever Plumbeous Vireo (Vireo plumbeus). 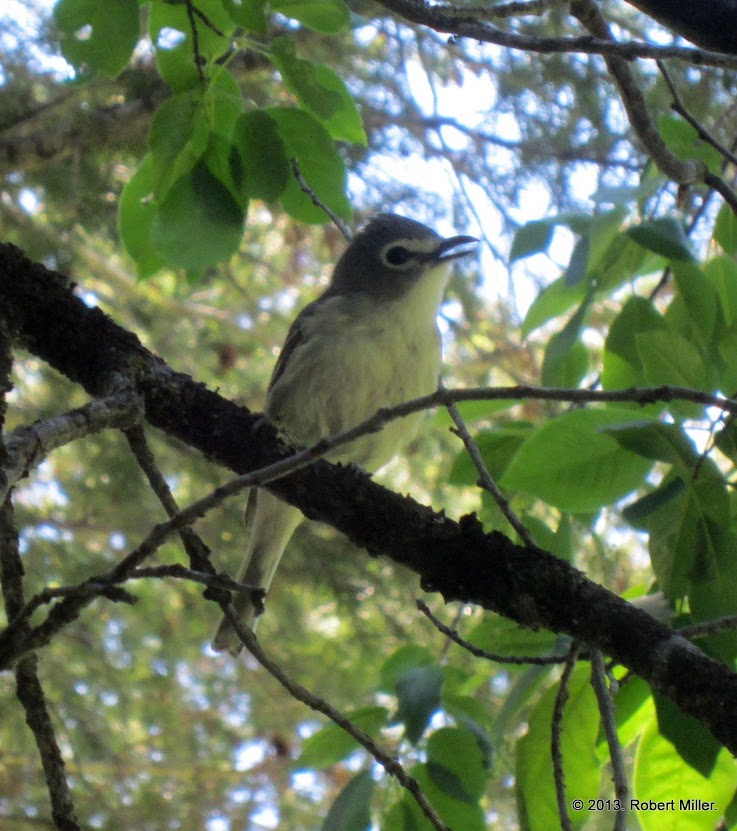 Life bird! - Plumbeous Vireo - Black Pine Mountains, Idaho.
Moving on to the Sublett Mountains, I faced new challenges. The terrain was a bit gentler, but my model had identified way too many areas to search. I was helped along in prioritizing search areas by focusing on two historical nesting locations, where I found occupied nests in both, and areas where observations had recently been reported. Beyond that, I chose areas prioritized most highly by my model. This was a very successful approach and I found a number of previously unknown nesting areas. 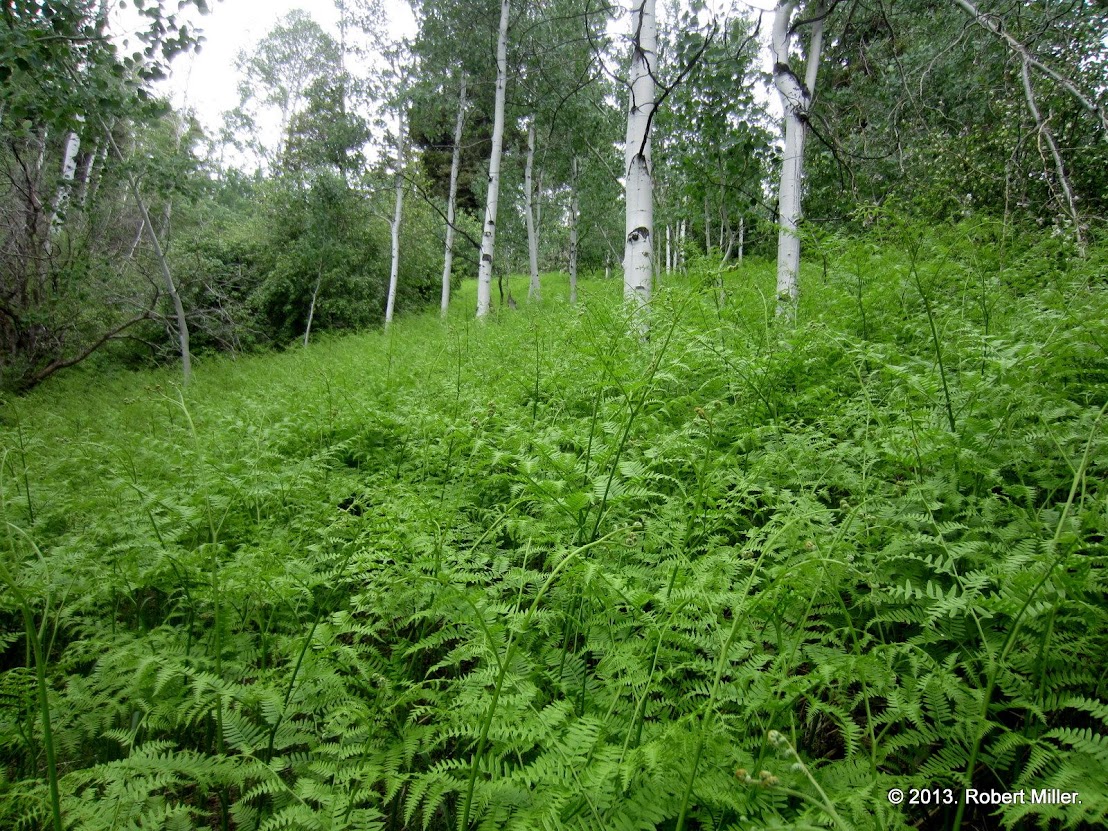 A sea of Pterophyta! - Sublett Mountains, Idaho.
I did find something that I found quite concerning. One goshawk nest had all of the signs of being occupied this year (lots of fresh greenery added and a goshawk spotted in the area), but was no longer so. It had apparently failed for unknown reasons. This is not unusual. As I searched the area for any indication of possible failure, I found a recently fired shotgun shell just 18 meters from the nest. I cannot say that this was the cause of the failure, but the evidence is somewhat compelling. A 4-wheeler trail passes just under the nest as you can see in Figure 2. Goshawks have the highest nest defense of any raptor in North America and would definitely attack a 4-wheeler which approached the nest. If an attacked rider did shoot the bird (or even just shoot to scare it away), it was a senseless crime. All they had to do was retreat. Of course, the nest could have failed for other reasons.

Figure 3: Recently fired shotgun shell near failed goshawk nest - Sublett Mountains, Idaho.
One of the central camping areas in the Sublett Mountains was packed with campers when I got there. On Sunday afternoon, they all left, leaving me alone! Within an hour a goshawk was hunting (successfully!) for Uinta Ground Squirrels in the sagebrush in front of my camp and two moose wandered out of the woods! It really is a great place. By Tuesday, more campers were coming back in for the weekend and the wildlife was not seen again. 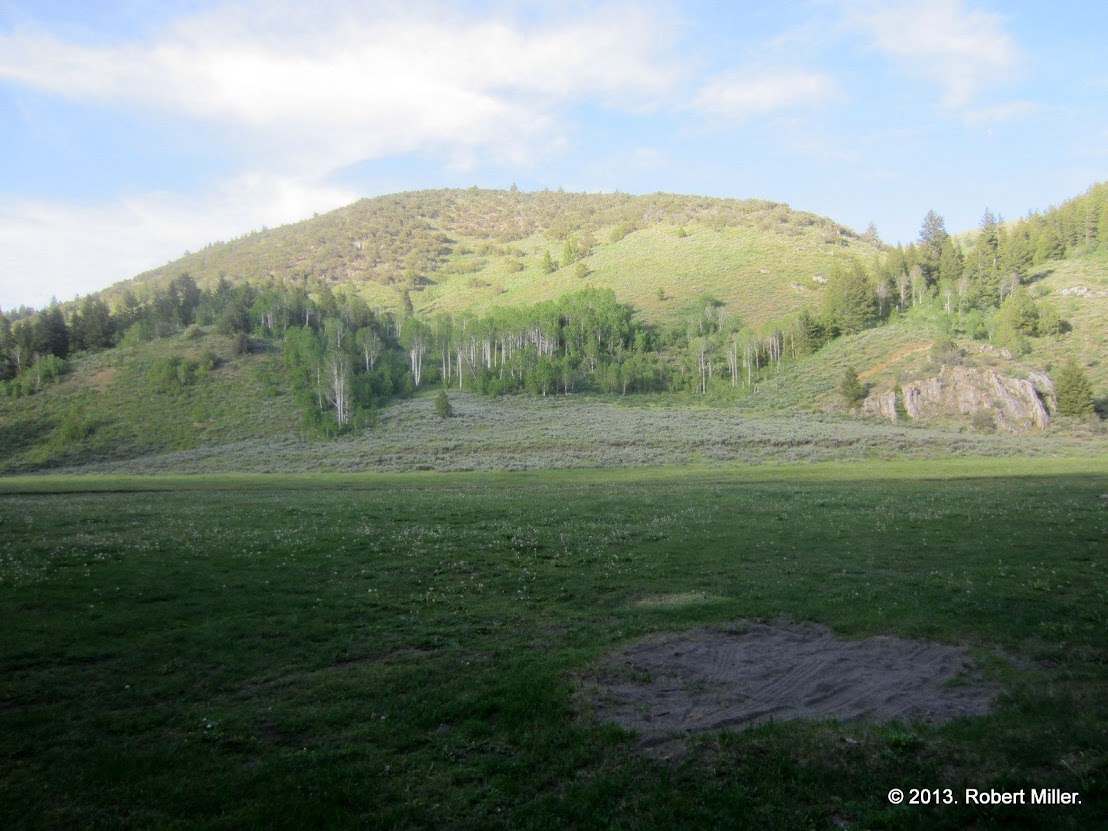 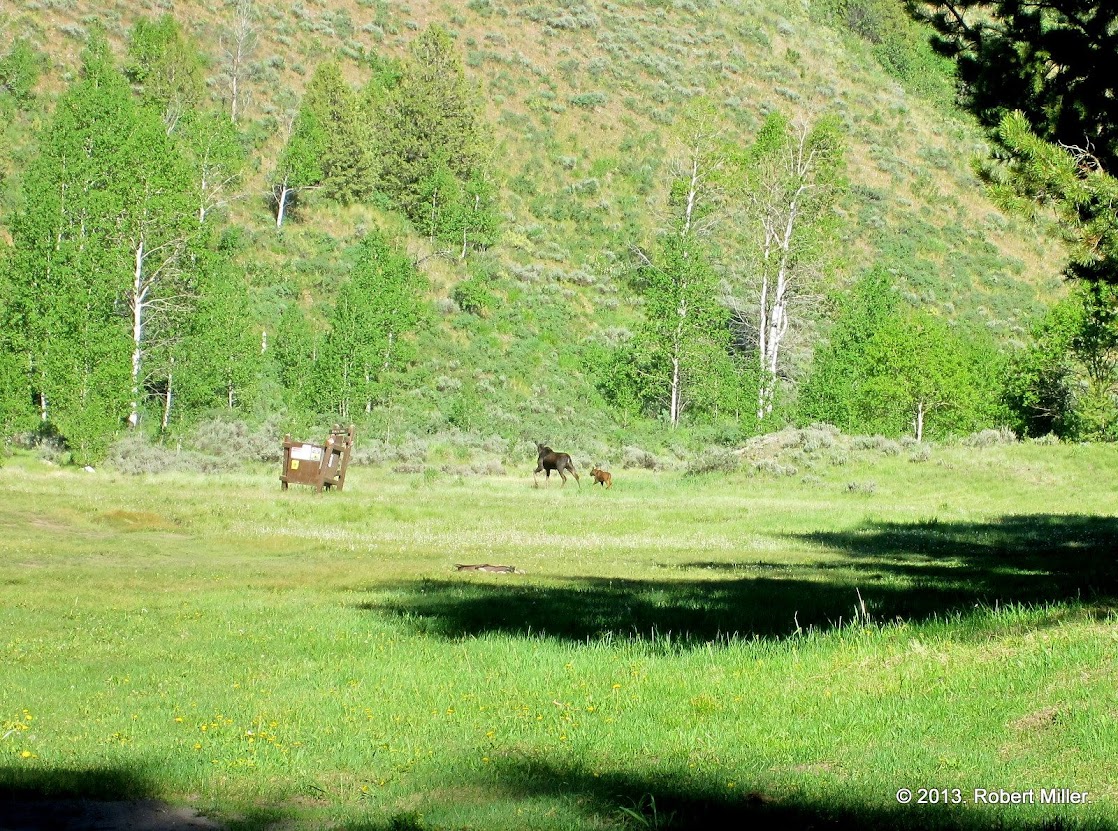 Mill Flat Campground, Sublett Mountains, Idaho.
The highlight of the Subletts, beyond providing further evidence that my goshawk modelling practices work, was the sighting of three Mountain Lions. These would be the first I have ever seen in the wild. I regularly see same-day tracks of Mountain Lions as I had just the day before, but not the cats themselves. I was traveling to search a new area when I saw something in the road in front of my motorcycle. I approached cautiously until one gave me a full broadside on the road. They were beautiful! I pulled up closer and tried to fish the camera from my pocket, but they would disappear up the bank before I could snap any pictures. The memory is still vivid in my mind. Awesome!

On my final night in the Sublett Mountains, my fresh food rations were getting a little low. I was forced to shift from fresh wholesome food over to backpacker rations. As I was preparing my freeze-dried meal, some campers from a few spots over brought me a steak dinner! They were up from American Falls for a week in the woods and had some leftovers. Apparently I looked like I needed a little help! After a week of work in the woods, I was definitely feeling a little thin. It was delicious and GREATLY appreciated!

With the completion of my work in the Sublett Mountains it was time for my return to my friends in the South Hills. I have spent the last two summers among the goshawks of the South Hills and was eagerly looking forward to checking back in on them. This was not officially part of my task, but instead something that I just had to do. Unfortunately, this would make for some very long days on the motorcycle checking as many nests as possible. I ended up checking 63 nest structures in 27 historical territories in two days. On one day I traveled over 100 miles on the motorcycle and unknown miles on foot to get the job done. This activity was different than the activities in the Black Pines and Subletts as in the South Hills I was only checking in on historical nesting structures and not searching for new nests. I found a number of nests occupied, but not as many as I had hoped. It may be that it's a great breeding season, but the birds are simply in nests we had not previously identified. For example, when I performed this activity at the start of last season we only found 7 nests occupied. By the end of the season we had identified 19 nests through our detailed survey method. I am working on a few counter hypotheses as well, but not much time to prove them out. I would have to spend a lot more time in the hills. For example, could last year's banner year (19 successful nests - 46 new offspring) have caused a decline in prey species such that food resources were scarce starting this breeding season? I wish I had the time and money to investigate this further. 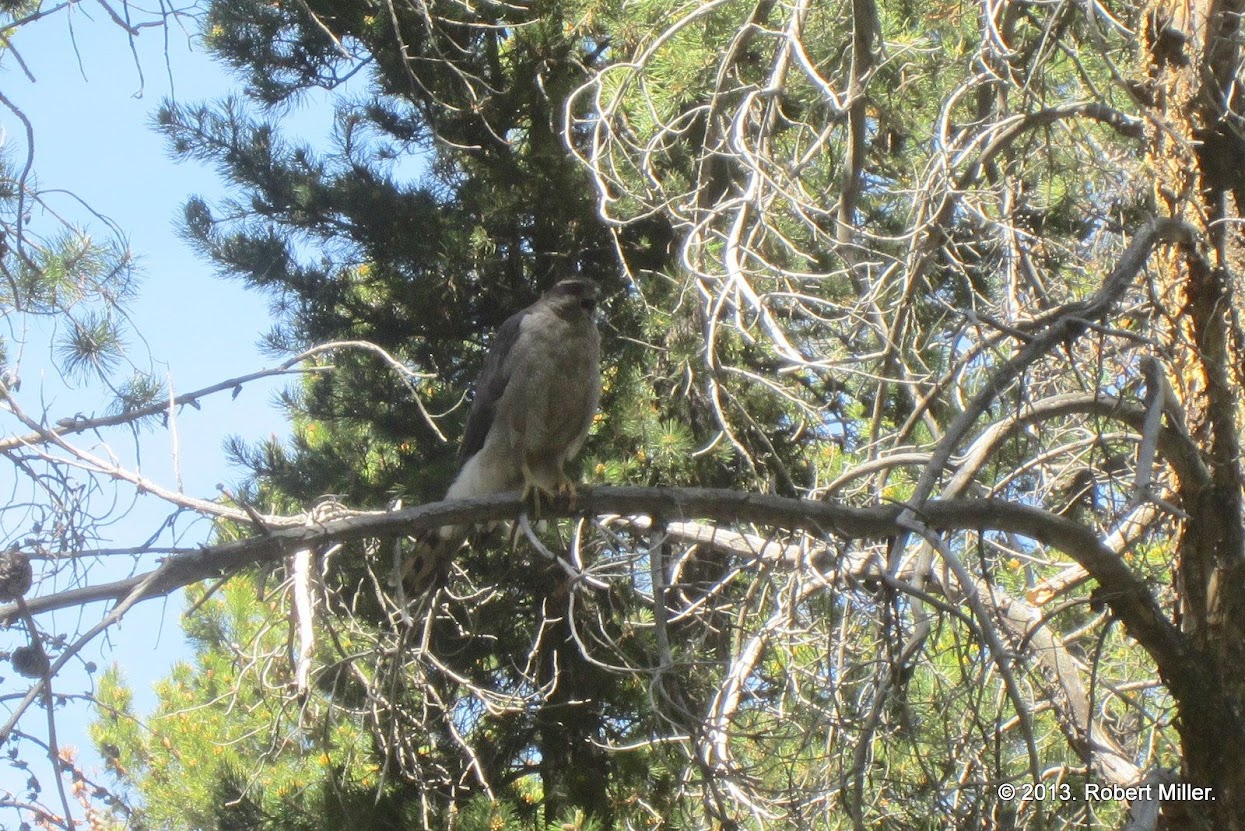 Old Friend, South Hills, Idaho.
Some of my old friends actually remembered me (the goshawks). The female pictured above was always calm and collected when I would enter her nest stand in 2011 and again in 2012. At least until the point that I installed a nest camera in her nest. That act apparently crossed a line of trust that she has never yet forgiven. Since that day she has aggressively defended the nest stand out to 200 meters. My visit this last weekend was no different. She immediately drove me to the ground, hitting the pack on my back multiple times. I retreated as fast as I could to leave her in peace. 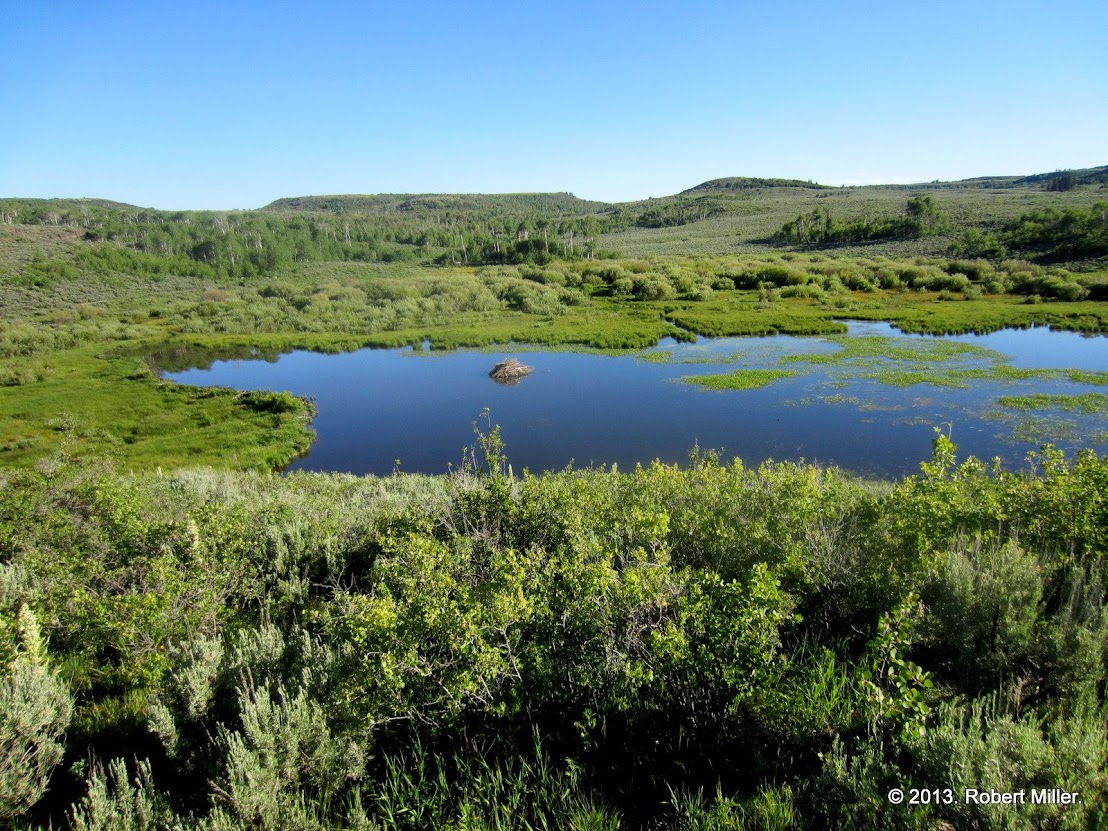 Not much rest for the wicked. A week of paperwork, logistics, and spending time with Karyn, then it back to the woods for 14 days of Black-backed Woodpecker surveys in the Boise National Forest. After that its a Black Swift study in northern Idaho, migration at the Straits of Gilbralter, and then back to the Boise ridge for fall raptor migration.
Posted by Rob at 7:58 PM 1 comment: