Not to be confused with the album from AC/DC which was burned into my skull in high school (the only tape in the men's locker room during my entire high school career!). I am instead referring to the Black-backed Woodpecker, a species I spent the last few weeks surveying for in the Boise National Forest. This was the third assignment of my whirlwind summer of fieldwork working with the Idaho Bird Observatory, three down, three to go. My first assignment was surveying for White-headed and Pileated Woodpeckers, the second was surveying for Northern Goshawks. Next up: Black Swifts in Northern Idaho, bird migration at the Straits of Gilbralter, and then fall raptor migration at Boise and Lucky Peaks. 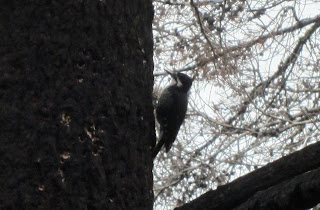 Black-backed Woodpecker, Boise National Forest.
The Black-backed Woodpecker is a rarely observed species due to it's northern range and specialized habitat (Dixon and Saab 2000). It occupies recently burned areas across Canada and dips into the United States in Idaho, Montana, Minnesota, Michigan, Maine and some portions of California. It presents challenges in determining the size of the population as it moves territories from year to year based on the condition of the forest regeneration after a fire. All habitats change from year to year, but recent burns undergo much more rapid succession as regeneration takes hold. Unlike the goshawks I study where a given territory may be occupied by birds for many decades, the ideal habitat for Black-backed Woodpeckers is fairly fleeting, lasting from a few years up to a decade. Of the ten woodpecker species that regularly occur in Idaho, the Black-backed was the last to be added to my personal life list, with only fleeting views until earlier this year. I have now had great views of many dozen of these unique, charismatic creatures. 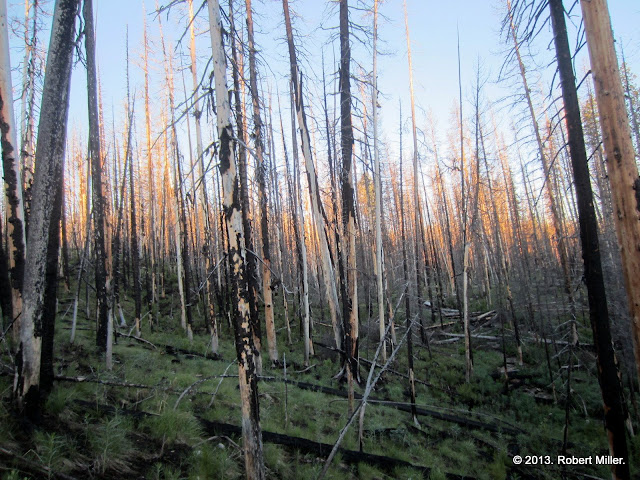 Black-backed Woodpecker Habitat, Boise National Forest.
We leveraged the survey protocol from the Institute for Bird Populations, adapting it to the needs of our forest. This involved randomly choosing ten medium to high severity fires occurring over the past decade. Each fire was visited twice enabling us to use some fancy statistics to calculate the probability of detection and probability of changes in availability to be detected. We surveyed 6-15 points a day for a given fire, starting ten minutes before sunrise. Some points were accessible by forest road and some by trail. One required a backpack trip in the night before. 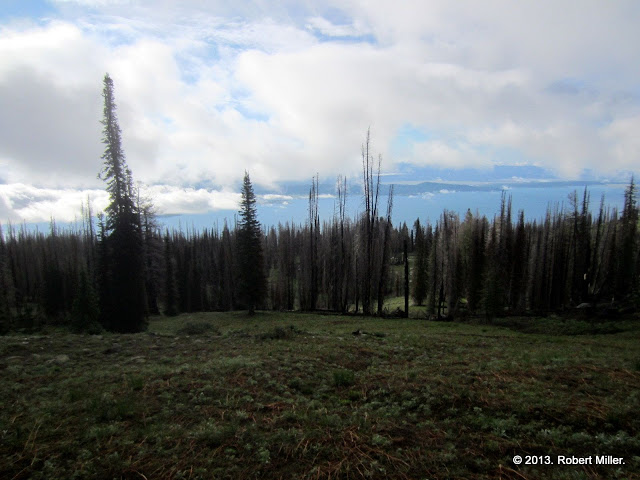 View of Cascade Lake from the Hurd fire, Boise National Forest.
At each point, we first assess the habitat by counting live trees, dead trees, basal area, understory vegetation, etc. This will be used later to develop a habitat suitability model for the species in our area. Models have been developed elsewhere, but these models are usually specific to the unique plant assemblages of a given forest. Next we play a 30 second broadcast of Black-backed Woodpecker drumming and calls, followed by a minute and a half listening period. We repeat the broadcast a total of three times or until we detect a bird by sight or sound. The birds often approach the broadcast, drumming and screeching as they approach making them very conspicuous. Of course, some just move in silently, so careful observation is required.

Two visits per fire and ten fires required 20 survey days of effort. I completed 14 days and Jessica completed six. My routes took me to West Mountain above Cascade Lake, to the headwaters of the South Fork of the Salmon River south of Warm Lake, to Burnt Log Creek NE of Landmark, to Wyoming Creek in Bear Valley, to Lost Lake in Bear Valley, to Eightmile Ridge upstream from Lowman, and to the Middle Fork of the Boise River. And then I got to go all of those places again for the second round. 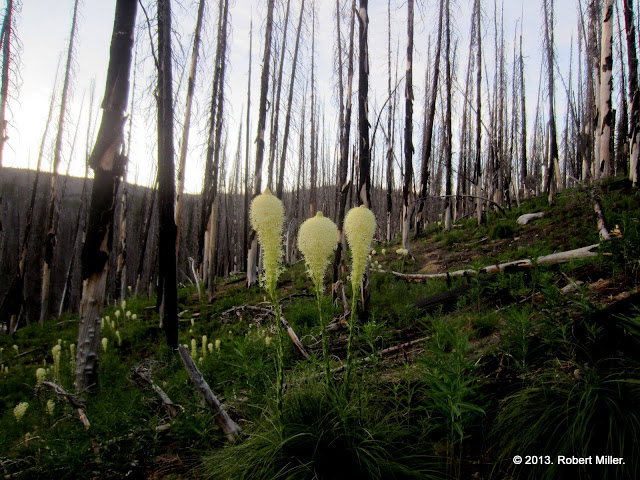 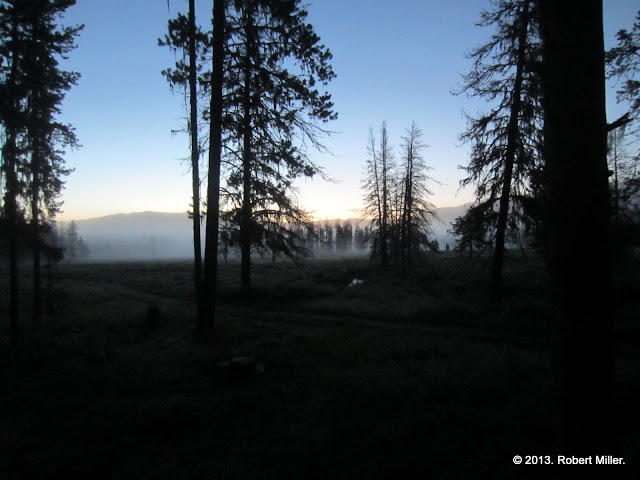 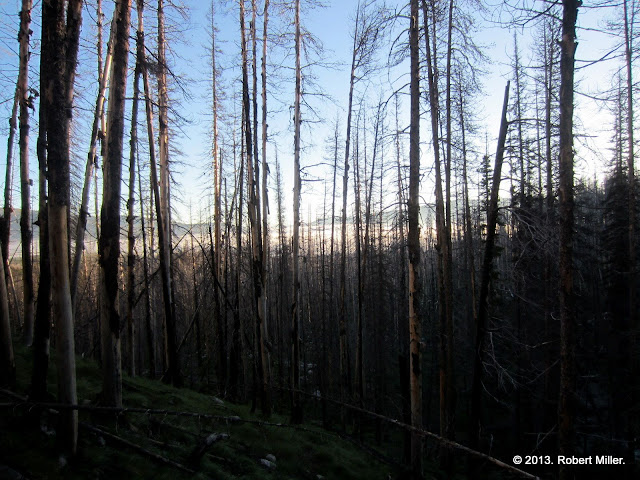 Fog still in valley at 4th point of the day, Wyoming Creek, Bear Valley, Boise National Forest.
The most difficult day was the backpack trip. I considered just hiking the route from the trailhead, but I would have had to start hiking at 3:15am and put in a 16 miles day with 5,800 feet of elevation. Ouch. I instead backpacked in to camp at the first point (4.5 miles and 3000 ft in elevation). The difficulty came with the 90 degree heat. With no water on the ridge I had to carry in water for two days (12 pounds), all my camping gear, and all my bird gear. It was a tough day. It was a lot easier a week later when I hiked it a second time and it was 15 degrees cooler! 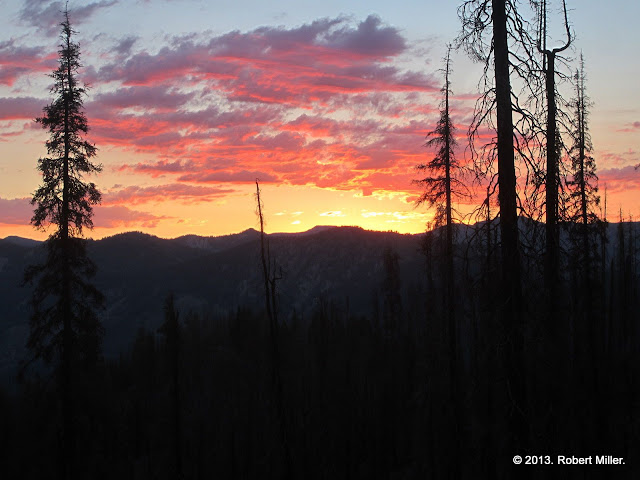 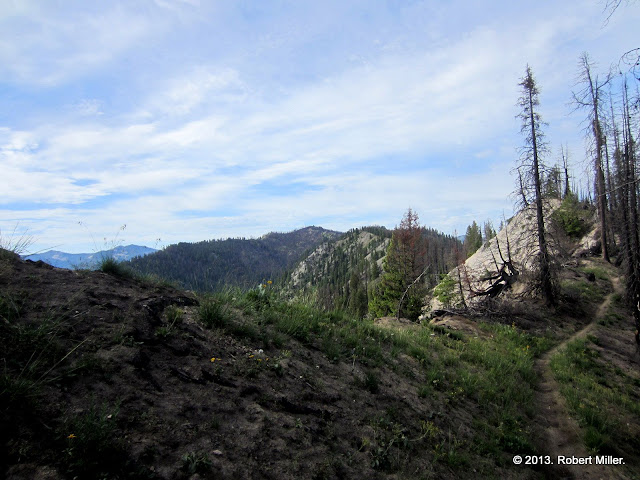 Trail along Castro fire on eightmile ridge near Lowman, Boise National Forest.
The work presented some opposite extremes. The first three days were wet. Its drizzled during my surveys and poured the rest of the day. I spent hours sitting in the cab of my field truck reading as the rain fell. 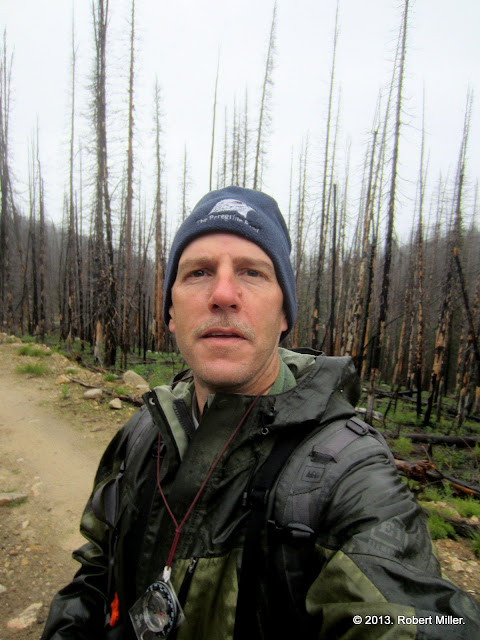 Self portrait, South Fork of Salmon River, Boise National Forest.
Then it shifted to the opposite extreme, 90+ degree days. I think I am just squinting in the sun, but Karyn says I look like the devil! 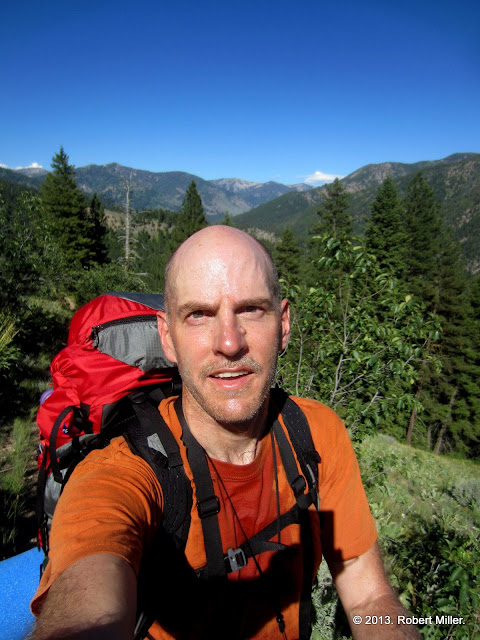 Self portrait during my backpack into Eightmile Peak.
The second week was much more moderate on all fronts. No rain and comfortable temperatures. However, for the first few days I experienced the worst outbreak of mosquitos in my life. As a field biologist and someone who spends a fair amount of time in the mountains, I am quite familiar with mosquitos. However, this was remarkable. I was inhaling swarms as I hiked. I upgraded from the natural repellent to full on industrial strength Deet, to no avail. I was hiking as fast as I could crash through the brush, which only intensified the number I swallowed. I counted 20 bites on one arm! They even flew up my pant leg and bit my leg! Not my best day in the field... But, as I have said before, it still beats the office.

The analysis on this project won't be complete for a few weeks, but we did find lots of birds. It is either a great year for Black-backed Woodpeckers or they are doing well in general. Only time will tell.

Next up: Karyn and I will spend a week in the woods on vacation, then its off to northern Idaho to survey for Black Swifts at waterfalls. I will post a summary and photos of that in due time. 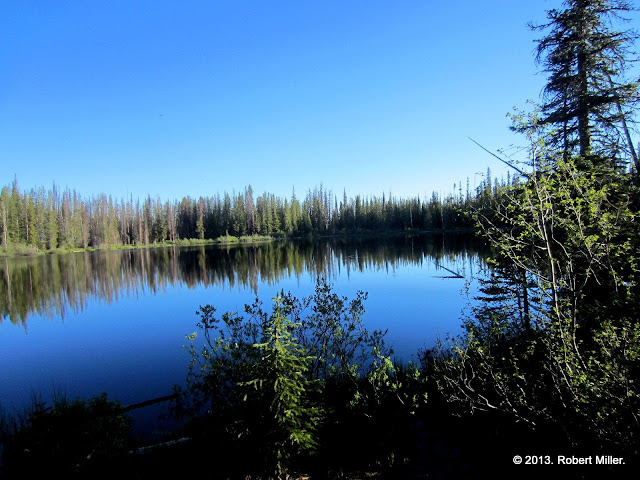