A Swoop of Swifts - 14 Waterfalls in Eight Days

For the past nine days, Karyn and I have been working for the Idaho Bird Observatory searching for the rare and secretive Black Swift (Cypseloides niger; sometimes referred to as the American Black Swift). The nesting locations of these birds couldn't be more beautiful as they mainly nest behind or at least near waterfalls. That shouldn't imply that the work was necessarily easy.

The Black Swift is the largest swift that breeds in Northern America. It is a fast flier which forages on flying insects and has a very unique biology. The birds only lay a single egg and have a very long brooding period. It is believed that when juvenile swifts leave the nest, they immediately migrate south. The first flight from the nest could be hundreds of miles. I am not aware of any other species with this behavior. 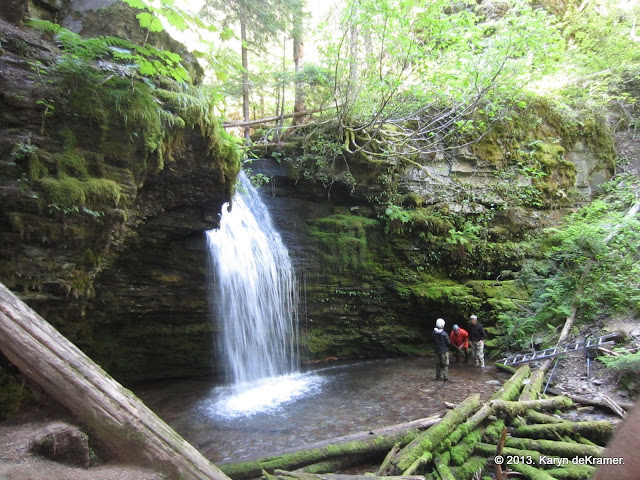 Shadow Falls with Colorado Research Team.
Our trip began at Shadow Falls, a known Black Swift breeding site, to help a Colorado Research team attach some geolocators to some swifts and to be trained on the survey protocol we would use for the remainder of our work. The geolocators are very small and sense day length. Using the daylength data and date, computer algorithms can calculate the location of the bird within a few hundred miles. It's not as accurate as GPS, but it is very small and can be used on these small birds. It is very useful in this case as little is known about the wintering locations of these birds. The Colorado research team was the first to document Black Swifts travelling from Colorado all of the way to western Brazil in winter (Beason et al. 2012). They are now applying geolocators to swifts breeding in other areas to further determine migration patterns and potential sub-populations. Two birds from Shadow Falls are now sporting geolocators. The team will return next year to recover the locators and start processing the data. It should go without saying that special training and permits are required to capture and handle these birds (any bird for that matter). 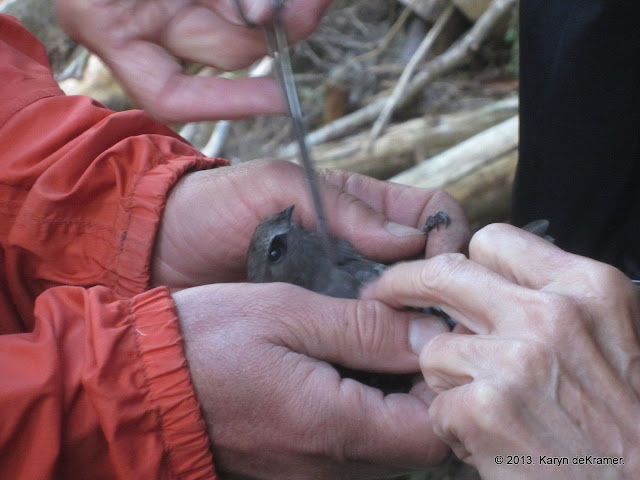 Final harness attachment.
Previous to our work, there were only four documented breeding locations in Idaho. Karyn and my effort was focused on finding additional breeding areas in the state. Our limited work was funded by the US Forest Service (Northern Region). I am happy to say that we were quite successful.

My supervisor and research director for the Idaho Bird Observatory, Jay Carlisle, joined us for the training at Shadow Falls and the first survey of a new falls area - Johnson Falls. Jay bravely crossed the stream in his scivvies to confirm the presence of nests and get the photo included below. I withheld posting the photos of this event for future blackmail potential! 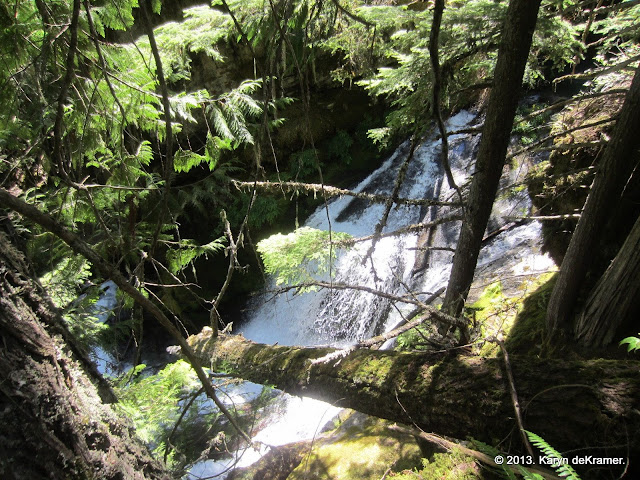 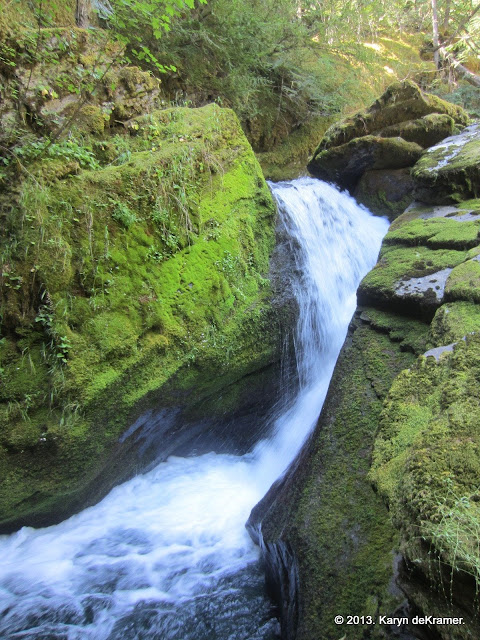 Johnson Falls Black Swift nests (Photo: Jay Carlisle).
Since we discovered a new breeding area, the mission was already a success after only 2 days. Karyn and I then headed off on our own. Our survey protocol included a two hour daytime survey assessing the potential of the falls and searching for nests. The potential to host swift nests is based on multiple criteria including the waterflow and spray, the number of niches and inaccessibility of the niches by predators, shading of the waterfall, moss abundance, landscape relief, and direct flight access by the birds (Levad et al. 2008). For well suited falls where we could not find any nests, an evening survey protocol was implemented. On this protocol we observed the falls for the final two hours of daylight and recorded the maximum number of Black Swifts observed during each 15-minute interval. Black Swifts return to their nest just before dark so this can also inform us of potential nest locations. It requires a great deal of attention as these birds fly very fast and enter the nest area in a flash. 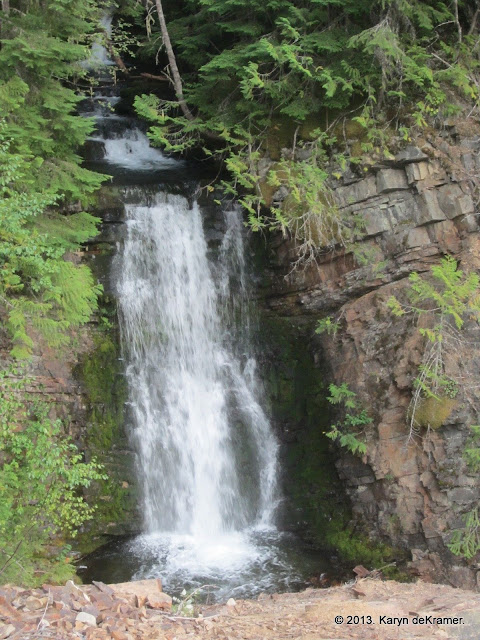 Skin Creek Falls - day and evening survey location.
Determining where Black Swifts nest can be a challenge. While they often nest behind the waterfall as they do at Shadow Falls, they also nest in nearby niches. At Copper Falls, the niche isn't even visible when facing the falls. But it is there and now another confirmed breeding site! 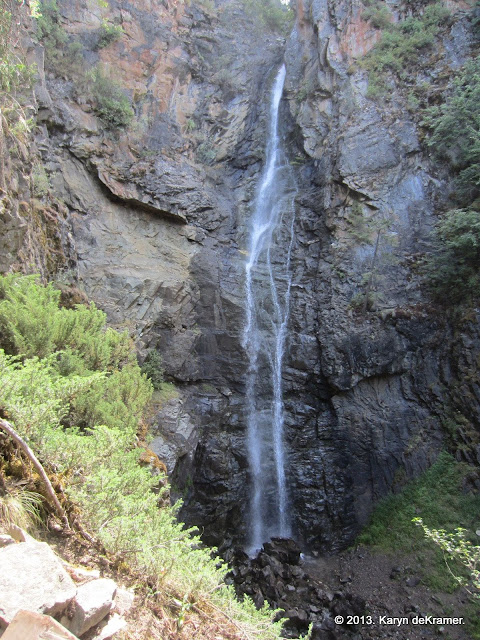 Copper Falls from side after scrambling up to view niches. 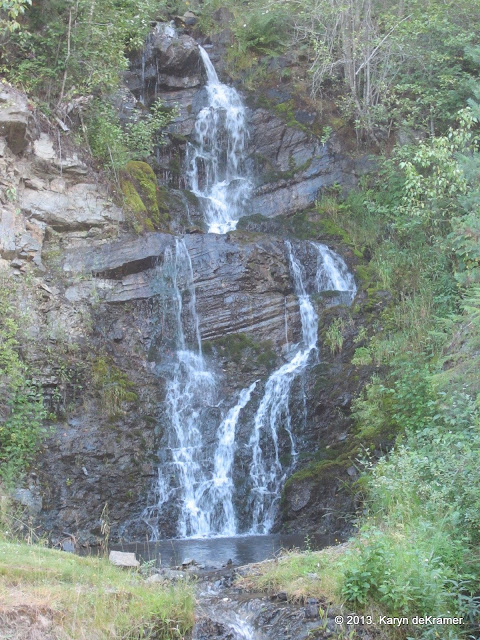 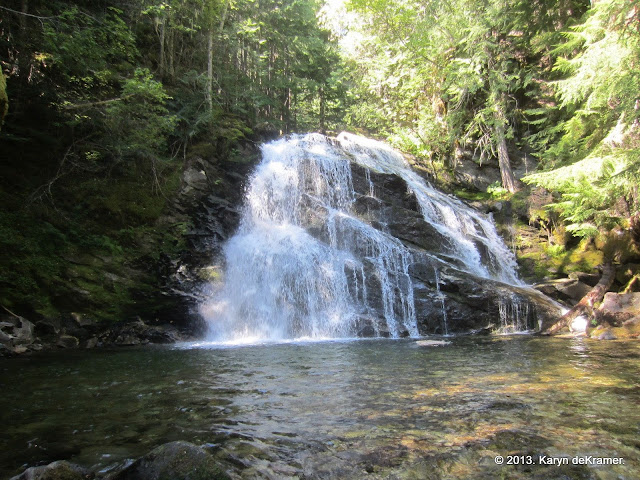 Snow Creek Falls.
Myrtle Creek Falls was another high priority falls as there had been previous reports of swifts in the area. Unfortunately, much of the falls area was not safely accessible. We were forced to observe from a distance. The best habitat was high in the falls area, dark and mossy. During our evening survey we observed a couple of swifts on a few occasions. At 8:25 two birds came in low and fast, shooting into the upper falls area. They did not come back out. This is highly indicative that they have nests in that part of the falls. 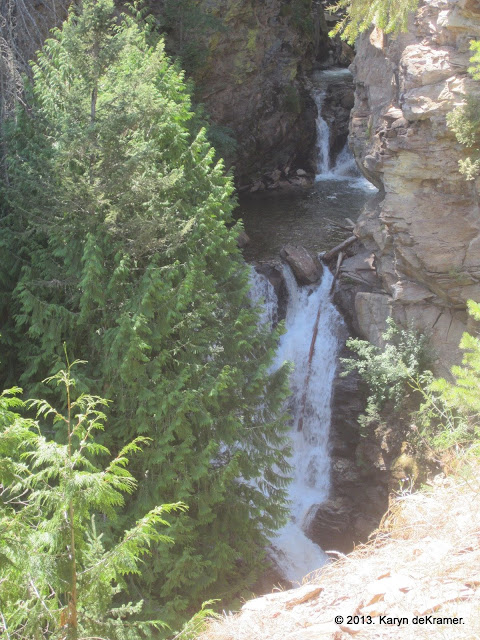 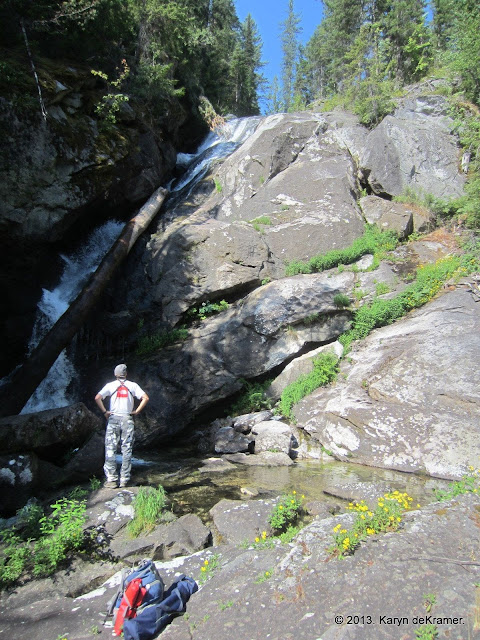 Jeru Falls - a tough journey.
Our favorite waterfall was Caribou Falls northeast of Priest Lake. The hike was moderate and the falls area was wet, cool, and mossy. 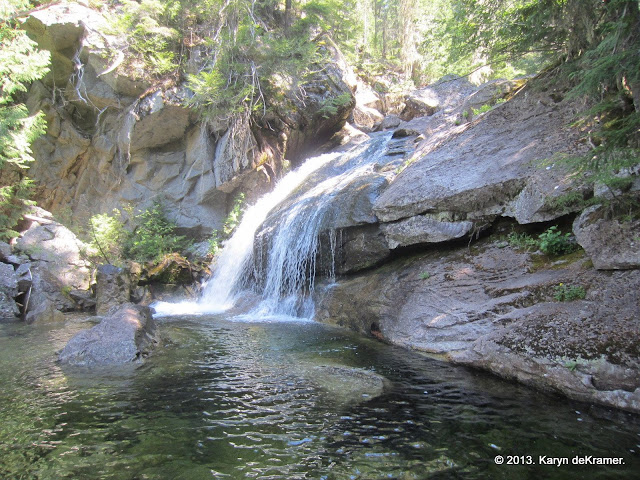 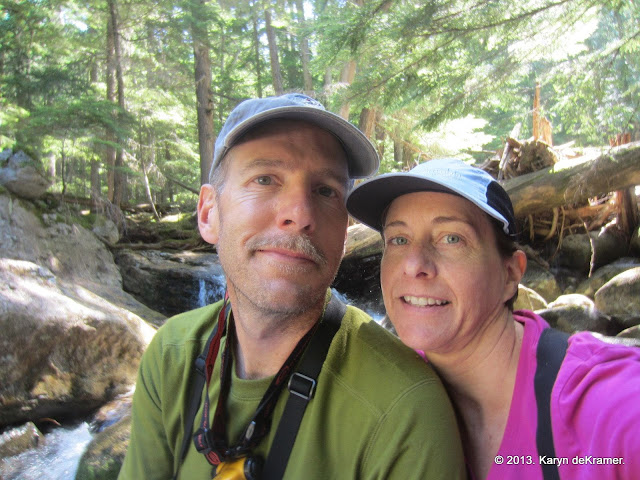 Karyn and my self-portrait at Caribou Falls. 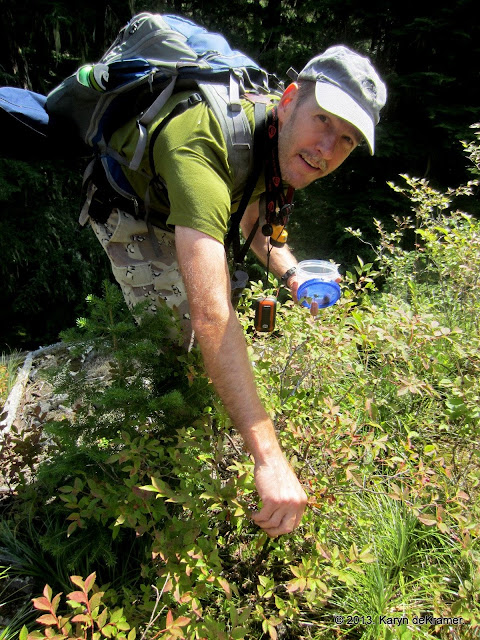 North Idaho Huckleberries - Awesome!
We weren't the only ones eating the berries. There were at least five piles of bear scat at the falls. We were careful to make lots of noise and have our bear spray handy. This is grizzly bear country! This pile was so impressive, it even stained the wood purple! 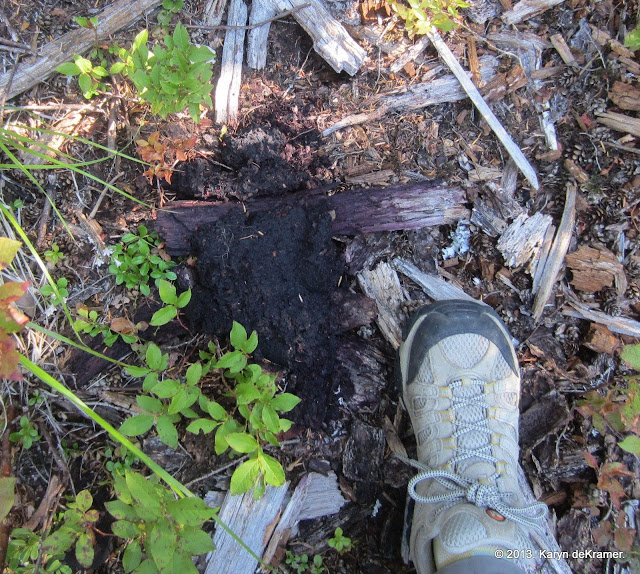 Bear Scat with tons of Huckleberries!!!
Our travels also took us into Washington to the Roosevelt Grove of Ancient Cedars. Granite Falls is located near the grove. While outside of the state of Idaho, it can only be reached by road from Idaho and falls under the management of the Idaho Panhandle National Forest. The falls are just a mile over the border. After a daytime survey we decided to stay for the evening. During the evening survey we observed many swifts over head, up to five at a time. Things got crazy when they were joined by about 15 swallows, but they eventually segregated back out. Once again, just before sunset, they appeared to head to roost. Six birds, one at a time, flew about 50-feet over the lower falls up the valley not to be seen again. We searched again the next morning, but we failed to find an occupied nest. However, it is reasonably safe to assume that they breed nearby. 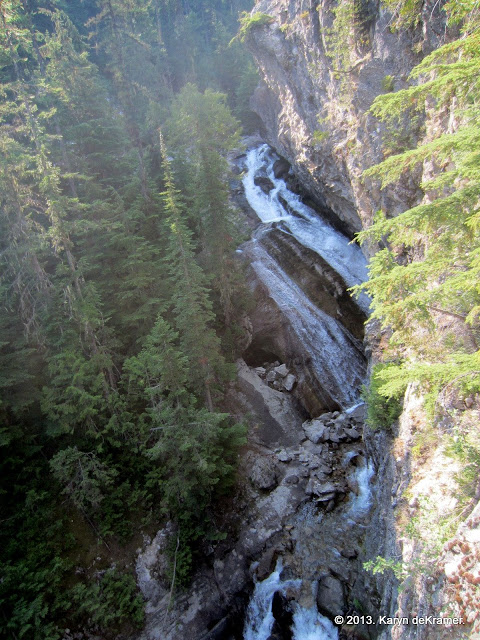 Lower Granite Falls (Washington).
A late addition to our agenda was a hike into Steven's Lake to check out the falls there. We found it well suited, but didn't find any swifts. 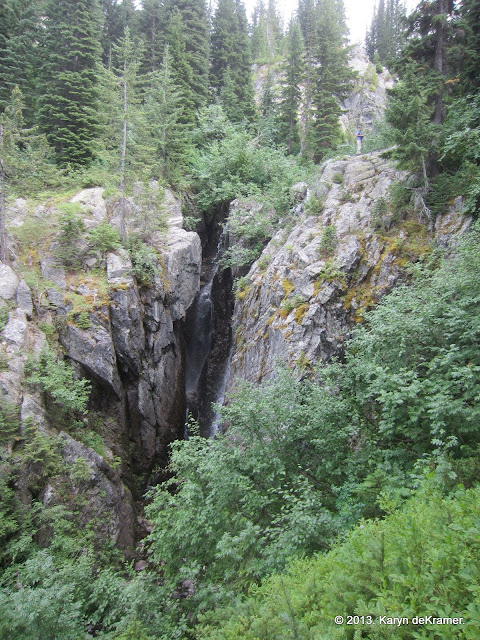 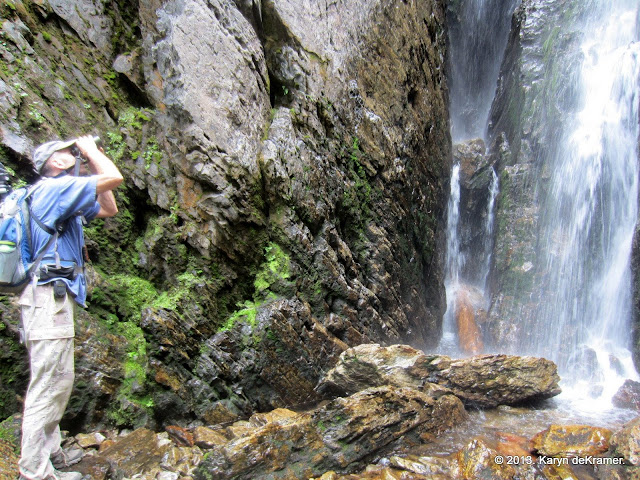 Upper Stevens Lake Falls
While performing swift surveys, we always kept an eye out for American Dippers. Dipper nests can be good indicators of suitable habitat as they depend upon moss, and prefer darker areas over rough water. They don't always nest at waterfalls however. Here is a video of a dipper at Lower Stevens Lake.


American Dipper, Lower Stevens Lake, Idaho.
In the end we increased the number of confirmed breeding areas in Idaho from four to six, added a seventh likely breeding area in Idaho and one in Washington. This will inform and guide future surveys as well as provide more support for the fact that Black Swifts do breed here regularly and should not be considered an anomaly.

This Black Swift project was a great piece of my summer fieldwork. It was great to have Karyn along as well. I should note that her productivity was infinitely better than mine. She was an unpaid volunteer on the project and was responsible for the discovery of the Copper Falls nest and many other project contributions. Her return per dollar paid was quite high.

In between fieldwork I have quite a bit of analysis and paperwork to complete. I have a final revision to make of a goshawk manuscript which has been accepted by the Journal of Raptor Research, I have a manuscript on climate change and bird migration in review for a special edition of Studies of Avian Biology, I am working on a draft manuscript on sagebrush oriented songbirds, I am a co-author on a goshawk parasite paper, I am analyzing Black-backed Woodpecker survey data, I am working on a database for the long-term Kestrel research project at Boise State, I am providing GIS consultation on a Turkey Vulture research project, I have analysis work for a waterbird project in eastern Idaho to complete, I expect to launch a joint avian migration research project with the team in Spain, and need to complete annual reports for goshawks and Black Swifts. Oh yeah, I also need to find a job for the winter. Whew, I better get busy...
Posted by Rob at 3:29 PM

As president of the Pilchuck Audubon chapter in Everett, WA. one of our major projects was saving, and then attaining IBA status for Vaux's Swift roosting sites. In the process having my consciousness raised about swifts in general, and being from north Idaho I went to Shadow falls three years ago and found three active nests. This past June I found four. Excited about the prospect of finding more sites I went to the Northwest Waterfall Survey and identified eight waterfalls that appeared to have precambrian geology and a water curtain that would be inviting to Black swifts. Now that I've returned to spend my retirement years in north Idaho I had planned to check out some of these potential sites. Well as it turns out being a 72 year old fart with some health issues I'm a bit challenged on following through and disappointed. So I was pleased when Shirley Struts sent me your website and read about your success accompanied with terrific pictures. Kudos to you and Karyn.Good stuff.

As president of the Pilchuck Audubon chapter in Everett, WA. one of our major projects was saving, and then attaining IBA status for Vaux's Swift roosting sites. In the process having my consciousness raised about swifts in general, and being from north Idaho I went to Shadow falls three years ago and found three active nests. This past June I found four. Excited about the prospect of finding more sites I went to the Northwest Waterfall Survey and identified eight waterfalls that appeared to have precambrian geology and a water curtain that would be inviting to Black swifts. Now that I've returned to spend my retirement years in north Idaho I had planned to check out some of these potential sites. Well as it turns out being a 72 year old fart with some health issues I'm a bit challenged on following through and disappointed. So I was pleased when Shirley Struts sent me your website and read about your success accompanied with terrific pictures. Kudos to you and Karyn.Good stuff.