Studying the Smaller Avifauna of Tarifa

I recently completed a two week trip to Tarifa, Spain as a guest researcher from the Idaho Bird Observatory to study bird migration with Fundación Migres. You may read my previous reports on this trip -  Migration on an Unimaginable Scale and Into the Cage.

Most of my time in Spain was spent counting migratory raptors and storks at the Strait of Gibraltar. However, when the weather interfered with raptor migration, or we had a unique opportunity, or in the evening after counting during the day, we did pursue some of the smaller species in the region. This included pursuing a songbird known among other names as a Rufous-tailed Scrub Robin and on another occasion, banding Barn Swallows.

The Rufous-tailed Scrub Robin is known by many English names including Rufous Scrub Robin, Rufous Bush Chat, Rufous Bush Robin and Rufous Warbler. They breed in Europe and migrate across the Strait of Gibraltar to Africa. The Migres team had a geolocator to attach to a breeding bird in Spain. Geolocators are very small electronic units which capture the length of each day for an entire year. The same bird must be recaptured a year later to extract the data. The birds are too small to carry a transmitter. Since these birds regularly return to the same breeding area year after year, recapturing them to extract the unit is a distinct possibility. We had reports that a bird was present on its breeding grounds just north of Tarifa two days in a row. Our job, after a day of banding Black Kites (Into the Cage) was to go north of Tarifa and trap a very specific bird. 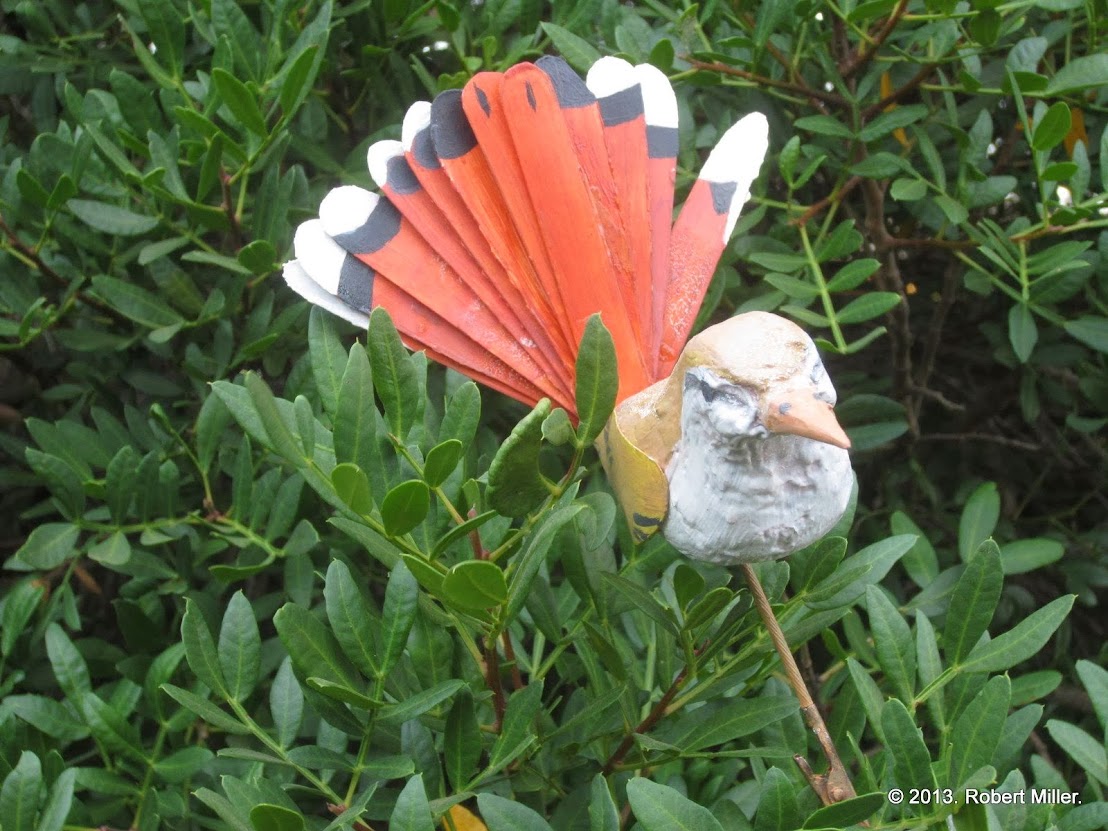 We arrived at the reported location that evening. We set up a portable mist-net to capture the bird. We played a recording to attract the bird and deployed a decoy to bring it in close. Since we were on the breeding ground of this bird, and they are territorial, we would expect that any presence of a potential competitor would be met with a challenge from the resident bird. Then we waited. And waited.. And waited… The bird was not there. We likely missed it by one day! It was on its way to Africa, or more likely, it was already there. It would have been a life bird for me, but I did see a number of others while I was there including Little Owl, Eurasian Swift, and Common Swift.

The purpose of the Barn Swallow research is to explore the variability of feather molt of these birds during migration. It was once thought that they waited to molt feathers until they arrived on their winter grounds in Africa. Well, that does not appear to be true. Once again we set up a mist-net to capture the birds. We played a call, but this time it was a roosting call instead of a territorial call. The roosting call attracts flock oriented birds in to roost where they are trapped in the mist net. Since these birds are migrants, territorial calls would have no effect other than to possibly discourage birds from approaching the net. While we were still adjusting the equipment, we trapped a Eurasian Reed-Warbler and a Great Reed-Warbler in the net. 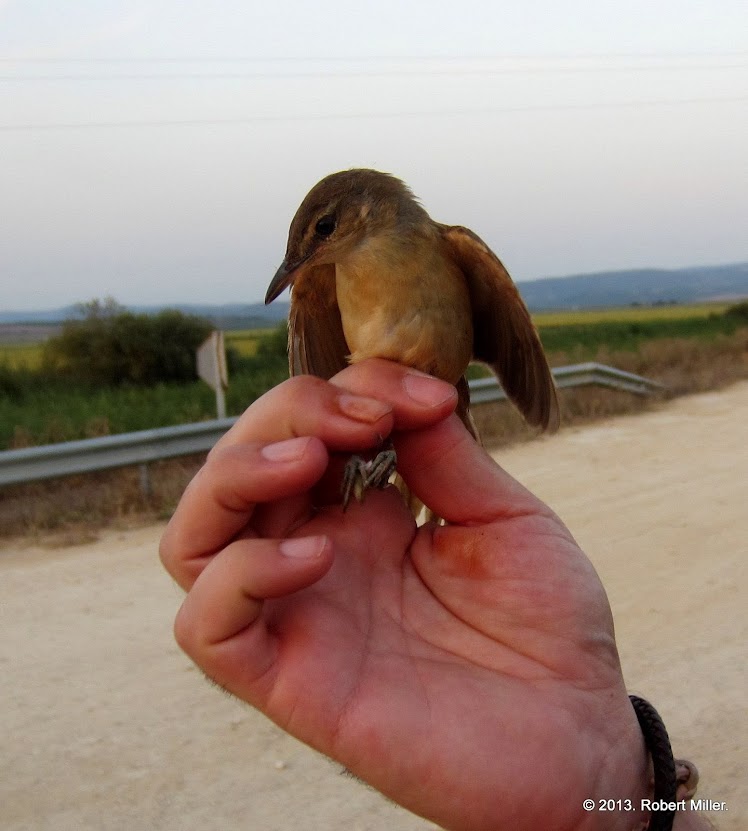 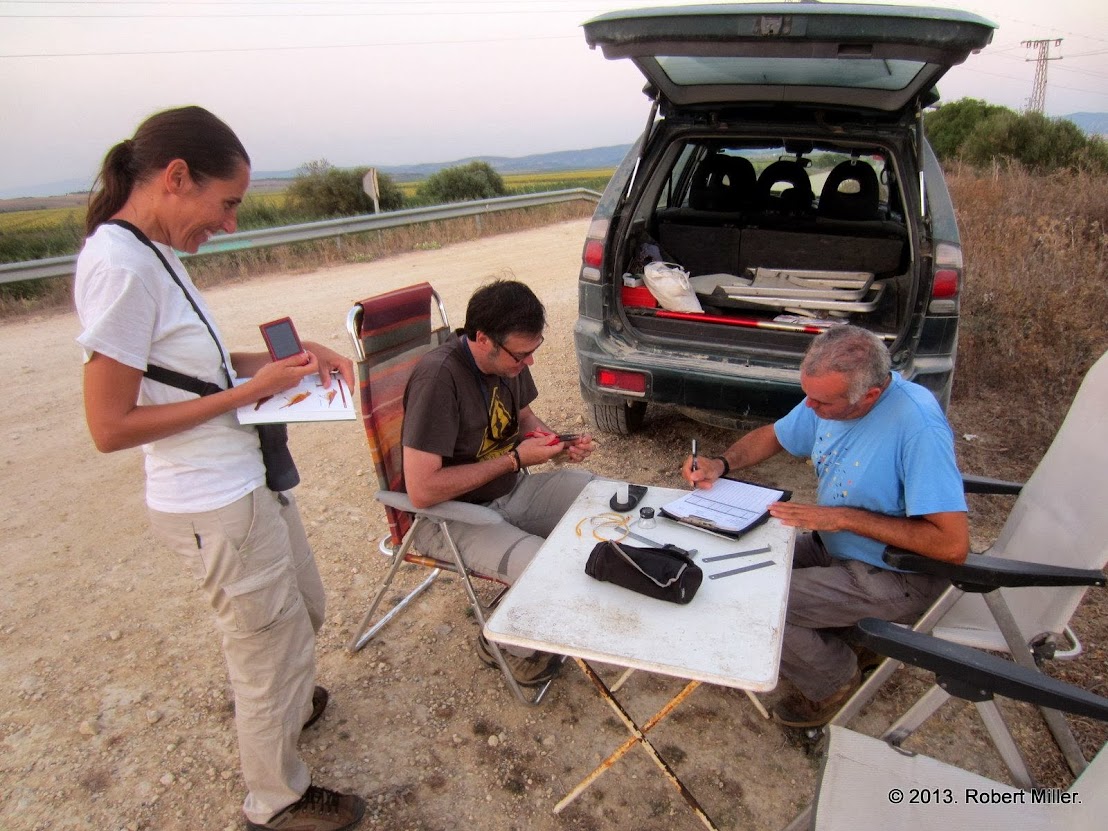 Soon the sun would set and we would wait in the dark, and the bugs, lots of bugs, to go clear the net. When it was time we walked down to find 44 swallows in the net. Crash course in removing birds in the dark without a headlamp! In general, the swallows do not get as tangled as most songbirds and were quite easy to extract. We carried them back to begin the banding process. We set up an assembly line to process the birds. My job was to band, or ring, the birds. Susana kept me busy with a steady delivery of birds. Pablo measured the birds and Alejandro checked the molt patterns. Nieves recorded the data.

As I processed birds, I was swarmed by insects. In my eyes, ears, nose, you name it! It was brutal, but I had to stay focused on the birds. All went well until the last bird. I was expecting a 45th swallow, but it was a Eurasian Reed-Warbler. The swallows were calm and mellow in the hand and I got used their calm demeanor. As I pulled the Reed-Warbler out of the bag, it immediately escaped. I fumbled the last bird of the night! Regardless, it was a very successful evening.

We stopped for pizza on the way back, arriving at my hotel after 2 am. Not much sleep for the wicked.

Since my return in early September, I have been working hard banding migrating raptors in the states, completing two research manuscripts, and kicking off a joint manuscript project with my new friends from Spain. I will be providing updates on all of these projects in the coming weeks.