The Faces of Fall

The beginning of November brings an end to another year of monitoring autumn bird migration in southwest Idaho. After my brief trip to Spain to study bird migration there (see previous blog posts), I returned to Idaho to take my spot in a plywood box on the mountain, attempting to lure in raptors for banding, measuring, and release. The Idaho Bird Observatory operates two banding stations, one at Lucky Peak and one at Boise Peak, and I split my time between the two.

I trapped raptors three days a week from early September through the middle of October. On my watch, we banded 165 migrants in 18 days (not all trapped and banded by me as I often had an assistant with me – Thank you Jordan, Michelle, Teague and David). For me the season started off with the usual suspects (American Kestrel, Sharp-shinned Hawk, Cooper’s Hawk, and an occasional juvenile Red-tailed Hawk), but I finished with some spectacular diversity. I have included photos of some of the highlights.

The Idaho Bird Observatory has been banding birds on the Boise Ridge for 20 years. The data we gather has been used to advance our scientific understanding of these species and to inform management and conservation plans by various government agencies. The data has been used in a number of scientific publications, two of which I have authored.

This work is performed by trained biologists with special permits from the US government, the state of Idaho, permission from the local Idaho Department of Fish and Game, and authorization from the Boise State University Animal Care and Use Committee which helps to ensure that our impact on the animals is justified from a scientific perspective. 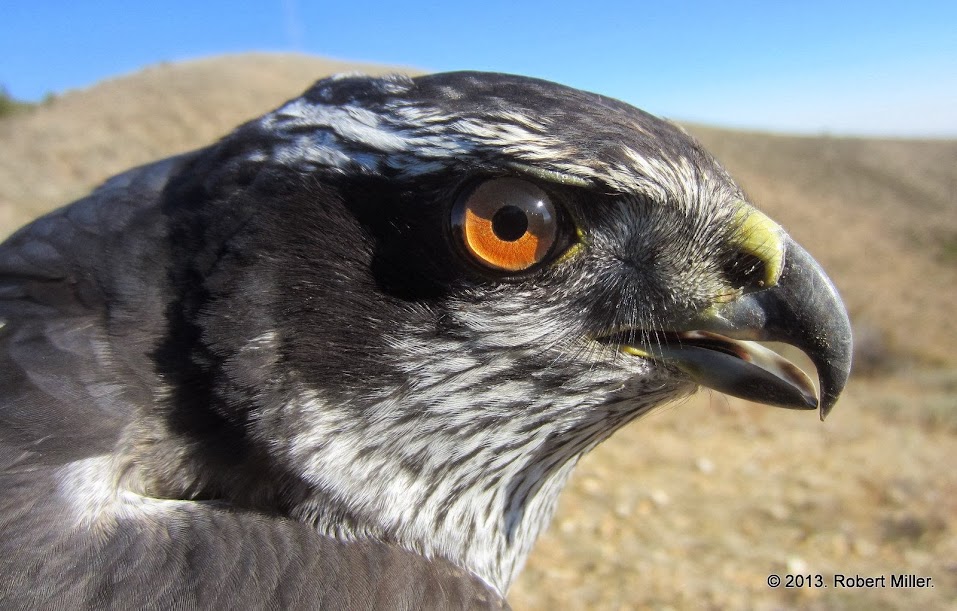 To age raptors, we as banders use some unique and sometimes confusing terminology. A “Hatch-year” bird is in its first year. The bird was hatched in the spring. During autumn migration, the bird would be 5 or 6 months old. A “Second-year” bird is in its second year, or what we might usually call a 1 year old. During autumn migration these birds would be 17 or 18 months old. “After-hatch-year” indicates the bird could be a second-year or older, but we might not be able to tell. “After-second-year” means just that. The bird is at least a third year bird, at least 2 years old, or at least 29-30 months old. A Second-year bird is also a After-hatch-year, but Second-year is more precise if we can definitively conclude its age.

Each year at IBO we usually band 15 – 20 Northern Goshawks (out of 1000-1200 total raptors), but they are almost always Hatch-year birds. Last year we had one After-hatch-year. This year we banded three, all Second-year birds. The orange eye in the photo is indicative of a Second-year bird, but not conclusive. We used feather molt patterns to age this one; the bird still had some feathers that were juvenile. 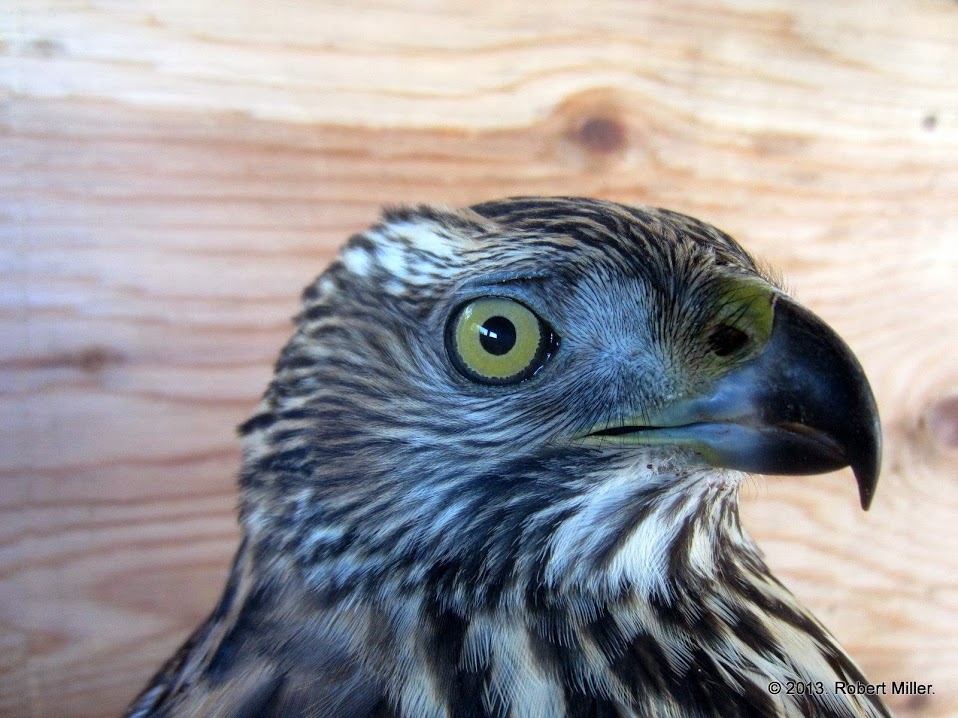 The hatch-year feathers of a Northern Goshawk are brown instead of gray. During this birds second year it will molt its feathers to look like the second year bird above. Its eye will change from yellow to orange and eventually to red. Note, the eyes are blue when they are nestlings! 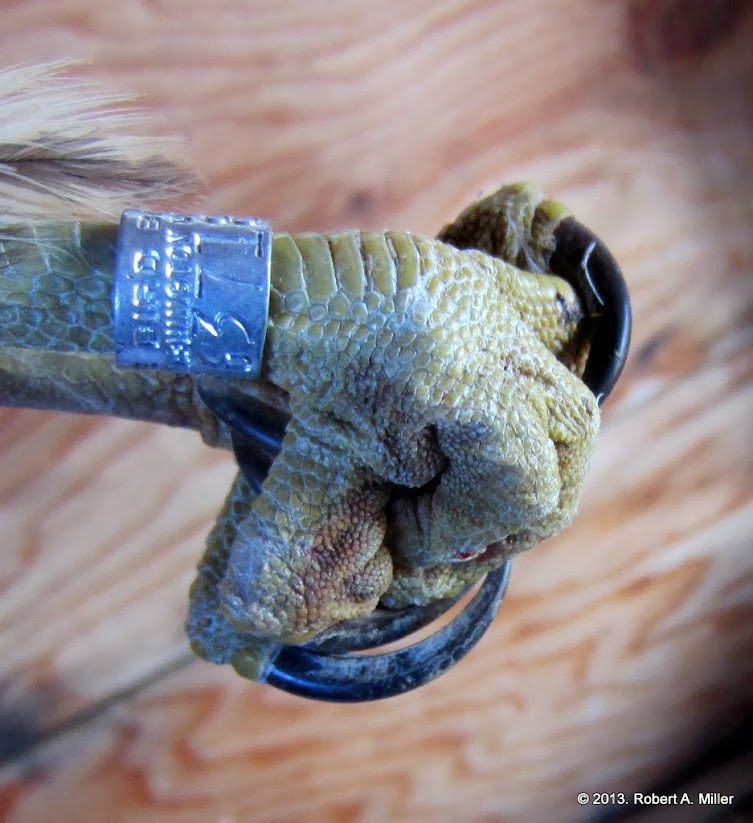 For four years I have been trying to catch a Peregrine Falcon. I have been there when other have trapped them, but have not gotten one myself. That all changed this year. 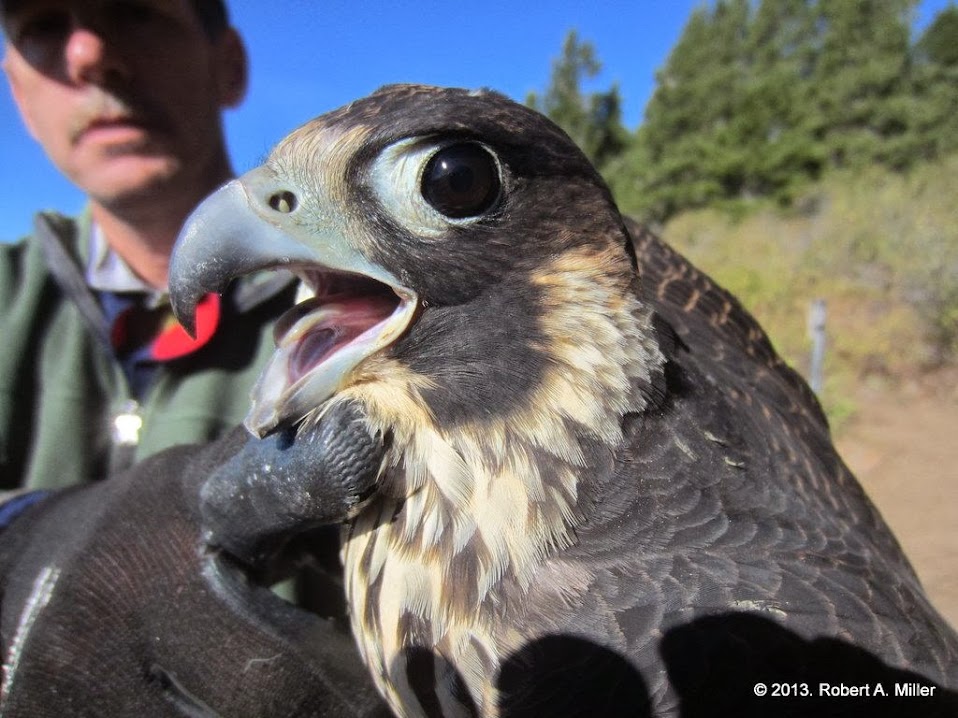 Among other indicators, the blue around the eye and cere indicate this is a hatch-year bird. 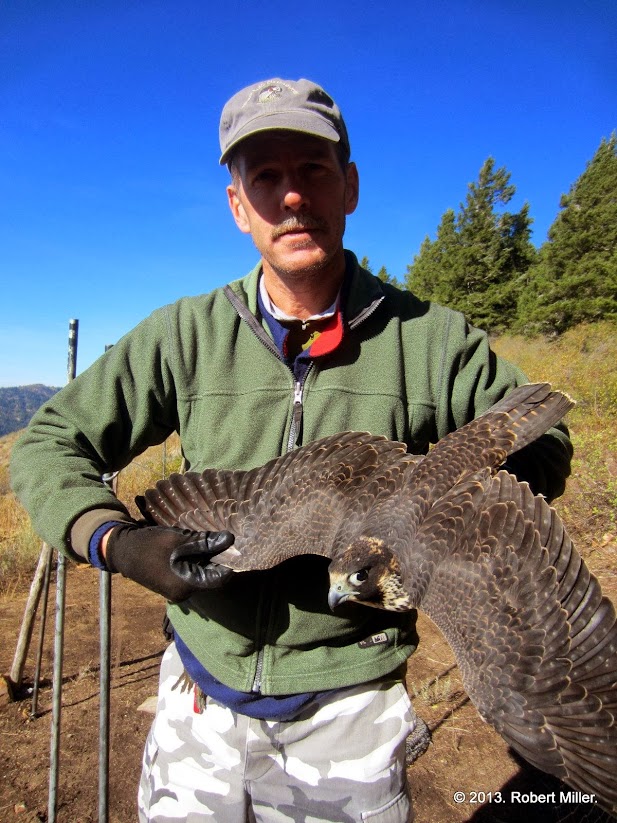 For the past five years IBO has been in a drought when it comes to capturing Northern Harriers. That would change this year, and in a big way. We as a team trapped 12 harriers of all age and sex combinations. I trapped two. 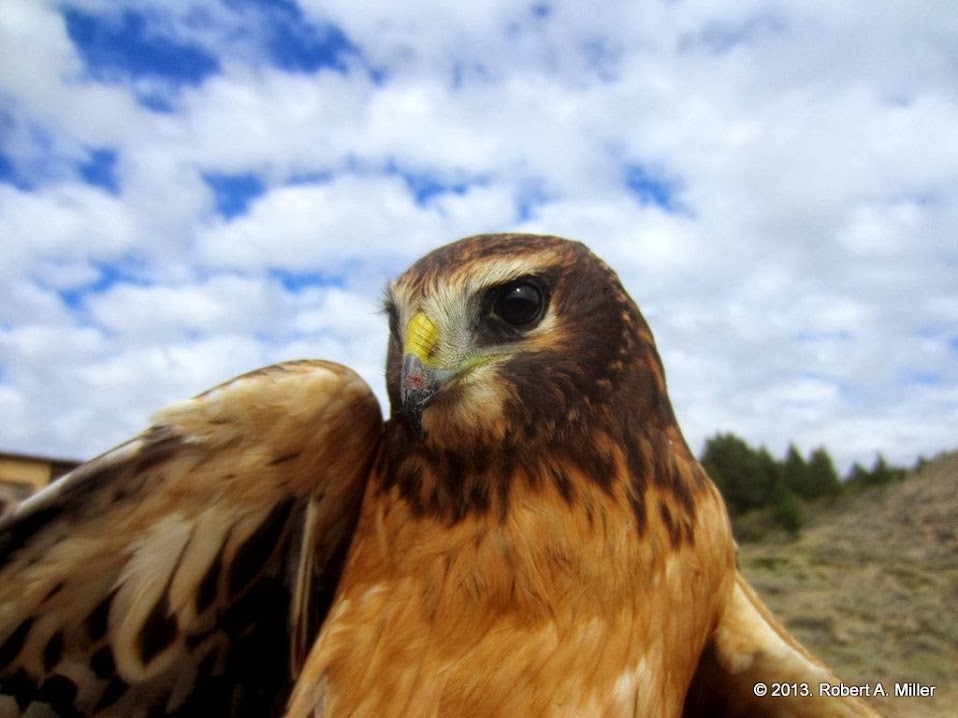 Note the eye color change. The female hatch-year birds have dark eyes, but the males do not. The Northern Harrier is very common in our area, we just don’t trap them often. In 20 years we have now trapped 74 harriers. In 1997 they trapped 13, in 1999 they trapped 9. The next highest count was 6.

In other rarely trapped birds, over the past 20 years the team has trapped only six Broad-winged Hawks. I had the honor of making that seven. The Broad-wing is very common in the east, but is rarely scene in Idaho. Our hawkwatch team (team that sits on the mountain and counts every migrating raptor they see) usually count on average 30 Broad-wings per year, although the number has been rising in recent years. 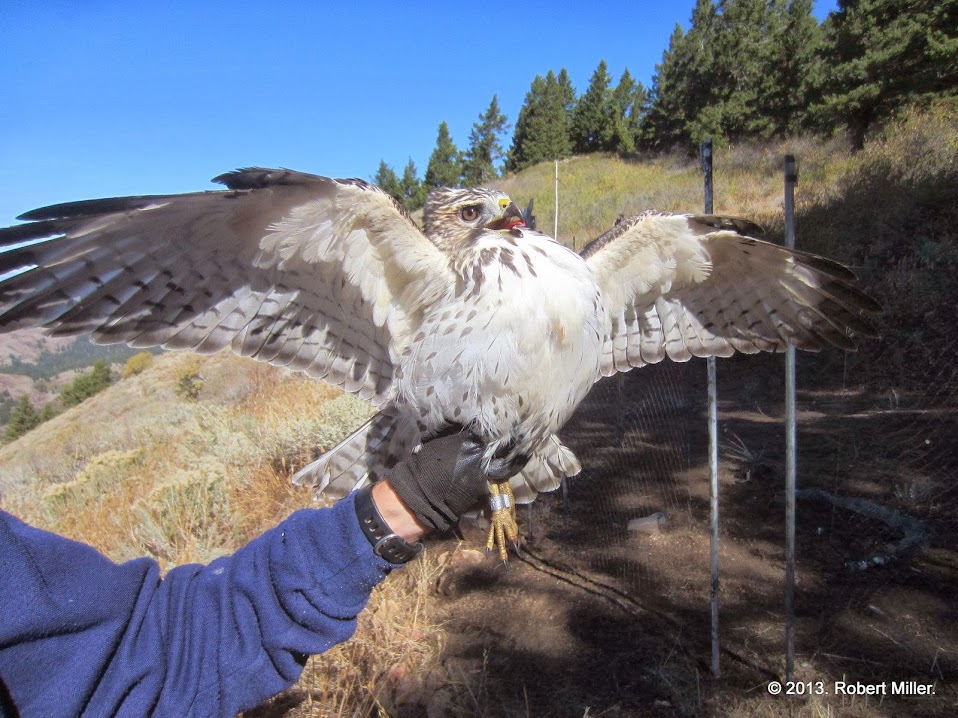 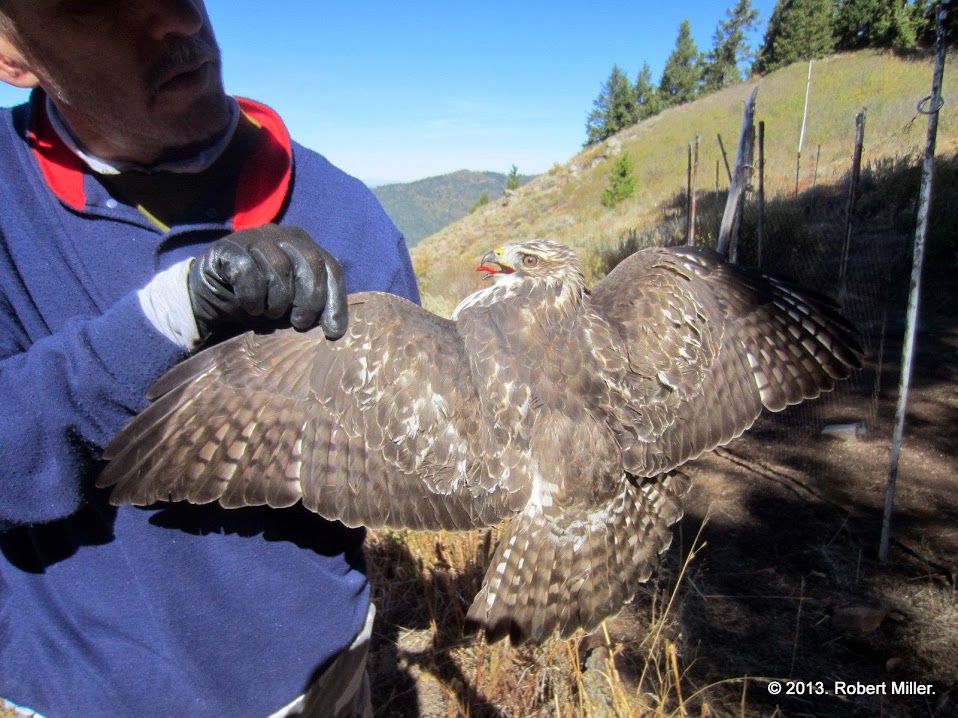 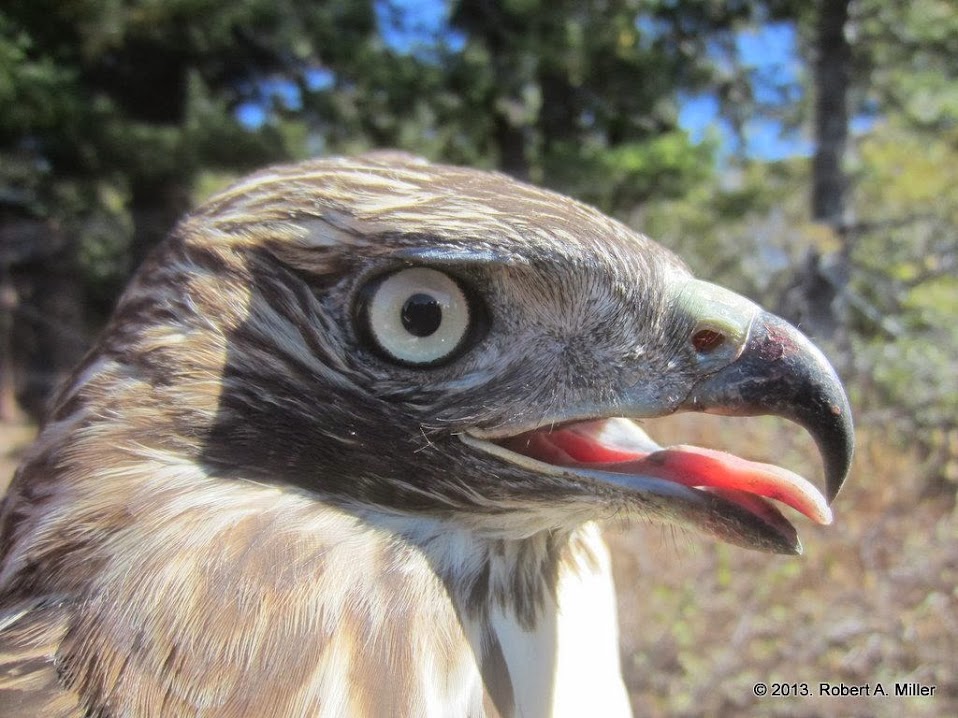 Most of the Red-tailed Hawks we trap are hatch-year birds, but this year we had a surprising number of adults (3 or 4?). 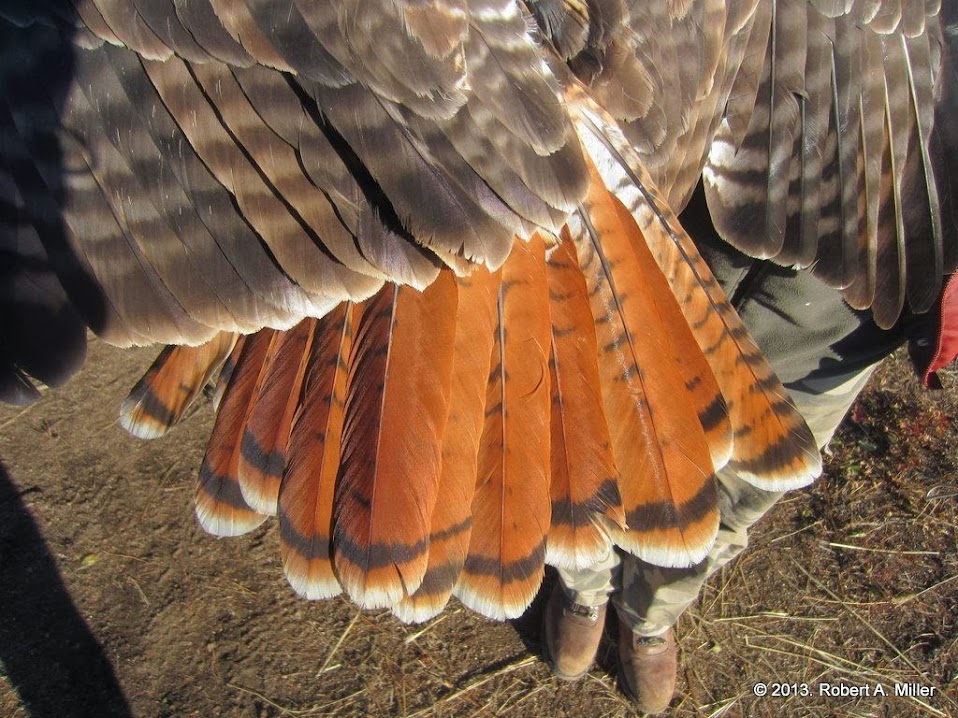 Merlins! We trap between 15 and 20 Merlins each year, but they are always a favorite. I ended up with 4 myself including the expected columbarius sub-species and one likely suckleyi sub-species. 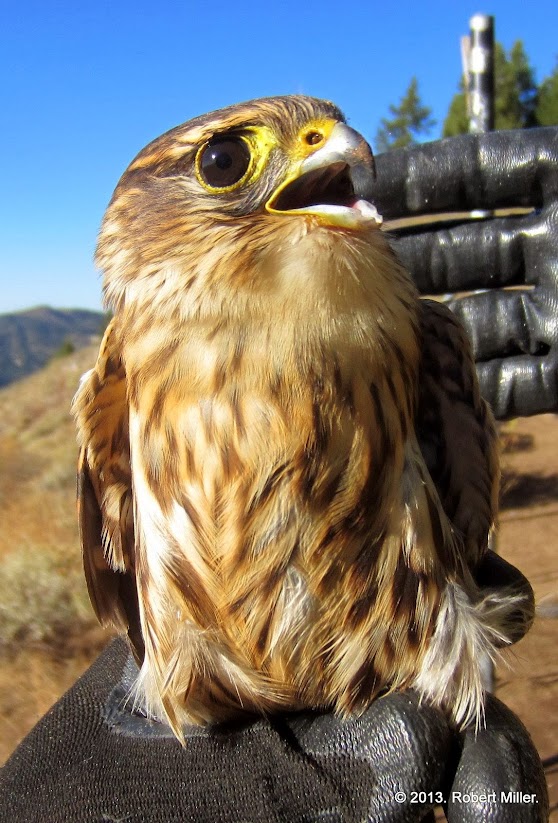 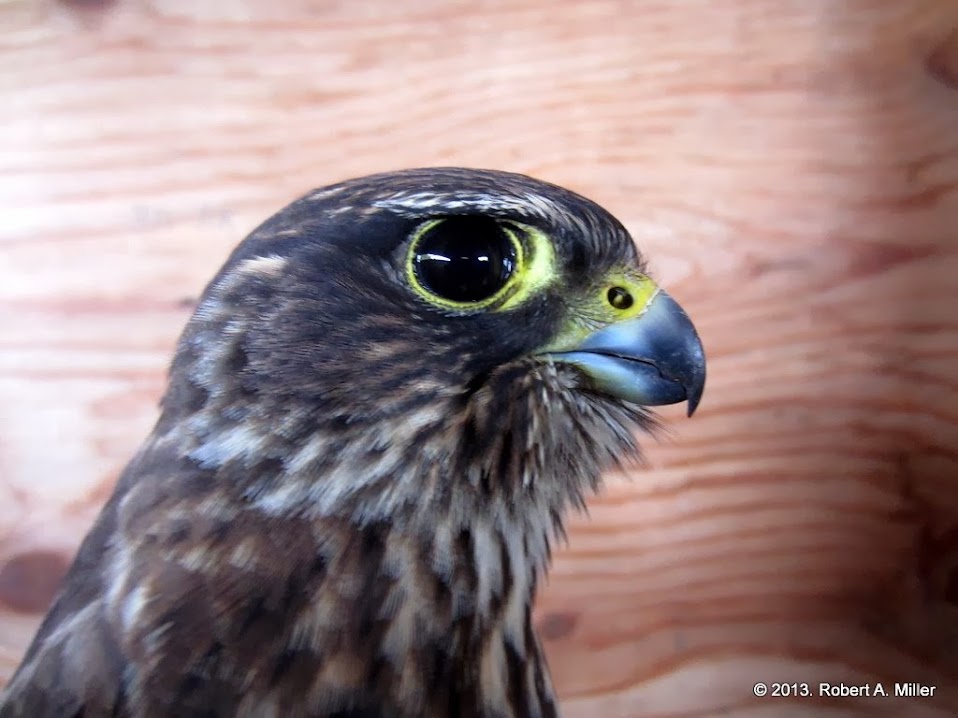 The most abundance birds we band are the smaller Accipiter Hawks – Sharp-shinned Hawk and Cooper’s Hawk. 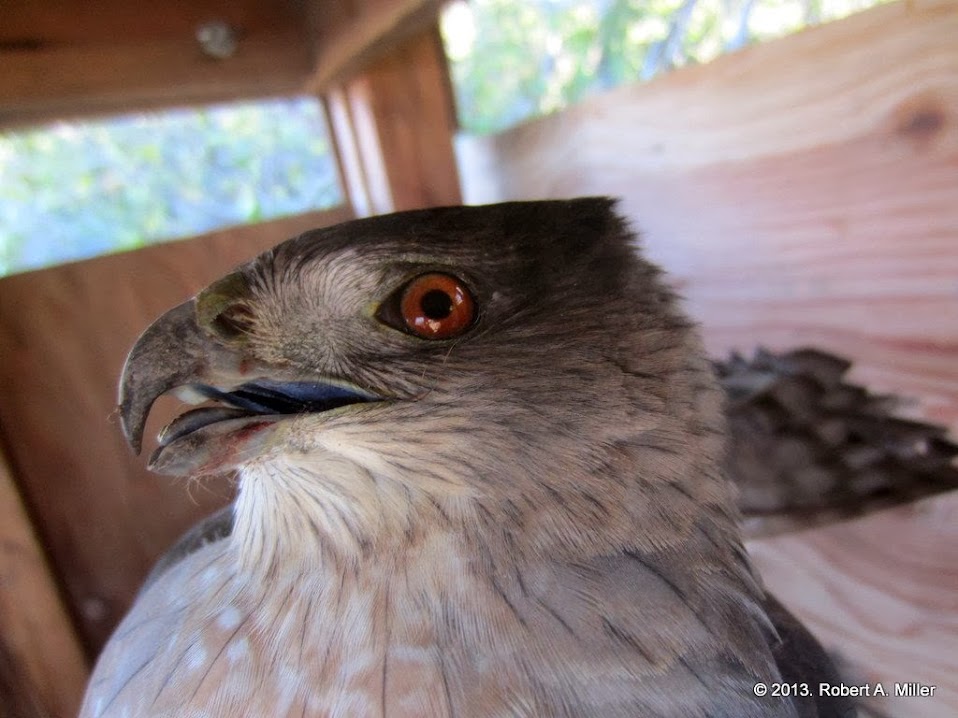 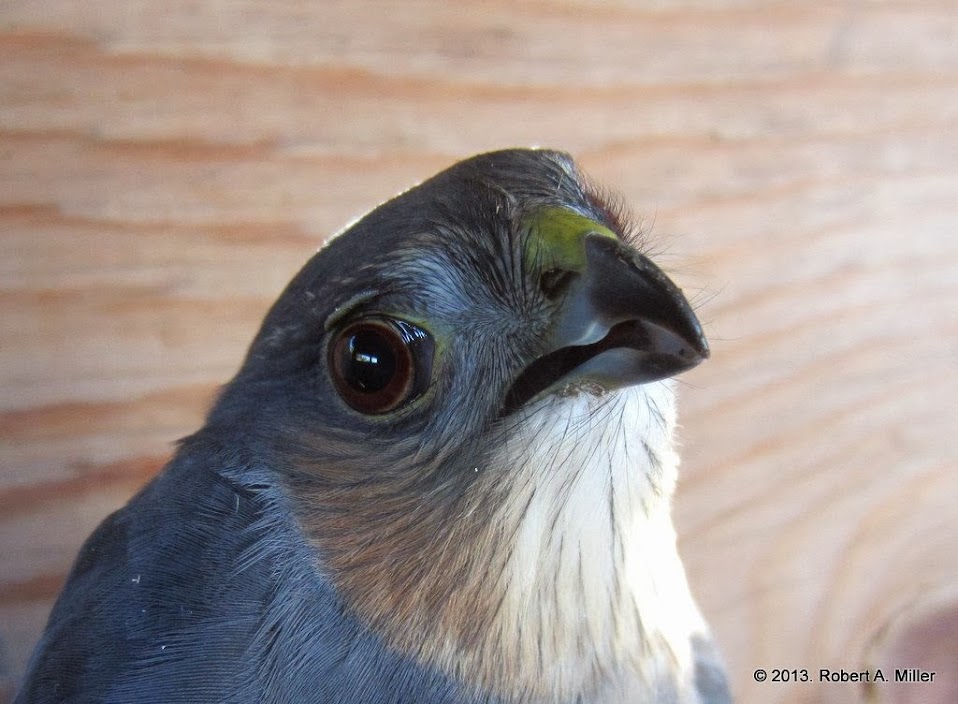 I guess I didn’t take any picture of American Kestrels. They are our third most abundant bird and I banded a number this year.

We occasionally capture birds in the mist-net that are not raptors. Last year I had a Steller’s Jay and this year it was a Pileated Woodpecker. 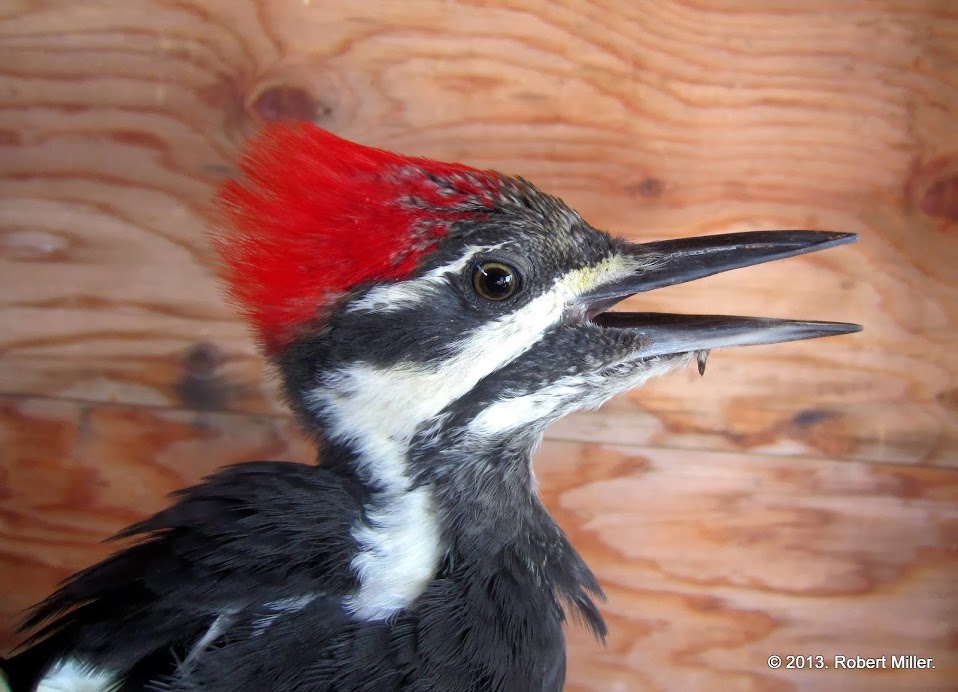 That brings to a close my fall trapping season. It was a great, but rushed season. In a few weeks I will start a new job of winter banding resident American Kestrels for a population study.