For the past month I have been travelling around two forests in Idaho surveying for woodpeckers, the Boise National Forest and the Caribou-Targhee National Forest (previous stories: The faint sound of drumming and Snow and freezing temperatures can’t keep us away! The woodpeckers are calling!). My field work on these project is now complete. The rest of the Caribou-Targhee field team finishes up in two weeks, but my analysis and reporting on this project won’t be complete until this fall. After a month in the field, this week I have a few days of work in the office, some vacation time next week, and then I begin field work on the third woodpecker project of the year – Black-backed Woodpecker surveys for the Boise National Forest. After that, my favorite project – Northern Goshawks!

The Boise National Forest project is tasked with surveying for Pileated and White-headed Woodpeckers, two of the Management Indicator Species for the forest. Each survey consists of 10 points separated by at least 300 meters. At each point we implement a 10-minute protocol consisting of 5 minutes of silent listening, followed by 5 minutes of White-headed Woodpecker call playback/listening. During the 10 minutes we note all bird species that can be identified. The surveys begin 30 minutes before sunrise and must finish by 10am, but we usually finish them by 9am, especially as sunrise gets earlier. 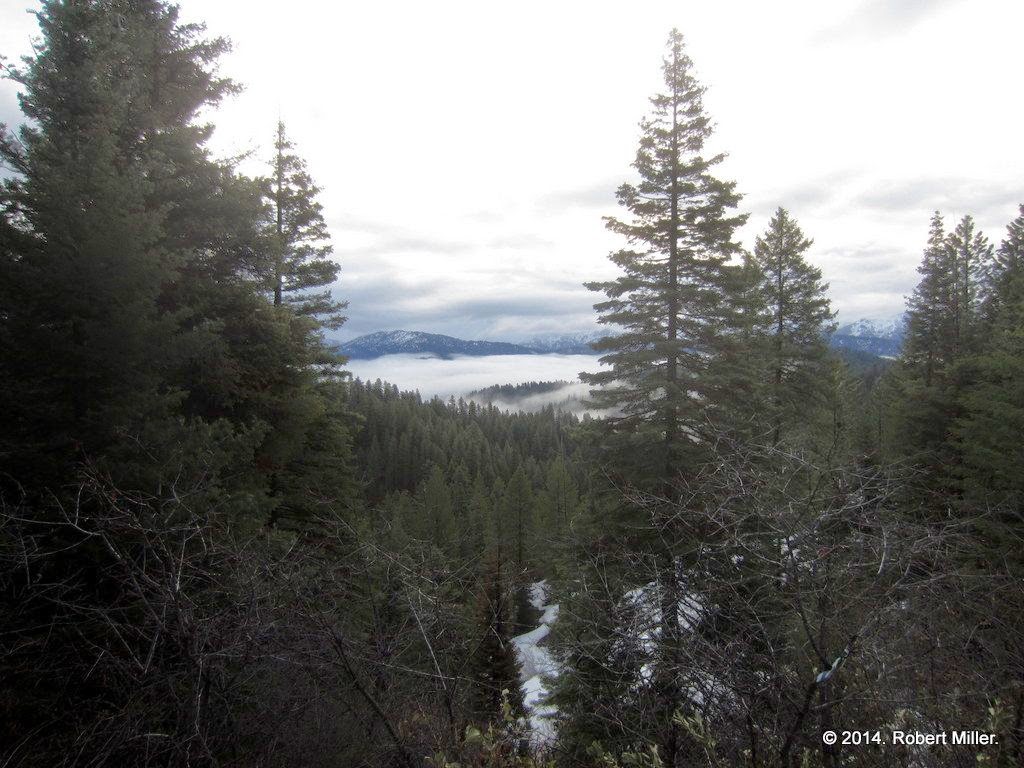 I completed 16 of the 25 surveys that the Intermountain Bird Observatory was tasked with completing. Another field technician (Jeff) is completing the other nine surveys. Unfortunately, I failed to detect any White-headed Woodpeckers on my survey routes. I did have Pileated on about half of my surveys. 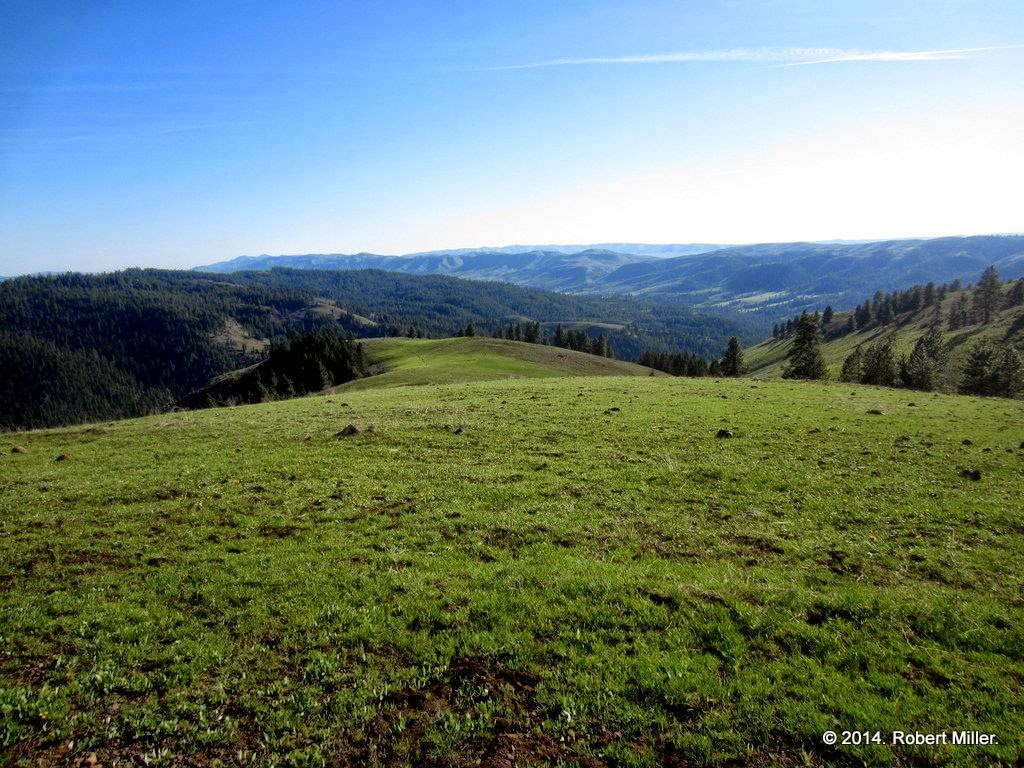 Some survey point are uneventful with little bird movement and not a lot of diversity. However, occasionally the birds test your attention. On the point illustrated in the photo, I would identify single birds and then they would fly to join their mate. This was an interesting point as I was also amongst a herd of elk and deer. I spooked some of them up as I approached the point before daylight.

Datasheet from point with quite a bit of bird movement.

I usually work alone, but Karyn was able to join me for a couple of surveys. She was there for the day of the ticks – I had 7 and she had 2! I hate ticks. But she was also there for Rattlesnake Ridge, one of my favorite routes. This year we had to post-hole through quite a bit of snow. At some points the wind approached the limits of a valid survey (20 mph). However, we did have many woodpeckers including Hairy Woodpeckers, Williamson’s Sapsuckers, Northern Flickers and Black-backed Woodpeckers. You can note in the video, the higher portions of the survey pass through a burn which is where we found the Black-backed Woodpeckers, burn specialists.

360 degree view from near the top of Rattlesnake Ridge, north of Crouch, Idaho. (video by Karyn)

As I noted in a previous report, we occasionally find signs of wildlife if not the wildlife itself. I was blessed this year with multiple sightings of fresh wolf tracks, bear tracks, mountain lion tracks, bobcat tracks, and moose tracks. It is great to know that all of these animals are out in the woods. I just wish I would have seen some of them. As I was entering many areas where no one else had been this spring, it was a great opportunity to see large herds of elk and deer as well. 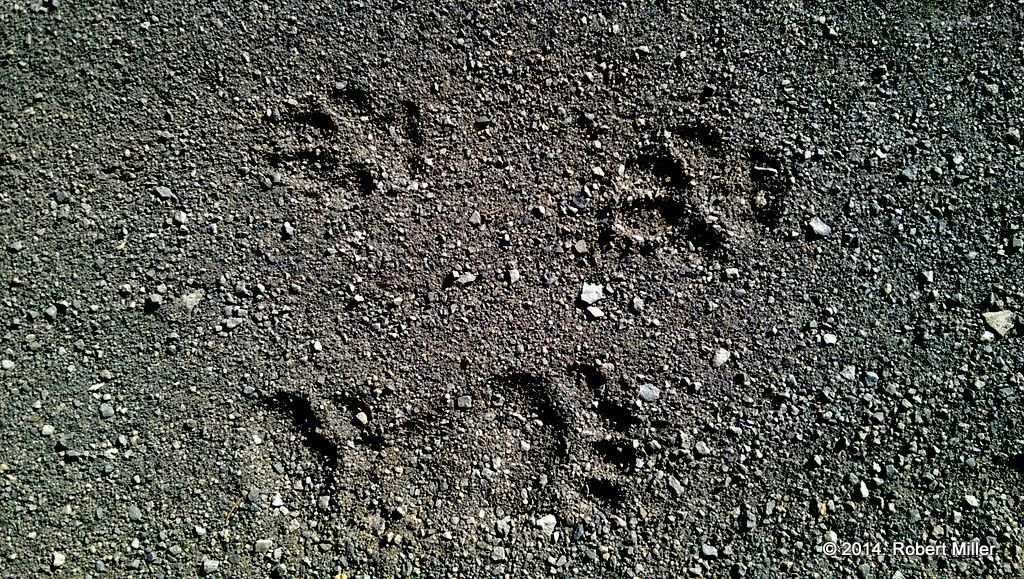 Wolf tracks and Black bear tracks in a single photo!

My role on the Caribou-Targhee Woodpecker project involves many aspects including study design, training the crew, some limited fieldwork, and then data analysis and reporting. This past week I went back to eastern Idaho to cover a few more transects to help the team catch up after a number of “weather days” where conditions did not allow the team to survey. That’s one of the challenges of these projects, they must be completed on a certain timeline and the conditions don’t always support that.

My transect was located in the Lone Pine Valley of eastern Idaho, an area without Grizzly Bears so I was able to work alone (we usually work in pairs in grizzly country). As you can see, there is still a fair amount of snow there! 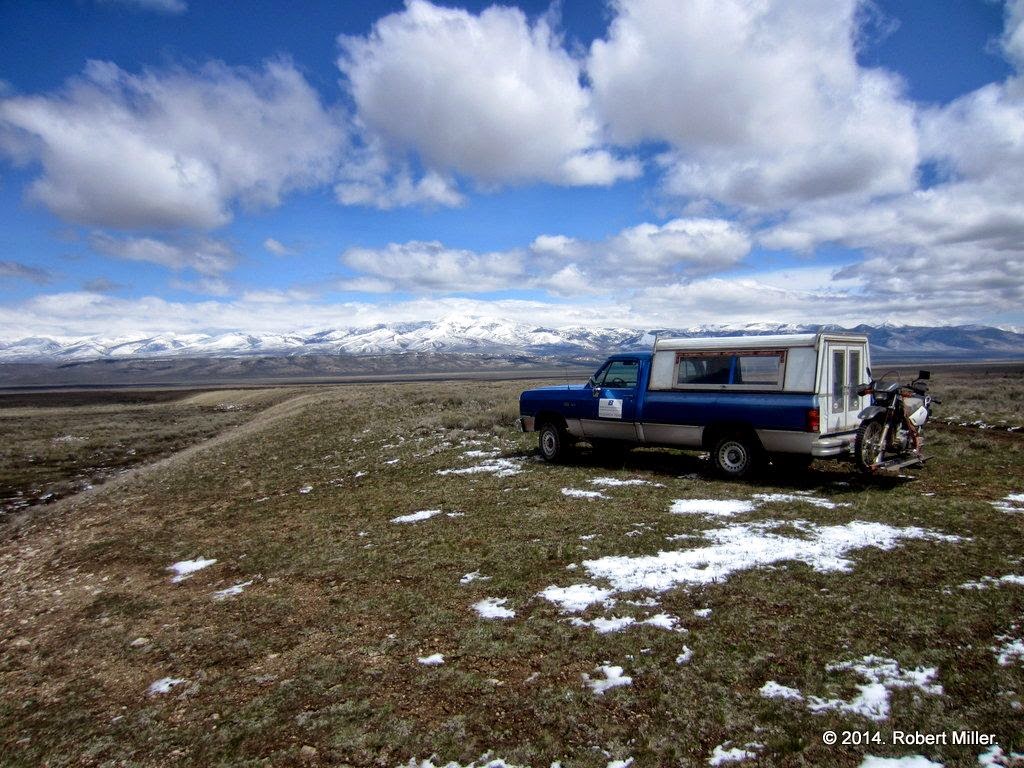 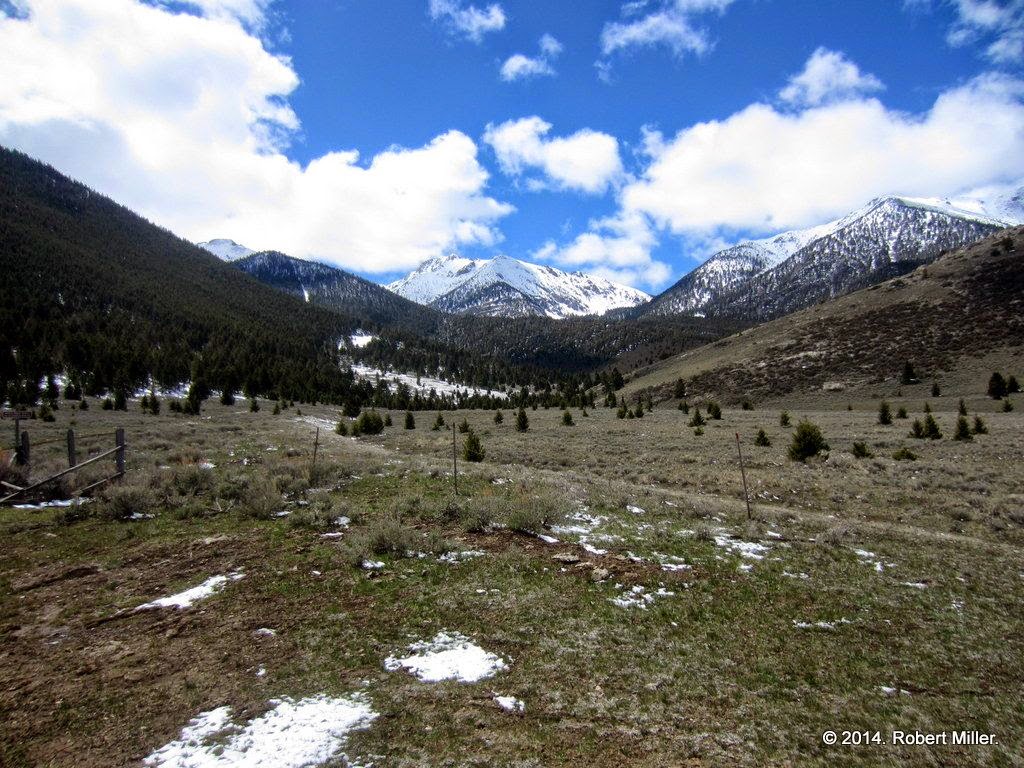 Survey transect is 1.6 miles up this valley to the right.

The Caribou-Targhee survey consists of four points, each separated by 500 meters. Unlike the Boise National Forest, these surveys are located off trail within grids placed randomly on the landscape. Fewer points, greater spacing, and off trail. In the Caribou-Targhee we are surveying for eight species of woodpeckers, including playback of calls of each species, so it takes 22 minutes to complete a survey point. Add another five minutes to complete the “veg sampling” (documenting the vegetation within 50 meters of the point). That’s a long time to stand in one place on a cold morning. This morning was my coldest morning. The temperature hovered around 15 degrees F when I set out. Temperature is not usually the problem, it is usually the wind. On this morning there was a steady 10 mph breeze ensuring that any body heat I retained was quickly whisked away. I was very happy to arrive at my third point of the morning where I was greeted by the sun! Beautiful! It would still be hours later before I could feel my hands or feet… 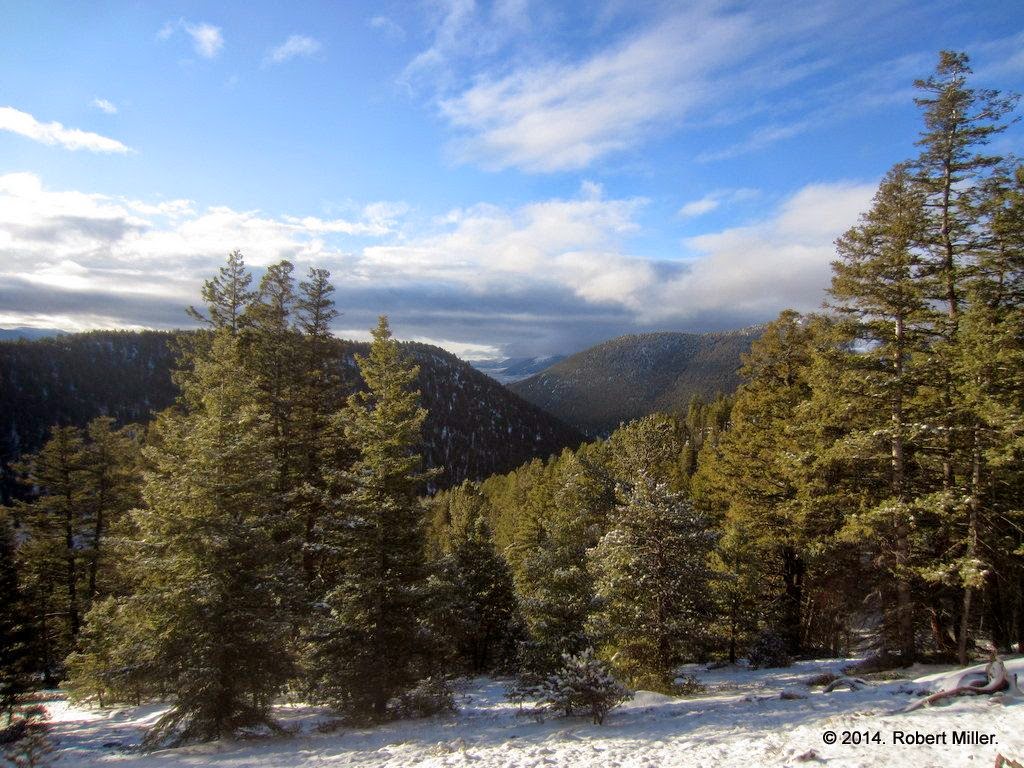 View from third survey point back down the canyon toward my camp. 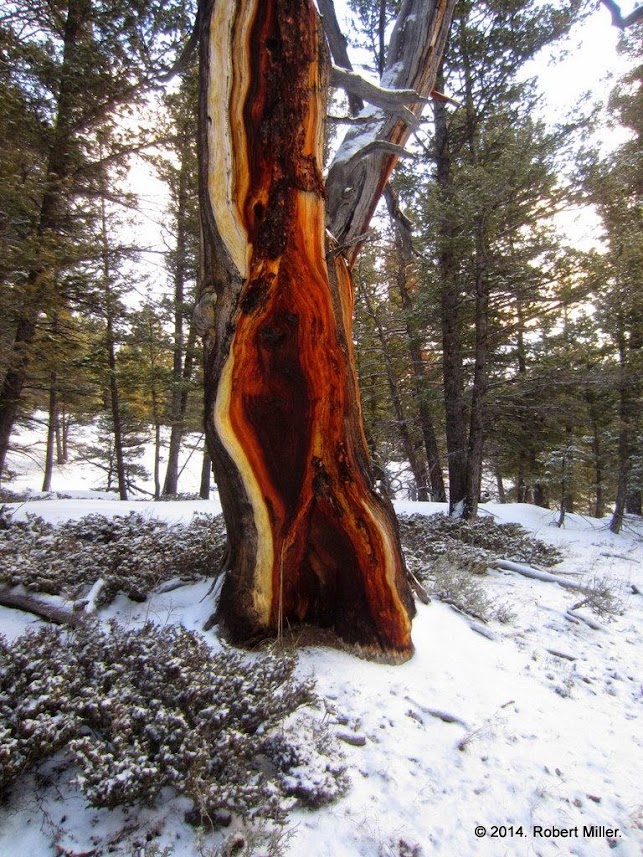 Snags are very important for woodpeckers and other songbirds, Caribou-Targhee National Forest.

It is not just about the woodpeckers. Woodpeckers are primary excavators, many creating a new nest cavity for each breeding attempt. Those old cavities are then used by other species. In North America there are over 55 avian species that nest in tree cavities. This represents 30-45 percent of avian species that use the forest. A single cavity can be used by different species for more than 30 years! Without woodpeckers, many other species, for example bluebirds, would not be able to use the forest. Fewer snags = fewer woodpeckers = fewer birds in general = more insects… 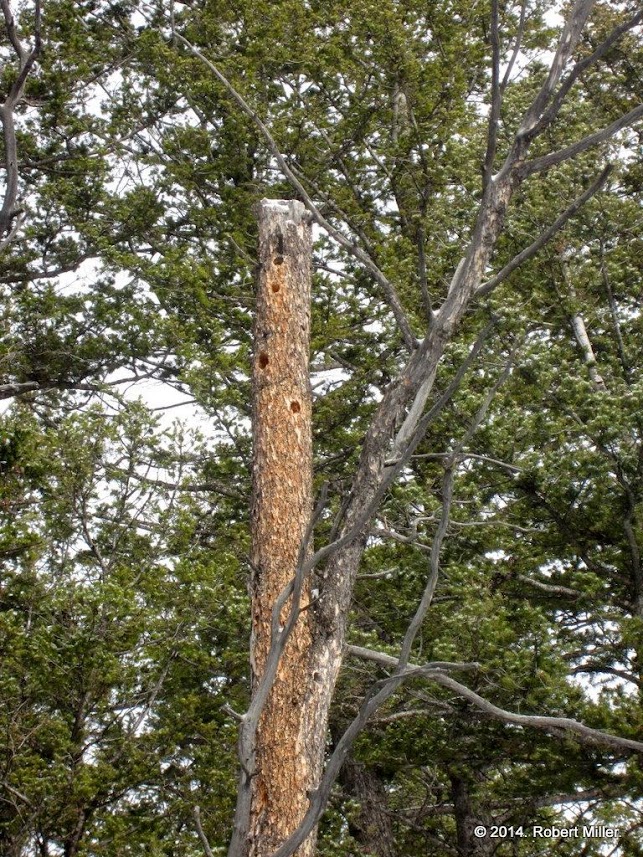 With a number of large fires in Idaho over the past few years, salvage logging has become big business. En route to one of my survey locations in the Boise National Forest, I passed this logging operation. The fire had altered the habitat, making it less attractive to some species, but more attractive to others (e.g., Black-backed Woodpeckers, Mountain Bluebirds, etc.). But now humans have transitioned this land away from forest, possibly for a very long time. The non-forest species will have to take over now. 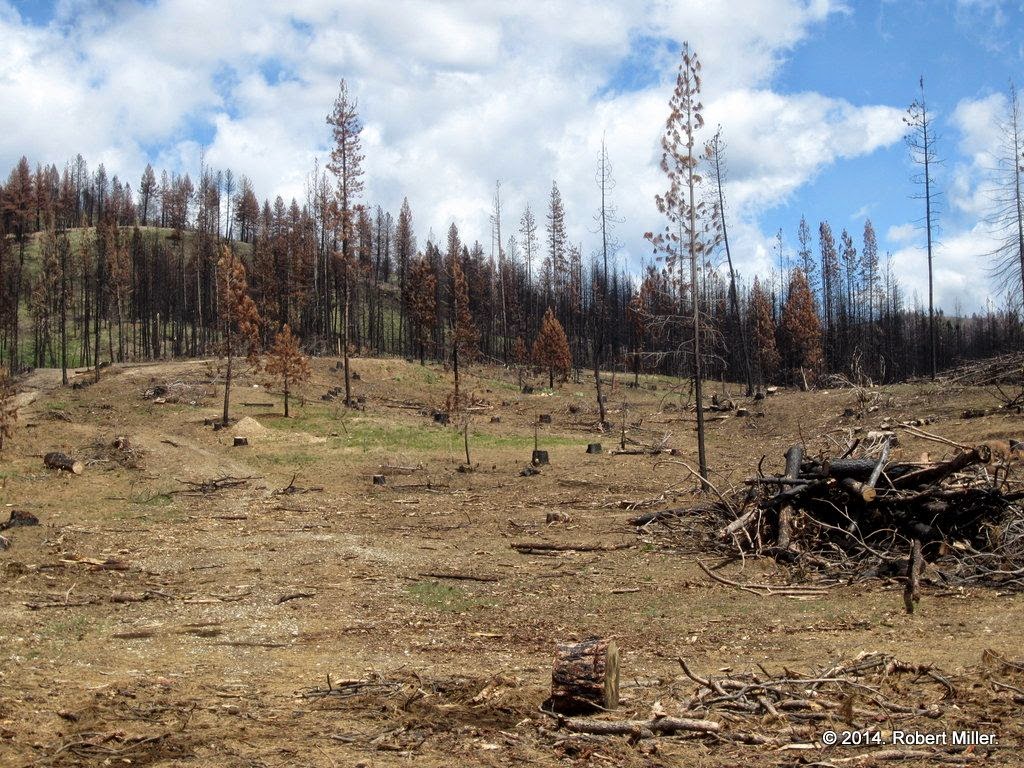 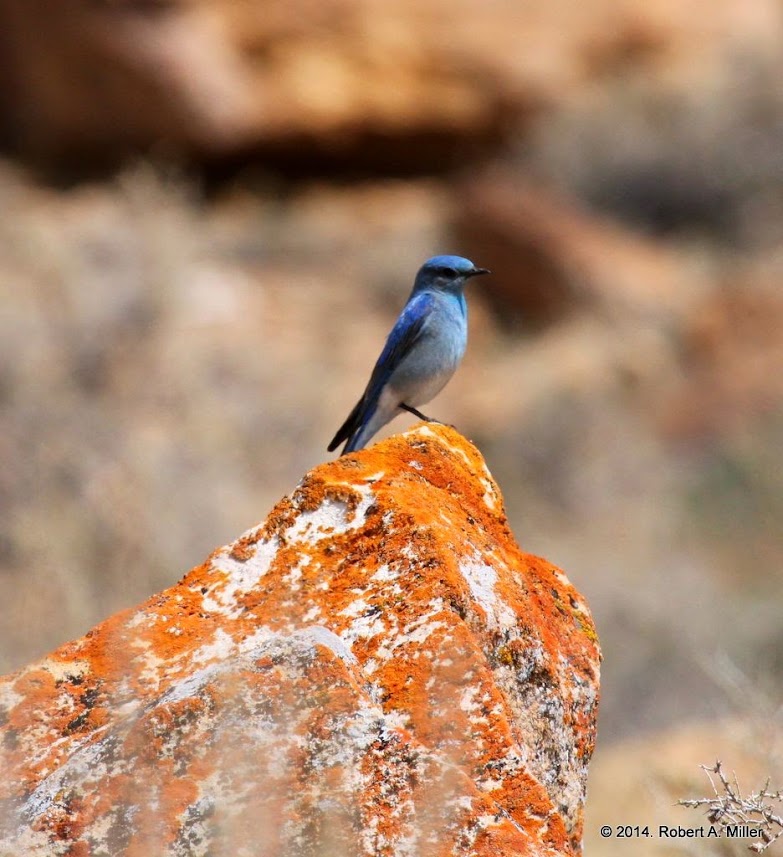 Mountain Bluebird, one of many cavity nesting songbirds in North America.

My next field project kicks off the first of June. This project involves surveying for Black-backed Woodpeckers within the Boise National Forest. This is another project that we at the Intermountain Bird Observatory designed. I will only perform one week of surveys, but I have the responsibility for the data analysis and a portion of the final reporting. On June 9th, I begin five weeks of Northern Goshawk work in the Minidoka Ranger District of the Sawtooth National Forest in southern Idaho/northern Utah. I can hardly wait!!!