Karyn and I just recently spent a week long vacation hiking and wildlife watching in Yellowstone National Park. I managed to squeeze the trip in between my various field projects this spring. Yellowstone is always a great place to be, one of the few areas with a near complete ecological complement of animals without undue human pressure (although human impact is still quite prevalent…). We generally prefer visiting earlier in May to avoid the summer hoards, but it still worked out well.

One of our prime objectives is to observe wolves. The wolf population in the northern range of Yellowstone is lower than it has been for some time. With the expected natural decrease in the population after hitting its high after reintroduction, coupled with a few years of disease and key animals (alphas) being killed just outside the park boundaries, the sightings are rarer than in the past. However, we still had some great encounters.

On the first day entering the park we stopped at Elk Flat on the western side of the park and just happened to see a wolf walking through the meadow. It was great timing!

Gray Wolf of the Canyon Pack in Elk Flat with geothermal features in the background.

A bit more searching through the meadow and we found three other wolves bedded down. It appeared that they had a carcass just out of sight. We watched as each made their way across the meadow and up toward their presumed den area. We changed our plans and found a campsite at Norris so that we could extend our observations.  We watched them again in the evening as each wolf came back one by one to access the carcass. 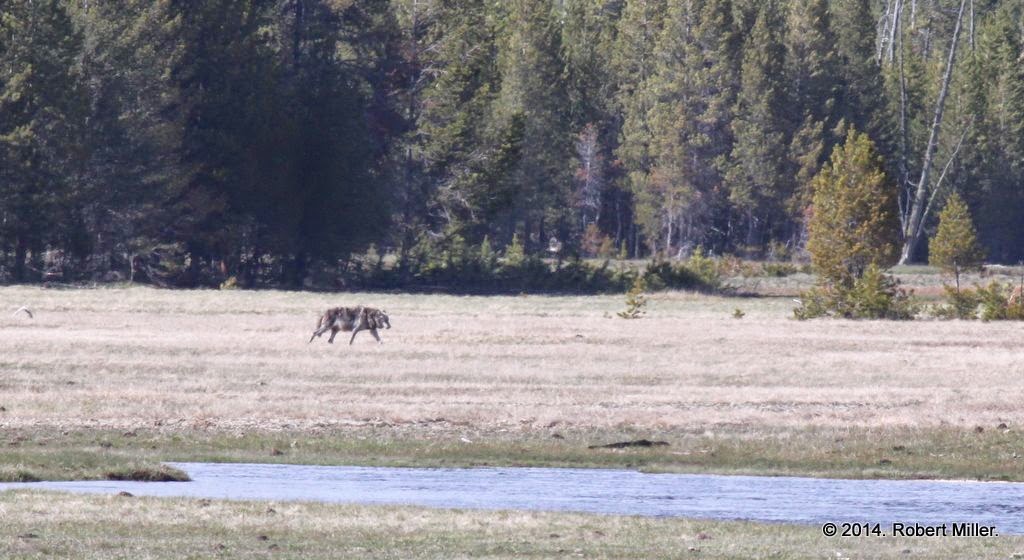 Member of Canyon pack heading back to the presumed den area.

It is common for all members of the pack to take food to the young. As wolves greet the puppies they will regurgitate food for them and any other pack members that remained behind during the hunt. Thus, it is common for the same wolf to return to the carcass, even if they had recently fed.

Wolves will sometimes carry pieces of the carcass back to the den area for the puppies. In this case, it appears that it is a portion of an elk calf. Since the carcass was clearly larger than a calf, we expect it consisted of the cow elk and the calf. We once watched the alpha male of the Druid wolf pack (wolf 21m) try to take an elk calf. The female elk came in to defend the calf, so the wolf switched to focus on her. I expect that this cow and calf combination kill happens fairly often during the calfing season. 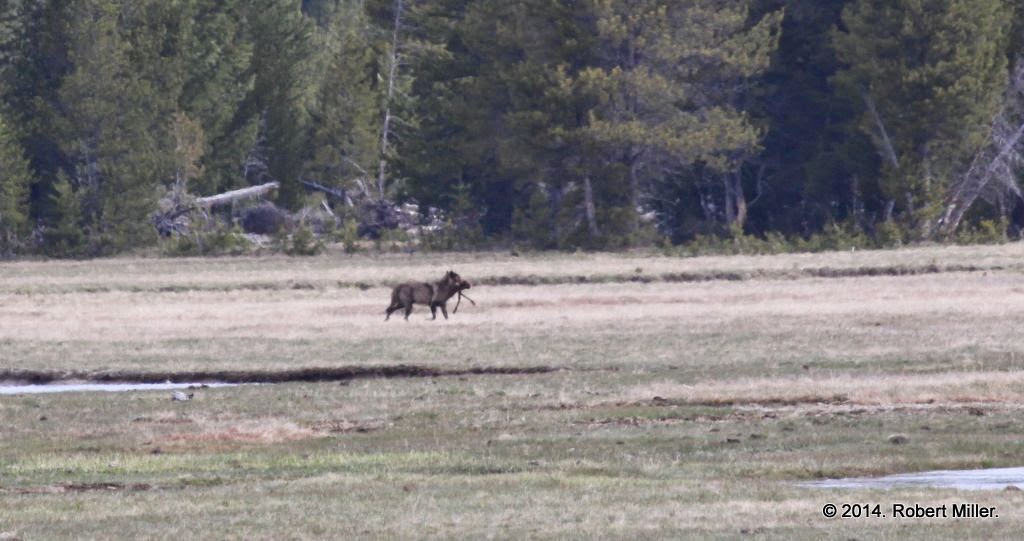 Alpha male carries portion of carcass toward the den.

The highlight of the Canyon pack is the alpha female. This wolf is one of the few very white wolves that have occurred in the lower 48 state populations. I am only aware of three “white’ wolves. One was killed in Idaho, one was alpha female of the Hayden pack and was killed by other wolves in central Yellowstone, and the current alpha female of the Canyon pack (pictured below) who is the daughter of the alpha of the Hayden pack that was killed. Years ago we had gone searching for the Hayden white female on a number of occasions, without success. We were very excited to see her daughter in Elk Flat! 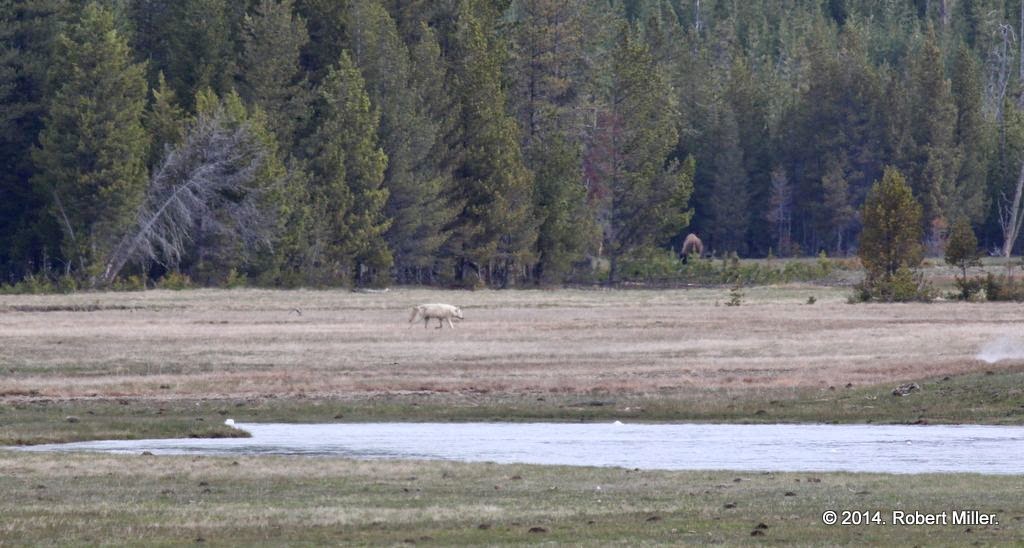 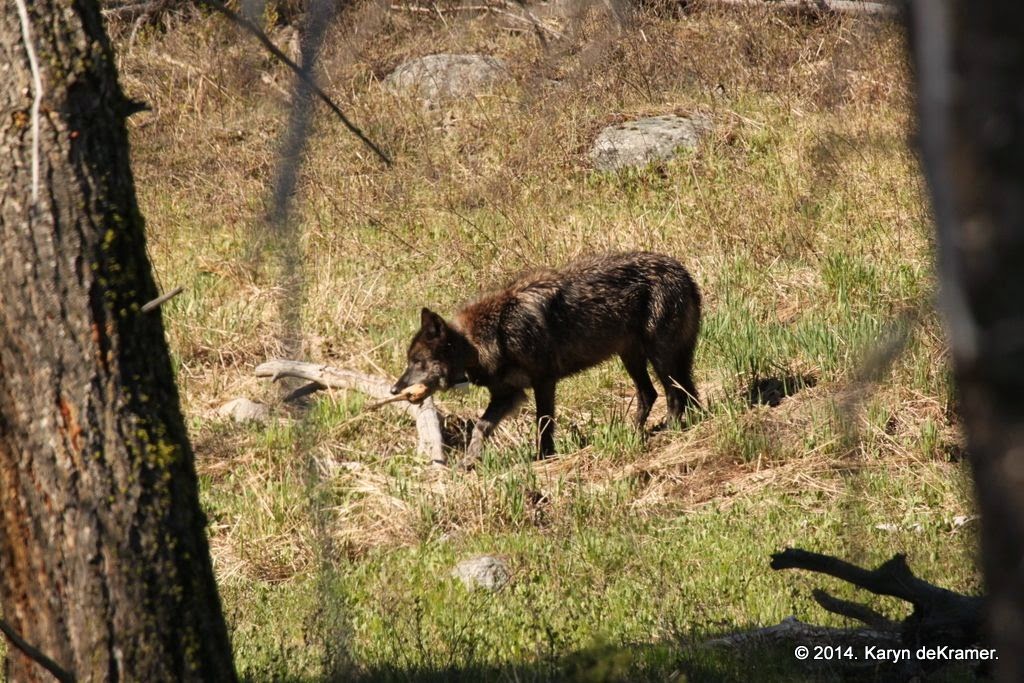 We watched the Junction Butte pack on a recent elk carcass and on an older bison carcass. We seem to continually miss the Lamar Canyon pack until our last day when one of the wolves had taken a bison calf. We watched as she returned from the carcass to the den area and as another wolf visited the carcass and carried a portion back to the den. 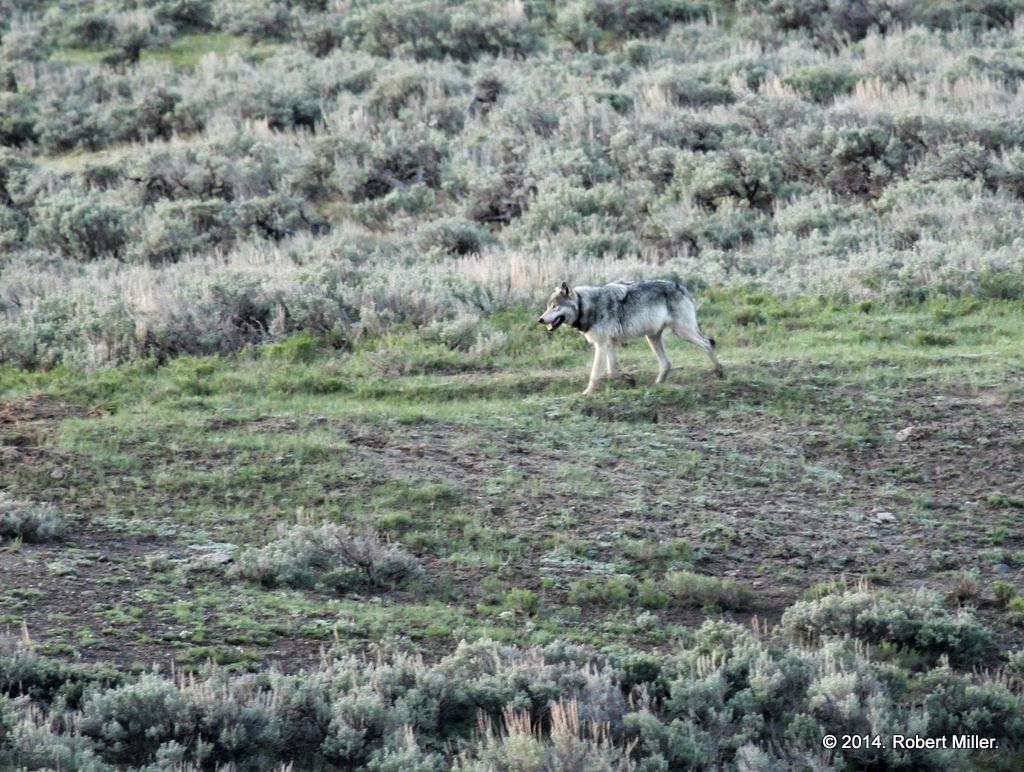 Lamar Canyon wolf heading back to den with a stomach full of bison. 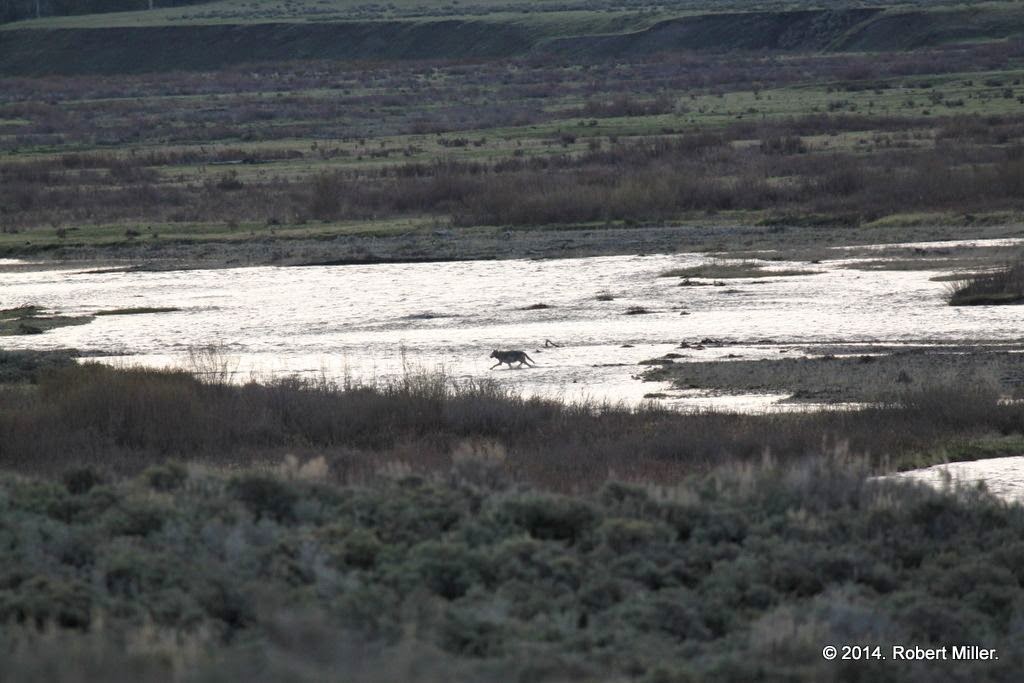 We had much more frequent sightings of bears. The highlight was finding the famed grizzly bear “Scarface” on a carcass only about 100 yards from the road. At the time he was sleeping on the carcass to prevent anyone else from getting at it. He later woke up and continued his meal. At the same time we could see two family groups, one with two yearling cubs, and one with two 2-year-old cubs, resulting in seven grizzly bears in sight at one time. 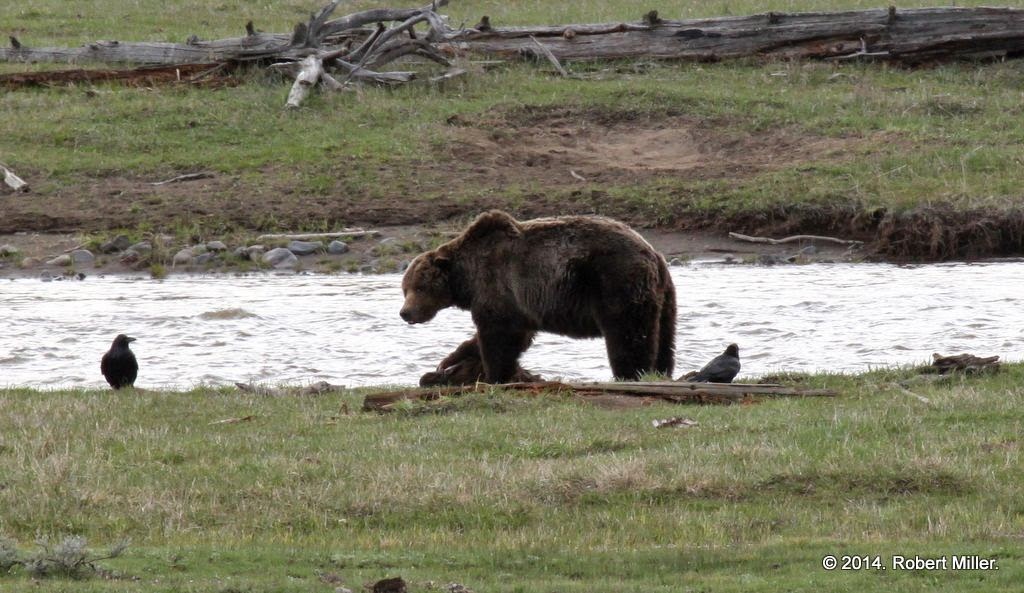 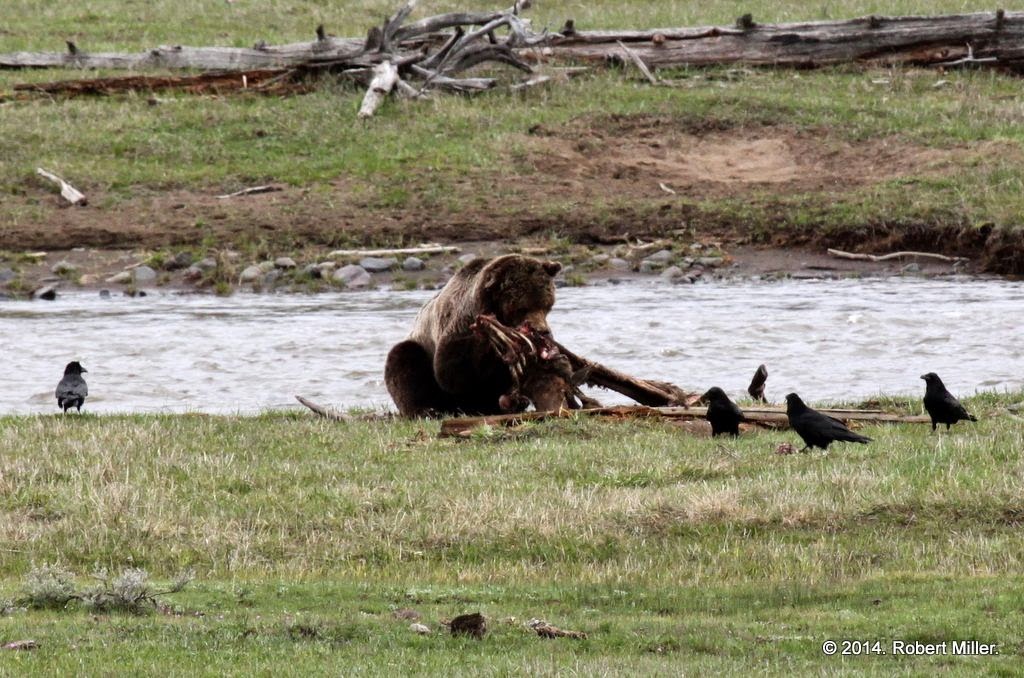 One day while watching wolves near Slough Creek, we heard over the radio that a grizzly bear was walking just below a group of wolf watchers on “Bob’s Knob”. Hey!, we were just below “Bob’s Knob”! We turned to see a grizzly running between ourselves and the other group. It is always a good idea to look behind you from time to time. 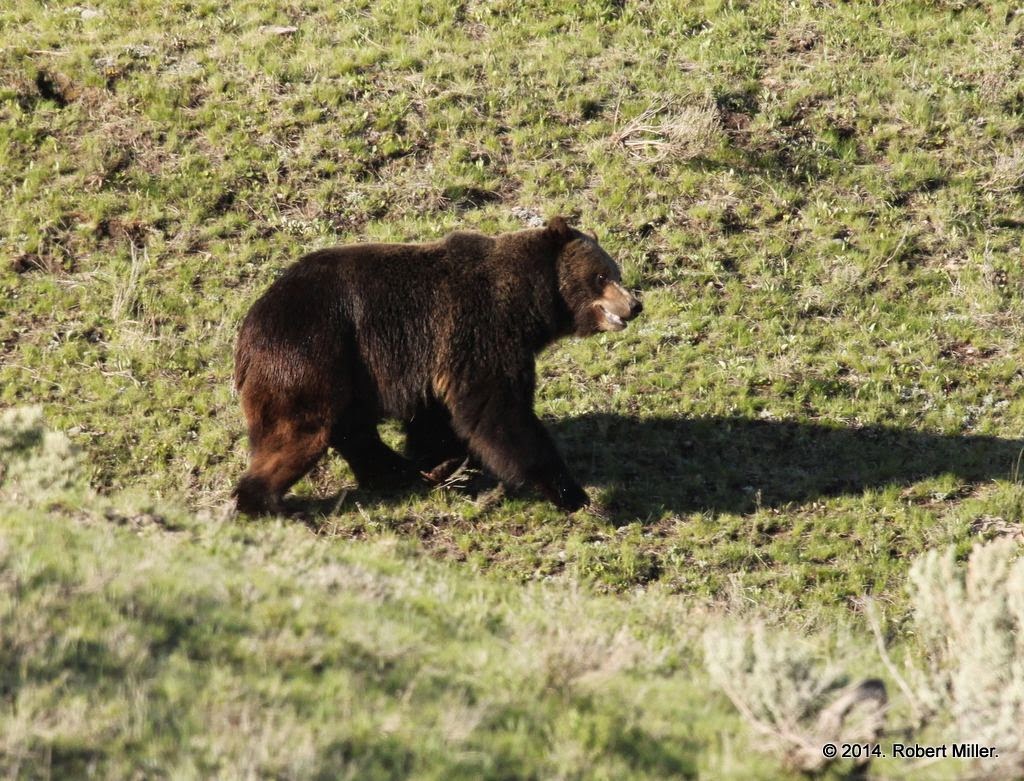 Grizzly bear sneaking in from behind! Slough Creek.

As far as the bear experts know there is only one grizzly cub-of-the-year in the Slough/Lamar Canyon area. We went looking for her, but didn’t find her at first. Later as we were driving, she appeared right in front of us. We watched as she crossed the road. 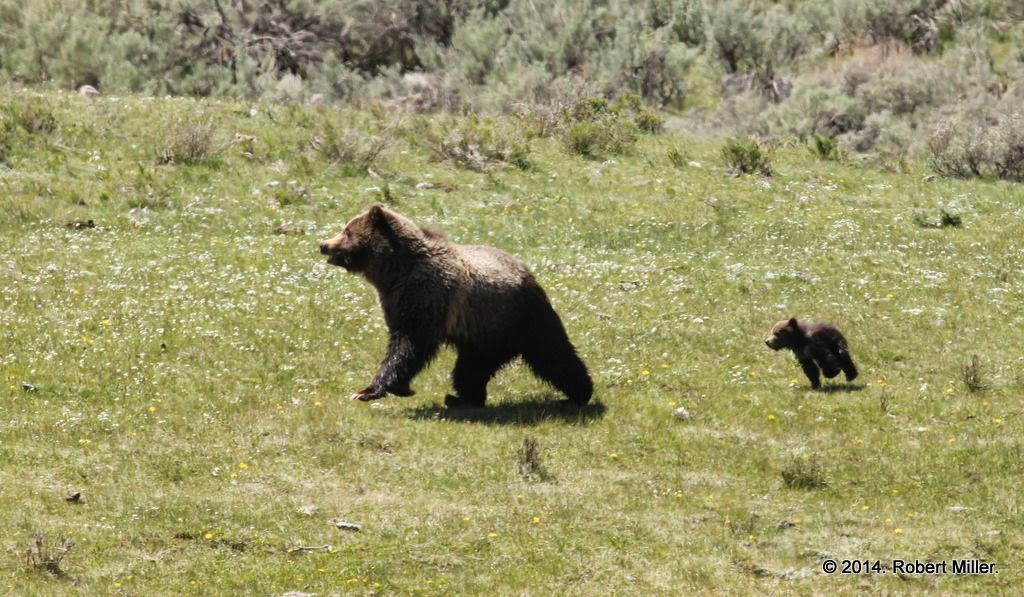 She was clearly stressed by the people and the traffic. Research has shown that young animals key into the stress of parents and carry it with them for the rest of their lives (the study was performed on Common Ravens, but I am sure that it applies to bears as well). This road crossing was probably an important lesson which the young bear will use to avoid people and cars throughout its life. That’s a good thing!

In total we observed at least 16 unique grizzly bears, probably a few more. In addition to those previously mentioned we observed two separate courting pairs and a handful of individuals. But not all of the attention was on the grizzlies. A female Black Bear had three cubs in the Tower Falls area. This of course, caused tremendous bear jams.

The cubs are amazing at climbing trees. Here is a video of how fast they can climb. Karyn believes that the sow was pointing them up the tree. I agree. 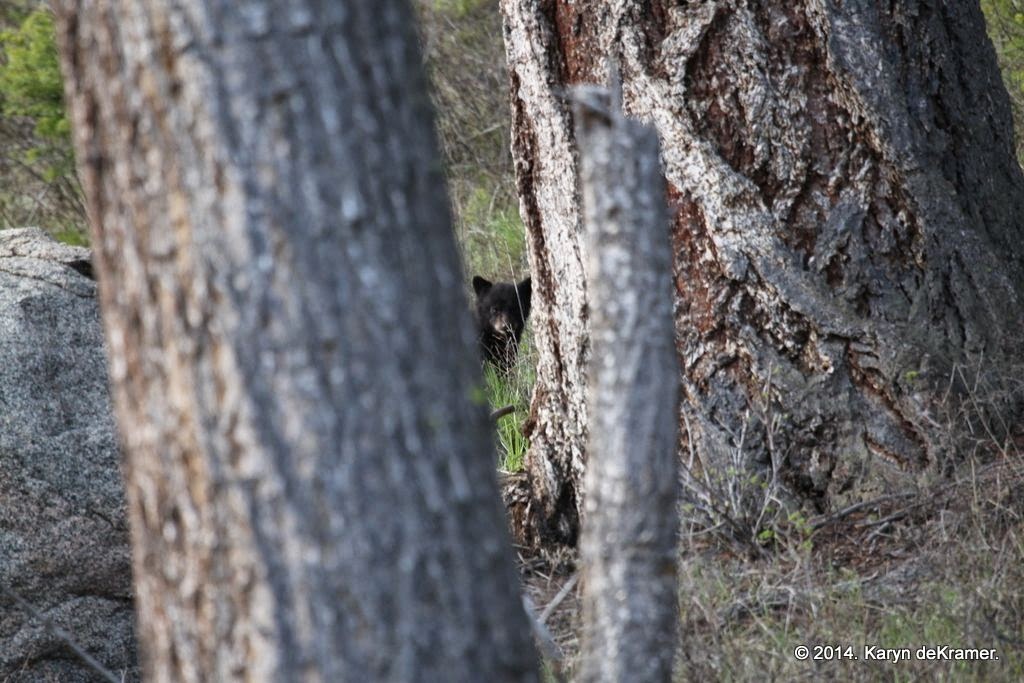 We also had two “three dog days”. Days in which we observed wolves, coyotes, and red fox in a single day. One day we had two red foxes come and scent mark rocks just outside our van when we were camping. On another the fox walked down a valley, apparently hunting. We observed him/her face off with a Yellow-bellied Marmot. 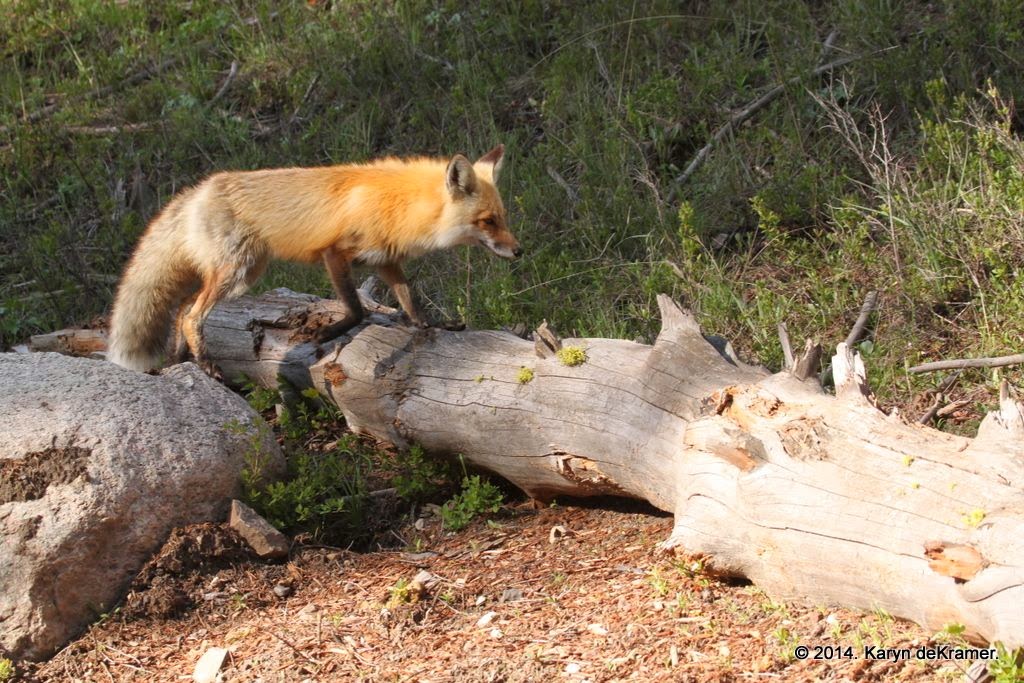 Check back for my next few posts which will highlight birds, other mammals, and other scenery.