Here’s the latest installment (5th) describing Karyn’s and my adventures living in Spain for two months studying the annual bird migration at the Strait of Gibraltar. We have just completed our third week here. The time is flying by, and not just because we are studying birds!

The trip is sponsored by the Migres Fundación and Boise State University’s Intermountain Bird Observatory. For more background, you may review my previous posts covering our time in Spain:

Post 4: In and Around Our Temporary Home in Pelayo, Spain

Our third week here was a mixture of work and play. After work tours and weekend journeys helped fill out a great week of work with the birds.

I spent two days in the office this week gathering and analyzing data for the joint research project I am leading with the Migres Fundación. It doesn’t sound very exciting, and at times it’s definitely not, but it is a very interesting project and it’s great to learn new insights from a unique migratory system. There are many aspects of migration that are similar between here and Idaho, but many others that are unique. For instance, the barriers provided by the Mediterranean Sea and the Sahara Desert are unequaled in North America. I plan to continue to work two days a week in the office while I am here in the hopes to get our joint research manuscript into full draft form before I head back to Idaho.

I spent three days counting the migration at the Cazalla count site. I continue to be amazed by the volume of the migration, on one day counting more than 3500 White Storks and more than 1600 Black Kites. The highlight of the week however was the Eleonora’s Falcon. This bird is a rare visitor to the Spanish coast. The day before, while I was in the office, they had seen one at Cazalla. As a result, I had studied up on the bird to be prepared should I encounter one. The very next day, shortly after the beginning of the count, I saw a large falcon with a long tail flying toward us. It didn’t match any other falcon I was aware of. It was the Eleonora’s. Alejandro confirmed it. New life bird for me. That brings me to 18 new life birds since I’ve been here so far this year!

We were joined on a few days at Cazalla, by our friend Eddie the Eagle. Edward is a retired gentleman from Britain, who spends a great deal of time watching birds. I had met him last year during my visit to Tarifa. Edward participated in many of our activities – songbird banding at La Janda, Black Kite banding, etc. He often brings drinks and snacks for the group, usually items that have local cultural significance that we may not have experienced. One day Edward brought us Caracoles, also known as snails. Only the best at Cazalla! 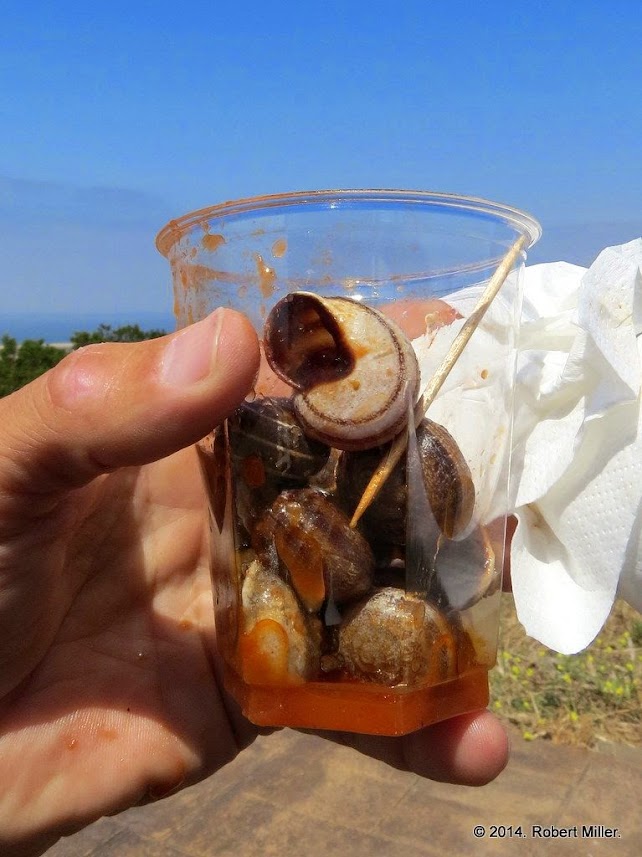 I had to block out my knowledge that the vast majority of parasites in the world spend part of their life inside snails. Edward assured me that these had been cooked very well. They were tasty.

Another official work task this week was banding Black Kites. This task is weather dependent as it is difficult to attract the kites if the conditions are favorable for migration. However, mid-week the wind shifted to the east (Levante Wind), and the kites stopped crossing to Africa. In these winds they risk being blown out into the Atlantic ocean to perish. When the Levante wind occurs the kites begin to gather in the field around Tarifa waiting for better conditions to continue migrating. The cage is located in these fields. The cage is baited with meat and bone scraps from a local butcher shop. The scavenger kites enter the cage and become trapped. It can take a while for the first to enter, but then more and more build up. We trapped 43 kites and had we left the cage open a bit longer, could have had many more. Unlike our normal trapping back home, these birds get a meal in the process. 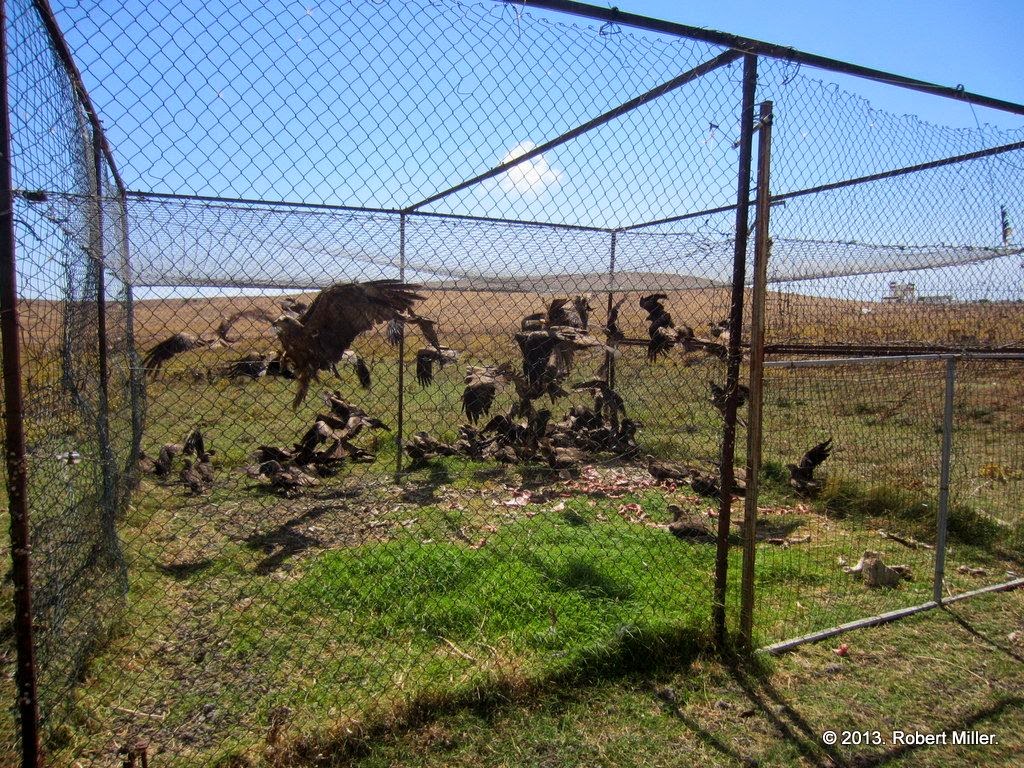 We quickly gather the birds, placing them in bags to restrain their wings and keep them calm. We quickly transported them into the shade in an old army machine gun turret, which is dark and cool. It is also home to a fantastic array of spiders and bats!

The Black Kite is a scavenger bird about 700 – 900 grams or about the size of our male goshawks in the states. They are very docile in the hand in comparison to any other raptor I am used to handling. 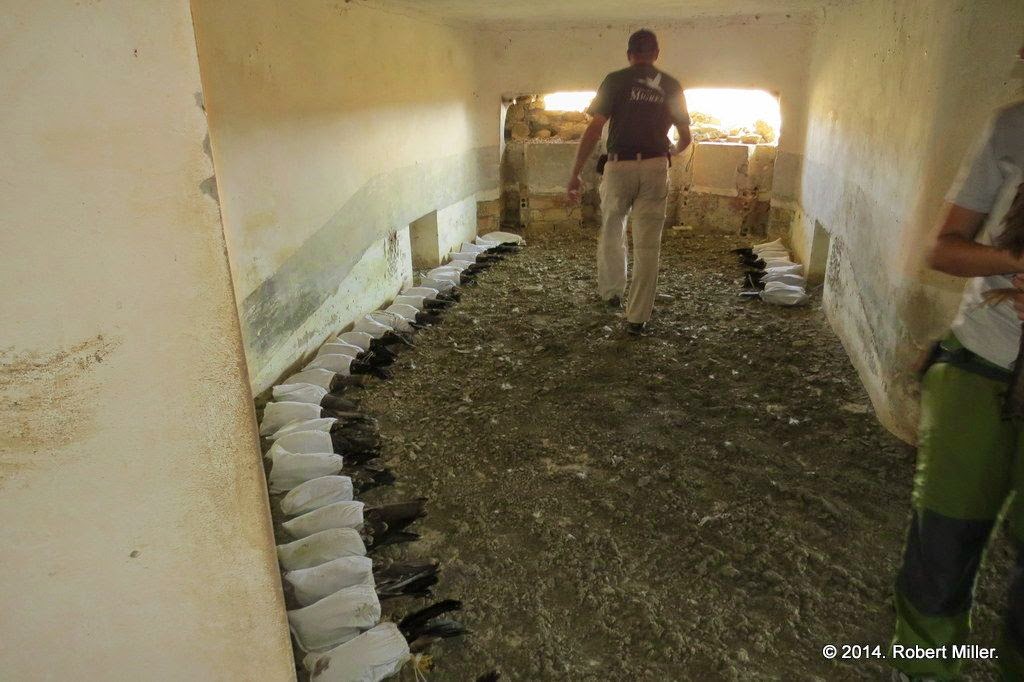 We set up an assembly line of weighing, banding, measuring, recording the molt patterns, and then releasing the birds. We traded off roles so we could each get experience with each of the tasks. The bands are different than we generally use in the US (size 7 steel butt-end bands, instead of aluminum lock-on bands) and the measurements are also different (e.g., wing flat instead of wing chord).

Since the kites spend a lot of time scavenging on the ground, their feathers can be in pretty rough shape. However, some have older retained feathers that look great. It varies a great deal from bird to bird. Most of the birds with the worst feathers were second-year birds which still had their juvenile feathers. This can be indicative of poor diet as a hatch-year bird – poor nutrition results in poor quality feathers. 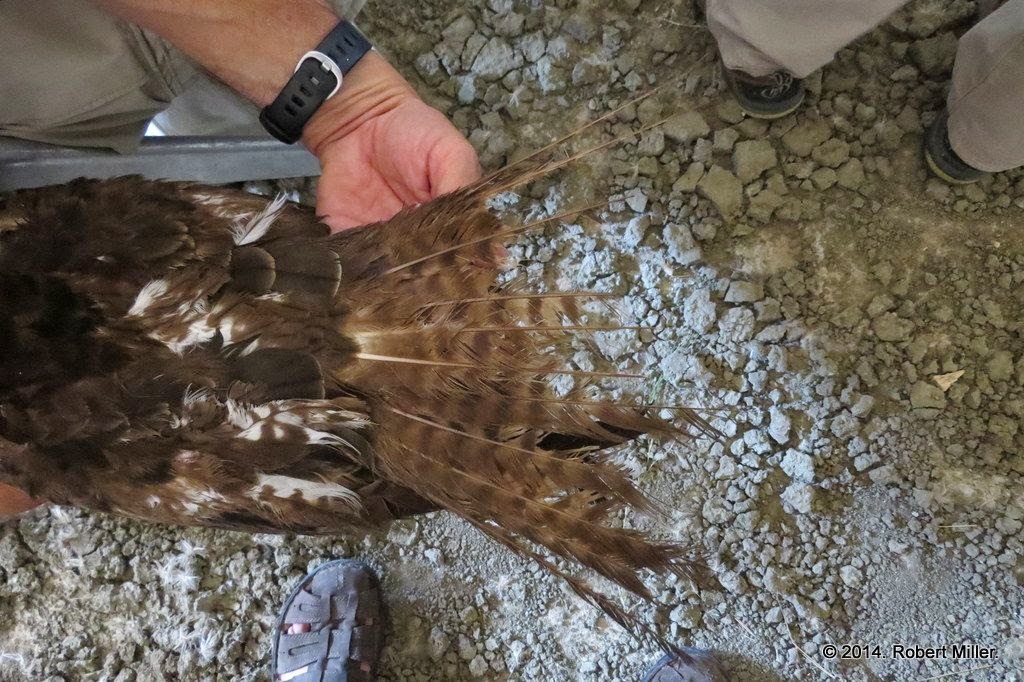 After work one day at Cazalla, Alejandro took use for a quick drive along the Mediterranean coast to Guadalmesi. Here we viewed a signal tower dating back to 1577. There used to be a network of these towers along the coast. The Migres group has occasionally used this site as an observatory to count birds arriving to Europe during the spring migration. 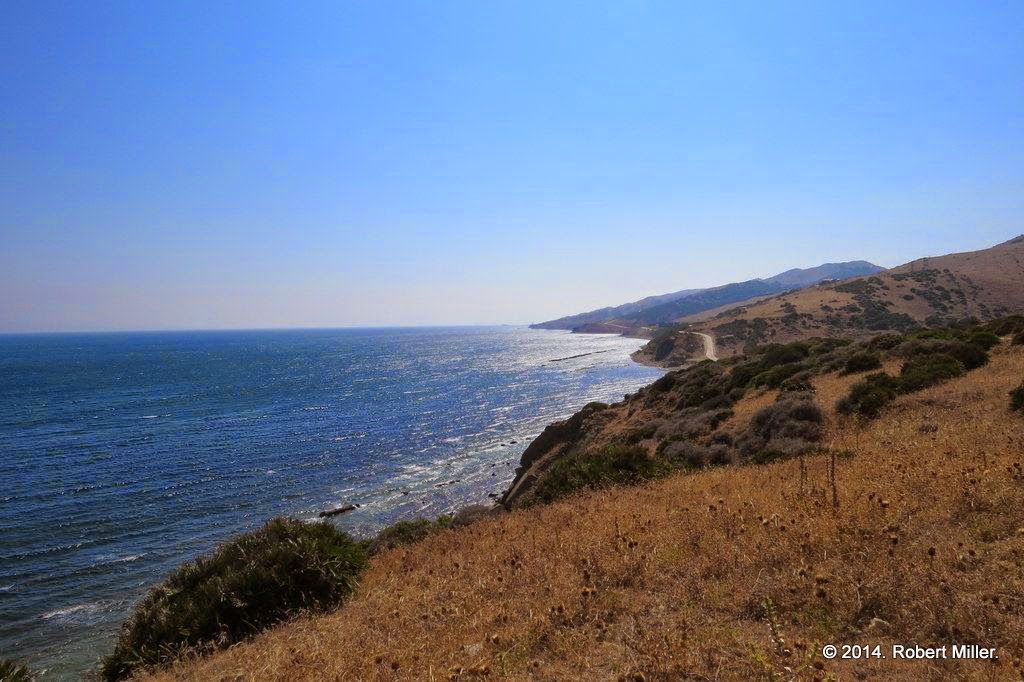 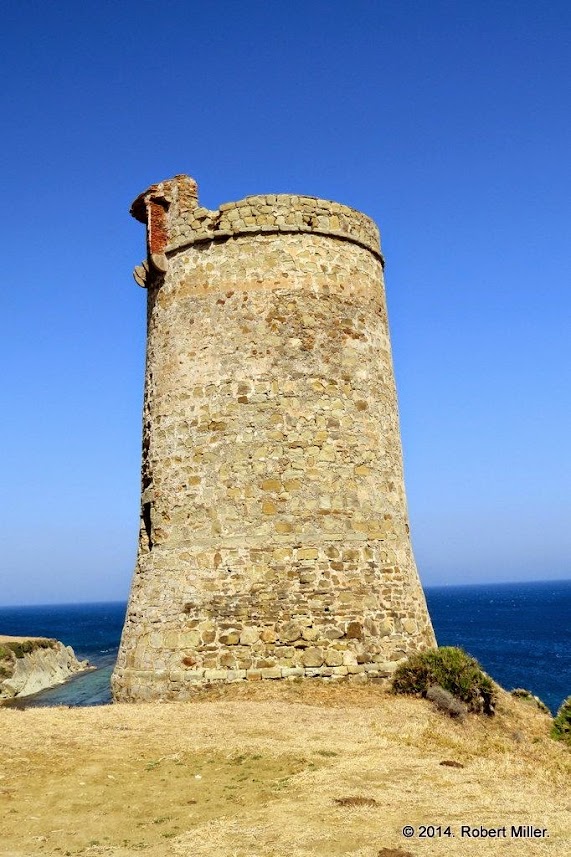 The big adventure for our weekend was to take the train to the mountain town of Ronda. This involved coordinating the local bus schedule with the train schedule, to spend as much time in Ronda as possible. In hindsight, we should have spent the night, but we did greatly enjoy our limited time there (5.5 hours in Ronda).

The highlight of Ronda is the bridge – the Puente Nuevo. The construction of the bridge began in 1751 and was completed in 1793. 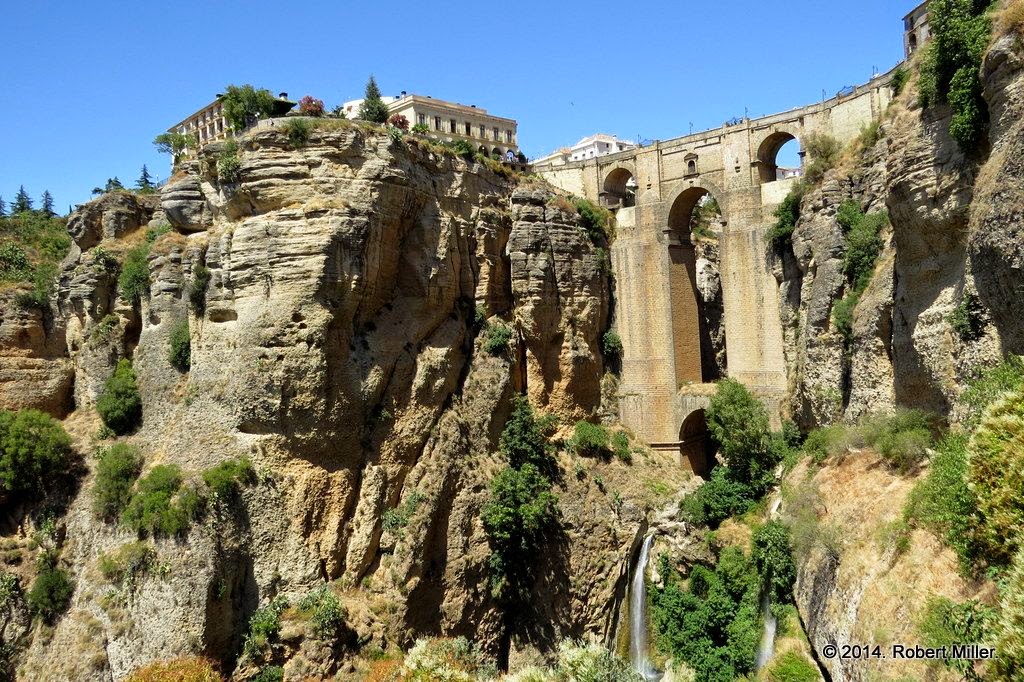 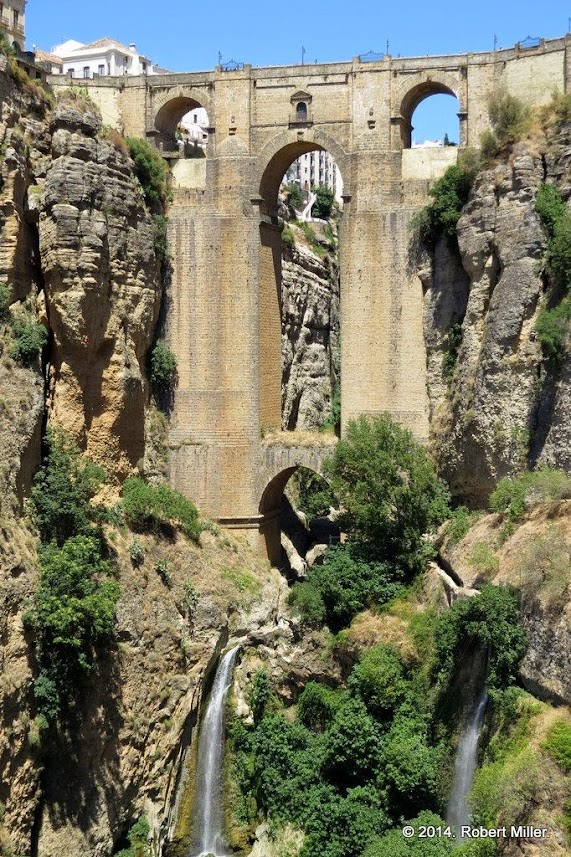 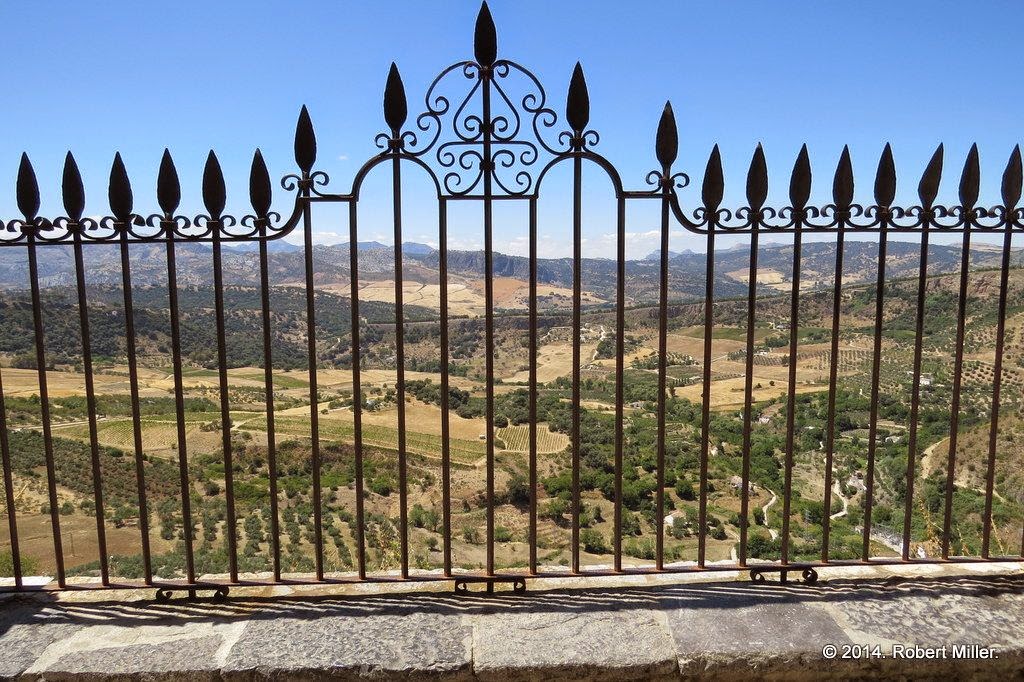 We spent a great deal of our time hiking around the bridge, but we also visited a couple of museums and one of the cathedrals – the Iglesia de Santa Maria la Mayor. 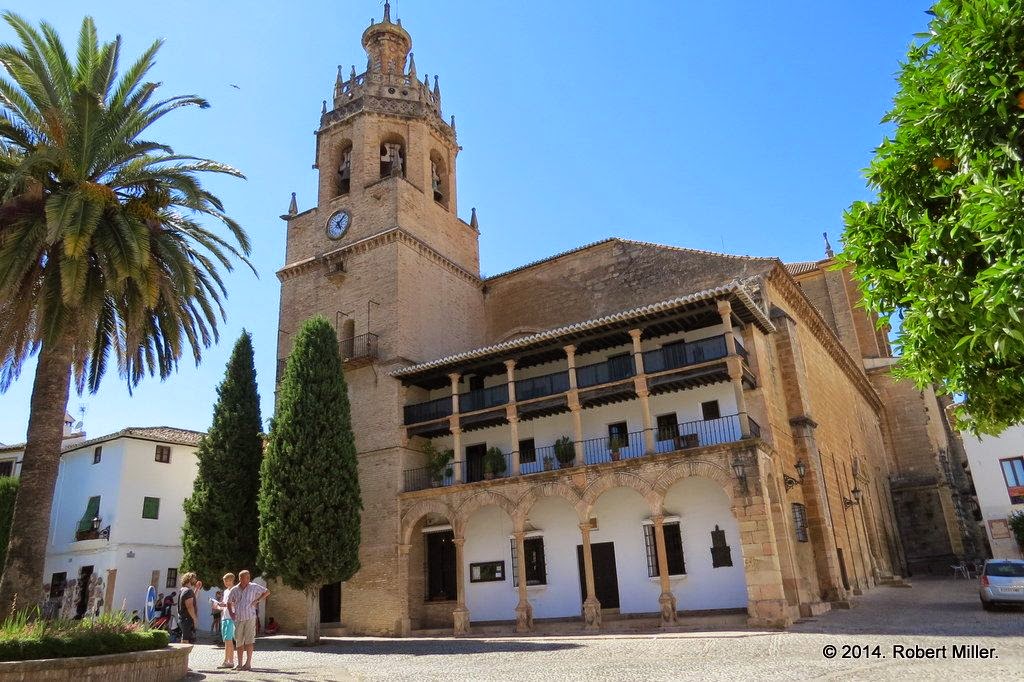 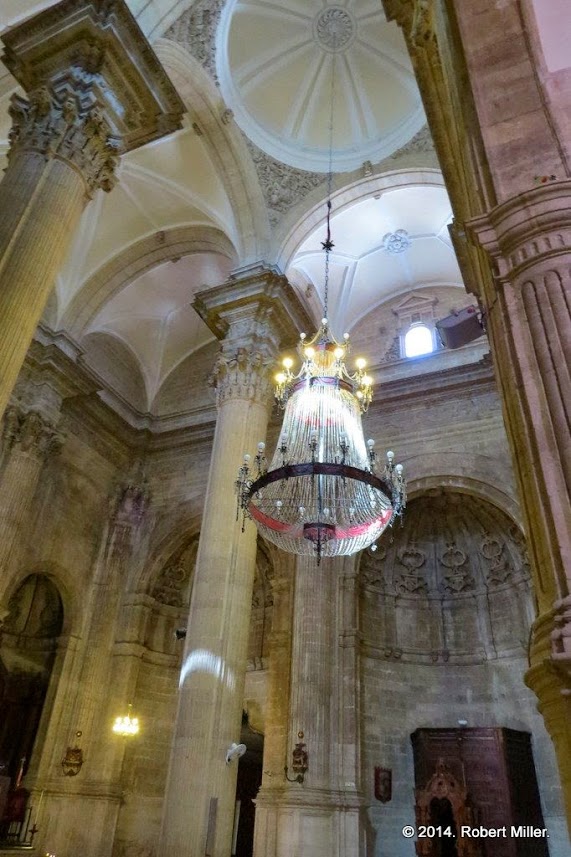 Ronda is a place of great cultural significance. It played a major role in the Spanish Inquisition and is the reported home of bull fighting.  We also enjoyed some great food, including a huge plate of crustaceans. How do you eat the little crabs? 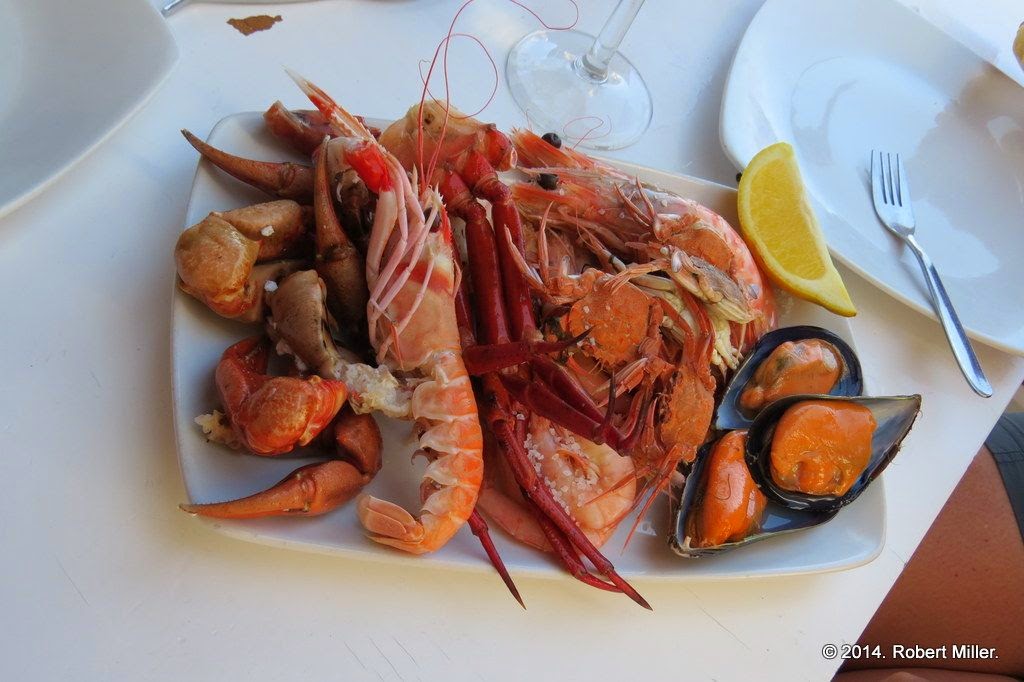 We finished our time in Ronda, caught the train back to Algeciris, and made the connection to the last bus of the day headed to Pelayo, with one minute to spare! It was a long, but great day.

On our final day off of the weekend, we again hiked to the Mediterranean Sea, but took an easier, although longer route. The beach was nicer as well. We hung out for a few hours before the long, steep hike back to Pelayo. 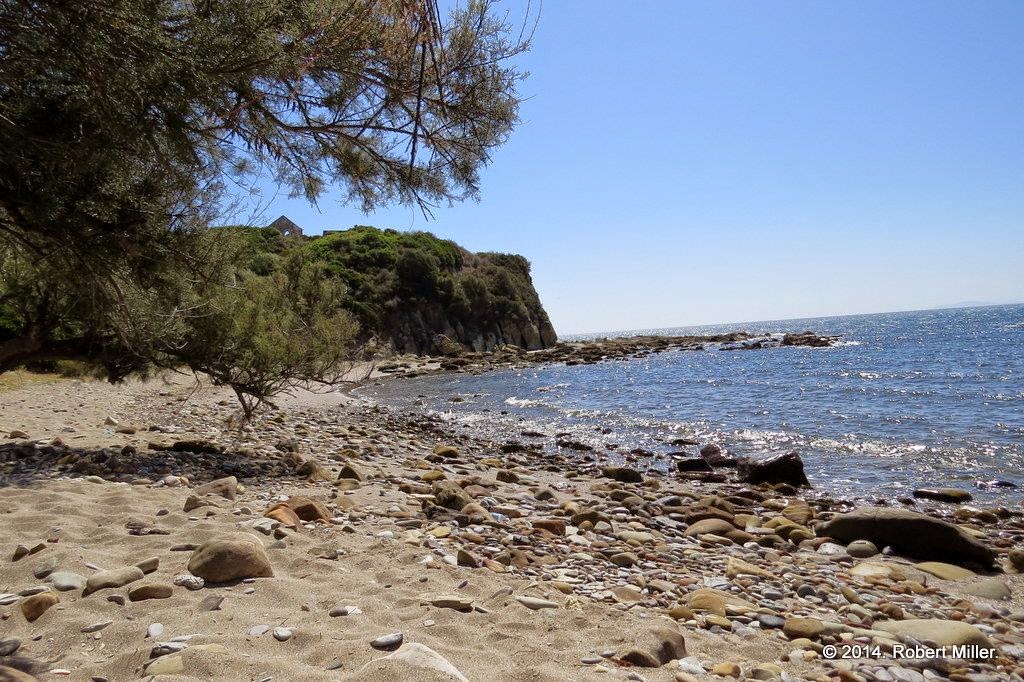 I have a short week this coming week as I am off Thursday and Friday, since I need to work next weekend. One day counting at Cazalla, two days in the office, and maybe more bird adventures mixed in. We might get some more raptor banding, songbird banding, and whale watching in this week. I’ll report back later!