Here’s the latest installment describing Karyn’s and my adventures living in Spain for two months studying the annual bird migration at the Strait of Gibraltar for the Intermountain Bird Observatory and the Migres Fundación. For more background, you may review my previous posts covering our first five days in Spain:

Our First Days Back in España

As the action packed first week (described in the previous blog posts) was coming to a close, it was time to get down to the serious business of counting the raptor migration, which is our primary job here in Spain. This early in the season, the Migres Fundación, who we are working for, only counts the migration at their primary count site, Cazalla near Tarifa. In mid-August, we will begin counting at another site further east closer to Algeceris, called Algorrobo. Each site has its own unique characteristics and species composition, with a great amount of overlap. 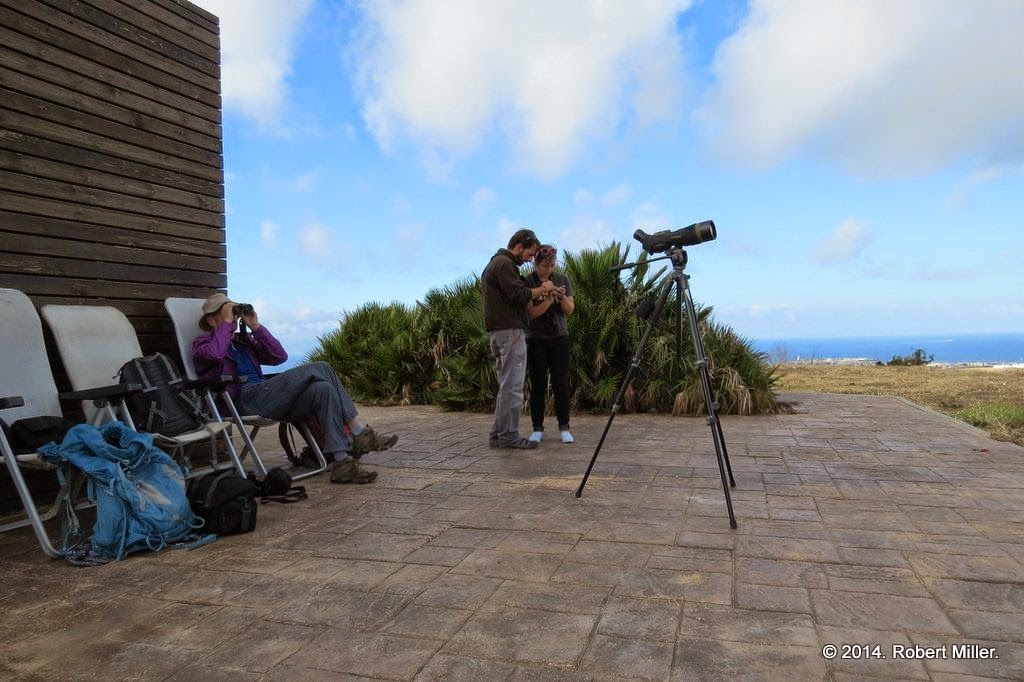 The Cazalla count site is the western-most site, just up the hill from the southern-most town in Europe, Tarifa. Most of the migrating birds from western Europe migrate down through Spain to this point before crossing the 14 km stretch into Africa (Strait of Gibraltar). Some birds can simply fly over the strait into Africa, but soaring birds like some raptors have more difficulty. Soaring birds often depend upon thermals and updrafts for lift and neither of these phenomena occur over water. Thus, what would be a trivial distance over land, can be a life-threatening journey over water. 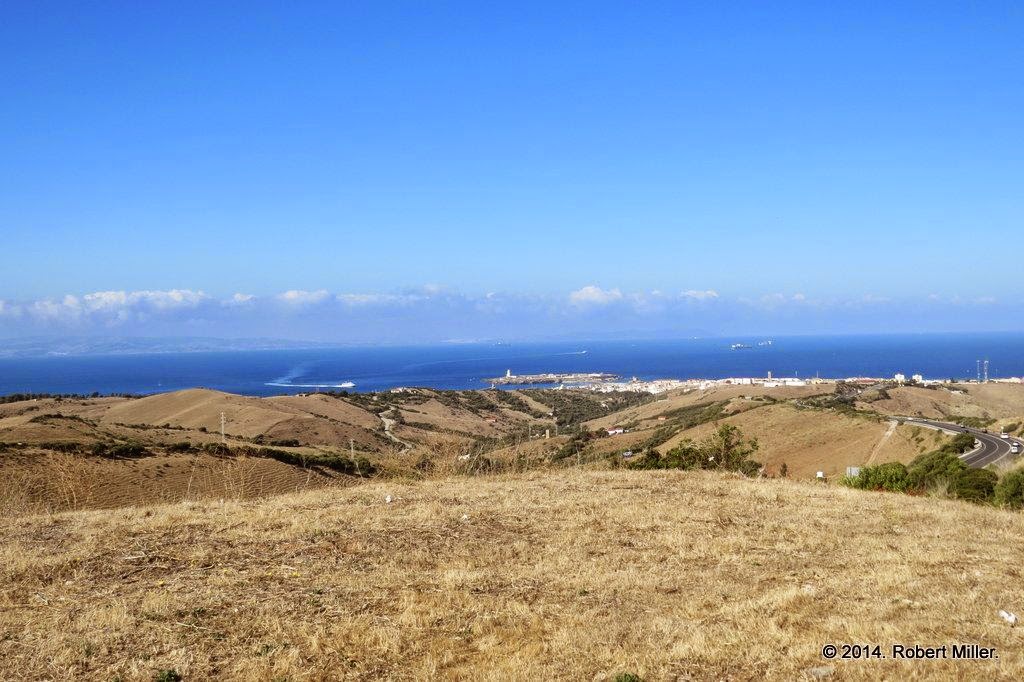 View down to the town of Tarifa from Cazalla, Africa is visible to the left.

The weather conditions and visibility play a very important role in the migration. With strong east winds (Levante winds) the birds risk being blow out into the Atlantic. If the winds are too strong from the west (Poniente winds), this can decrease the lift as birds try to cross, causing other challenges. If they cannot see Africa, they are less likely to risk the journey. Thus, bird numbers can build and build in the Tarifa area until the conditions are right for crossing.

One of the greatest spectacles of the migration, especially this early in the season is the migration of White Storks. On Sunday, we counted over 3000 migrating storks in individual flocks from 50 birds up to over 700 birds. We will ultimately see single flocks totaling more than 2000 or 3000 birds. It is awe-inspiring to see this mass of animal movement day after day. 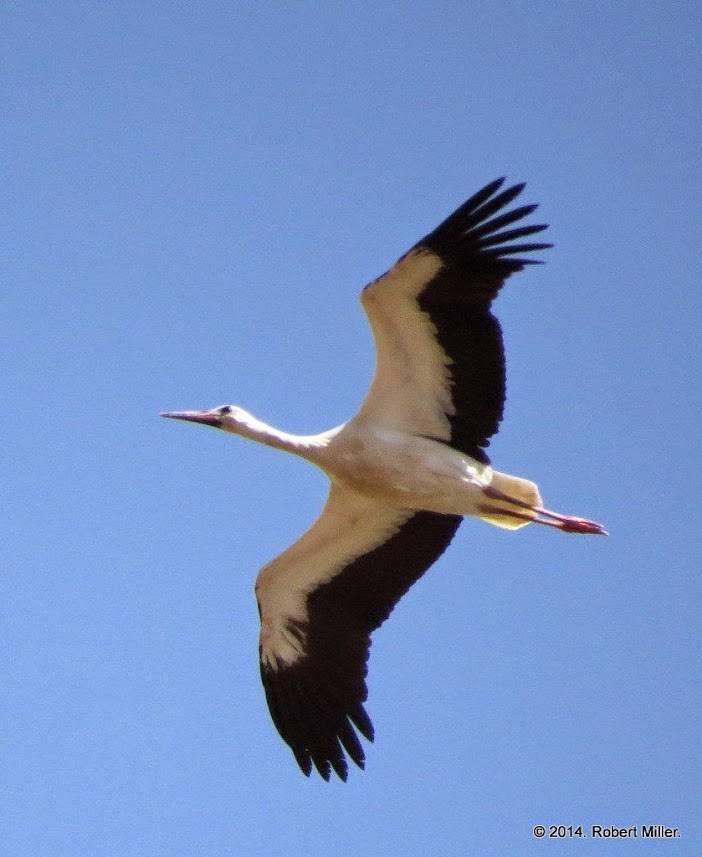 White Stork passing over Cazalla on the way to Africa. 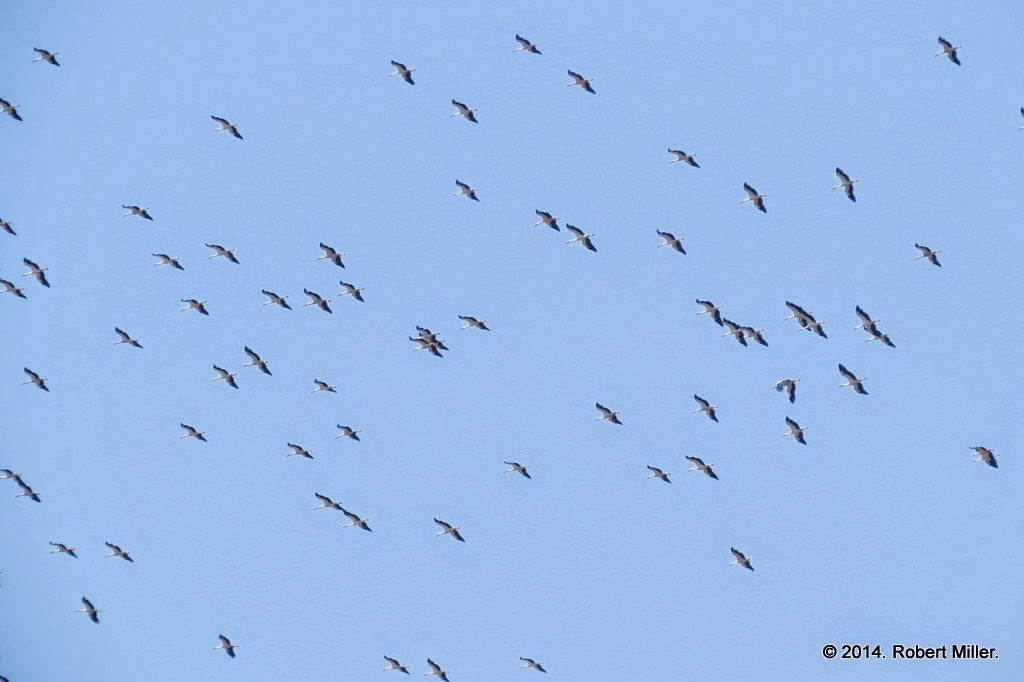 White Storks passing over Cazalla on the way to Africa.

There are many challenges in counting the migration. The massive landscape and various routes the birds take to approach the Strait requires vigilance in monitoring all of this space. Some birds migrate individually and some in large flocks. It still amazes me how easy it can be to miss a flock of 200 birds the size of White Storks. Some birds are local and just use the landscape for hunting, these should not be counted every time they pass by. Wind and weather patterns change the behavior of certain species. These patterns can change minute to minute. Maintaining focus for eight hours can also be challenging. Then there are the species. The White Storks may be easy to identify, but a single soaring raptor, flying a couple of miles away can be a different story. We use a mixture of shape, flight style, and behavior to identify the birds. We rely less on color than you might expect as the lighting can dramatically alter your perception of color, especially at a distance. Put all of this together and it makes for a very difficult but exciting job. 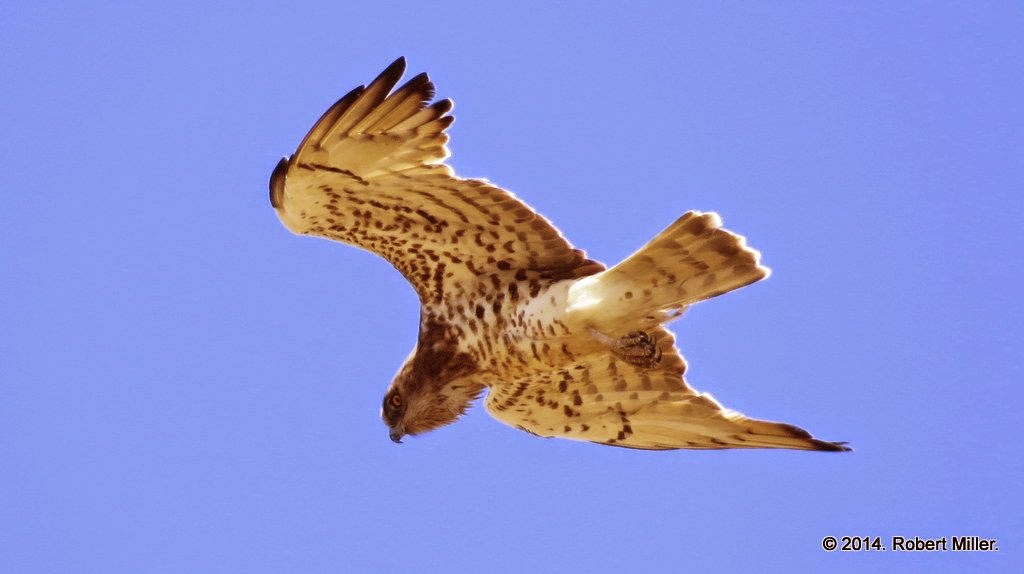 We will spend most of our time over the coming months counting birds on this migration.

Another great migration which occurs at the Strait of Gibraltar is the tuna migration. Whenever large quantities of wildlife occur in one place, there is sure to be even more wildlife in the form of predators. Hence, whale watching and specifically Orca watching is a big deal. On Sunday we joined Alejandro on a whale watching tour in search of these predators.

On the boat ride out, we were lucky enough to see a Fin Whale, the second largest animal on earth (Blue Whale would be the largest). We also came across a pod of Striped Dolphin. In the end, the Orca would elude us. We expect to try again in the coming weeks. 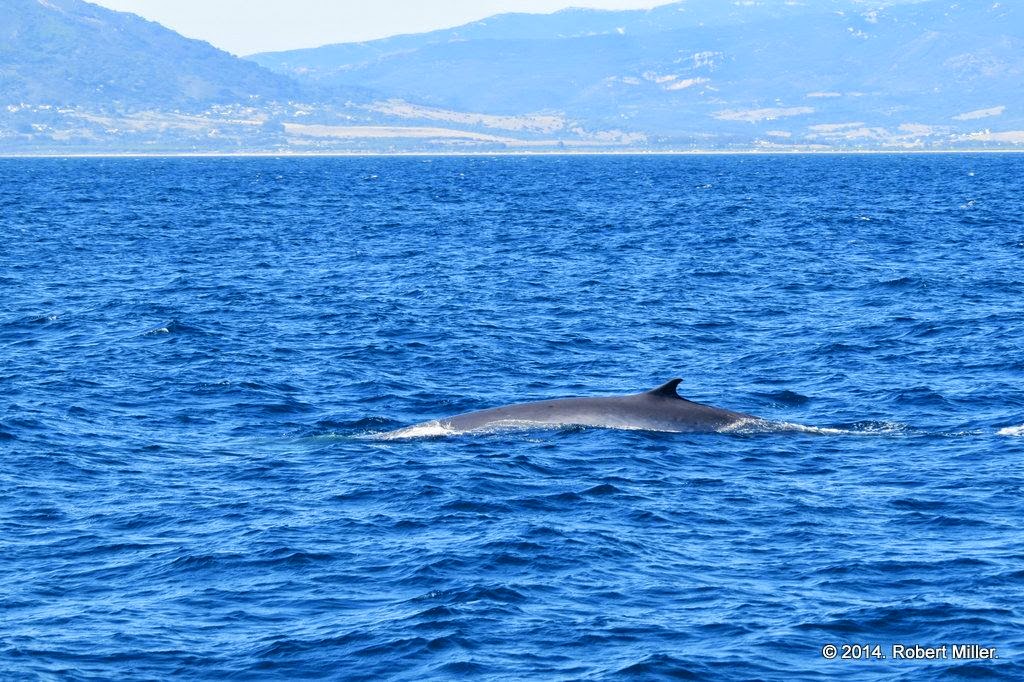 It can be difficult to take good photos on a rocking boat.

On Tuesday, we set out to meet some formal obligations the Migres organization has with regards to marking some individual birds as well as some general banding operations that they perform. The first obligation was to color band some Montegu’s Harriers, one adult and one nestling that was too young for the team to band last week. To trap the adults we used a Eagle Owl as a lure near a mist-net. This process was very similar to how I trap adult goshawks in the states. 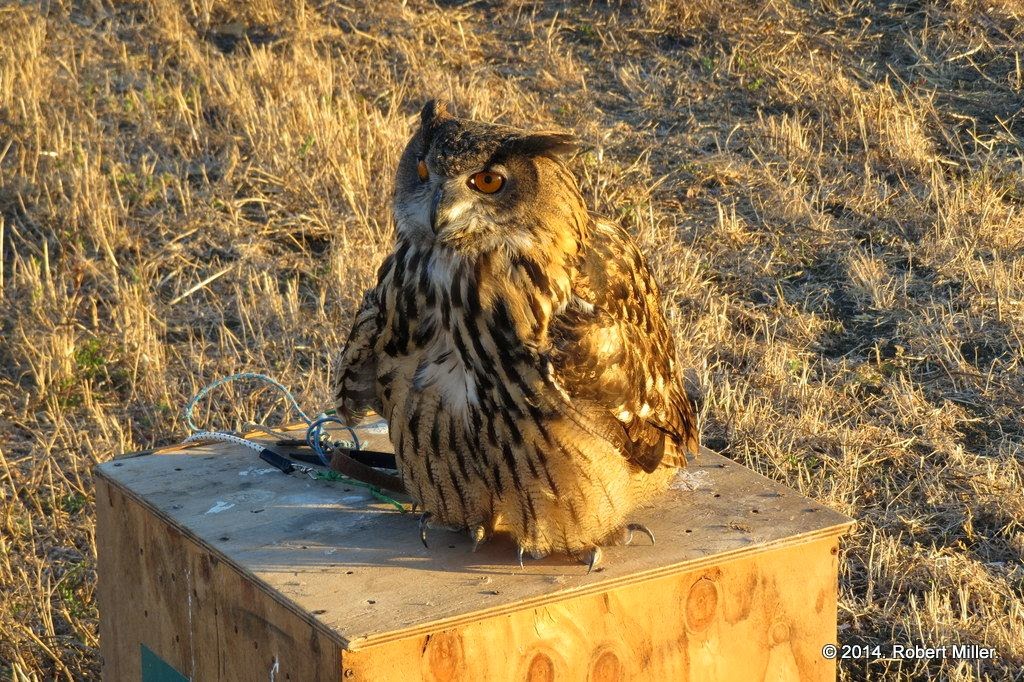 In less than a minute we had trapped the adult male harrier. He appears to be a “Third-year” bird indicating that he was hatched two years ago. This is probably his first breeding attempt. 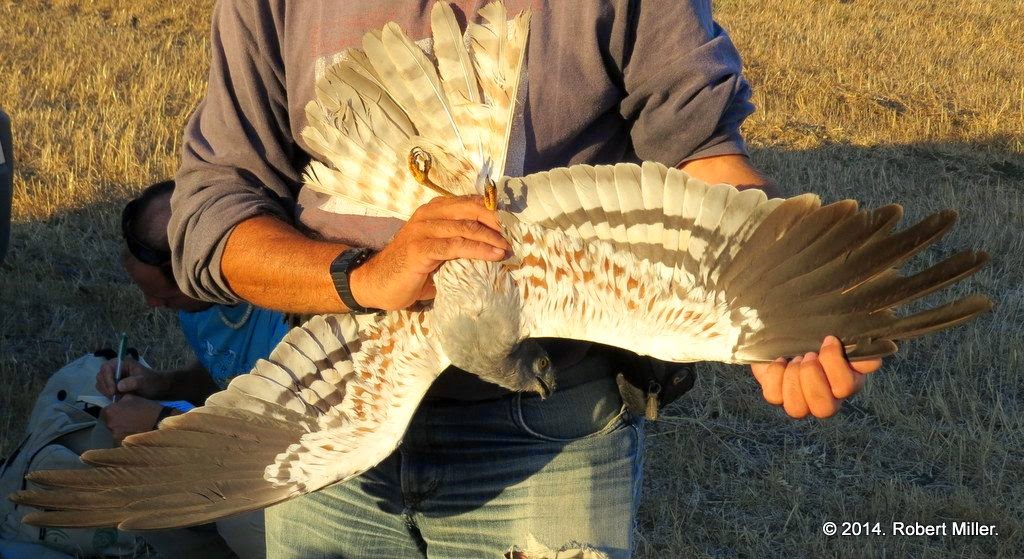 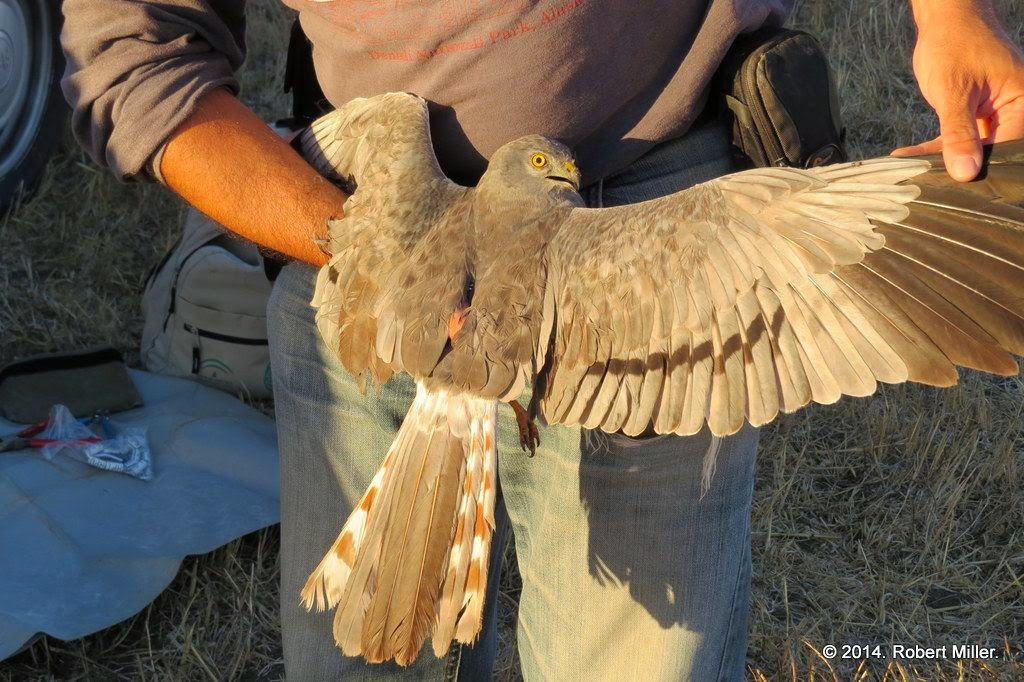 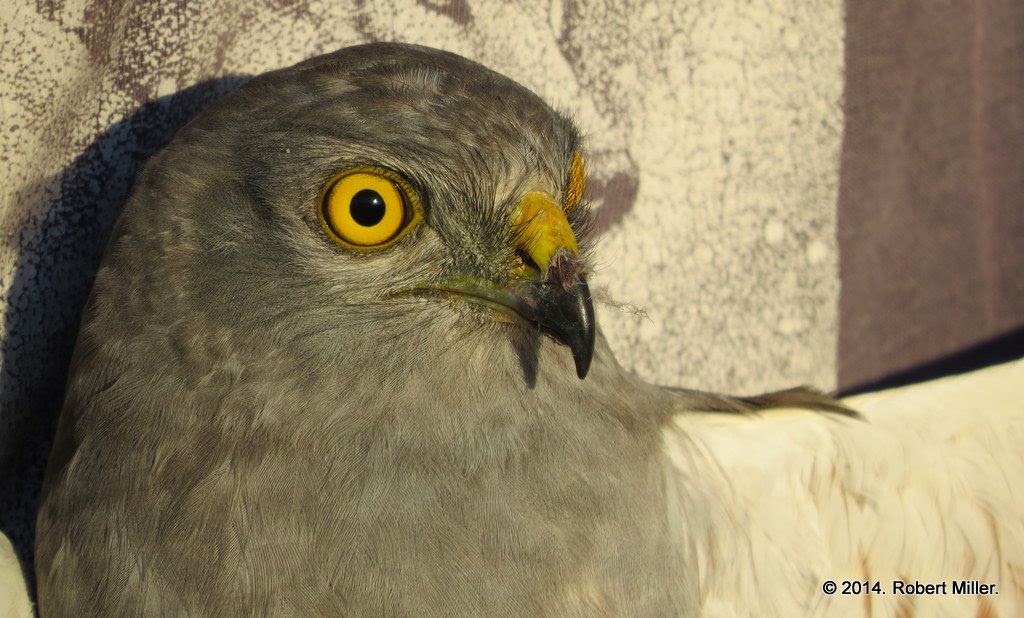 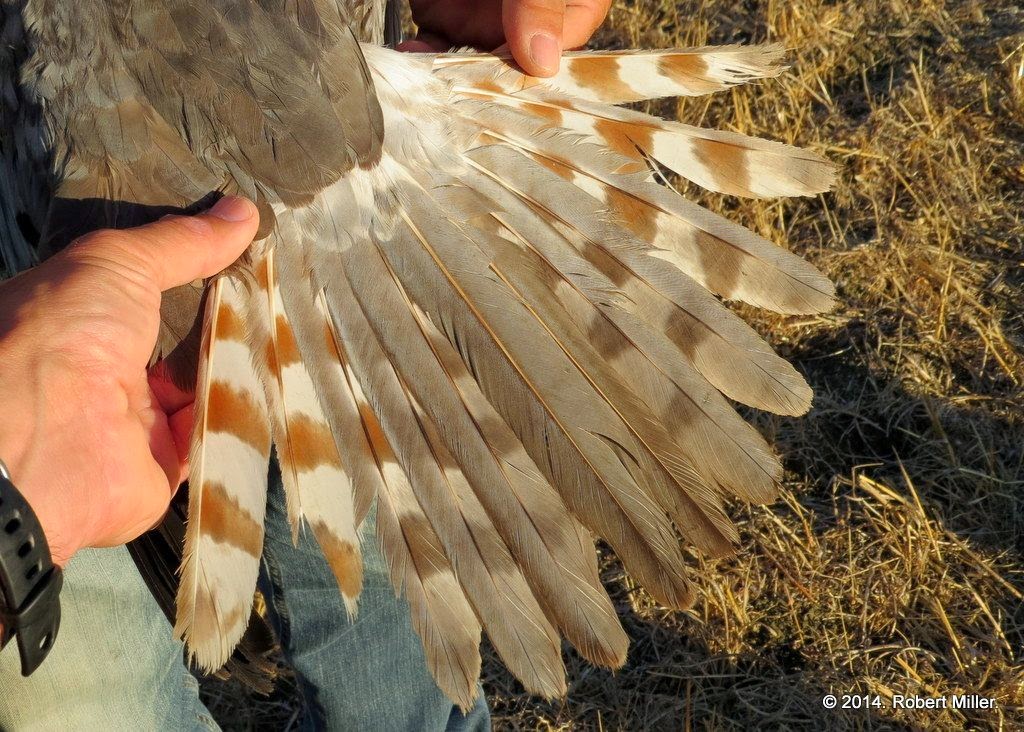 The female was much more weary and would not come in after the male was trapped. After waiting for close to an hour, we gave up and moved in to band the nestling. Two of the nestlings were banded last week, but one was too young at the time. Carlos captured the third nestling and we applied the band and color band. 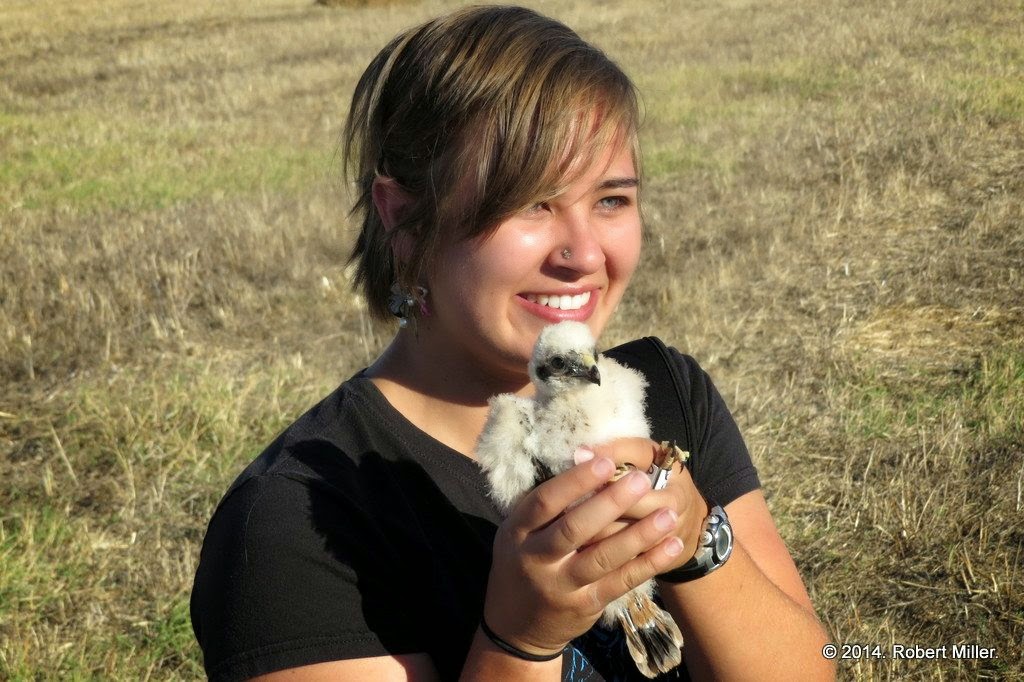 After we were finished with the harriers, we moved toward Punta Bolonia to try and capture a Rufous Bush Robin. The Migres team has applied geo-locators to a handful of Bush Robins last year and were hoping to apply more this year. We did capture what we think was a Spanish Sparrow (females are very difficult to identify conclusively) and a Nightingale, but the Bush Robin was not to be found. We once again decided to move on.

Third on the agenda for banding for the day was trapping Black Kites. This involved baiting a trap with old meat and bones obtained from a meat market. It takes a while for the bait to be discovered, but usually once one bird find it, more and more follow. The best days to trap are those days when the wind is not favorable for migration to Africa.  As the Levante winds continue day after day, more and more kites arrive in the area but are unwilling to cross to Africa. The kites occupy the fields in the area around the trap. This growing density of birds increases the chances that the trap will be discovered. Today wasn’t the best day to trap as it was only the first day of a mild Levante wind. We were unsuccessful in attracting kites. We will check the trap again tomorrow.

A Day of Mixed Projects and a Kingfisher!

As you may have figured out the Migres organization is involved in many projects. We will not participate in all of them, but the list of projects we do participate in continues to grow. On Wednesday, we started our day counting birds on the Los Lances beach. This project involves a survey of the beach, noting the number and species of birds using the beach, along with the level of disturbance. It was a beautiful day for a walk on the beach, and I noted at least four new life birds! We even found a family of Kentish Plover chicks.

I particularly liked this sign. It indicates that the area in front of the sign must be the zone of no sensible!

However, the most non-sensible task was indeed occurring behind the sign. People should take care to not disturb wildlife or habitat, but the local government can drive trucks on the beach, transporting tons of sand weekly, that just gets blown back to where they pick it up. Yes, governments apparently do crazy things everywhere. 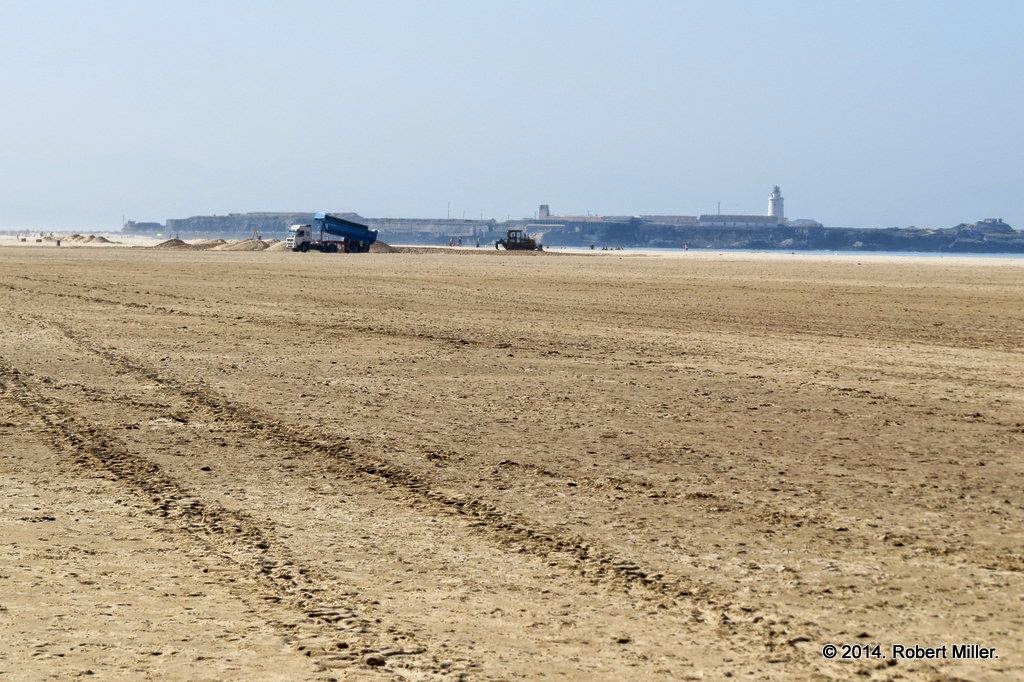 After a few hours on the beach it was time to go check Osprey nests. The Osprey is under much greater threat in southern Spain than in Idaho. The Migres Fundación works on a number of population promotion projects including re-introduction of the Osprey to local areas. Our job was to check the status of the nests to see if they have successful fledged young. Of the two nests we checked, both were successful this year fledging three and two young respectively. While the nestlings in the photo have not yet left the nest, they have reached an age to which they are considered successful, usually 80% of the average fledging age. 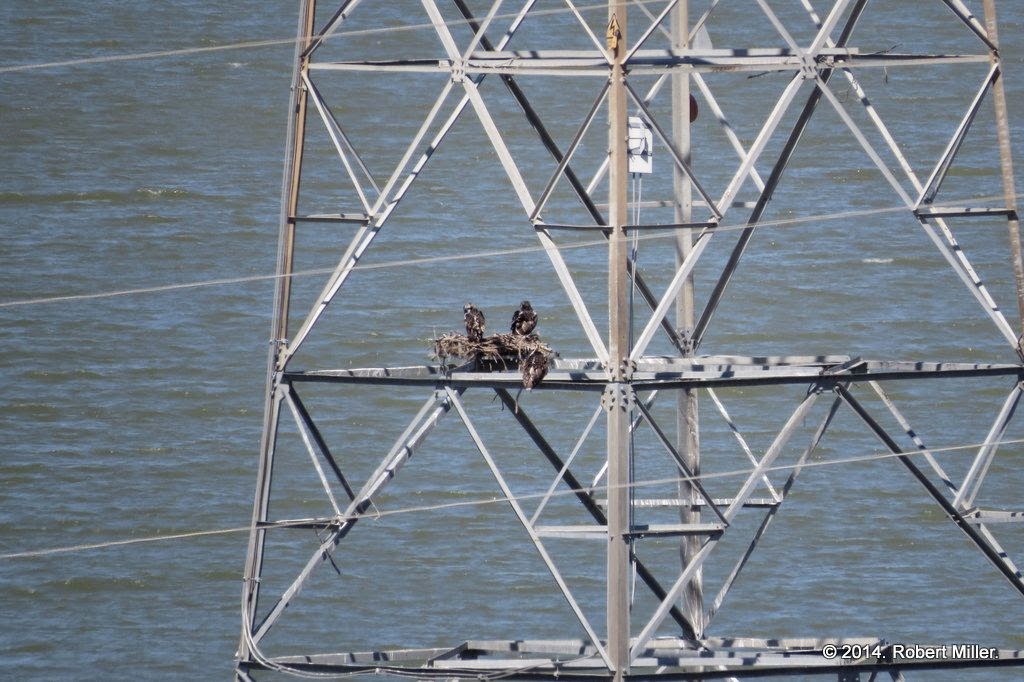 While in the area, why not check on the nests of another rare bird, the White-rumped Swift. 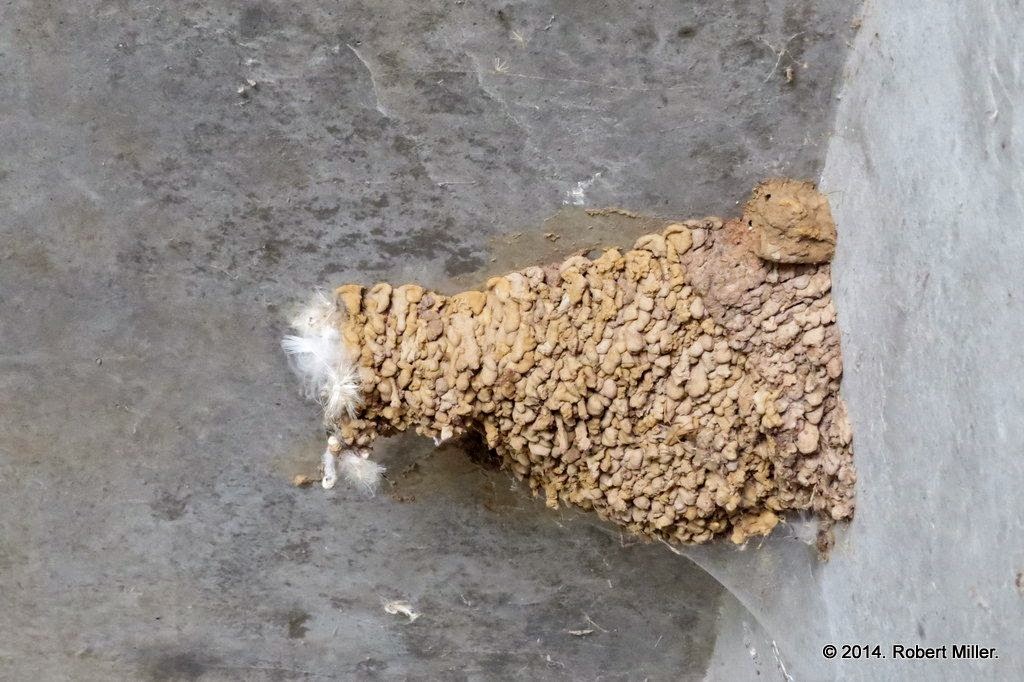 But the biggest task of the day was songbird banding at La Janda. We left Tarifa at 6pm to drive to La Janda, set up the songbird nets, and band birds until midnight. The primary focus of the activity is to band Barn Swallows migrating to Africa, but many other birds are captured and banded as well.

We set up two mist-nets, one for Barn Swallows and one for Bee-eaters. On our first “net run”, we realized we were catching too many birds to keep up, so we had to close the bee-eater net. Within 5 minutes of closing the bee-eater net, a flock of bee-eaters flew over! We were so close! 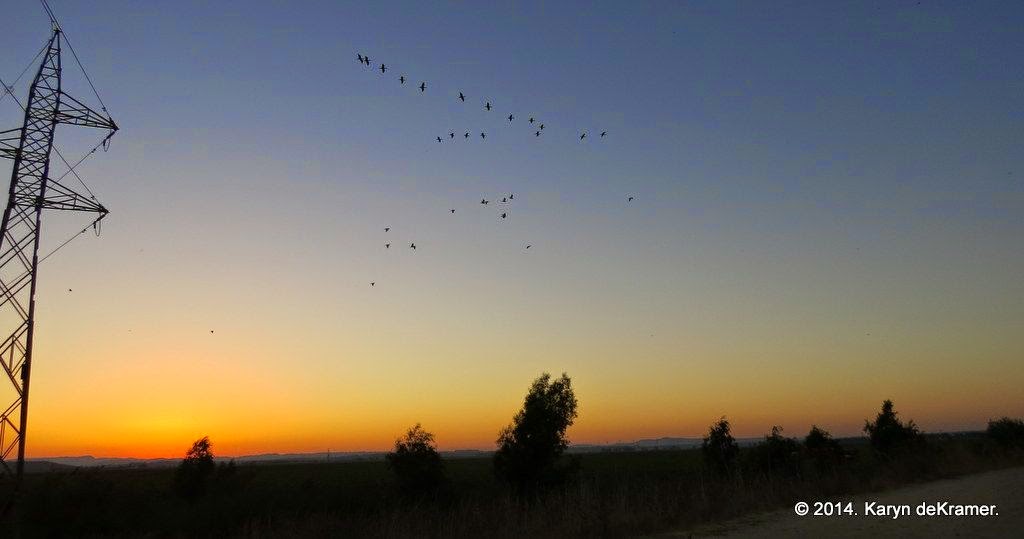 We set up the processing station in an assembly line fashion. Emmy and I, banded birds, Alejandro measured birds, and Raquel recorded the data. It took a hour to process the first batch of birds. 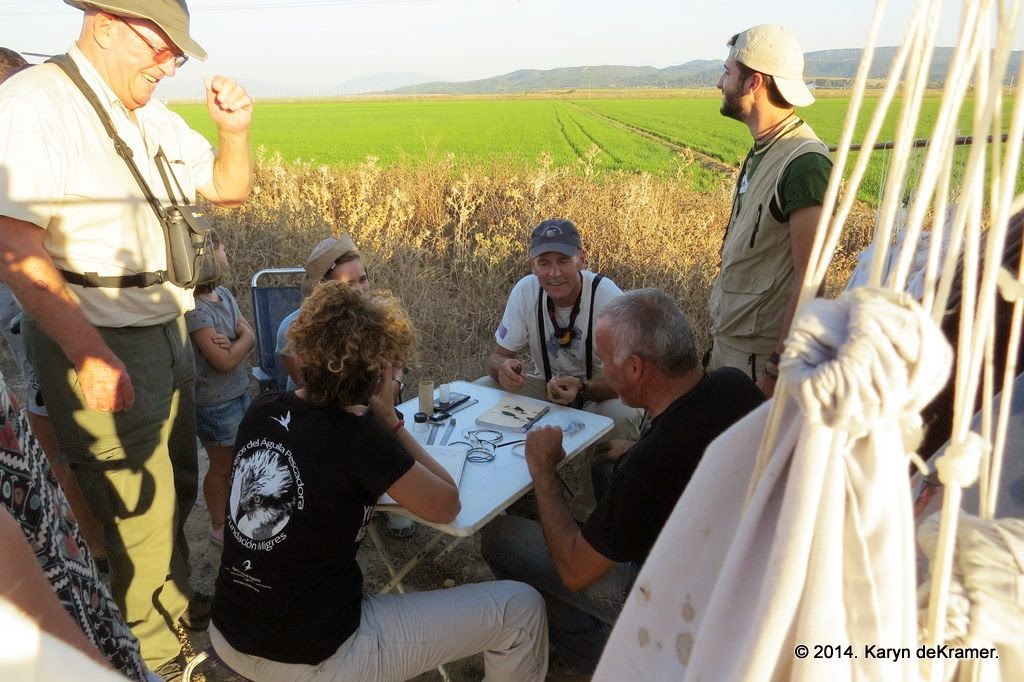 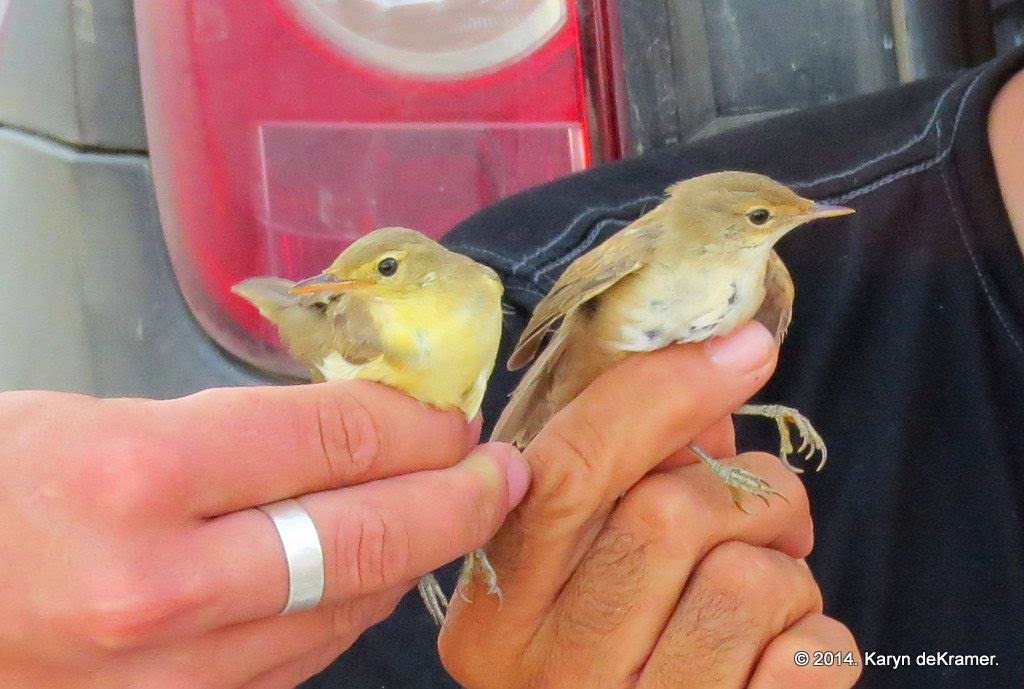 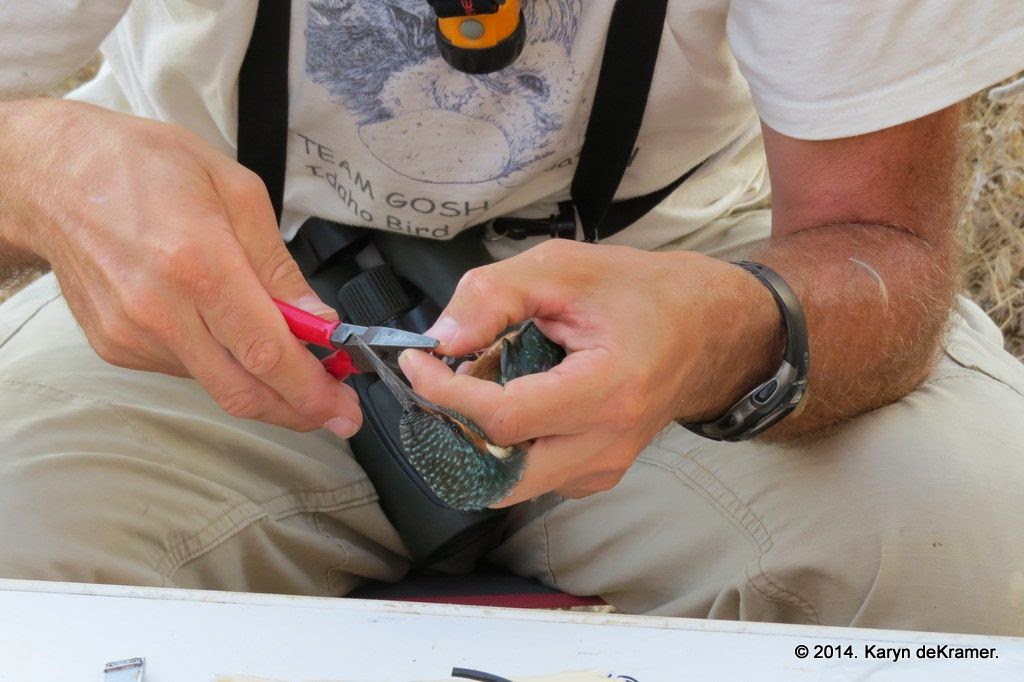 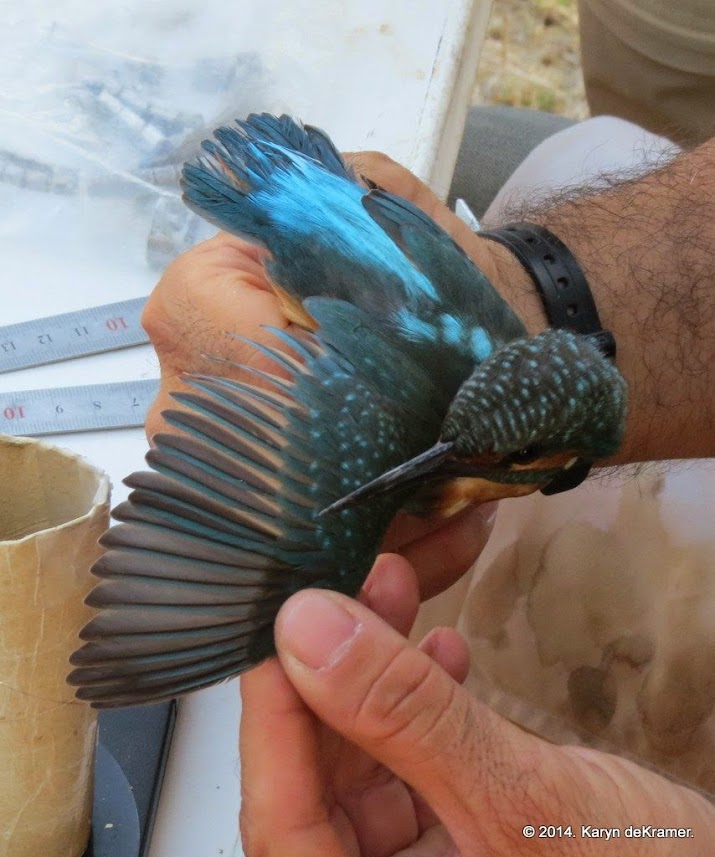 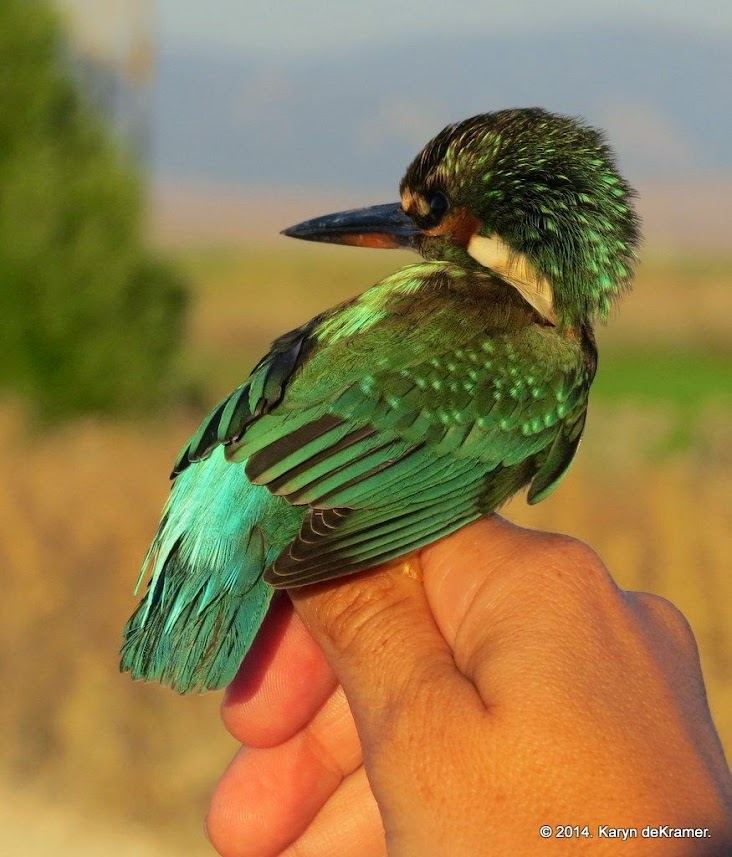 In two net runs we collected and processed just over 100 birds. We finished up and returned to our apartment around 1am. Not much sleep before heading out to count the migration the next day.

It’s Not All About Birds

Often times when working in the wildlife profession, we are presented with opportunities to work with animals other than birds. Someone had found this chameleon in a highly populated area near the beach with lots of people and vehicle traffic. We were asked to transport it to a nearby natural area where it would have a much higher chance of survival. It was an amazing creature, the first I had ever seen. 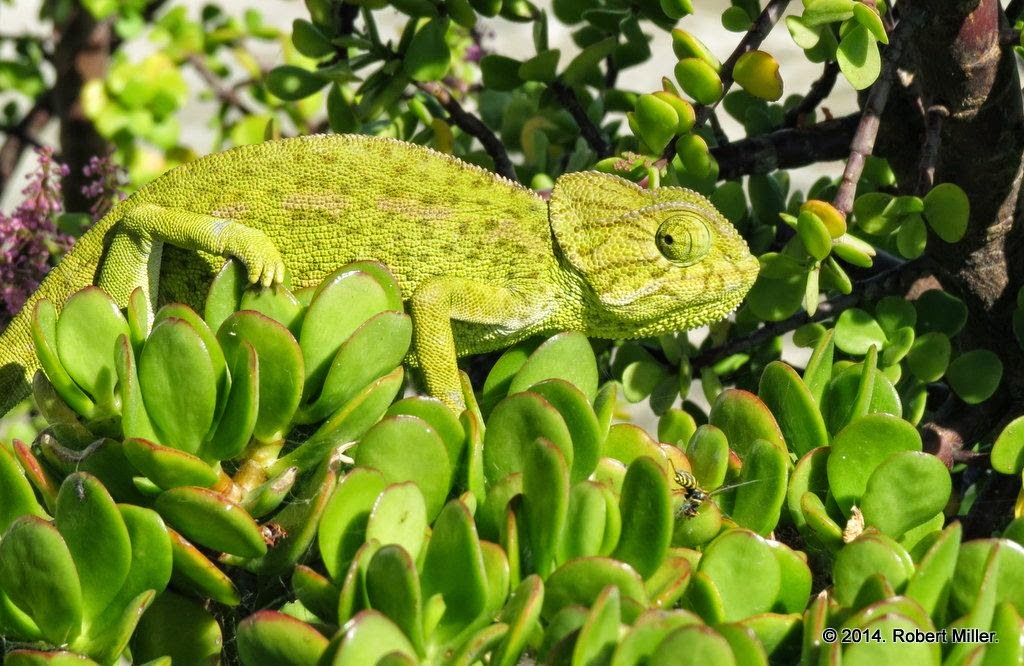 Mixed in with all of the work day after day are brief occasions for fun and games, and Alejandro is sure to take part. 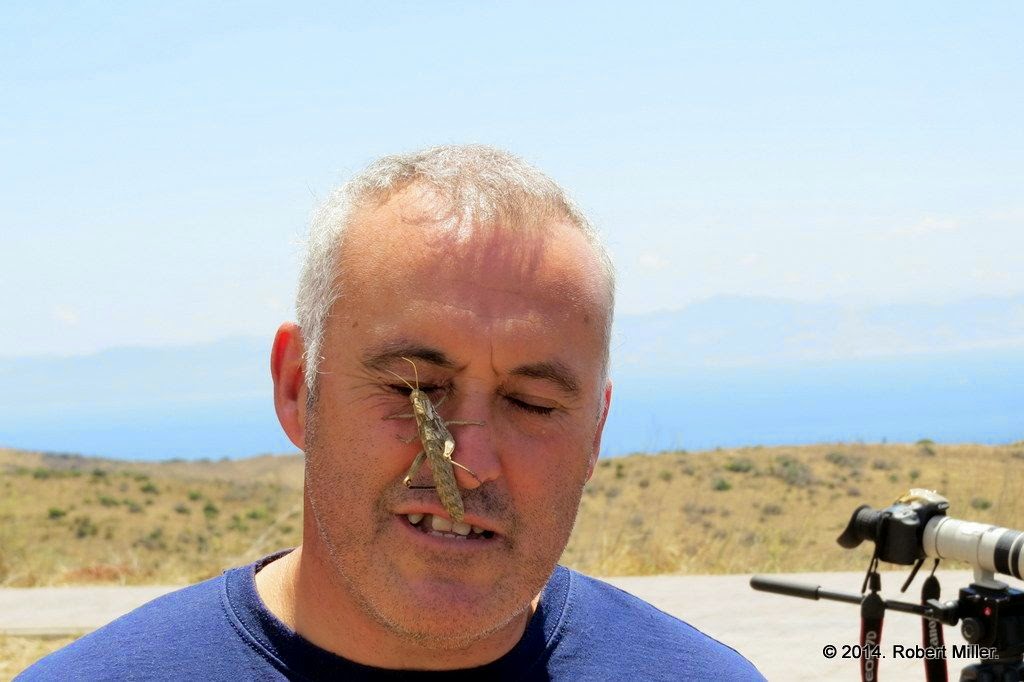 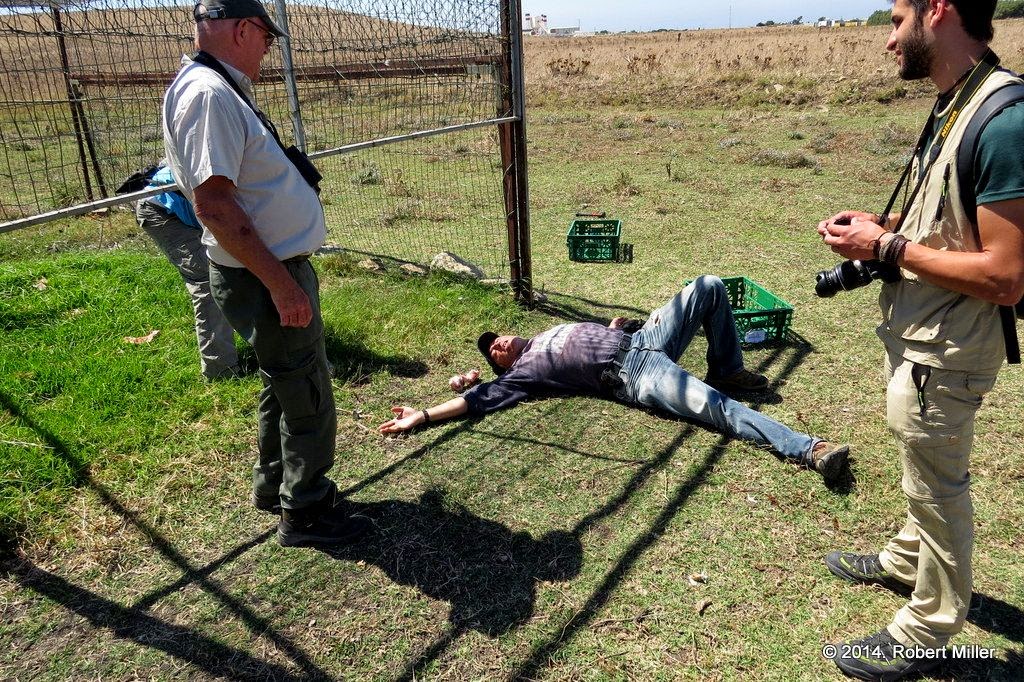 Alejandro illustrating how to play dead to attract kites and vultures.

Next on the Agenda

Emmy and I are now fully integrated with the team and have been given our work schedule for the rest of the time here. Karyn will participate in most of our activities also, but as a volunteer, she is not formally committed to the work schedule (she can play when she wants!). I will spend two days a week working in the office on a joint research manuscript analyzing the impact of local and regional weather conditions on the migration here at the Strait. I will spend my other three work days a week counting the migration at Cazalla and Algorobbo. There will still be other special projects to work in as well (Seabird migration, beach monitoring, swallow banding, etc), but our work schedules are expected to settle down a little.