Our First Days back in España

I have the honor and good fortune to once again be selected by the Intermountain Bird Observatory to represent them in Spain as part of a joint research collaboration between IBO and Migres Fundación, which has been going on for a number of years. Last year I travelled to Tarifa, Spain for two weeks as part of this collaboration (last year’s blog posts: Migration on an Unimaginable Scale, Into the Cage–Banding Milano Negro in Spain, Studying the Smaller Avifauna of Tarifa, and The Non-avian Fauna of Tarifa). This year, I will spend two months here, and Karyn got to come as well! Sharing our apartment with us, and also representing Boise State University and the Intermountain Bird Observatory, is Emmy, my goshawk field assistant from 2012. 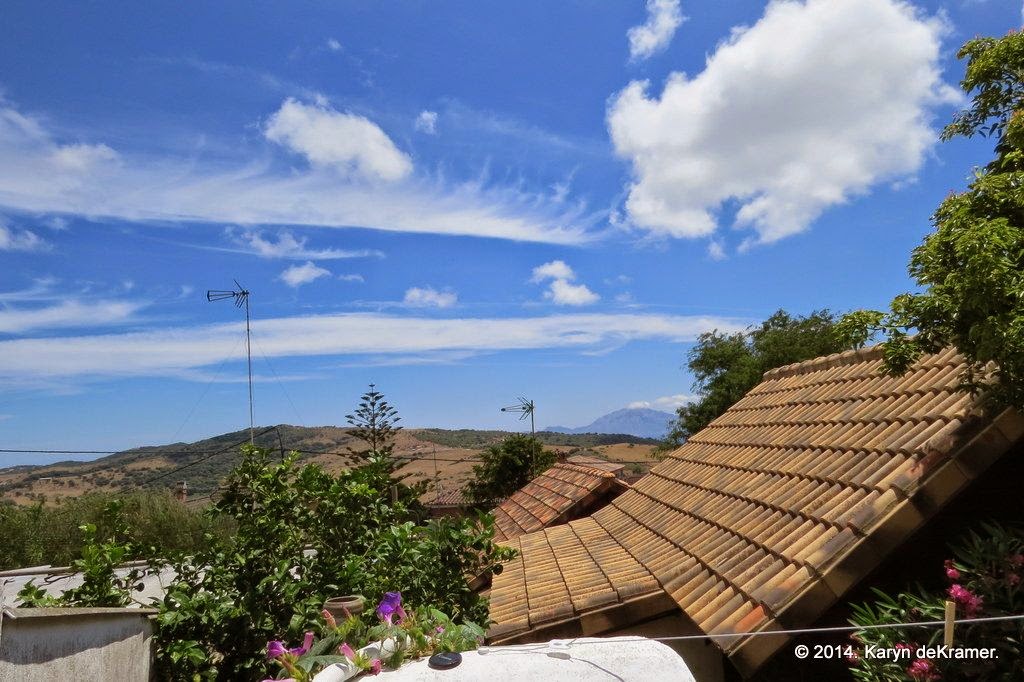 View of Africa (center in the distance being touch be the cloud) from the deck of our apartment in Spain!

We will spend a lot of our time here in the field studying birds and counting migrating raptors, but I am also working on a collaborative project using the data collected here in Tarifa. My analysis will use aspects and approaches which I have used in the two weather/climate change publications I have completed for the Intermountain Bird Observatory (My Publications).

The early portion of our trip was quite a whirlwind. We spent over 20 hours getting to Malaga, Spain by air, followed by a two hour car ride to Pelayo to check into our apartment. We were quickly swept into a three hour training course on the identification and counting of migrating raptors here at the Strait of Gibraltar. The training was excellent and kept us engaged enough to stay awake (mostly…).

We awoke our first morning ready to count thousands of raptors from western Europe making their way down through Spain to cross the 14 km (10 mile) stretch of water known as Estrecho de Gibraltar (Strait of Gibraltar) to Africa. However, the wind had a different plan. The wind was from the east and very strong (Beaufort 7 or approximately 31-38 mph). For most species if they tried to cross in these winds, they would end up far into the Atlantic. In other words, they would drown. The count was cancelled for the day, but the fun was not.

Our gracious host Alejandro took the three of us and two other Migres collaborators on a tour. We visited the count site to feel what a Biento de Levante (name of the strong east wind) feels like. It was indeed difficult to stand up and there were no birds to be seen. It was a wise choice to cancel the count for the day. We stopped by the visitors center to see an amiga of mine, Nieves (I didn’t forget!). We then traveled north to Punta Bolonia (Point Bolonia) to visit a Roman ruin – Baelo Claudia. This area was a major source of tuna for the Roman Empire along with Garum, a fermented sauce made from the blood of the tuna. 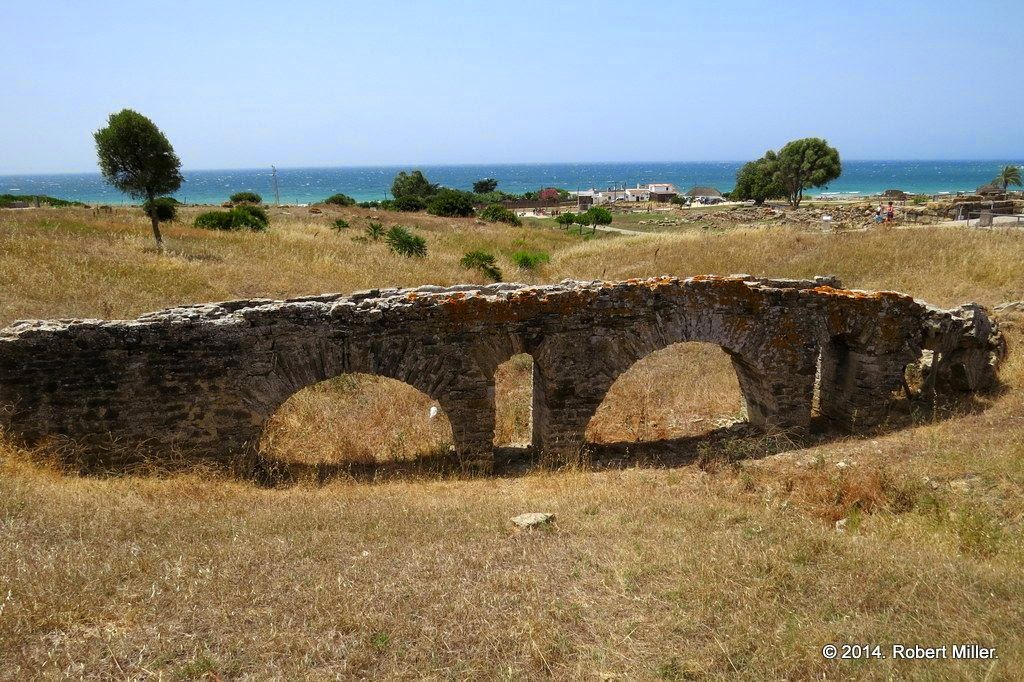 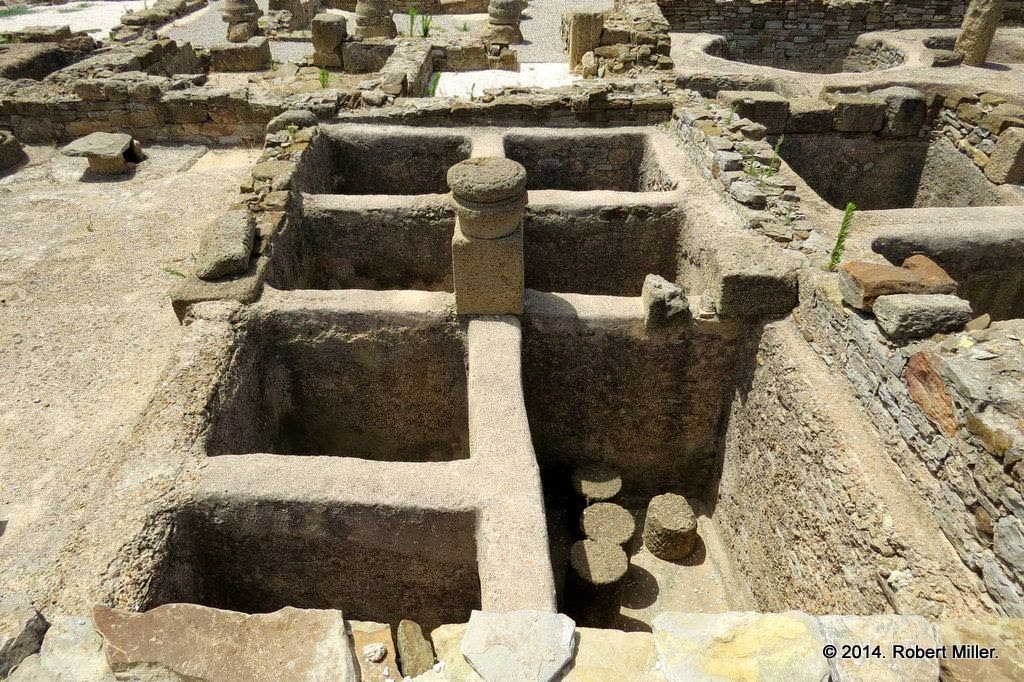 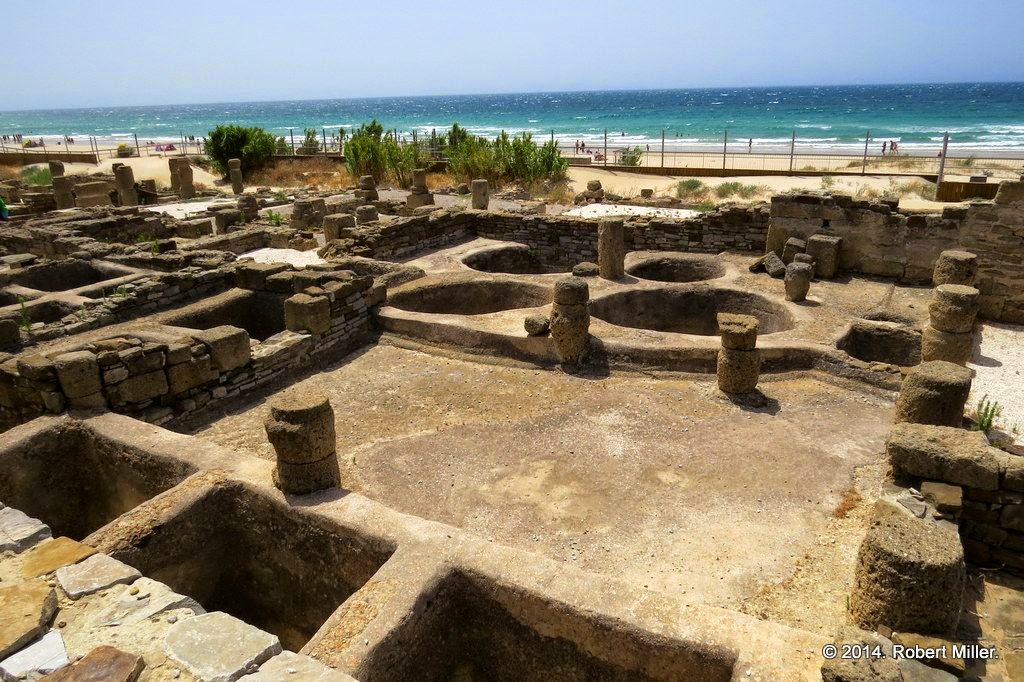 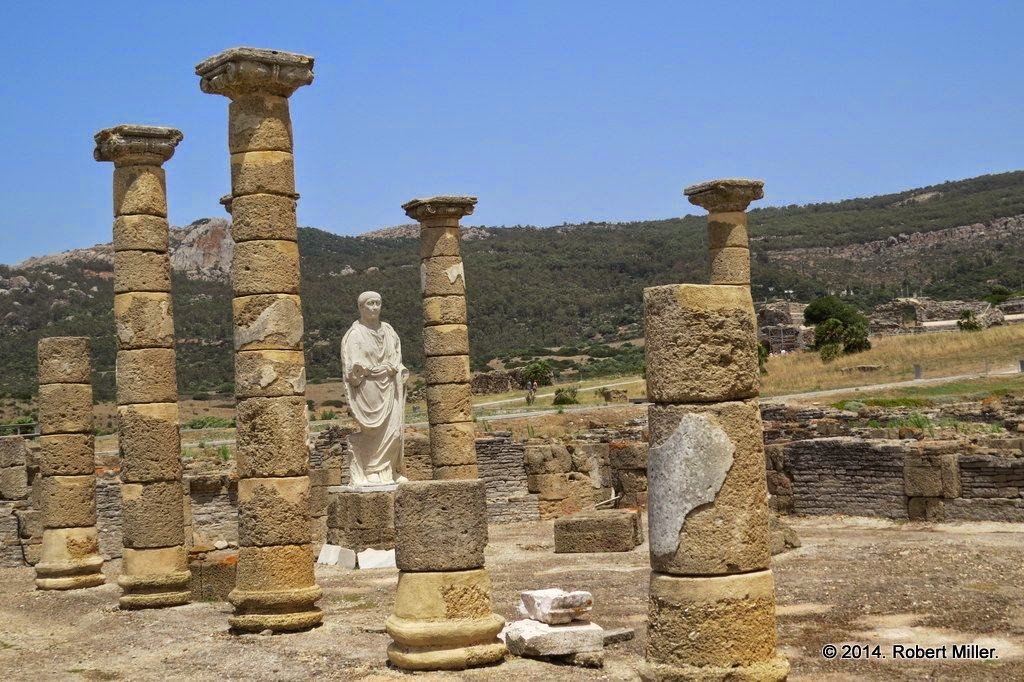 After leaving the ruins we headed up to a Griffon Vulture nesting site where we observed an adult feeding a nestling. 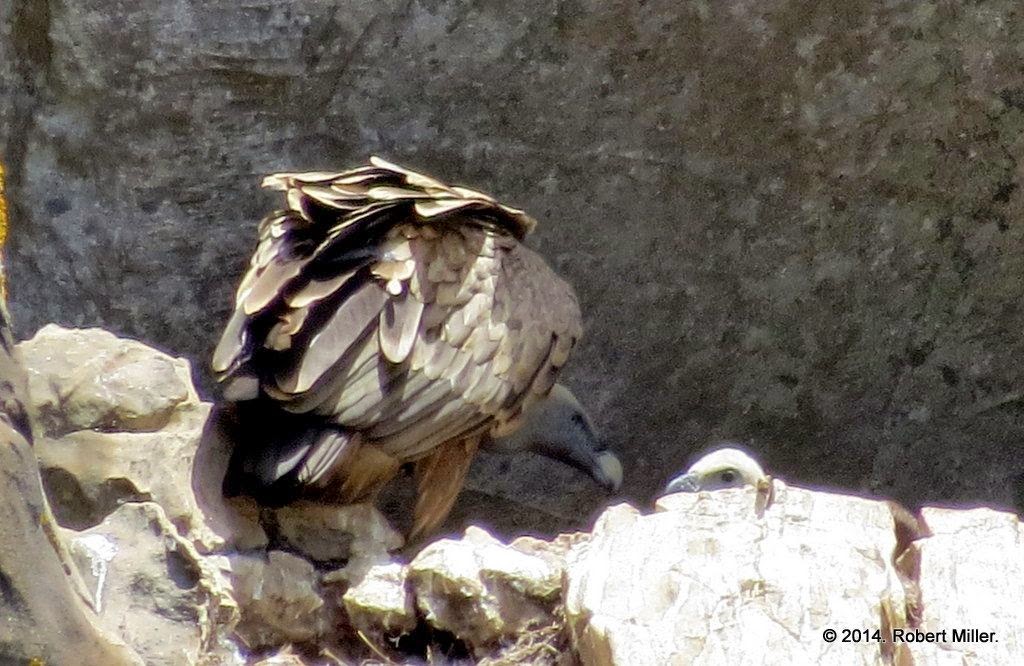 Continuing our tour we visited a breeding colony of the critically endangered Bald Ibis. There was only one nest with nestlings still in the nest. These birds occupied the site on their own after being re-introduced elsewhere in the area. The colony hangs right over a busy road, but is one of the more successful breeding sites for this species. The only truly wild population of Bald Ibis still in existence is in Morocco, but it has declined significantly in recent years. 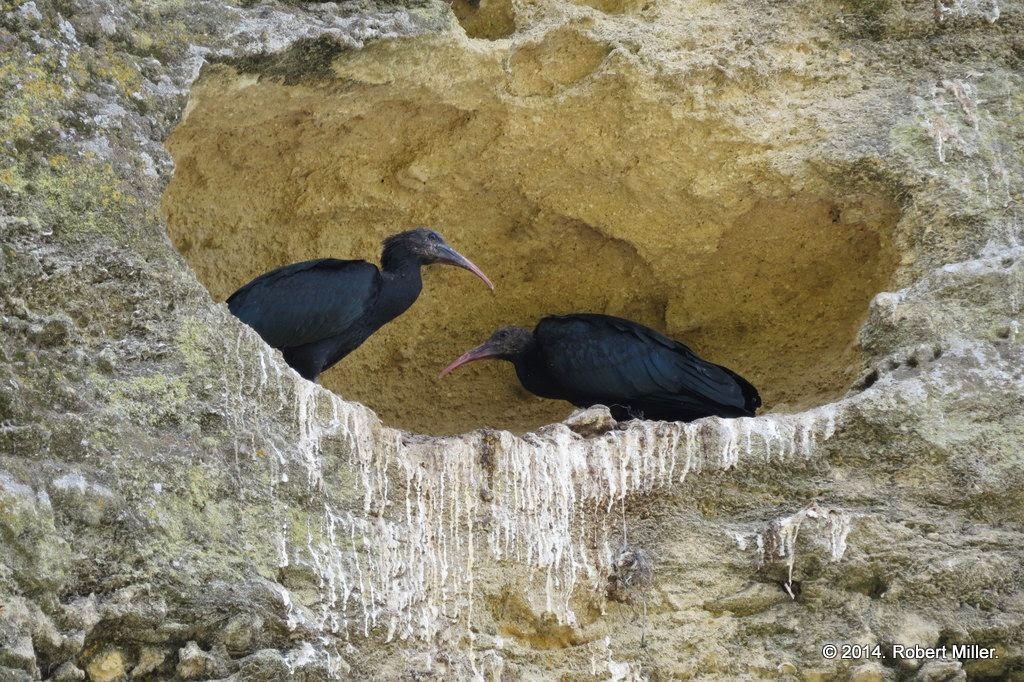 After leaving the breeding colony, we headed to a local golf course where the adult Ibis’ are known forage. Sure enough, right there on the driving range were a group of adult Bald Ibis. 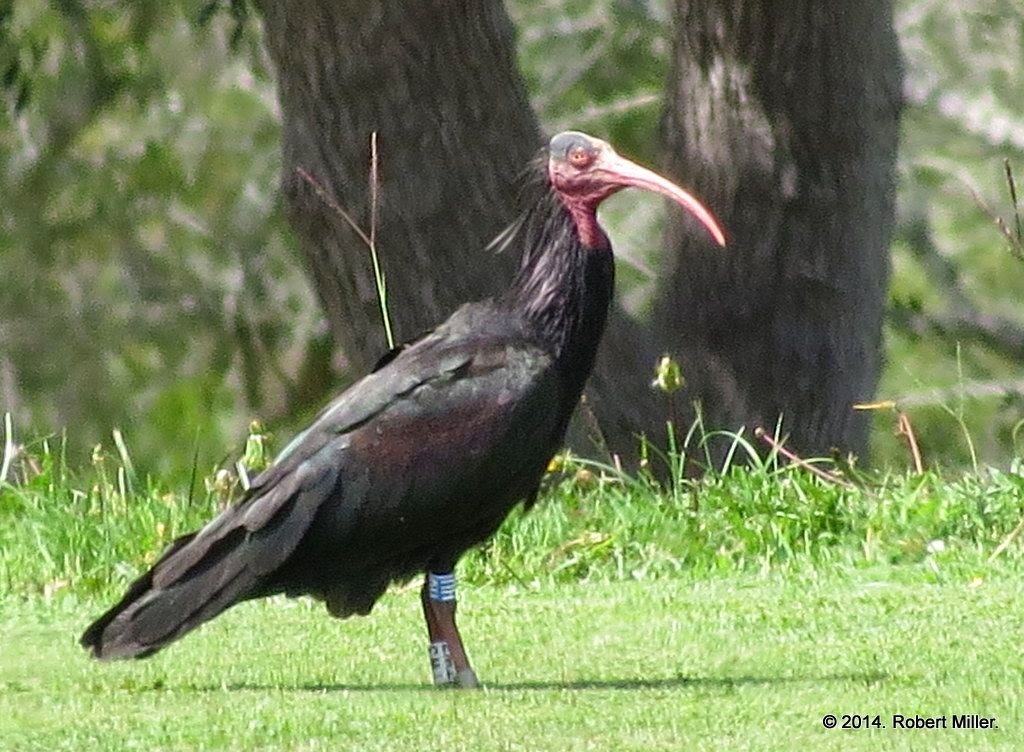 Then it was on to Laguna de la Janda. La Janda used to be the largest wetland in Europe until it was drained in the 1960’s. It remains a top place in the area to see birds. We had a fun time checking out a few raptors overhead that were willing to take on the wind (Griffon Vulture, Booted Eagle, Short-toed Snake Eagle, Common Buzzard, Long-legged Buzzard, Black Kite, and Common Kestrel), a breeding colony of egrets (Little and Cattle) and Glossy Ibis, flocks of bee-eaters, White Storks, partridges, and many other birds. We were hoping for Spanish Imperial Eagle, but it was not to be. 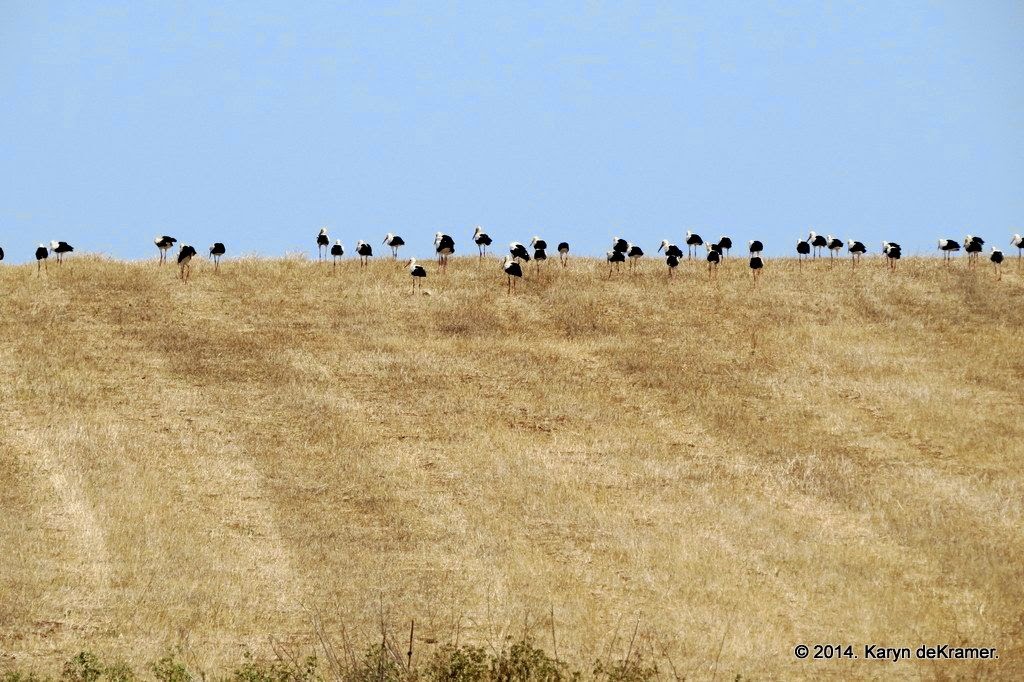 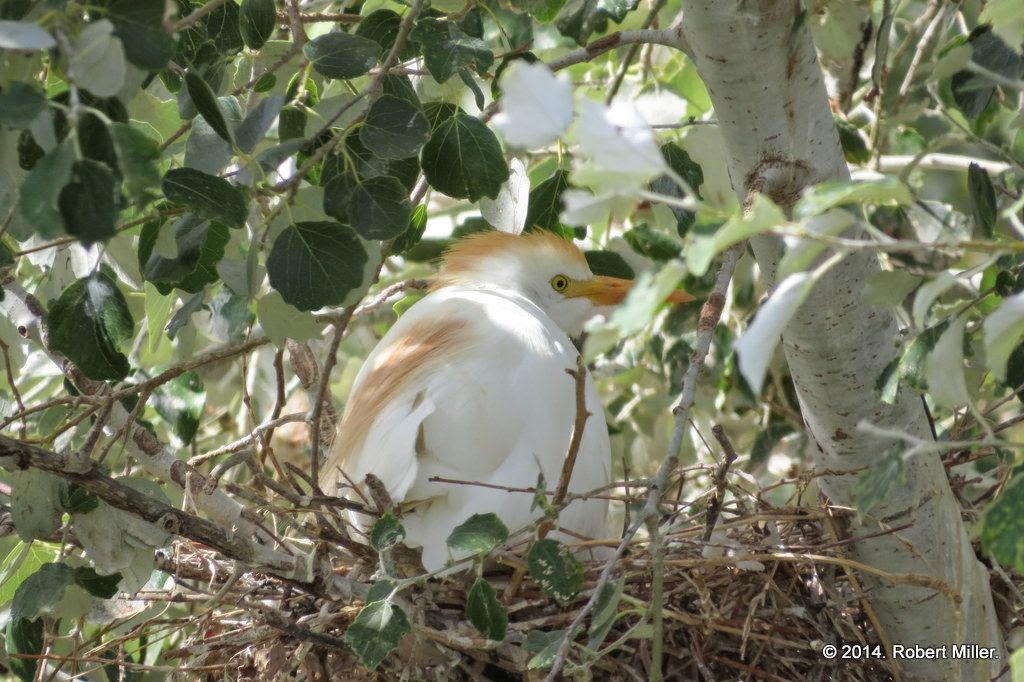 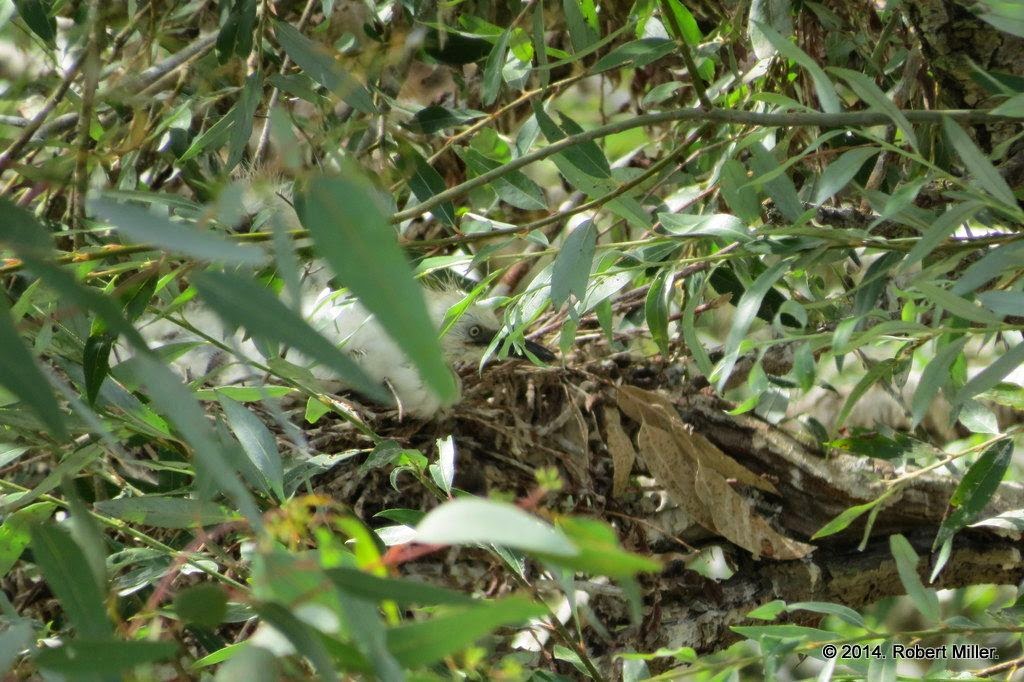 The Long-legged Buzzard is a recent arrival from Morocco. They are very similar to the Common Buzzard of Europe, their close relatives, and since their arrival in Spain they have been known to hybridize with the Common Buzzard.  The individual in the photo is difficult to distinguish from this angle, but did show reddish coloration in the tail. 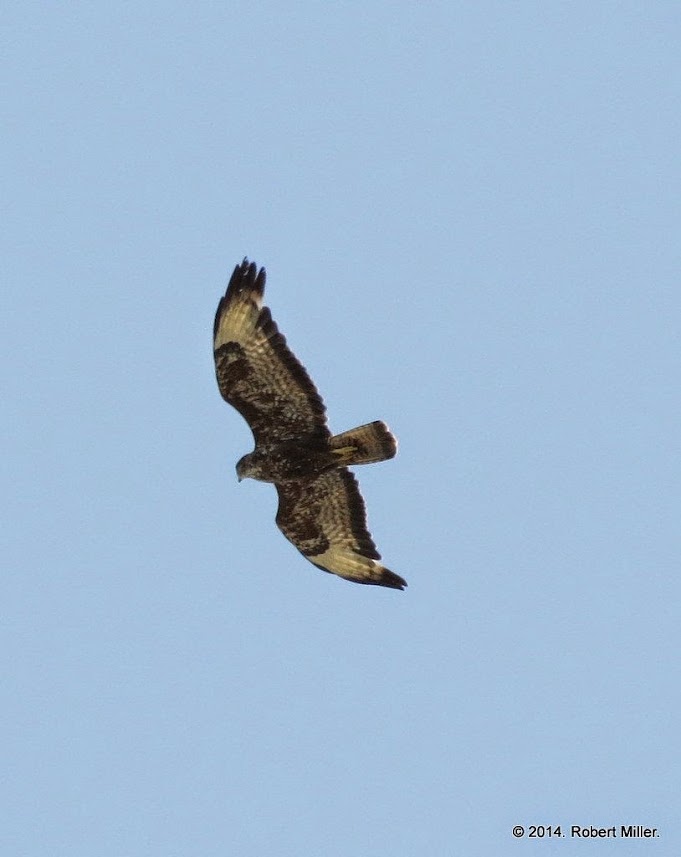 On day three, we finally had to settle in, go shopping food, clean the apartment, and find our way around town. Still feeling the effects of our travels and the eight hour change in time zones, it was a welcome bit of relaxation before the big weekend of adventure ahead.

After a half day of raptor counting at Cazalla  (count site closest to Tarifa), and a visit from my local British friend Eddy the Eagle, we were off for the biggest adventure of the trip so far – to band (or ring) flamingos in the Laguna de Fuente de Piedra. Over 300 ornithologists and volunteers from across Europe descended on this small town for the 25th anniversary of the flamingo banding. We had signed up and sent in our credentials weeks ago. It was finally time. After a three hour drive we arrived just in time for the orientation meeting.

Those people able to make it inside to the orientation meeting.

This project takes a huge amount of organization and each person is assigned specific jobs. Over 300 people with specific job assignments! The orientation was of course in Spanish which presented its own challenges for me. My take away – don’t drive into the lake and follow the instructions of your team leader. If there were other important items, they were lost in translation…

My credentials show that I was on team 1 (of five) for the herding and capture of the birds, and team 1 (of six) for the banding. Specifically I was assigned to measure the bill (Medida Pico) of each of the flamingos banded by team one (blue team). 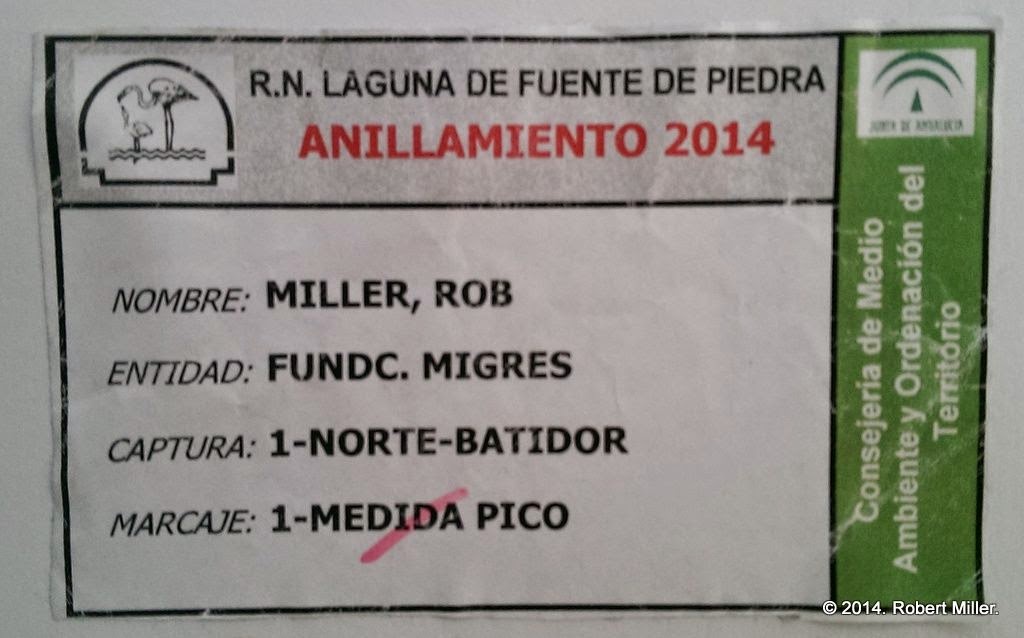 After general orientation, and then role specific orientation, we were off to find a place to stay. There were no places to be found… We went to dinner instead. It was great! At 12:30am, we decided to go to the city park and lay down before reporting to work at 4:15am!

There were a few benches in the van available and Karyn took one of those. I chose this comfy bench in the park! It is amazing how much noise there is in a city park – cars, dogs, 10 other people in the park, fighting cats, etc. It is the first time I have slept on a bench in a park, but probably not the last! In all, I got less than one hour of sleep.

My bed for the hour that I actually got to sleep.

We reported to breakfast at 4:15am, staged with our capture team at 5:00am, and headed into the lagoon at 5:15am. It was dark, wet, muddy, and very slippery. The water was low this year, only about 10cm deep. Once we had the colony surrounded, we waited standing in the water until sunrise. We then started closing in. We funneled over a thousand young flamingos into the pen. We then split into our banding teams (color coded tee-shirts) and started the banding process. Sorry, I did not take a camera due to the high likelihood it would end up in the muck. I may get some photos later for posting.

Each of the six teams would band 100 birds. There were other general teams that worked in support. The corral team would hand the birds out to the holders. The holders would hold each bird while the metal bander for each team attached the metal band and the color bander attached the color band. The bird was then held while the measurement team went to work. My job was to measure the bill for each of the 100 birds our team processed. Another measurer checked the wing and tarsus lengths. The bird was then passed on to the corsetters (Karyn and Emmy had this role) who put the bird in a sling to be weighed. The weigher weighed the birds and then they were passed to the DNA team, before being released. There was a general veterinarian team to check on any birds which presented injuries or behavioral issues. It was an amazing operation. 600 birds were banded before 9:30am! The remaining birds were released as they only band 600 per year.

It was a fantastic experience and adventure, operated by a highly professional team. I was ecstatic to be a part of it. Then lunch and the 3 hour ride home, fading from the lack of sleep. Which brings me to a beer in the local bar for wifi to post this report. Tomorrow we head back to counting raptors at Cazalla. This next week we hope to band Barn Swallows and take a whae watching tour. I’ll keep you posted.