Viento, or wind, defines the area in and around Tarifa, Spain. Wind defines the fauna, the sports activities, the wind energy industry, the land use by animals, and even the politics. The only force greater than the wind is the geology which is largely responsible for creating the wind. Wind is also the primary focus on my research here in Spain. Needless to say, the wind is always blowing here, one way or the other.

The Spanish people in the area of the Strait of Gibraltar have their own names for the directions of the winds. These names are not used in other parts of Spain not adjacent to the sea. The winds here in Tarifa are named Levante and Poniente. Poniente are the standard westerly winds blowing in from the Atlantic Ocean. They are relatively constant registering a four on the Beaufort scale (13 – 17 mph or 20 –28 kph). Poniente winds drive many of the defining activities around Tarifa such as wind energy and kite surfing. If you don’t like 13 – 17 mph winds, don’t bother coming here. As I said earlier, the wind always blows in Tarifa and that means a steady 13 – 17 mph. Then there are the Levante winds. Levante means from the place of the sun, or east wind. In my experience here, this is the disruptive system, usually lasting about three days before the system returns to Poniente. The Levante winds are funneled through the Strait of Gibraltar. As the distance between Europe and Africa narrows near Tarifa, the wind speed escalates. It’s a simple matter of physics – as the gap between the continents get narrower, and volume of moving air remains constant, the speed of the air must accelerate. And accelerate it does! On our first full day in Tarifa we travelled to Migres’ new offices which are still under construction. They are located overlooking the Strait near its narrowest point. The winds were true gale force winds – a Beaufort 8 (39 – 46 mph)! All day for three days!

In other areas of the world, people talk about the weather. Here in southern Spain, they talk about the wind. “When does the Levante return?”, “Is tomorrow a Levante?”, etc. The most popular website for the weather is Windguru.com!

The Levante wind also brings the fog, which many plants in the area depend upon. A tour of the upper elevations of Los Alcornocales National Park (located just behind and above our apartment) reveals a number of plants whose survival depends on the moisture from the fog and the Levante winds that bring it. One such plant is the carnivorous Portuguese Sundew. This plant lives in poor quality soils that receive moisture primarily in the form of fog. 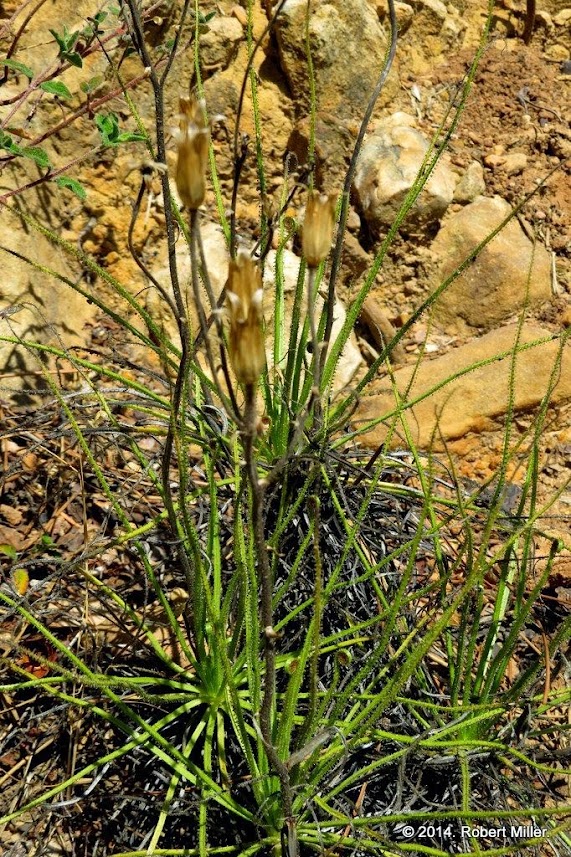 Wind has a large effect on birds as you might imagine. Migratory birds are particularly vulnerable to winds due to the distances they must travel and the varied landscapes they must cross. Headwinds can slow their progress, side winds can blow them off course, and tailwinds can even decease their lift creating a significant risk for the bird, especially over water. It is not surprising that the mortality rate during migration is six times higher for raptors than during other seasons of the year (Klaassen et al. 2014).

Humans have harnessed the energy of the winds through the use of wind turbines. The Tarifa landscape is covered in wind turbines. I imagine that they are quite profitable as the arms of the turbines are almost always turning. 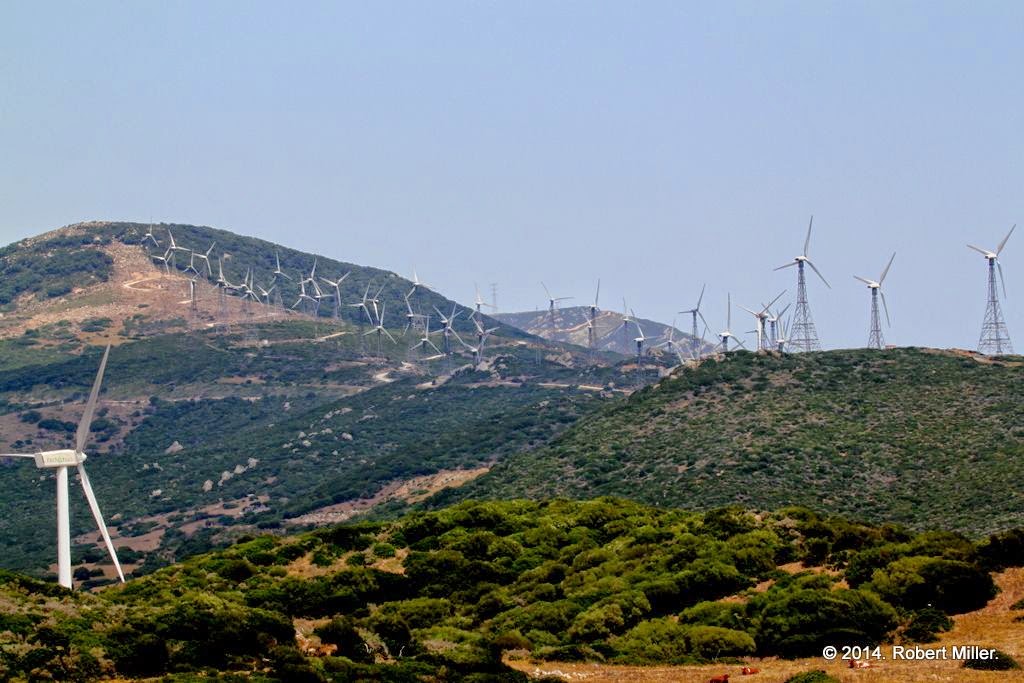 Wind energy is a critical component in our reduction of fossil fuel consumption and the greenhouses gases they release.  Unfortunately, wind turbines extract a toll on birds, especially migratory birds and large birds such as eagles and vultures. With millions of birds migrating through the Tarifa area each season, this presents a significant issue for their survival. Progress to solve this issue is being sought. The energy companies have elaborate plans in place to minimize these impacts. Ornithologists on the ground watch for birds heading into a turbine and can stop the turbine. There is an increased attention for choosing sites which can minimize collisions and collisions have decreased as a result of turbine design. However, the problem has yet to be solved. 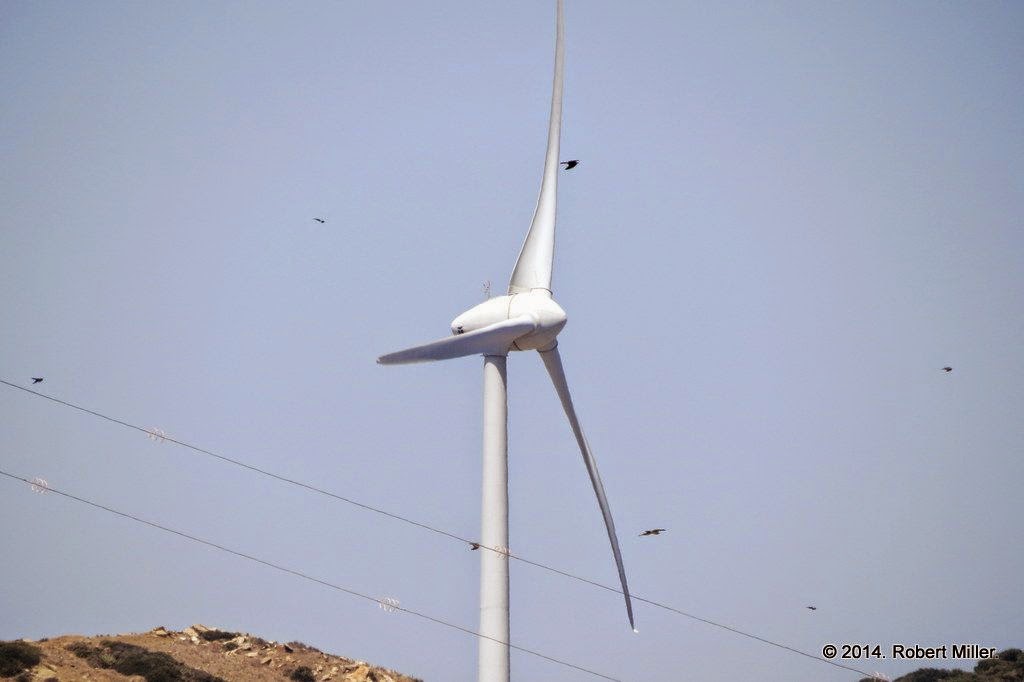 Wind turbines harnessing energy is not the only risk to migratory birds. Energy infrastructure can cause risk of collisions. On the day of our arrival in Spain, we heard of 15 White Storks dying as a result of collisions with a power line. This is a common risk for flocking birds as the flock can drive individual birds into trouble. As we band bird in La Janda, we watch as flocks and flocks of ibis and egrets nearly collide with the wires which apparently are at the precise elevation that they prefer to fly.

All of these risks of wind energy development are definitely impacting the birds. However, I don’t want to sound like I am against wind energy development. Climate change as a result of burning fossil fuels are also killing birds, probably at a much higher rate than we could ever measure. However, I hope that our awareness and ingenuity can decrease these impact through smarter siting decisions, better designs, and appropriate mitigation measures. As a co-leader of the Research and Monitoring Sub-committee of the Idaho Bird Conservation Partnership, we are working on this problem.

Before leaving the human impact aspect of this discussion, I want to bring up kite surfing. Tarifa is one of the best locations in the world for kite surfing. This last week they held the kite surfing world championship here. As we humans often do, when there is something good, we take it to extreme. As I have talked about in many posts, this area provides critical habitat for migrating birds. During spring migration birds cross the Strait of Gibraltar from Africa and need a place to rest and refuel. Many of these birds didn’t just cross the Strait, but have also been flying for days crossing the Sahara desert. Thus, the stop-over sites near Tarifa can mean life or death for these birds. Unfortunately, one such stop-over location is a lagoon on the back side of Los Lances beach. However, the growth of kite surfing in the area has significantly degraded this habitat. The lagoon is protected by law, but openly used by individuals and even by kite surfing schools. The lagoon now contains but a fraction of its former value to migrating birds, possibly eliminating some of the populations of birds that used it. It is not kite surfing that is the problem, but our lack of balance and our respect for nature from a few individual which impact impact the greater system. I hope that they can find a solution to the problem.

That is enough talk about people, lets return to the birds… 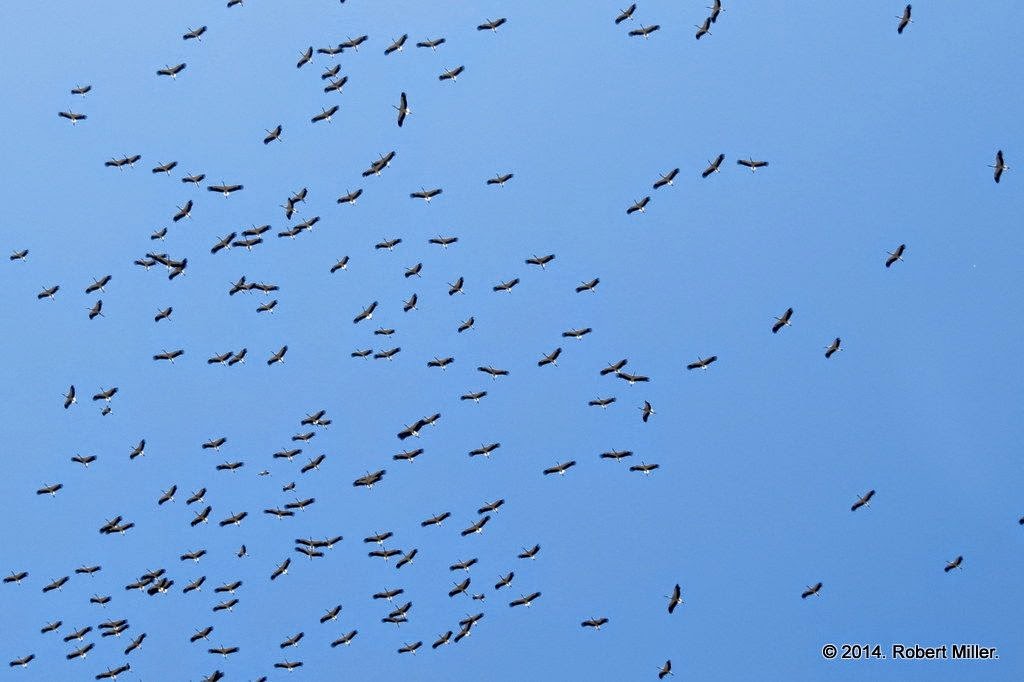 The winds at the Strait of Gibraltar effect many birds. In general the Poniente winds provide favorable winds for migration of most species of birds that cross the Strait to Africa. However, the Levante winds are another story. The distance from Tarifa to Africa is only 10 miles. However, many of the attributes that many soaring birds relay on for flight – updrafts and thermals – don’t exist over water. Thus, all birds must use powered flight to cross. Under favorable conditions (Poniente winds) this is no problem. However, Levante winds are stronger and have a higher risk of a failed crossing. A bird struggling to reach Africa could be blown out into the Atlantic ocean in a Levante wind. Thus, many species will concentrate in the Tarifa area under favorable conditions present themselves.

As the Levante winds continue, each day thousands more migrating birds arrive in the area. The fields around Tarifa can be filled with Black Kites. The wetlands near La Janda appear to be the concentration point for White Storks. On the first day after a Levante, they leave en masse. I was working at the Cazalla count site the day after a three day Levante. We counted 12,770 migrants including 7700 Black Kites and 4000 White Storks. It is the most amazing spectacle of animal movement I have ever witnessed. Needless to say, I was too busy counting to take any photos…

During the Levante winds, as Black Kites concentrate in the fields around Tarifa, we use the time away from counting the migration to band the kites for long-term population studies. Black Kites are scavenger birds, so we use a large walk-in cage with meat scraps from a local butcher shop. It takes a while to get the first bird into the cage, but then the stream of birds grow quickly. When enough have entered, we simply close the door. We enter the cage, grab the birds and place them into a bag to restrain their wings and calm them down (yes, they do calm down in the bag). We transport them to the shade for processing. We use an old army bunker nearby for the work. It is a fascinating experience to enter a cage full of raptors, each with their own set of sharp talons. However, the Black Kite is fairly docile as raptors go. 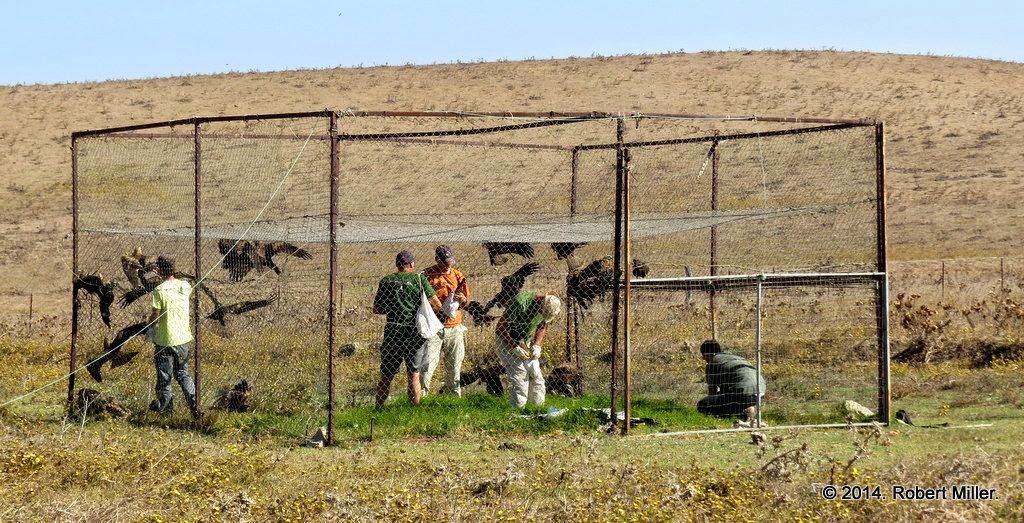 Collecting 69 kites from the cage (Rob [me] in Orange). 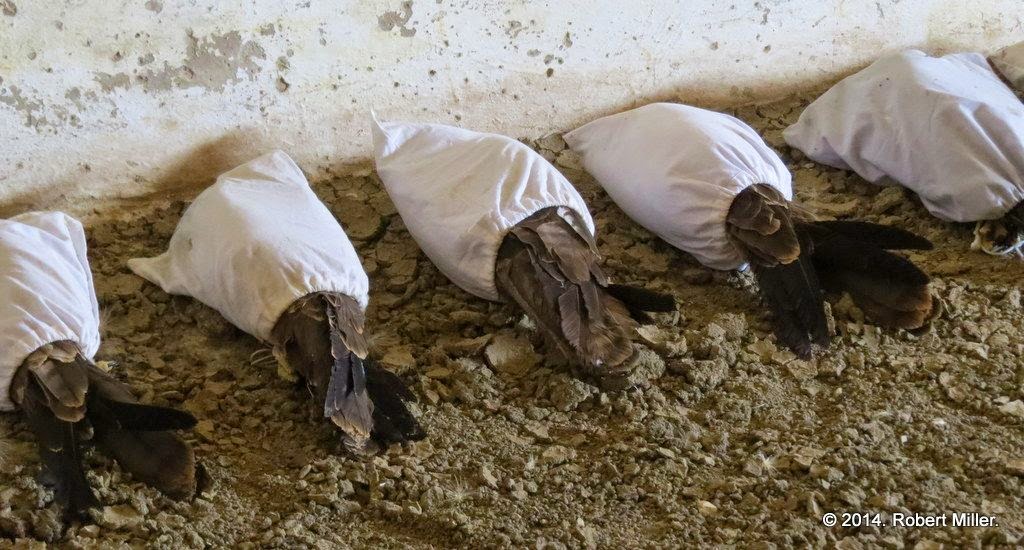 We set up an assembly line to process the birds. Andres banded, Miguel and I measured (wing, tail, culmen, tarsus), Carlos checked the molt and Alejandro recorded data and directed the process. We processed and released all 69 birds in just under and hour. 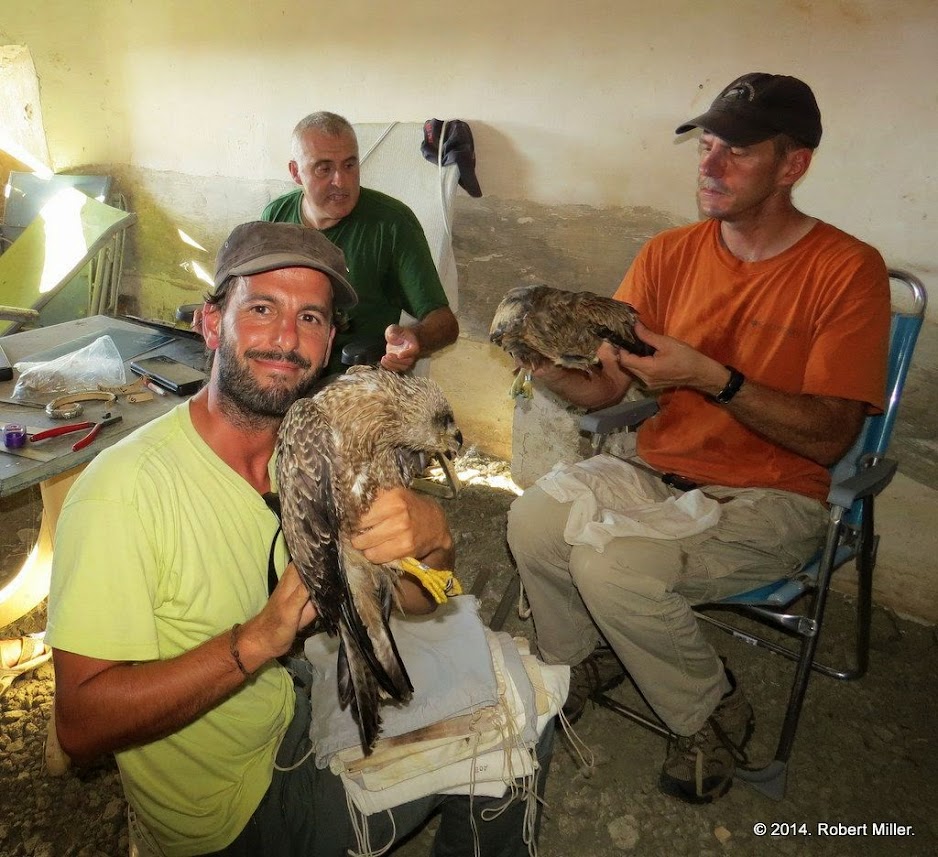 Andres, Alejandro, and Rob (me) processing kites in the bunker. 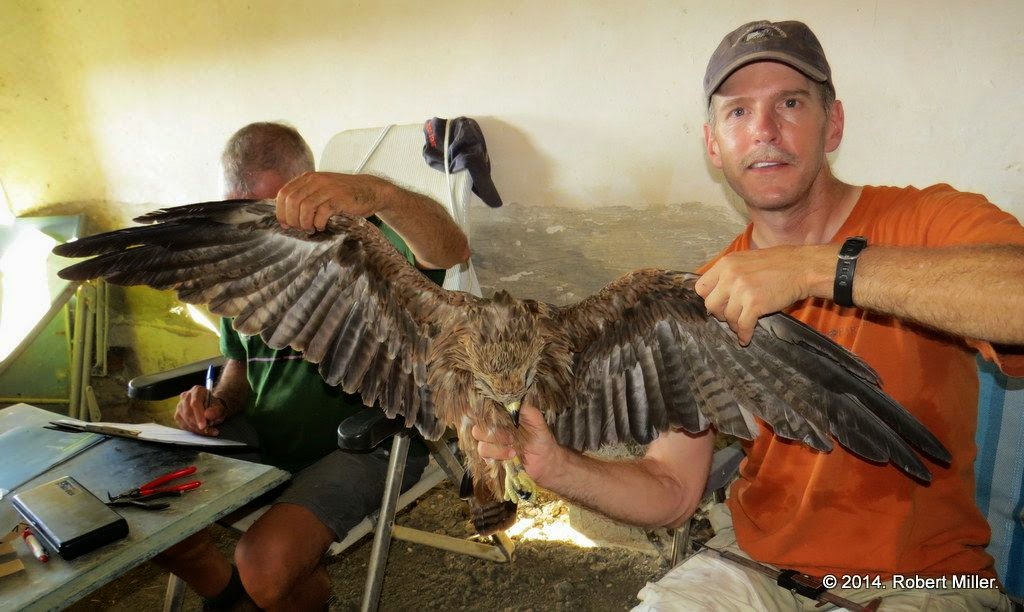 Alejandro checking the molt of an adult Black Kite.

The process allows us to examine a large group of birds from the same species all at once. The Black Kite has a large variability in size, coloration, molt patterns, etc. In the banding session after this we also captured a Black Kite which had been marked in a breeding study in Germany. Our data will be very helpful for that researcher. 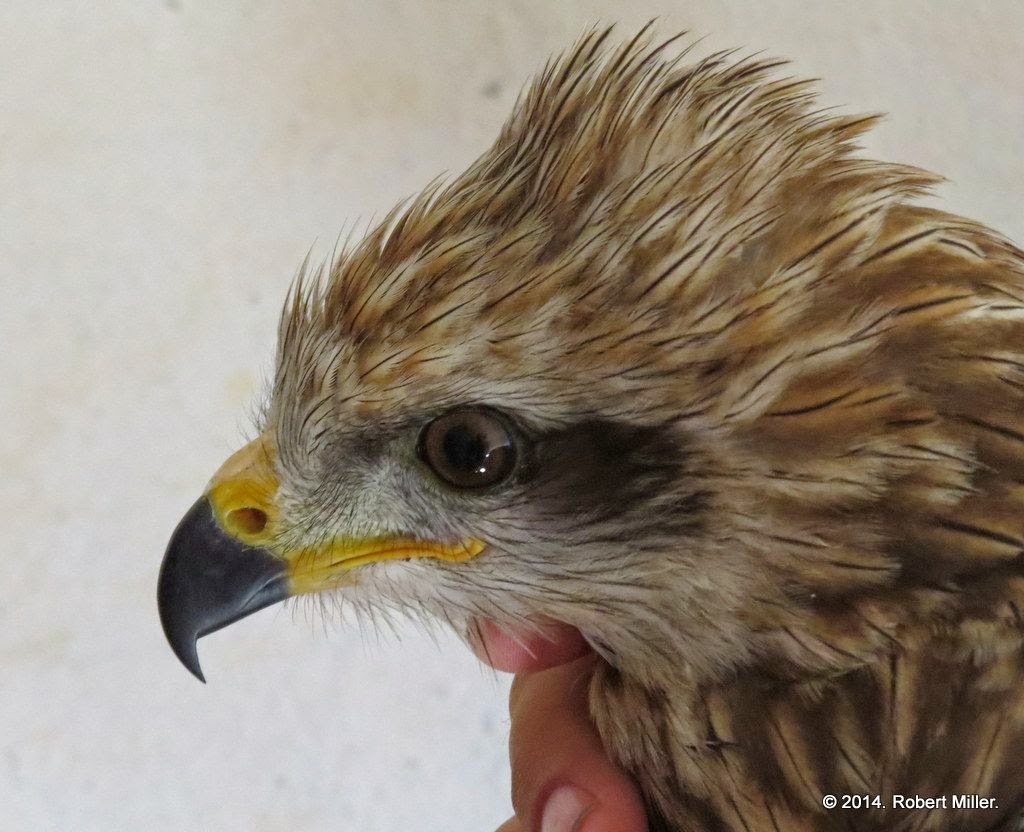 When the Levante winds arrive, the talk of Kites is not far behind.

I look forward to my last two weeks with the wind here in Tarifa before I return to Idaho. 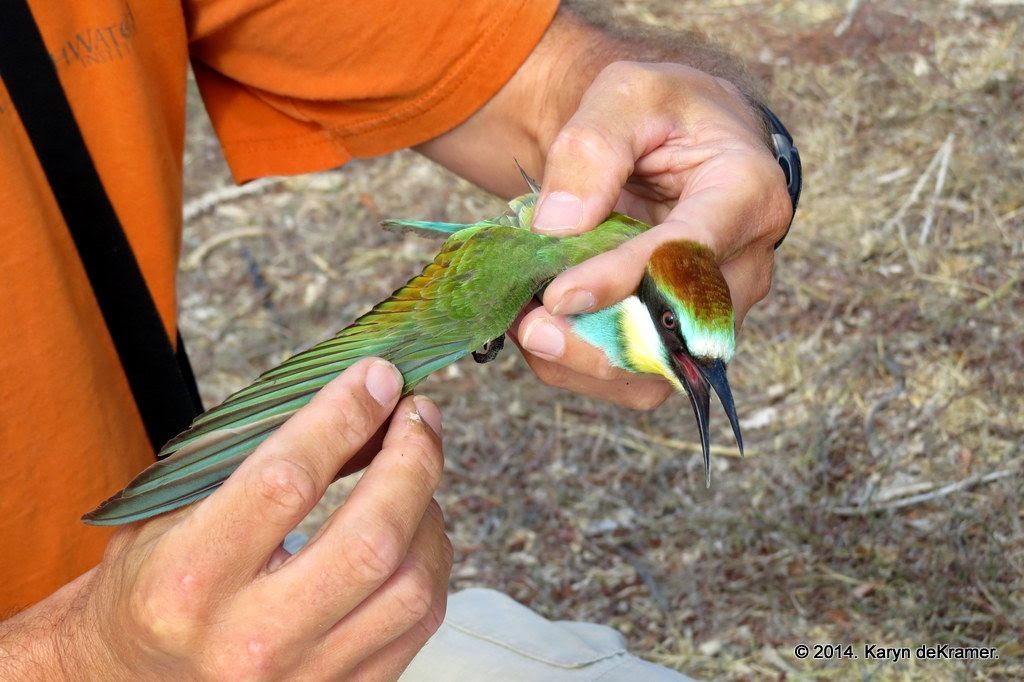 European Bee-eater that I had the honor of banding, La Janda, Spain.

On a recent hike, Karyn and I were approached by a juvenile Griffon Vulture. It walked right up to us. We are not sure if it intended to beg for food, attack us, or was just curious. We left the bird to continue to each grasshoppers from the grass. 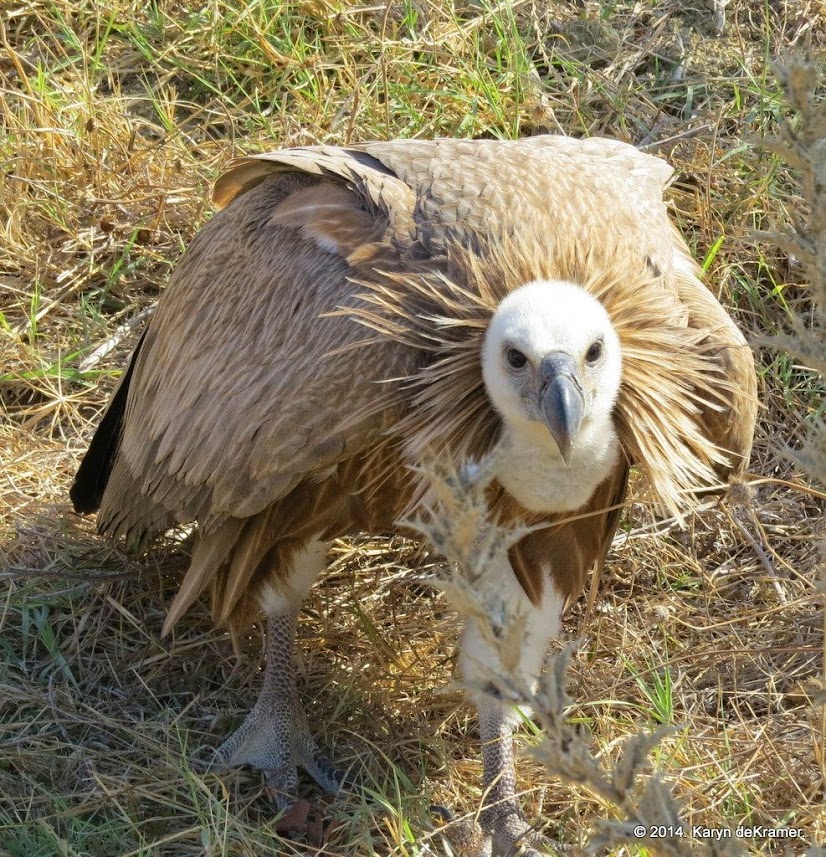 For more background on our two months of studying birds at the Strait of Gibraltar in partnership with the Fundación Migres and Boise State University’s Intermountain Bird Observatory, refer to my last eight posts.

Post 4: In and Around Our Temporary Home in Pelayo, Spain (Accidently deleted)