The Challenging Life of a Wild Raptor

The winter season finds me spending most of my time behind a computer screen. My fall migration field season ended October 31 and my full-time spring woodpecker monitoring season does not begin until April 1st. That makes for five months of florescent lighting, confined spaces, and LED screens.  However, every week or so I have the opportunity to spend a day in the field continuing the long-term monitoring of wintering birds in the Treasure Valley by banding local raptors. These days not only contribute to our long-term datasets, but also play a significant role of maintaining my sanity.

Last week I had the opportunity to band my first ever Prairie Falcon. These birds come through our fall migration station occasionally, but are difficult to trap. I have matched wits with a few over the years, but have never come out with a bird in my hand. This last week, we caught two on a single day! They are beautiful birds (aren’t they all?). I also learned a new hands-off weighing technique! 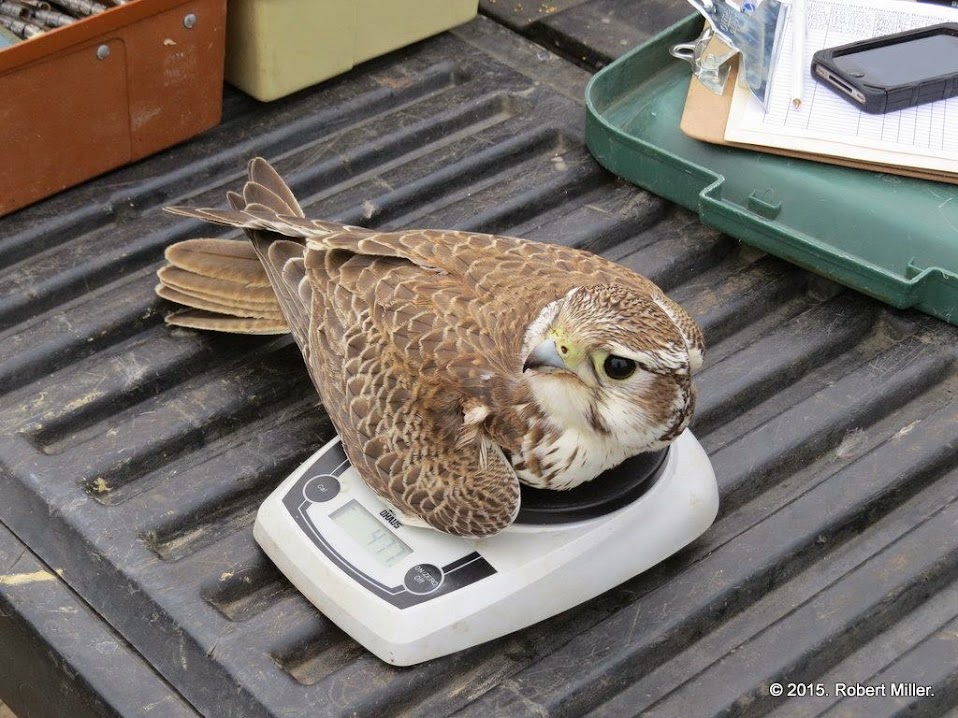 However, my excitement was dampened when we discovered the bird was injured (not by us…). This was the first of a number of observations I highlight in this post providing insight into the difficult life these birds face on a daily basis.

This first bird had an injury on the leading edge of its wing. This most likely occurred when the bird hit a fence or wire, possibly during the pursuit of prey. It looked to be healing well. The bird was in generally good health so there is a good chance it will make it through the winter. 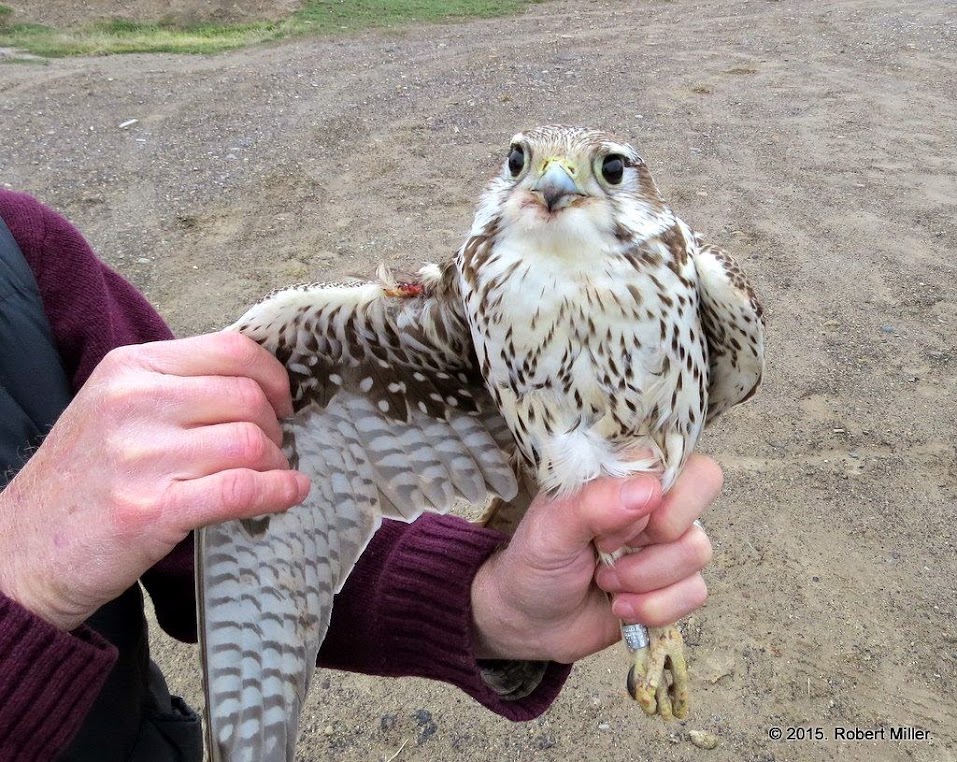 The second Prairie Falcon of the day also had a wing injury, this one didn’t look nearly as good. Once again, the bird was in good physical shape other than the injury, so it has a chance to survive. We weren’t able to tell the cause of this injury, but it looked like a burn, possibly the result of electrocution. 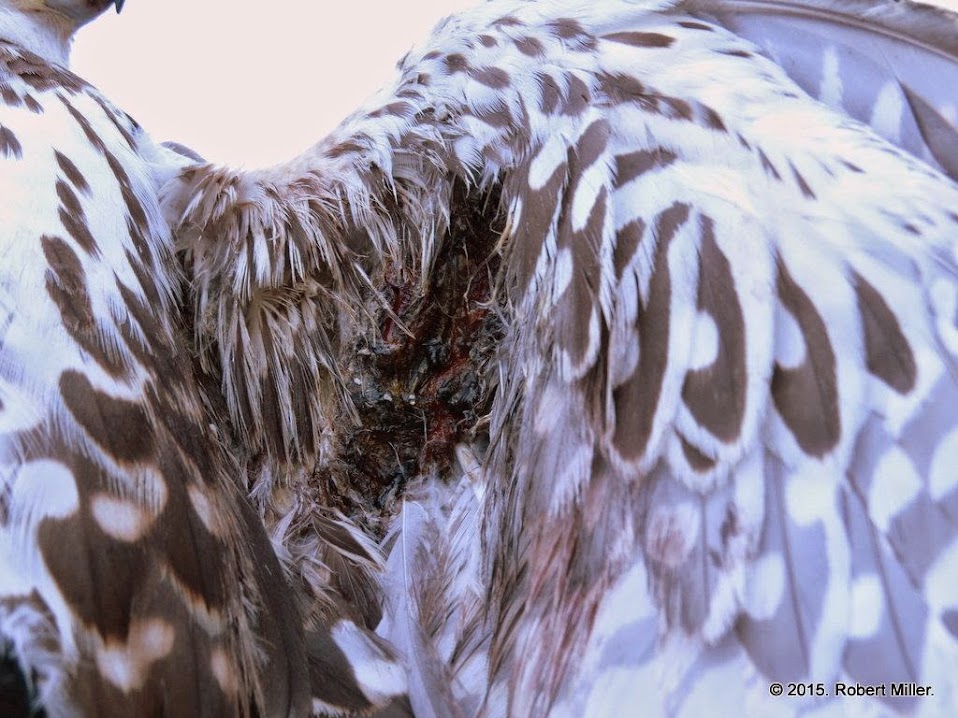 On Monday, I made it out into the field again. We were only successful at banding American Kestrels on this day, however, while in the field we did observe a few mortalities. Here is an apparent electrocution of a Red-tailed Hawk.

I contacted my friends at Idaho Power who sent a crew out to retrieve the bird and retrofit the pole with any additional safety measures to try and prevent future mortality. This particular pole was already fairly well protected. Most of the lines were already wrapped with insulation.

Some injuries heal, but they can still have lasting effects. This male American Kestrel was missing two talons from its right leg. No indication of what the original injury was, and its feet were otherwise functional.  This bird was in good shape and had an apparent mate nearby. The injury probably has little effect on its overall success.

The last discovery of the day was a juvenile Red-tailed Hawk that had apparently been hit by a car. We are not sure if it happened while in pursuit of prey or just a simple mis-judgment of some sort. Studies have shown that birds adapt their flushing distance based on the speed limit of the road. This is a clever adaptation, however, it puts them at risk to the few cars which exceed the average speed on the road. Of course, birds like humans are affected by disease which can slow their reaction times when they aren’t feeling well. This can lead to increased risk of collision. In this case, we will never know the events that led to this bird’s demise.

The result of two days in the field, is that we found three injured birds and two dead birds. Raptors are such magnificent creatures, but their life history make them vulnerable to injury, especially by man-made influences. I speak with many people who naturally have sympathy for prey species, but the business of predation is very dangerous indeed. For most predators, the highest risk of injury and death comes during the act of chasing and killing their prey. Human influences are generally additive on top of these natural risks.

The true reward of banding birds is receiving information of a birds long-term survival. On Monday we trapped an American Kestrel that was originally banded as a nestling by another team at Boise State University back in 2009.  This bird is now six years old. She was in great condition and was hanging around a male (most likely her mate). She likely breeds in the area where we found her, which was 30 miles from where she was hatched six years earlier. The average lifespan of American Kestrels is under five years, with the oldest recorded in the wild being 11 years. At six years she is doing well. All indications are that she still has productive years ahead of her.

I am always honored to be able to work with these birds. I have had the opportunity to band thousands of birds on two different continents. Every time I release a bird, I wish it well. Often out loud. I usually say “Happy Hunting!”, or sometimes “Live long and prosper!”, or even “Don’t get caught again!”.

They are marvelous creatures. I am still in awe of their power and resiliency. 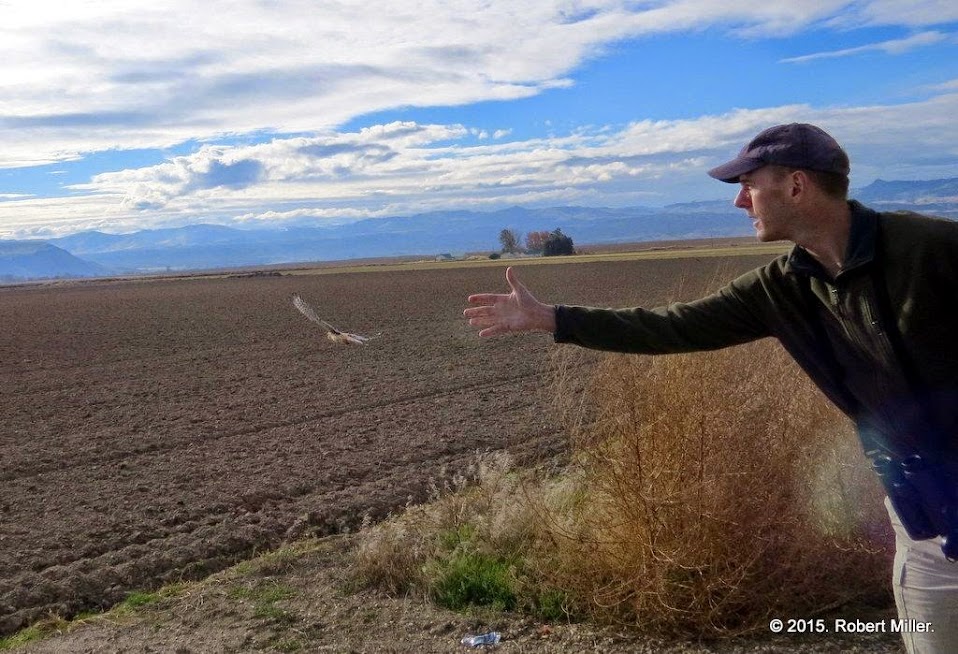 Release of American Kestrel after banding.