My fourth and final week of Pileated and White-headed Woodpecker surveys in the Boise National Forest has come to a close. The project is over for this year, but no time to waste. It is just four days until I launch my next project surveying for eight woodpecker species within the Caribou-Targhee National Forest. The previous reports on my Boise National Forest project can be found here: Into the Woods-The New Field Season Begins,  Woah, Seven Woodpecker Species on One Transect, and Holes in a Tree.

My final bout of surveys included two routes near Idaho City and one route just east of Horseshoe Bend, Idaho. Most of our survey routes are on old forest roads, although some are on trails. The surveys consist of ten minutes at each of ten points, separated by 350m (1/4 mile). I start the first point 30 minutes before local sunrise, usually finishing the last about 9am. In this case sunrise is calculated when the sun reaches an angle relative to the horizon assuming that the terrain is flat. In many cases, because of local terrain, I may not actually see the sun until points six, seven, or even point nine.

The first day was the most exciting for numerous reasons.  Between points four and five, before the sun was visible, I was walking around a bend in the road. I was generally glancing upwards to look for bird activity when movement caught my eye up the road. About 50 meters (~50 yards) up the road a mountain lion jumped down into the roadway. It paused momentarily broadside and looked at me. Wow! I still get goose bumps thinking about it. I reached for my camera as it ran about 50m up the road and over the edge and out of sight. Wow! Really Wow! It was reasonable dark colored, darker than most photos, but may have been enhanced by the low light. What I remember most is how long it was. Long torso and long tail extending across the road. Wow! I am still in awe of the moment. While doing field work I often find recent mountain lion tracks. Probably about a 6-10 times a year. But I have only see a wild mountain lion on one other occasion. I know that they have seen me much more often.

Helping to enhance the first day of surveys in this bout, was the fact that I detected both Pileated and White-headed Woodpeckers, our two target species for this project. I finished the day ecstatic, on a fieldwork high! Definitely the highest of the season!

The last two days of surveys were not as fulfilling – no mountain lions, no Pileated Woodpeckers, and no White-headed Woodpeckers. 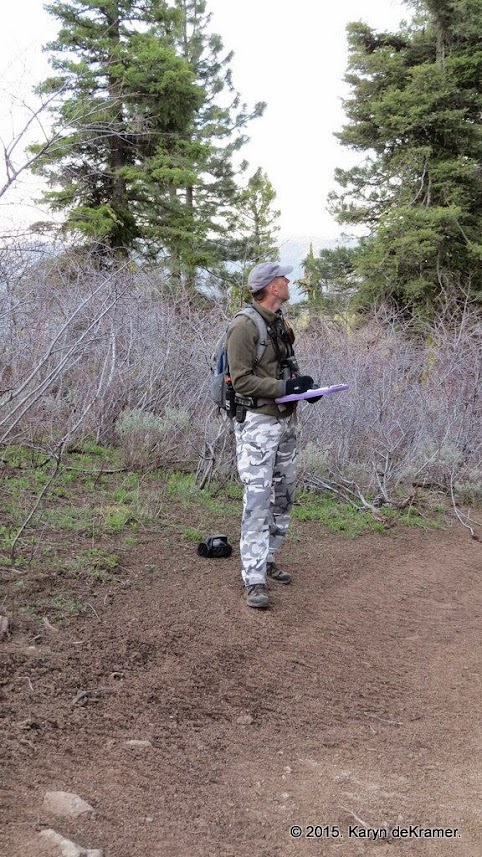 Proof that I do work in the field! Deadman Ridge, Boise National Forest.

Karyn joined me for the final few days of work. It was great to spend time with her in the field. If you are reading this you probably know that I am a goshawk specialist, leading the Intermountain Bird Observatory’s goshawk research for the past five years. During our woodpecker surveys, if I am in the area of goshawks nests, I often spend some of my afternoon time checking the status to report back to the forest service. In addition to monitoring woodpeckers, most national forests in Idaho including the Boise, also monitor goshawk productivity within their forest. I am not responsible for the Boise National Forest goshawk surveys, but I try to contribute when convenient.

Karyn and I hiked in to check the status of three goshawk nests one afternoon. One had fallen completely out of the tree, one was in a state of disrepair, but one had been built up and appeared to be ready to go. This means that a goshawk is committed to the territory, but not necessarily a pair. If a pair is present, egg laying should begin any day now. We did not broadcast any calls as goshawks can be very sensitive this time of year. We spent a minimum amount of time looking around and then retreated quickly to leave the birds in peace. The forest service will check the nest a again in three or four weeks. It got me excited for my upcoming goshawk season which kicks off in early June. 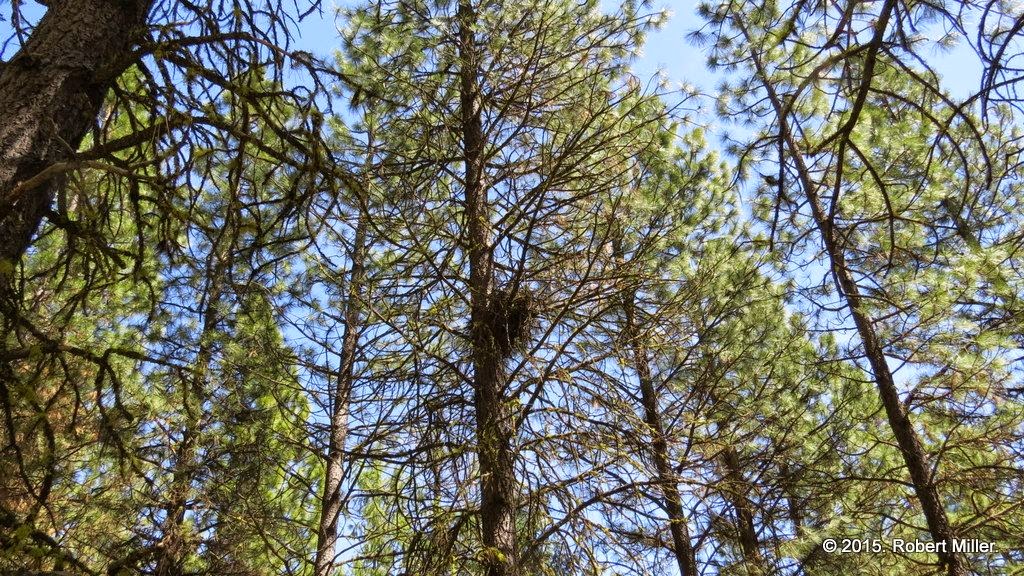 During my surveys, Karyn played photographer to capture some of the awesomeness of the outdoors. At one point we were swarmed by a flock of Mountain Chickadees. Can you find one in the photo? 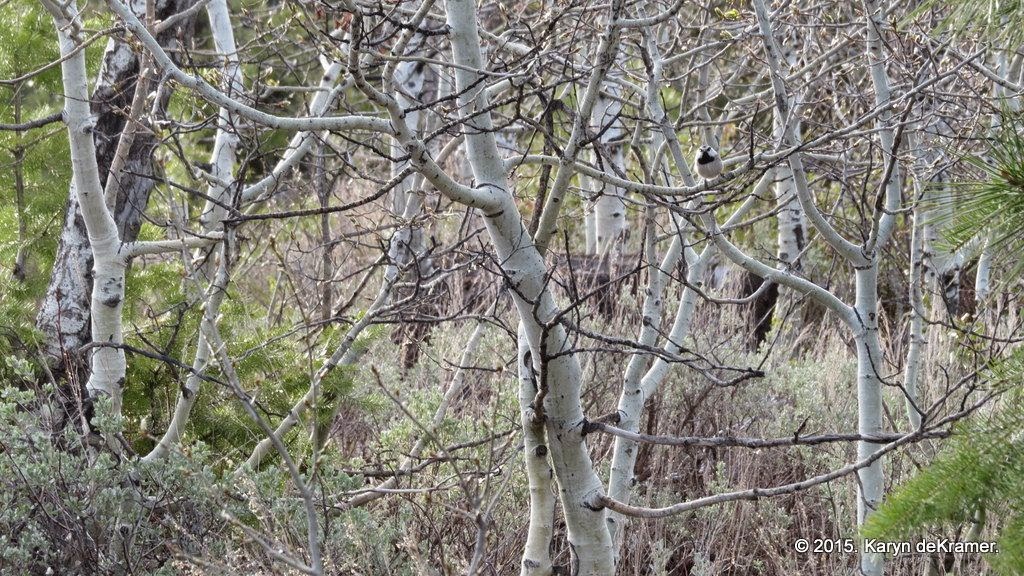 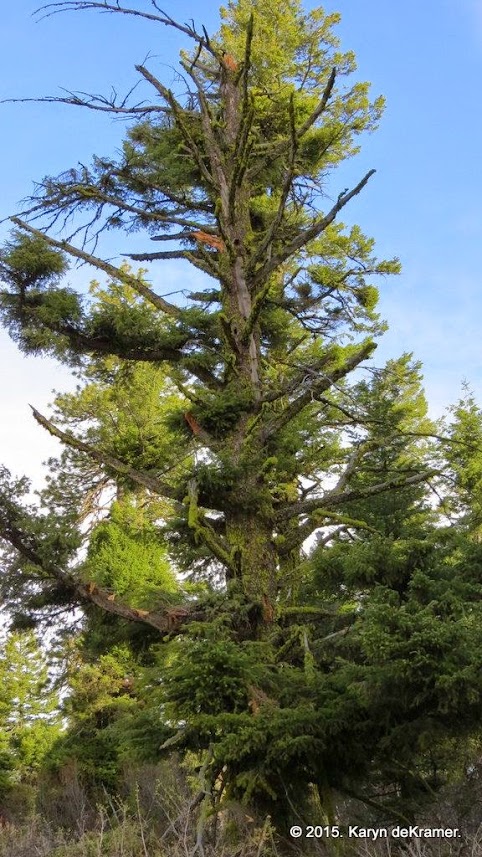 For me the first project is over (Jessica still has two routes next week). Next up for me, surveying for eight woodpecker species (Downy, Hairy, American Three-toed, Black-backed, and Lewis’s Woodpeckers, Northern Flicker, and Red-naped and Williamson’s Sapsuckers) within the Caribou-Targhee National Forest. I will be there to train my two-person crew for a week and then pick up a few routes solo, before heading back home. Stay tuned for updates!