Karyn and I just returned from a week long vacation exploring the wilds of Yellowstone National Park. This is our first in a series of posts highlighting some of our observations. Our activities included lots of wildlife watching, meeting with our friends from visits past, and a daily hike.

We were lucky enough to observe wolves and grizzly bears every day of our visit. On one day, we accomplished the highly sought after “three dog day” – the trifecta of sighting wolves, coyotes, and red foxes on the same day. The red fox is actually the most difficult to find of the three. On the same day we saw the dogs, we also observed both bear species in the park – the duo of black bear and grizzly bear. This isn’t quite as big of an accomplishment if you know where to look. In all five cases, we had multiple observations of each species that day. Wow. That doesn’t happen very often. I came up short of calling it a “perfecta” as we did not observe wolverine, fisher, pine marten, mountain lion, Canadian lynx, bobcat, and any number of lesser mammalian carnivores. You have to dream big! Regardless, it was quite an exciting day.

There were three wolf packs in the northern range of Yellowstone that were regularly visible during our visit. We would observe just two of them as we were not willing to travel too far to observe the “Prospect Pack”. We did look for them, unsuccessfully, on the day we had to travel to Gardiner to resupply. We mainly limited our time to the Lamar Canyon Pack and the Junction Butte Pack. 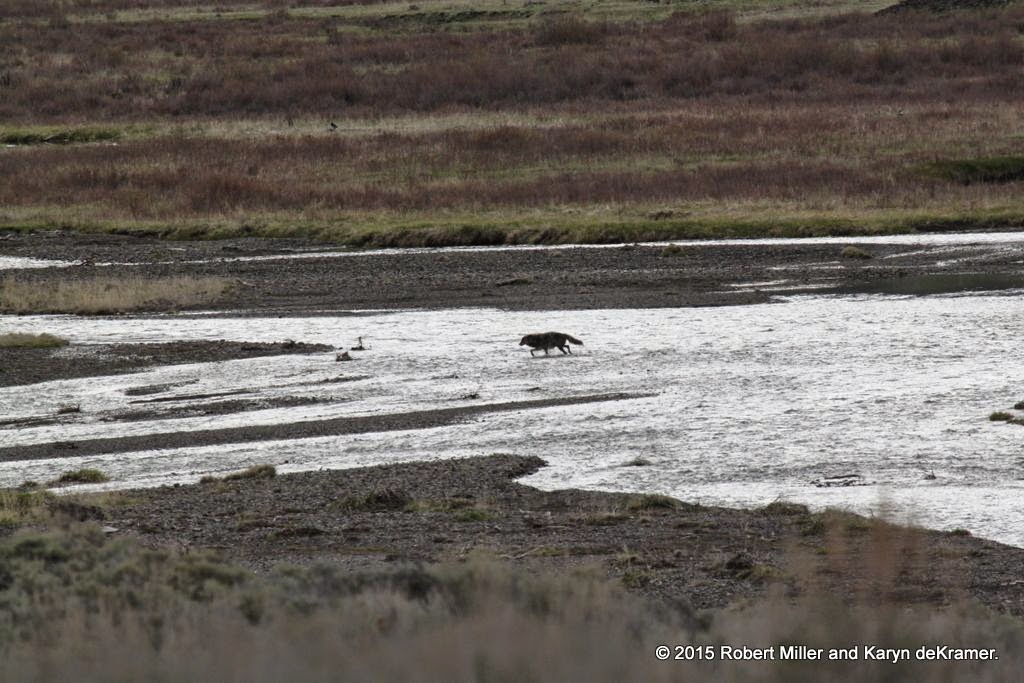 One evening we listened to wolf howls in three different directions. This suggested that there was a very good chance that they would all come together. As we waited, the wolves snuck down close to us and crossed the footbridge just 50 meters from where we were parked. They were hidden by the river bank until they came up on the other side. By the time I grabbed the camera, they were 100 meters away and appeared to be on a mission.  Night would fall before we were able to observe them hunting.

On our last morning of our visit, the Lamar Canyon wolves decided to make a scene by standing, and then bedding, in the middle of the road. The park rangers chased them off the road and up a hill. There they entertained us with five to ten minutes of group howling. It was an awesome sight and sound that I will not soon forget!

Five Lamar Canyon wolves howling after being displaced from the roadway.

In addition to the howling, the wolves put on a show of wrestling to further strengthen the pack hierarchy. Note the grey wolf with its paws on top of the black wolf. The black wolf just had to take the humiliation, otherwise it would be likely settled with violence. 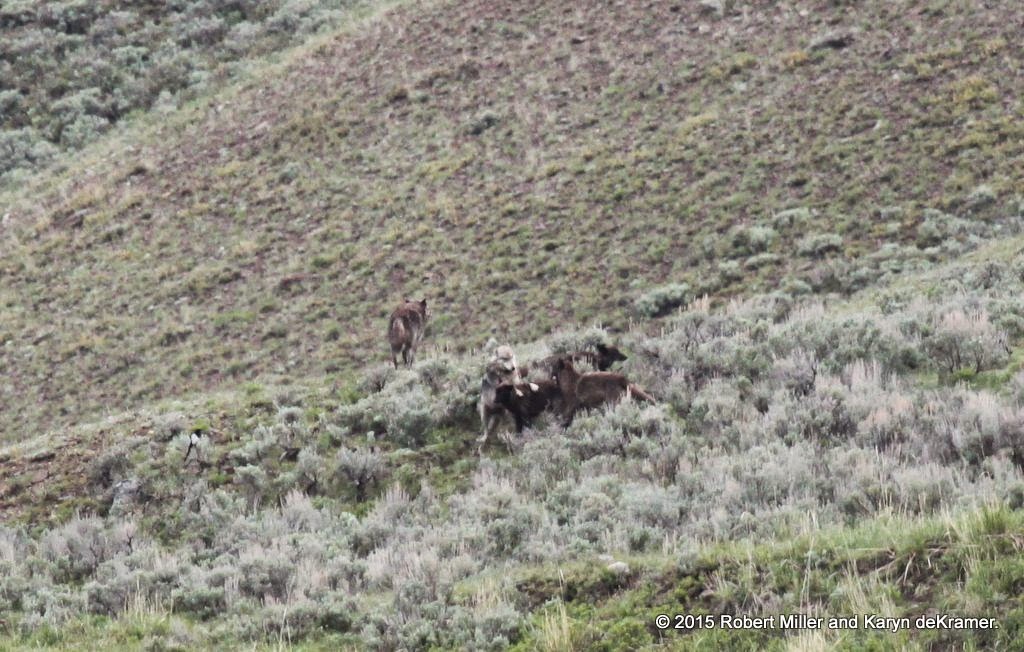 The other pack in the area is the Junction Butte Pack. As you might guess, their usual range is centered near Junction Butte, however we usually observed them during their excursions into the Lamar Valley where we observed them travelling as far east as the buffalo ranch, just a couple of miles from the Lamar Canyon pack’s den. 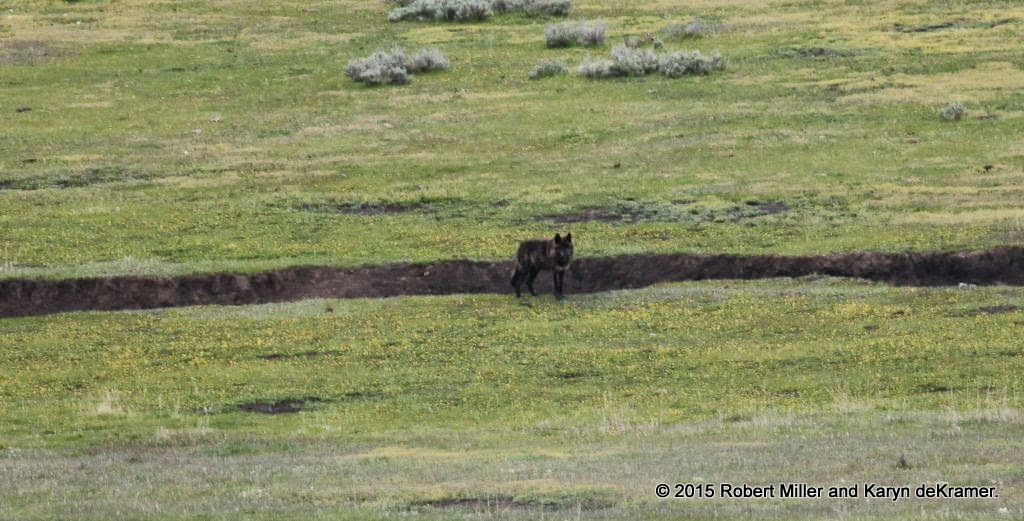 The wolf experts told us that there are a large number of young solo wolves roaming the park. These wolves could be loosely associated with one of the existing packs. This particular one had some fun chasing the sow grizzly bear and her three cubs (pictured below in the bear section), before crossing the ridge to our point of observation. I like the fact that there are wild wolves that we don’t know every detail about. 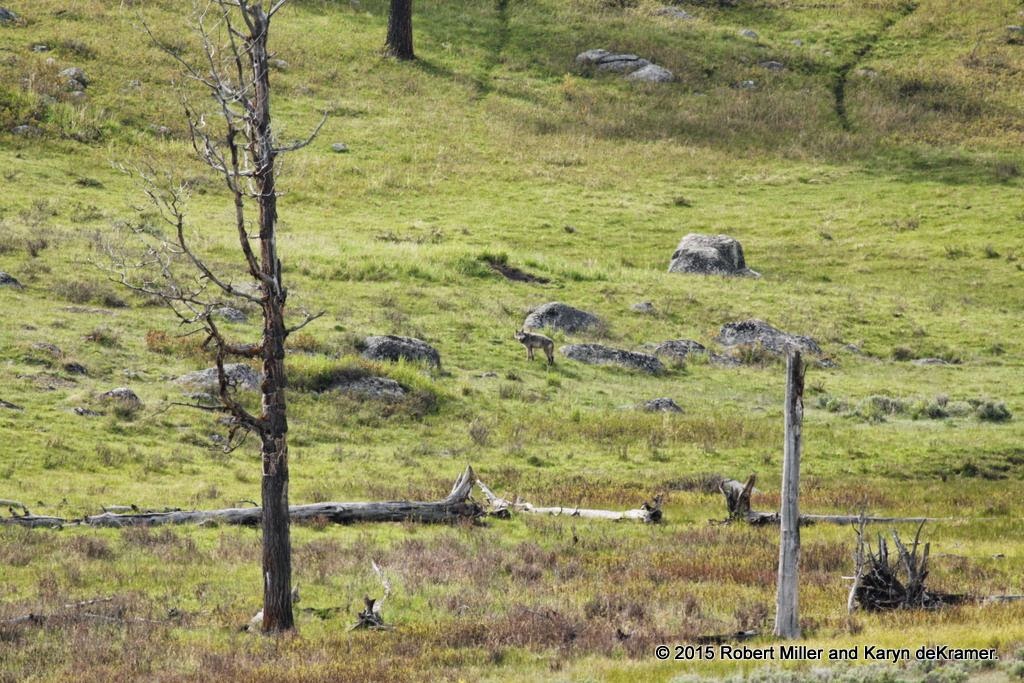 The easiest dog in the park to observe is the coyote. This particular coyote was observed while we were hiking to the upper Slough Creek meadow. It was harassing two Sandhill Cranes. We don’t think the coyote was successful in getting the nest, but we could not be sure. The most difficult dog to find is the red fox. We were lucky and saw three individuals (one pair, one solo) on our three dog day. This clever fox was moving down Elk Creek where it picked up an egg without us even knowing it. It is a good sized egg. 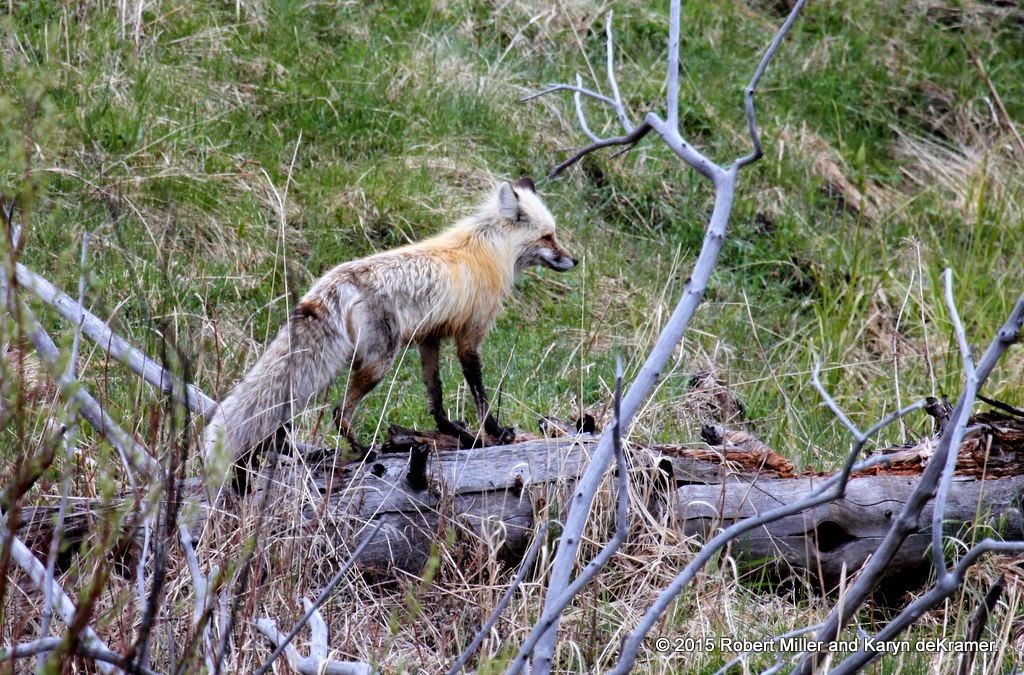 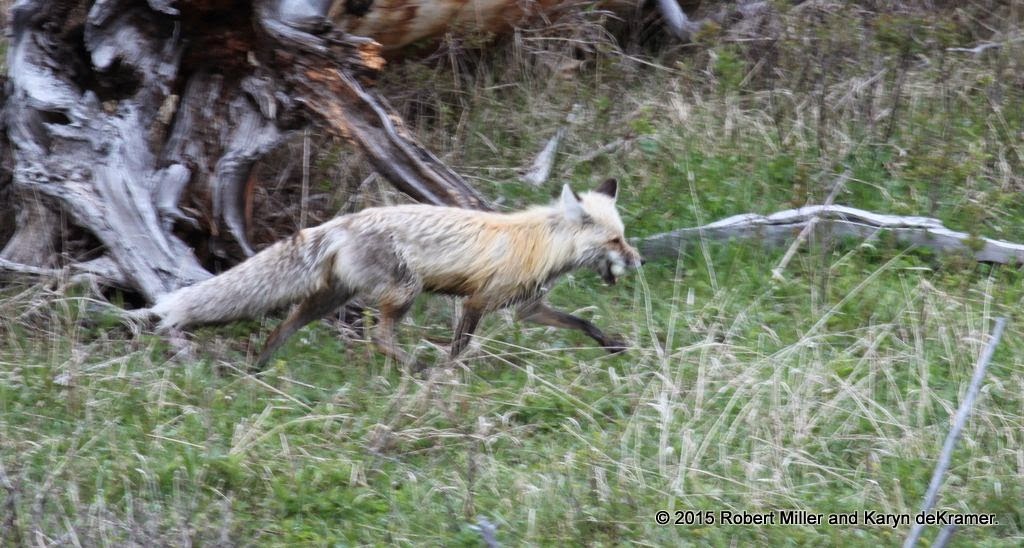 Red Fox in Elk Creek with an egg.

Many people travel to Yellowstone in the hopes of seeing grizzly bears. We are no exception. However, we prefer our observations to occur while we are near our vehicle and not on the trail. We did observe some grizzly bears on two of our hikes, but each were at least a mile away.

Grizzly bears are easy to observe in the park this time of year if you know where to look. They generally don’t move too far in a day, so can often be found on the same high meadows day after day. For the entire week we were in the park, a courting pair of grizzly was regularly visible on the “K meadow” high above the confluence of the Lamar River and Soda Butte Creek, and a female with two cubs-of-the-year were regularly visible on the “third-finger” of mount Norris. Yes, it does take a while to learn all the local geographic lingo!

Our grizzly highlight was observing “Scarface”, a 27-year-old bear about 100 meters away from us at the confluence. We spent all evening watching him before he crossed the river and headed north. 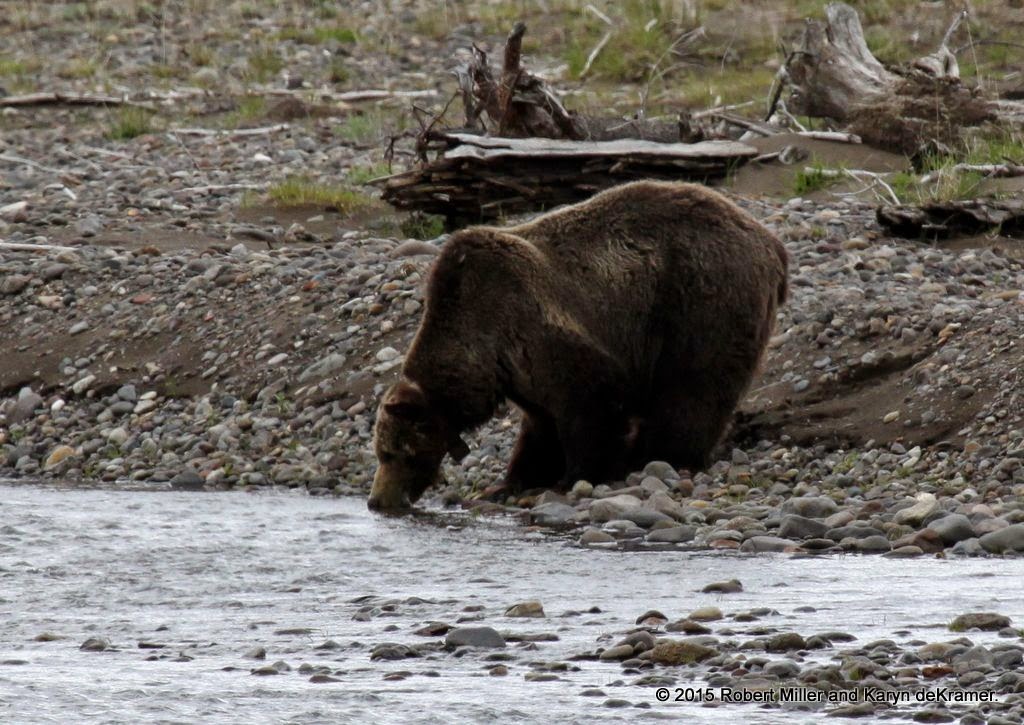 Grizzly bear “Scarface” getting a drink from the Lamar River. Grizzly bear “Scarface” shaking off the water after crossing the Lamar River.

But the real bear highlight of the week, and the source of unbelievable traffic jams known as “bear jams”, was the female grizzly with three cubs-of-the-year that was visible in Slough Creek for three days. She has just 200 meters from the road. Thousands of people got an opportunity to see her. We watched for a short while and then generally tried to avoid the area and the crowds. 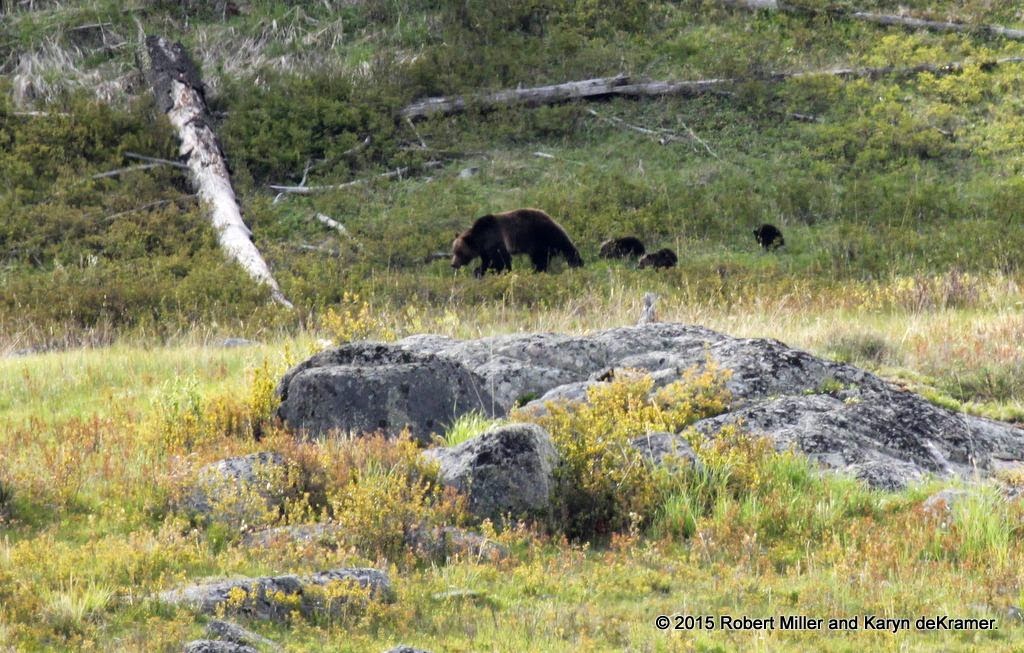 The Tower Falls area continued to be the go-to place for black bears. At least three family groups of bears were using the two mile stretch of road. On our first day in the park we observed the family group consisting of a female and two “second year” or “yearling” cubs, one of which was a cinnamon (i.e., a brown colored black bear). 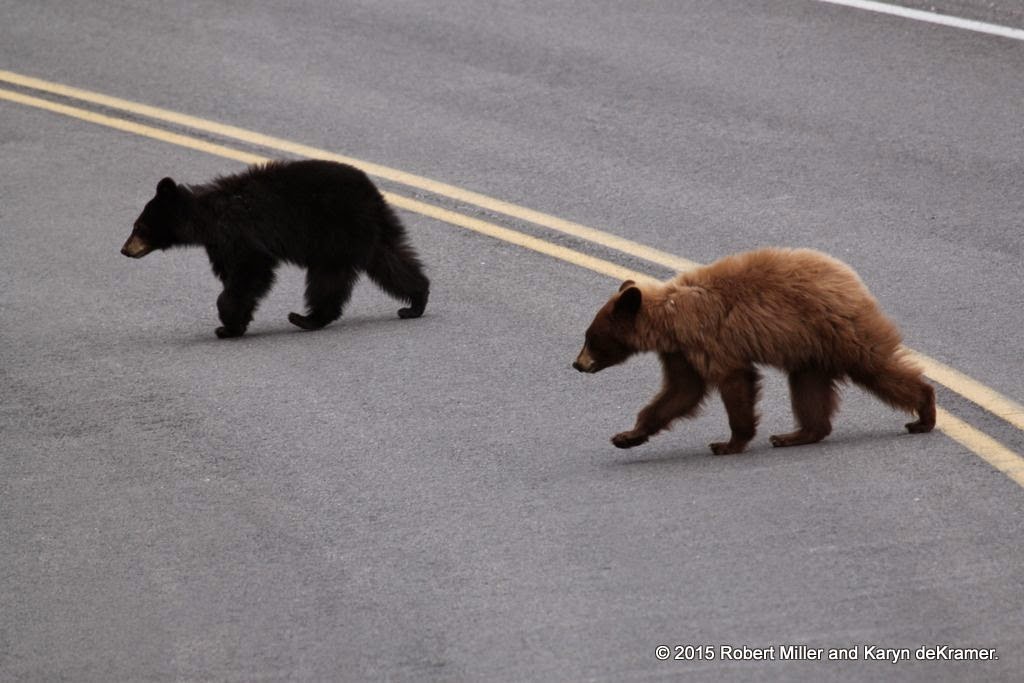 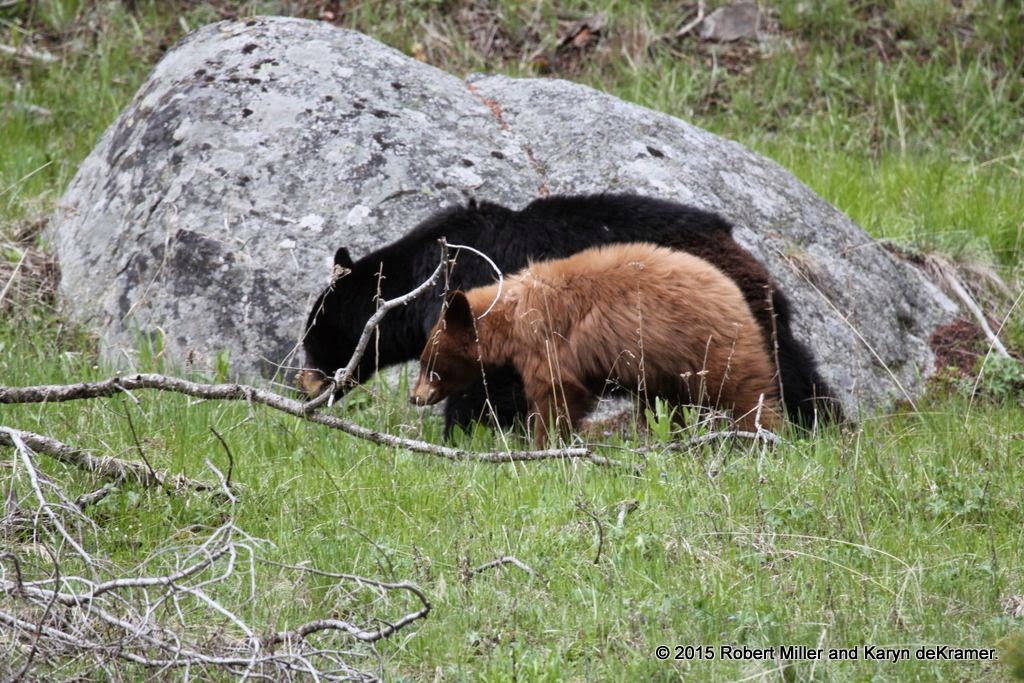