June has once again brought me into the Minidoka Ranger District of the Sawtooth National Forest to study the Northern Goshawk. This year I am joined by a new intern from University of Wyoming who will assist in all field activities and be leading his own research into the genetics of the birds.  Kenny is investigating the bio-geographic distribution of certain haplotypes within the mitochondrial DNA of the birds. This work builds upon work that my 2014 intern Steph performed last year and of other prominent goshawk researchers (Bayard De Volo et al. 2013). We will also be working alongside the Forest Service wildlife biologist and other volunteers.

We have just returned from the first week and a half in the field. We have had great success in finding new territories, new nests, and new birds. Most of the occupied nests we have discovered have had three nestlings, leading me to believe that productivity might be slightly higher this year than in years past (usually averages around 2.4 nestlings per nest). We will have to wait for all of the results to know for sure. 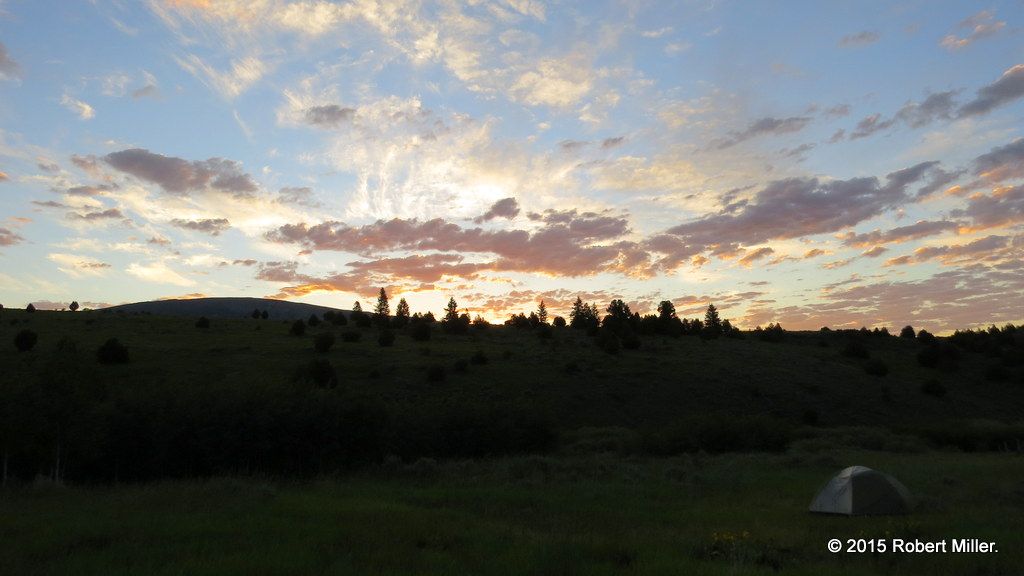 Our survey work operates in stages. The first stage consists of checking the status of all known historical nest structures. For many historical territories, we find the birds occupying one of these nests. If not, we survey the area within one mile of these structures by broadcasting the call of the goshawk in an attempt to solicit a response, what we call a detection. These call points are spaced 300 meters apart in suitable habitat. This can result in up to 40 call points per territory which can require days of effort to complete. With 45 historical territories, this can be a great deal of work. However, once we get a response, we stop the survey of the area and move to the next step. 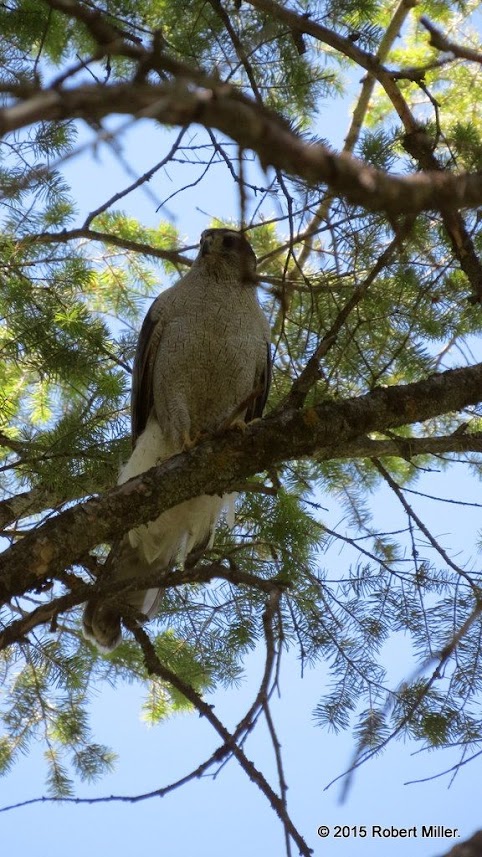 Once we have a detection of a local bird, we begin searching for the nest. This too can take some time and requires properly interpreting the response of the bird to the call. Is the bird defensive of the area, indicating a nest may be nearby, or did we simply surprise the bird while it was out hunting, in which case it usually flies off. Did it approach silently, most often male, or did it call remotely, most often female. Does it get more aggressive when you move in a certain direction versus others. 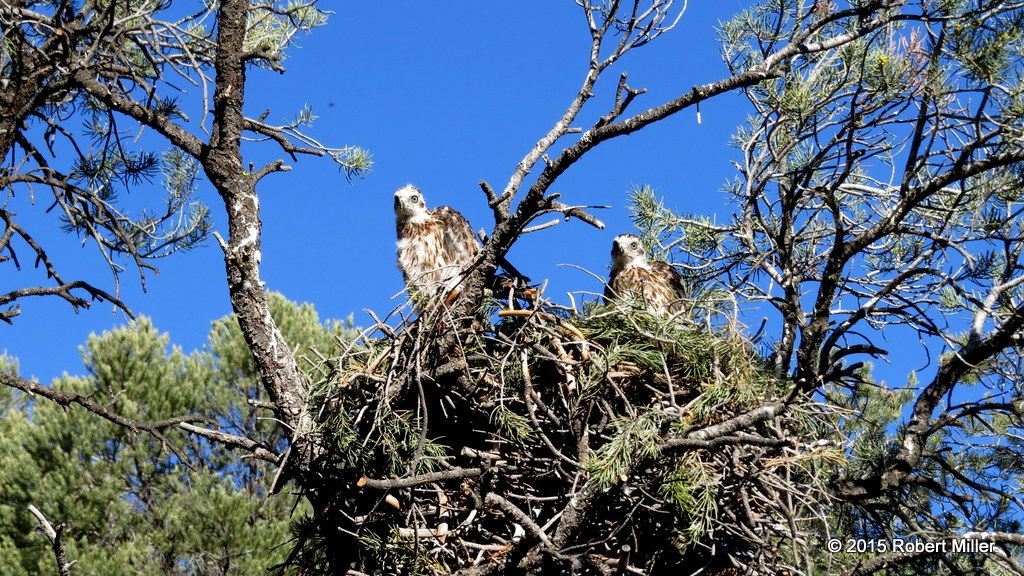 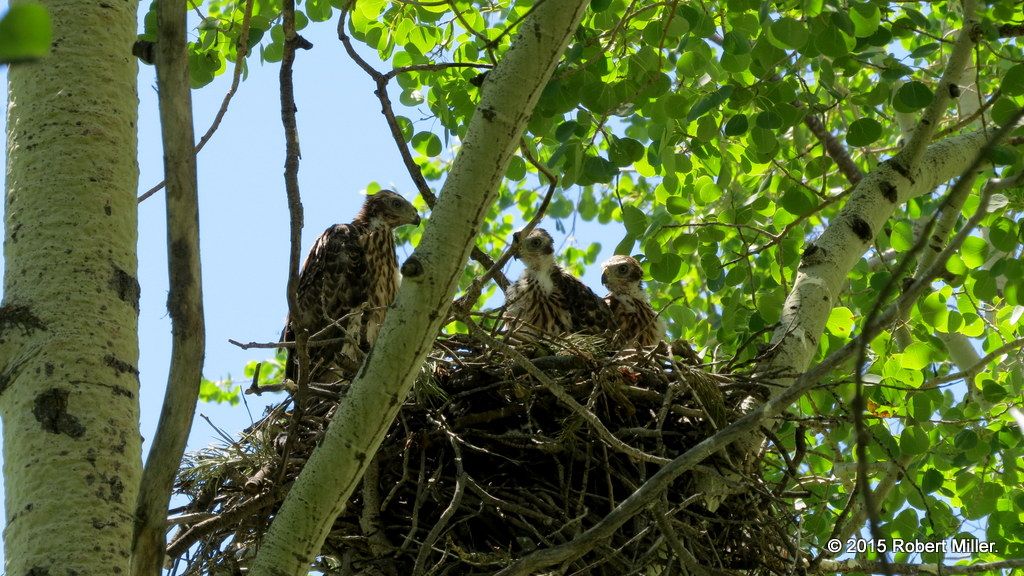 Upon finding the nest, we approach quietly to minimize disturbance, try to ensure that it is occupied, identify the number and age of the nestlings, and to look for molted feathers on the ground for DNA analysis. We are often successful in collecting samples in this minimally intrusive way.

If we have not sampled the nest previously, if we fail to find a molted feather on the ground, or if banding of the nestlings is justified, then we must climb the tree. In some cases the tree is not safely climbable, but many are. Kenny and I have each climbed one tree so far this year. 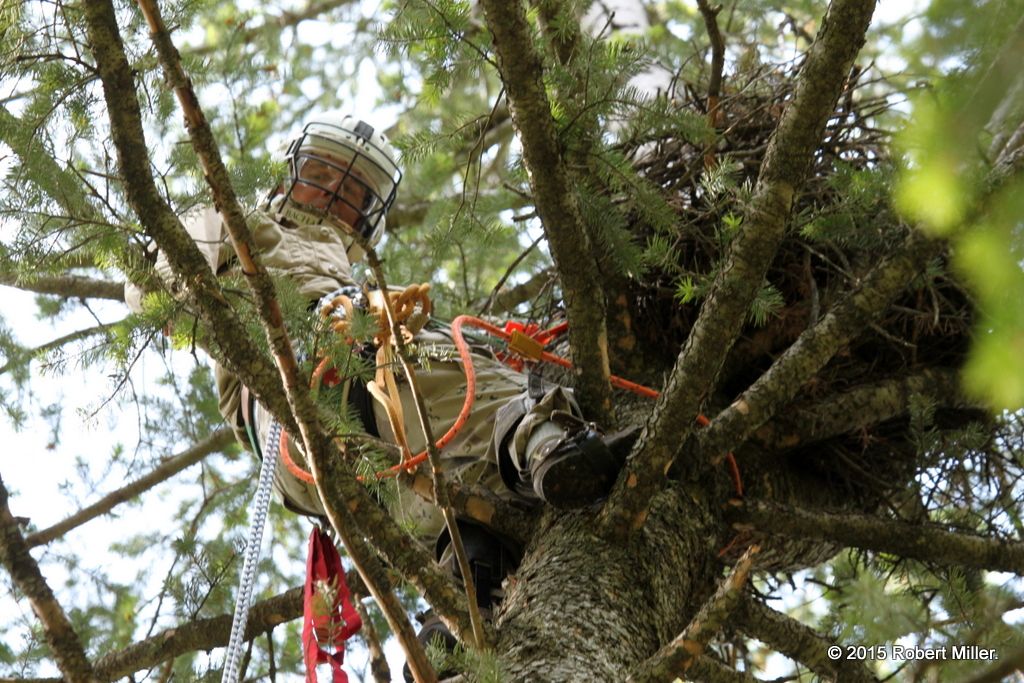 Rob (me) in a Northern Goshawk nest n a Douglas Fir tree.

If we are only banding the young, that is often performed in the nest. However, for genetic sampling, we often lower the bird to the ground to be processed. It is safer for all involved. We fit a sleeve over the bird to protect the wings and lower one at a time to the ground in a bag. 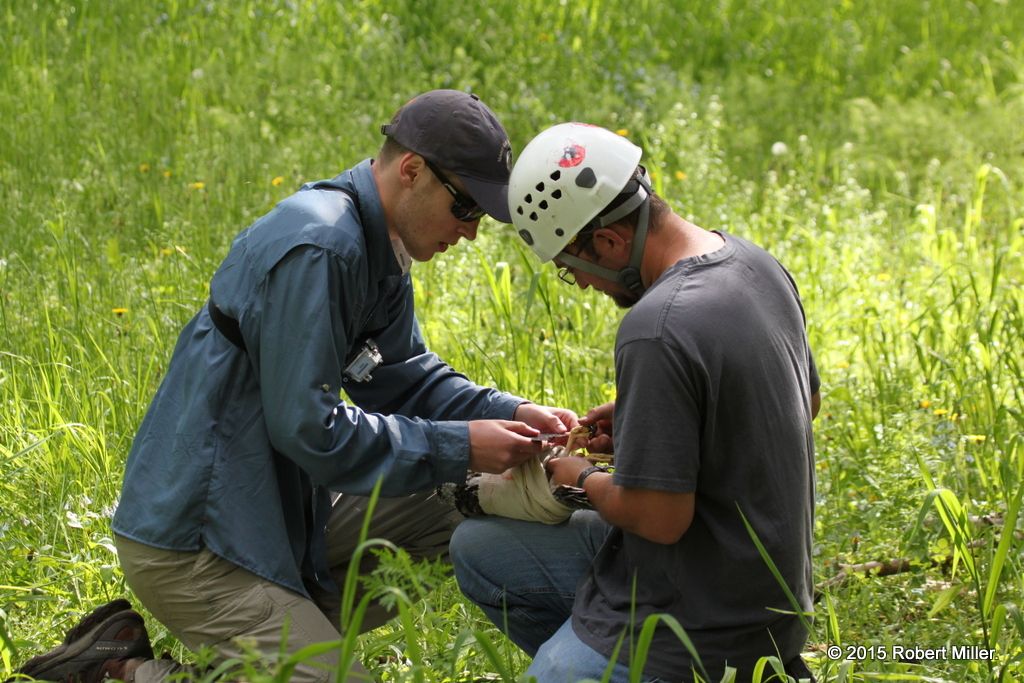 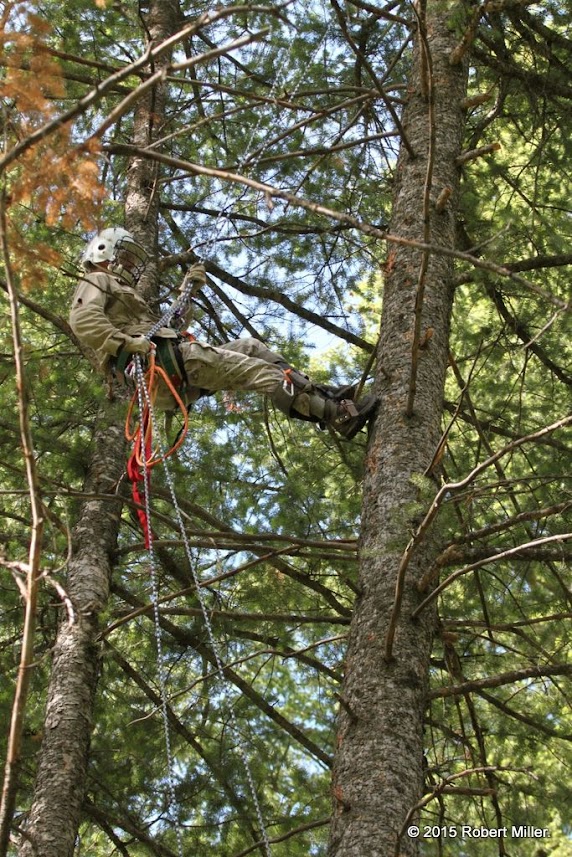 Rob (me) rappelling out of the tree.

I should note that this process and level of disturbance requires proper training, a federal permit, a state permit, and an Institutional Animal Care and Use permit, all of which require justification that the research is worth the impact on the individual birds. The goshawk is considered a sensitive species by the USDA Forest Service and a local Management indicator Species (MIS) for the Sawtooth National Forest. This is why we study them and why we must be conservative with our level of impact. We work hard to minimize the disturbance. The goal is to limit total disturbance to less than a hour. 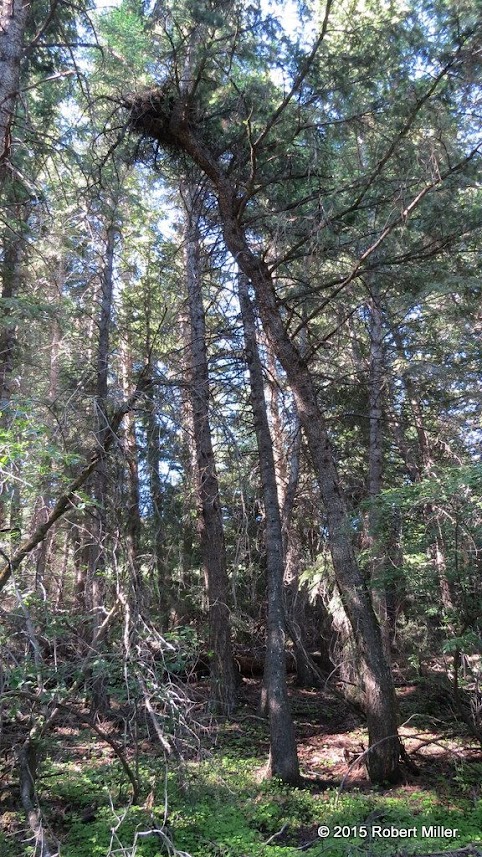 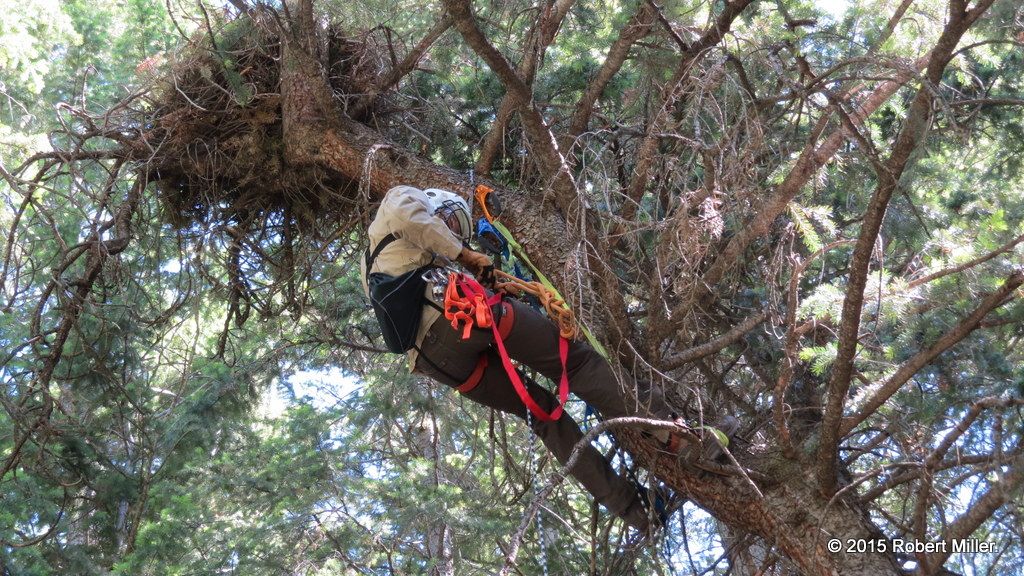 Kenny ascending the rope to the nest. 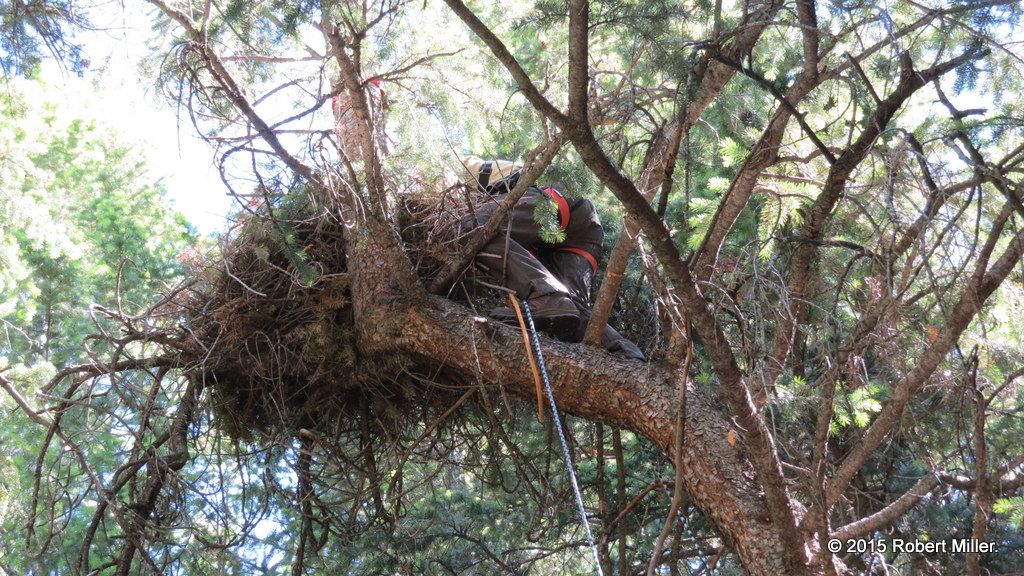 Kenny approaching the nest to band and collect a feather sample for DNA. 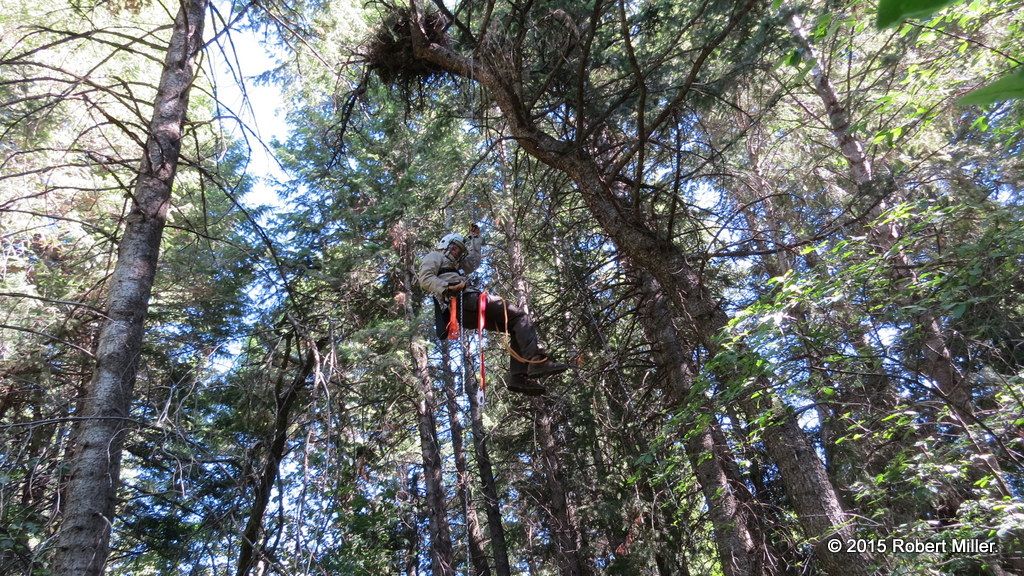 Kenny rappelling out of the nest. Success.

Sometimes when we play the call of the goshawk, other species respond. For large birds, resident Red-tailed Hawks, Common Ravens, and Great Horned Owls often respond. Of the smaller birds, Mountain Chickadees, American Robins, and many woodpeckers can also respond. If there are tree squirrels in the area, they too join in. 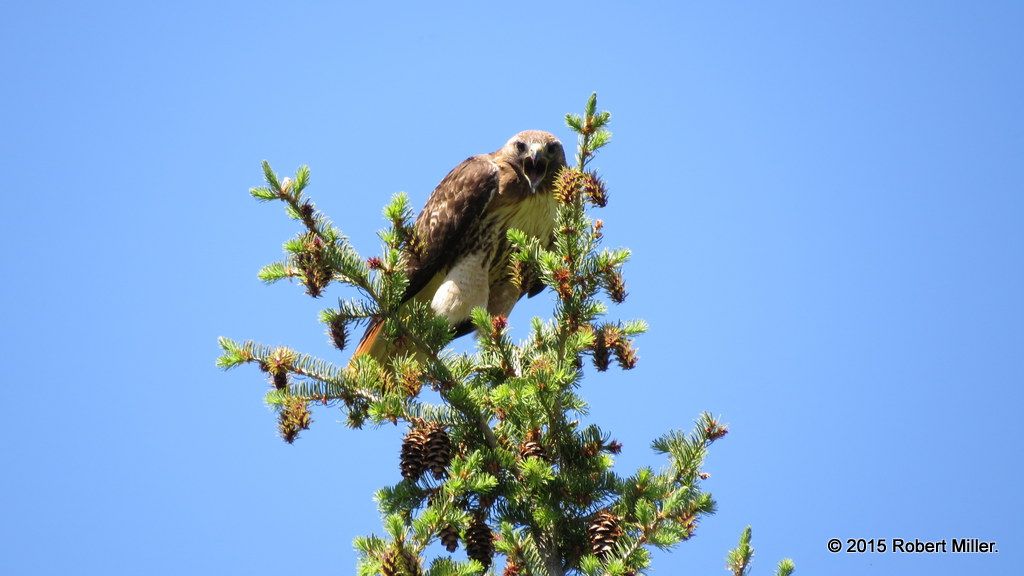 Red-tailed Hawk unhappy about our presence.

While in the woods we get to observe many unexpected things, both positive and negative. From this recent trip, the most disturbing and outraging observation was to find more dead birds in a water storage tank that I reported last year. Last year we saved an adult male goshawk from death in this tank (story here). Apparently my report got passed around to the responsible party and they made a half-assed attempt to resolve this issue by placing a mesh picnic table vertically on the side of the tank. I can confidently say that their counter-measure was completely useless. I was once again shaking with rage upon making the discovery. I have alerted the authorities and pressed them for a more thorough resolution to the matter.

Other downers from the woods are the beer cans, balloons, and other garbage which is now pervasive across the landscape. It is difficult to walk a 1/2 mile through the woods without finding garbage. We as a society must do better.

Turning to the positive, wildlife! More time in the woods means more opportunities to view awesomeness. While not as awesome as a goshawk, a Short-tailed Weasel (a.k.a. Ermine) is pretty darn close. BTW, I have video evidence that goshawks do eat these guys… 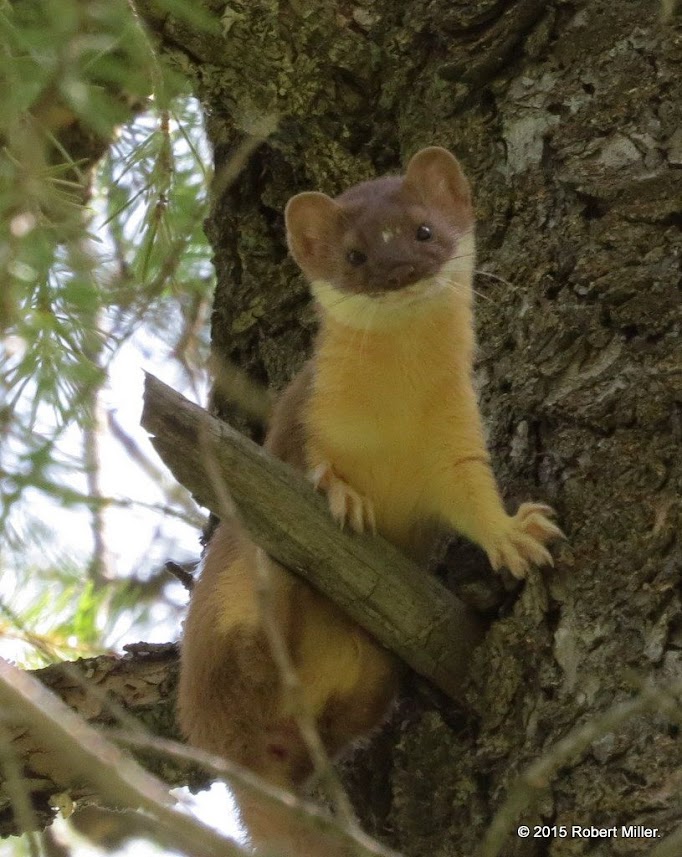 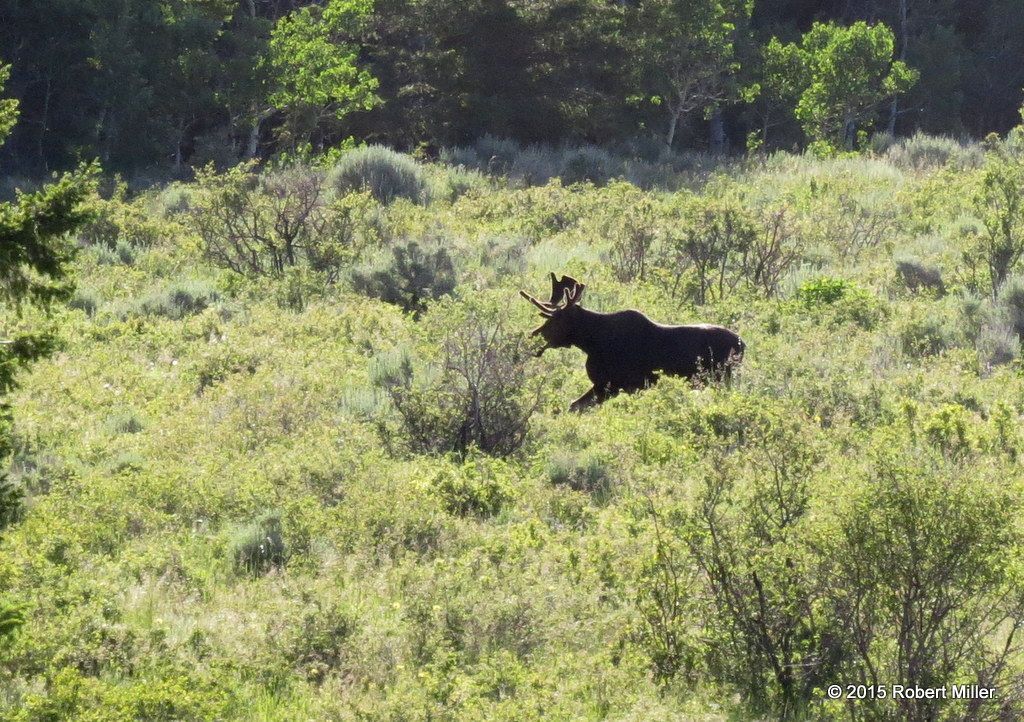 We have seen numerous deer fawns, elk, and moose. Kenny even found a recent Mountain Lion killed deer fawn, half buried. He said that he chose not to stick around!

We have a few days off before we are back to the long, hard, and wonderful days in the woods. My friend and mentor from Spain, Alejandro, arrived last night and will be joining us for the next round of work (Tengo que practicar mi español!). I can’t wait to get back out there!