Last week I was scheduled for only a single day in the raptor trapping blind at the Intermountain Bird Observatory’s Lucky Peak station (some weeks I get two or three days). Gusty southeast winds made for a slow day (as predicted by my previous research manuscript – Miller et al. 2011). We only trapped six raptors in eight hours. Not bad, but this is peak season and we should be getting at least 20 birds a day. But you can’t argue with the wind… Believe me, I’ve tried!

While it was a slow day and we didn’t trap any “sexy” birds (e.g., Northern Harriers, Peregrine Falcons, Golden Eagles, etc.), we did process two birds that presented some unique points of interest. The first was a hatch-year female Cooper’s Hawk that was banded back in August. A local! Cool! One of the main points of banding birds is to get reports from recaptures which help us to understand the movement patterns of the birds. What made this bird interesting, beyond the re-capture which we always celebrate, was that it was adventitiously molting two tail feathers – Right R1 and R2. This suggests that something, possibly a predator or mobbing bird trying to defend itself, got a hold of the tail and pulled out two tail feathers. When a full feather is pulled out (versus broken off), most birds will adventitiously grow a replacement without waiting until the annual molt cycle (which would be next summer for this bird). These adventitious feathers can be interesting, especially on birds, like this one, that are currently in juvenile plumage, but their next molt will be in adult plumage. The feather can come in as juvenile, adult, or even in between. The feathers of this bird appears to be fully in juvenile coloration (which I would expect just four months after hatching). 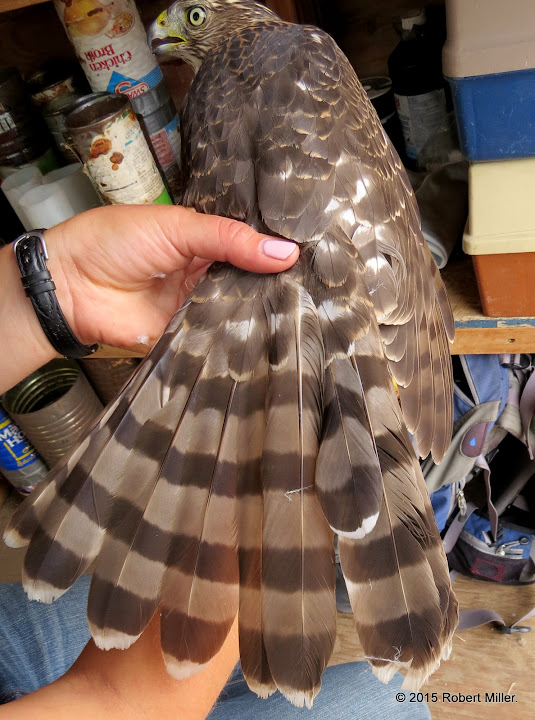 The second interesting bird of the day, was an after-hatch-year female Cooper’s Hawk that weighed 500 grams (sorry, didn’t take a photo…).  At 500 grams, this bird is in the 94th percentile for weight among female Cooper’s Hawks that we have banded along the Boise Ridge.  Impressive! Furthermore, this bird was nearly complete with it’s full body molt, hence the after-hatch-year age instead of the more specific second-year or after-second-year age classification (we need two ages of feathers present to assign a more specific age).  We do catch many birds that fall in this age category, but most (~2/3) come later in the season. I suspect the bird was a second-year bird judging by the color of it’s eye, but we are not allowed to use eye color to age at this level of detail. The conclusion: this particular bird must be a very good hunter. Both the weight and the progression of molt indicate that this bird was much more successful than most.

Research has shown in raptors, and in Cooper’s Hawks specifically, that larger females have greater lifetime reproductive success and their offspring are recruited into the population at a higher rate (Curtis et al. 2006). This bird appears well prepared for the next breeding season and for the years after that. Poor body condition can take years to overcome and most are never able to recover. Great body condition, leads to less expensive migration, greater over-wintering success, less expensive return migration, and ultimately better eggs next breeding season. The chain continues.

Did she breeding this year? We have no way to determine that, but it is possible that she did not breed this year, thus enabling her to grow her personal resources for the future. Many second-year birds do not breed. This brings up a good research question – what is the better strategy – breed early resulting in more years of breeding, or build resources, thus increasing success in later years. To my knowledge this has not been studied in Cooper’s Hawks, but studies in other species have found the lifetime reproductive success to be similar between the two strategies. If there was a strong advantage one way or the other, evolution would likely instill that strategy within the population. Cool stuff to think about. I can’t wait to get back up there on Thursday (although another day of SE winds are predicted…)!

Thanks for the post, it is interesting to hear what goes on in the blind.