Nature, Nurture, Environment, or All of the Above?

Wow, another Northern Goshawk field season is beginning to wrap up. How does it go so fast? The Intermountain Bird Observatory’s Team Goshawk 2016, led by me, has been busy with many expected and unexpected discoveries. As with the past two years, I am once again hosting a National Science Foundation funded intern. My 2016 intern is Lauren Whitenack. She has been a great team player, putting up with me for the past month in the field. Be sure to check out her blog for her personal view of these adventures: Wild Life.

One of the reasons I like fieldwork, is that it presents many mental challenges to try and figure out. While walking through the woods, I like to think about the roles of various plants and animals, how they evolved to be who they are, and why they are so different from each other. In some cases, these mental challenges may lead to formal research questions. In other cases, it may just be an interesting thought exercise. For example, one that I have been bouncing around in my head for years, is why are Common Ravens, that sometimes nest in similar habitats as goshawks, able to be so loquacious or noisy in the nest, whereas, goshawks which seem better able to defend themselves, have evolved to generally remain silent. Is anyone interested in a behavioral evolution study? 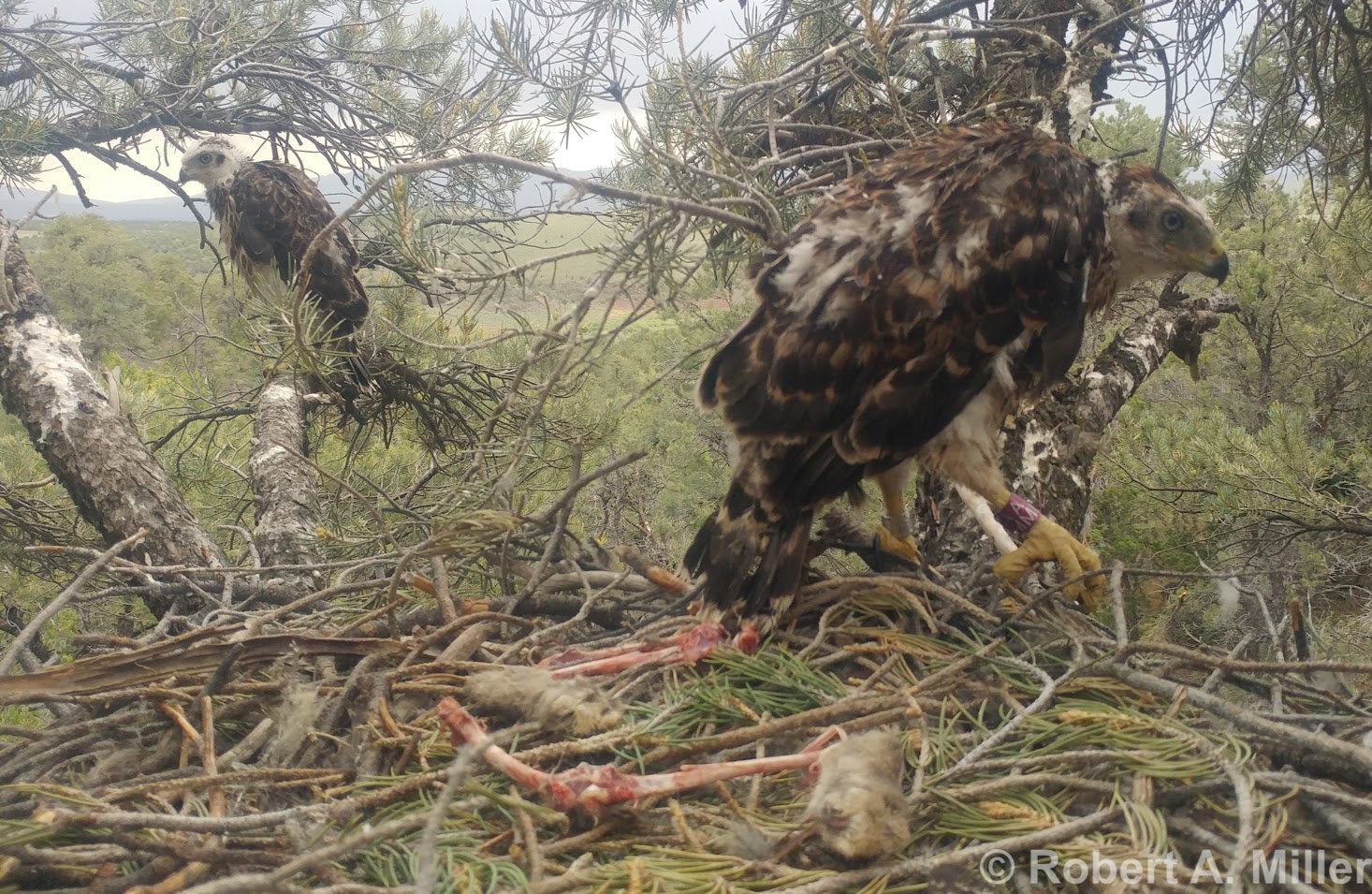 Newly banded nestling goshawk Female AM (right) amidst jackrabbit prey remains in the nest. The first evidence I have of breeding season use of jackrabbits. The nestling on the left remained out of reach for banding.

Another one of my age-old questions rolling around in my noodle pertains to the intensity of defense behavior exhibited by different goshawks when an intruder, typically me, enters their domain. Some goshawks are prepared to give their life in defense of their young while I may still be 50m from the nest. Others simply sit silently, or even more passively, fly out of the area leaving the nest behind. What factors influence these decisions and why the different approaches?

A great deal of research, of which I am not an expert, has focused on aggressive behavior in various organisms, including humans. Is aggressive behavior dictated by nature (i.e., encoded in our genes), influenced by nurture (i.e., parental up-bringing), or by environment (i.e., events and conditions around the organism throughout its life). If only it were that simple... We biologists like to put things into simple little categories, but it rarely works out. Well, I say the answer is - all of the above!

Here I will tell the tale of three different goshawks or family of goshawks, with differing levels of aggression, that may support my hypothesis for all of the above. Furthermore, it is generally agreed that goshawks in North America are on average more aggressive than their European counterparts. This, in and of itself, is not well understood, although a number of hypotheses exist.

Part of my research involves color marking goshawks (with 2-digit purple color bands) to keep better track of breeding bird turnover and recruitment. However, like humans and other animals, these birds have unique personalities that in many cases allow me to be reasonably confident in the continued persistence of individual breeding birds, without having to read the bands. In my opinion, anyone who does not believe that birds have emotions and personalities has not spent much time getting to know them. Confirmation of identification via the color band definitely increases our confidence. 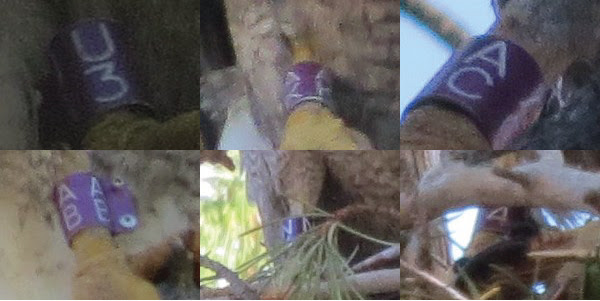 Photos of color bands I took while resighting previously banded birds during the 2016 field season. 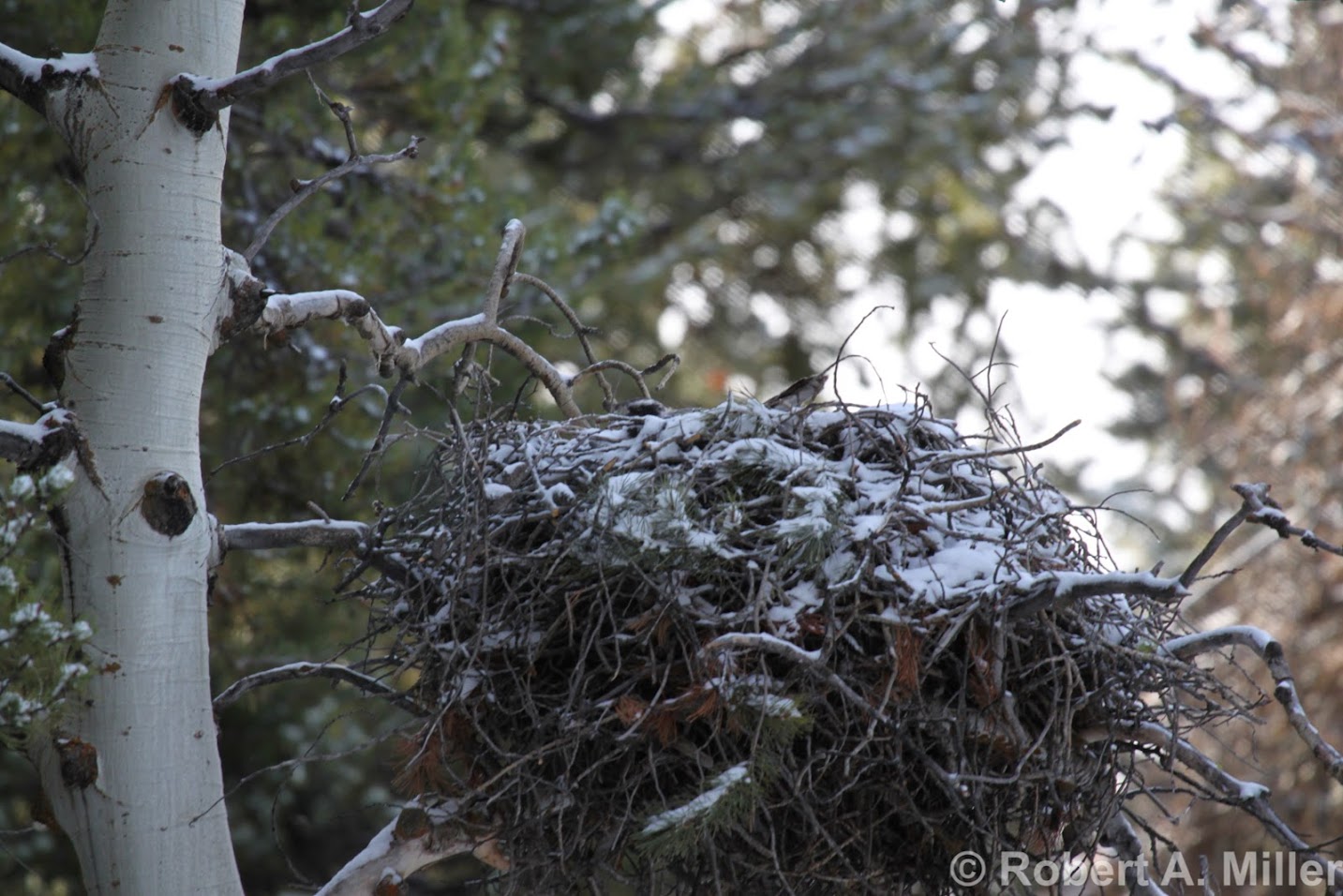 Female 9Z occupied a nest within 50m of the busiest campsite within the busiest campground within my study area. She nested in the same tree for years. Clearly she was well adapted to disturbance as the summer brings non-stop ATV and motorcycle noise from dusk until dawn. We know from other studies that even birds that are well adapted to disturbance, still suffer lower productivity as a result (Strasser and Heath 2013), yet she returned year after year. I don’t know her productivity over time, but her final two years in the area did result in below-average success. There are many interesting questions that this raises? What was the advantage she saw in the area? In a world of increasing noise and disturbance, is there an evolved adaptation to be more tolerant? Was she tolerant of disturbance upon arrival, or did she grow accustomed over time? 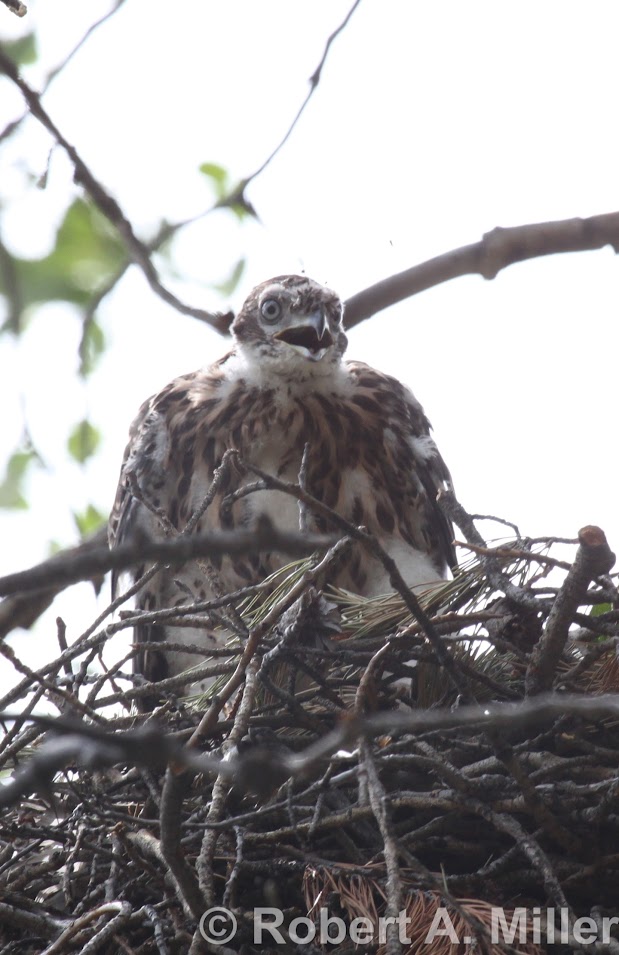 Female 9Z was very calm. She never attacked and never flew out of the area when we visited. I twice climbed her nest tree to band her nestlings (in 2011 an 2012). On one occasion, she didn’t even issue an alarm call until I was 10 feet off the ground. She never left her perch. In 2012, I banded her single nestling Female Z3 within this nest. I have later found Z3 breeding (2014, 2015, and 2016) in a neighboring mountain range. She is just as calm and collected as her mother was, yet she is nesting in an area very isolated from human disturbance. Is her calm demeanor the result of nature (i.e., genetics - calm mother = calm daughter) or the result of nurturing (Z3 observed the calm demeanor of 9Z in the nest and learned or not over-react)? Their two environments could not have been more different, so probably not a string influence in this case. Very cool questions indeed! 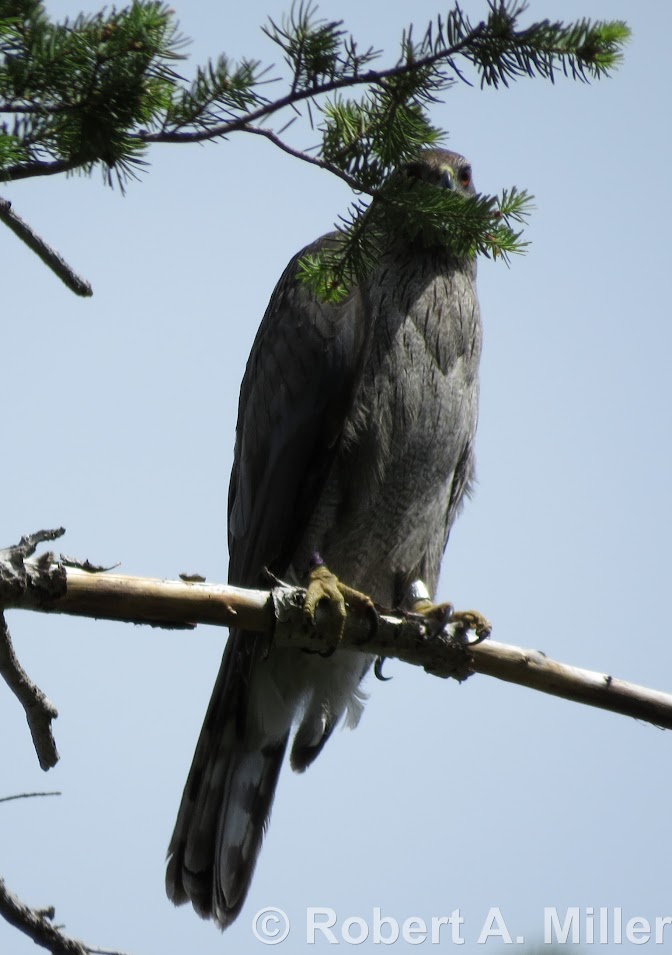 I have an unbanded female in one of the territories I monitored that I am fairly certain was the same female for four years in a row. During 2011, I visited this nest once a week to check on the nest status. In each case the female carefully watched me enter the territory, do my status check, and then leave. She never protested, she never flew off, she never attacked. 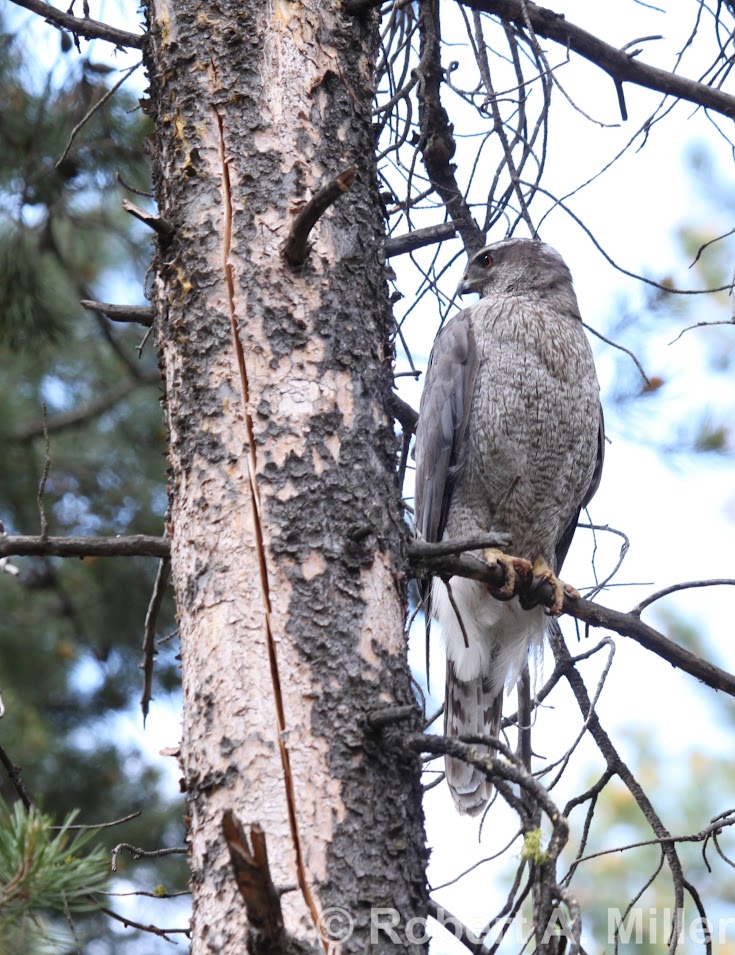 In 2012, I once again returned to the area on a weekly basis to the same general response. That was until I decided to climb her nest tree to install a video camera as part of my diet study on this species. This action apparently crossed a trust barrier that we had in place. A trust that I had broken. She would never forgive the intrusion. This female transformed from one of the most calm individuals to the most defensive goshawk I have ever met. My intrusion had changed her world view. This aggressive behavior lasted for the two additional years with which she was breeding in the area. She may have had a predisposition to aggressive behavior (via nature or nurture), but it took a trigger to engage (environment). This environmental trigger had a long-term affect on the individual. I think about this bird, and my impacts upon her, before I initiate any action within my goshawk studies. Knowing that we have a long-term impact on individuals is not something I am completely comfortable with. I also use the knowledge of this situation to better interpret other behaviors. For example, I now know that environmental conditions can change behaviors. When I find an aggressive bird, I often think about what kind of other triggers that the bird may have experienced.

In contrast to case #2, Female N4 is another bird I have grown to know well. I, or one of my field technicians, have climbed her nest tree on three occasions over the past six years to band her young. We have also captured her for banding in 2014. This is a very high amount of intrusive behavior. However, in contrast to case #2, this female has not grown more aggressive. If anything she has become more accepting. This year I found her perched on the rim of her nest. I spent ten minutes walking around within the stand gathering habitat data for a new study that Lauren is leading. She never took her eye off me, but also never flew, protested, or attacked me. I spoke to her with admiration and respect, apologized for the inconvenience, wished her well, and left the area as soon as possible. Clearly the same environmental factors applied to two different birds, produced different results. Nature? Nurture, Environment, or all of the above? Yes! 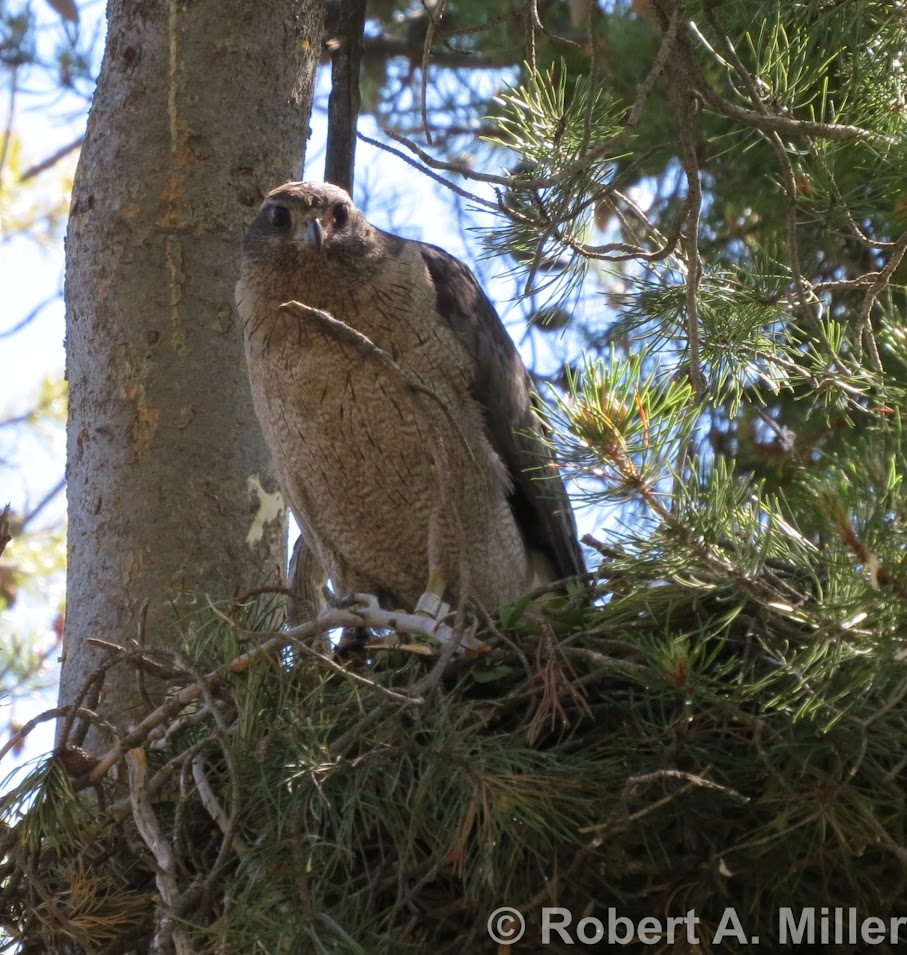 Yes, I talk to birds. I believe that birds are capable of reading our emotions, at least to some extent. When handling birds, if you are calm and confident, the bird will be more likely to be calm. Sure, they do want to get out of your grip. However, the same bird will be more calm with an experienced bander than with a nervous bander. I talk to most of the birds I handle in the off chance that speaking calmly and slowly somehow reduces their stress, if just a little.

We may never know what really goes on in the heads of these birds, but I will continue to admire them for their grace, calm beauty and for the ferocity. I will also continue to believe that they, like ourselves, are influenced by many factors including nature, nurture, and their environment.